The KitSound Funk 35 earbuds don’t differentiate themselves much from the sea of competition on Amazon, and various other retailers. But by getting nearly all the basics right, they're more than good enough to keep most casual listeners happy. The only downside is that, for a little more money, there are slightly better sound sets available

The KitSound Funk 35 are one of many affordable true wireless earbuds to flood digital stores ahead of Black Friday.

Retailing for £50, these buds are about the cheapest you’ll find from a name audio brand outside of the even cheaper KitSound 25.

Despite a few niggles, for the most part the KitSound Funk 35 are great-value true wireless in-ears. The only issue is that the jump in audio quality you’ll get by spending £40 is palpable.

The KitSound Funk 35 design – A compact and snug fit

If you’re after a small-form-factor, pocketable set of true wireless that don’t break the bank, then the KitSound Funk 35 are among the best you’ll find at this price, from a design perspective.

They come in a dinky square charge case with rounded sides; it’s about the size of a normal jewellery box for rings. The case has a matte plastic finish that’s blissfully free of any extravagant design flourishes, except for the small KitSound logo on the bottom right corner of the lid. 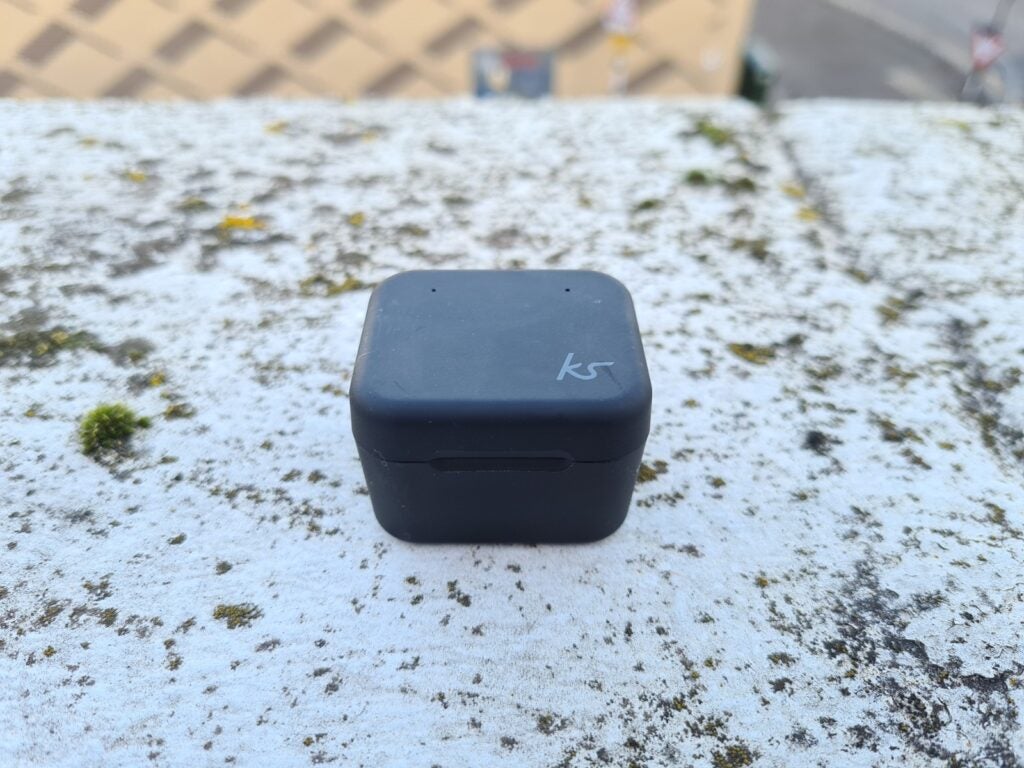 The case is well made and the perfect size to fit into most pockets, handbags and satchels. It’s also fairly well built and suitably scratch-resistant.

In addition, it holds a surprising amount of charge for its relatively small size, with KitSound quoting 18 hours worth of juice. With the buds six-hour quoted battery life, it means that theoretically you can get 24 hours worth of music listening with both case and earbuds fully charged – which isn’t to be sniffed at. With real-world use I found the buds generally managed to last a full work day, with sporadic listening breaks, before requiring a top-up charge.

The only downside is that the Funk 35’s case charges using a fairly old-school micro-USB input. In this day and age, I’d have liked KitSound to have made the jump to the newer USB standard, but this is a common issue with most such earbuds at this price. Nevertheless, having to use a separate cable to charge your phone and earphones is super-annoying. 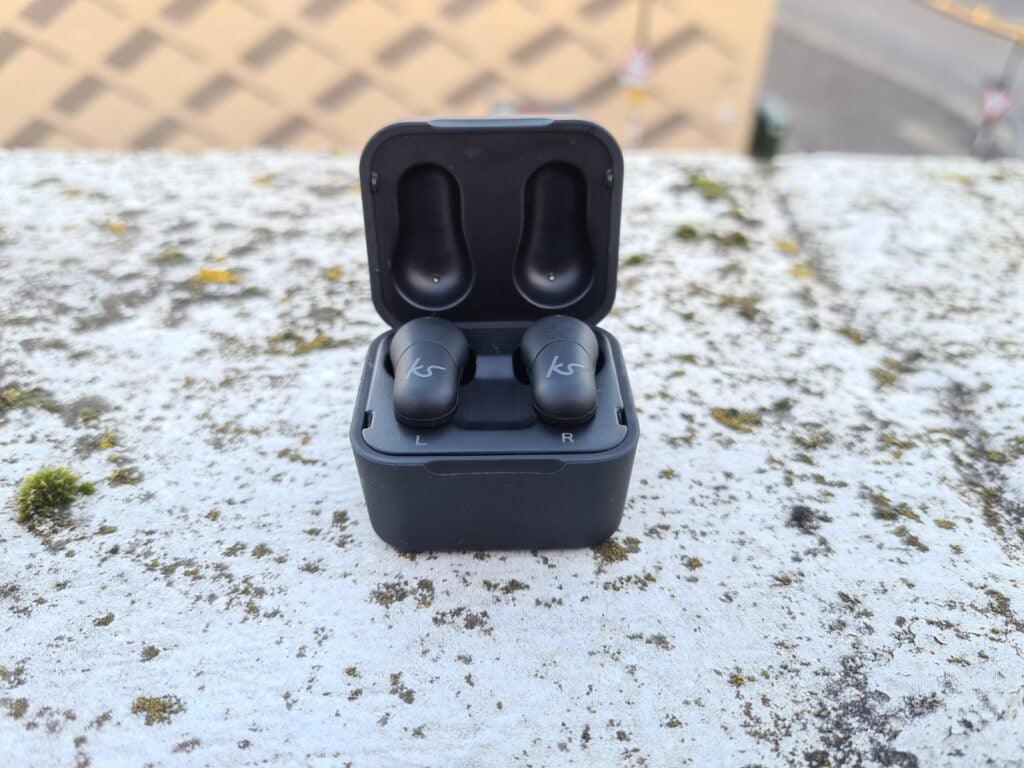 The buds themselves are equally utilitarian. They look like stripped-down versions of the regular AirPods, or TicPods 2 Pro, sporting a basic black colouring and a shaft, electric toothbrush tip-like design. The only difference is that the shaft section is slightly shortened.

Functionally, the earbuds perform well. They’re light enough to sit comfortably in your ears once you get the right tip size, and I’m a big fan of the fact they have physical, not capacitive controls. Each bud is home to a physical button on its shaft. The buttons can be used to take calls, pause/play music, or skip tracks using various combinations of presses.

The system is far more reliable than the capacitive systems I’ve tested on other affordable true wireless earphones, such as the Edifier TWS6, which have a tendency to go a little haywire, especially if used outside in the rain.

The IPX3 certification means the KitSound Funk 35 can be used in the gym, although the lack of wing tip options means they’re certain to dislodge from the ears during more energetic workouts.

Sound-wise, the Kitsound Funk 35 don’t come with any of the advanced features you’ll find on more expensive sets. There’s no ANC and the aptX codec isn’t supported. This shouldn’t surprise at the price, however.

What you do get is a “bass friendly” sound. The reality is that £50 true wireless earbuds are never going to blow your socks off when it comes to audio quality. But, for the money, the Funk 35’s do a reasonable job that will please casual listeners.

The sound is fairly warm, which isn’t surprising given KitSound’s “bass friendly” description. The low end isn’t terribly precise, and if you listen to complex classical arrangements or multi-layered post rock, then you’ll lose a lot of the track’s subtle details – but, again, that’s part and parcel of all the sets I test at this price.

With those caveats in place there are some positives to note. Despite the warm sound, highs are reasonably well handled. Eighties rock guitar and jazz piano keys display a reasonable sparkle, and although they’re overshadowed by the flabby low end, mids are discernible and hold a place in less complex rock and pop tracks. Listening to Sly and the Family Stone, the funk guitar managed to sound suitably separated from the slap bass section. 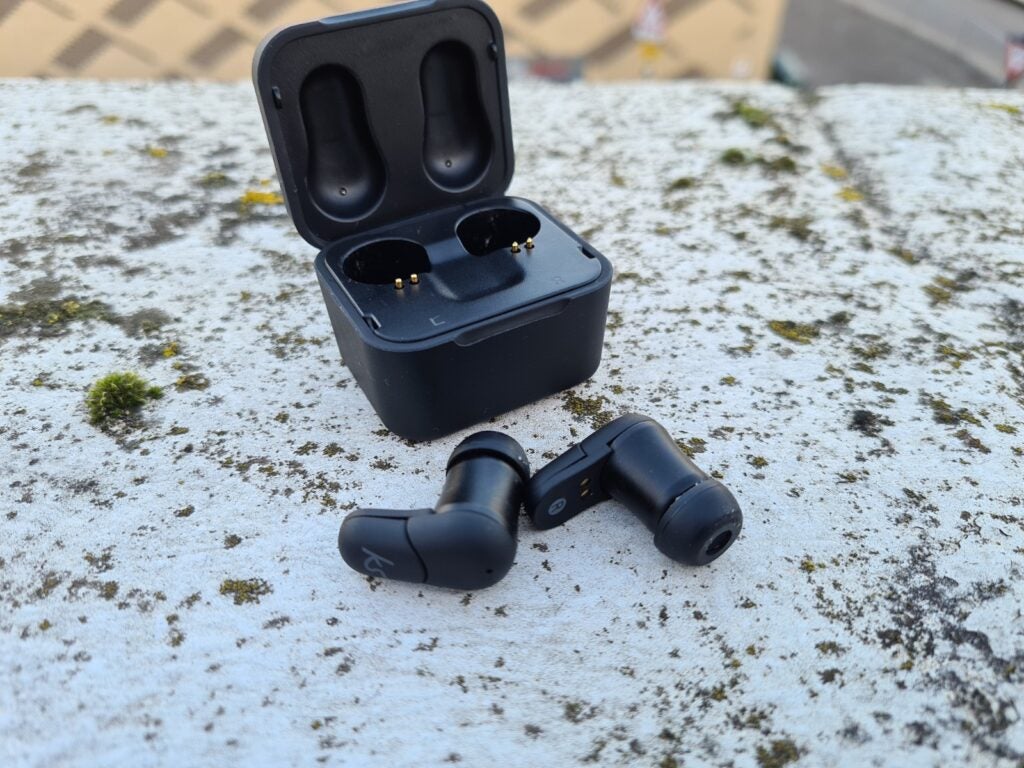 Mids can sound a little nasally, but not to the point that tracks sound unlistenable, as they do on most sets this price. Dynamism isn’t as impactful as more expensive sets, but you do still get a swooping feeling during crescendos and some impact during breakdowns – two factors most other cheap sets lose in their entirety.

The only other real downside is that, like nearly all the affordable sets I test, at high volumes sibilance and distortion begin to creep in.

Again, all this is par for the course for earbuds at this price, and forgivable considering the fact that you really can’t do much better for the money. The only point worth bearing in mind is that if you do jump to the next price point, the difference in quality is palpable.

If you can stretch another £30-£40 then sets such as the Edifier TWS6 mentioned above offer significantly better balanced audio, despite feeling and looking a lot cheaper than the Funk 35. However, that’s a significant 40-50% jump in cost, which may be beyond the reach of those on very strict budgets.

Should you buy the KitSound Funk 35?

The KitSound Funk 35 are a competent set of true wireless earbuds considering their super-low price. For the money you get a compact, well-built set of in-ears that will be more than good enough for most casual users.

But their audio quality again holds up to the age-old adage that you get what you pay for. If you’re able to stretch your budget to the next tier then there are better-sounding sets available.