The Edifier TWS6 don’t do much to differentiate themselves for the competition, but by getting the basics right they earn a place as one of 2020’s most reliable budget true-wireless earbuds.

The Edifier TWS6 are a cheap pair of wireless earbuds from the American audio brand.

On paper the Edifier TWS6 don’t do much to differentiate themselves from similar buds, such as the Sony WF-XB700.

But their gym-ready design and selection of wing-tips make them a solid set of budget sports headphones.

Serious music fans will be better off paying a little more, but for most people they match, if not beat, the audio quality of competing sets at this price. The only downside is the slightly lacklustre touch control system.

The Edifier TWS6 are not pretty looking earphones. They come in a tall, incredibly shiny and plastic charge case with a similar finish to the Anker Soundcore Liberty Neo. The buds themselves are similarly cheap feeling, with a lightweight, plastic design that makes them feel fairly delicate.

Thankfully, they more than make up for this when it comes to their fit. The buds come with a variety of basic and wing-tip options, and while the wing-tips aren’t in the same league as the Jaybird Vista’s, one of Trusted’s favourite sets of sports earphones, they do help you get a secure gym-ready fit. 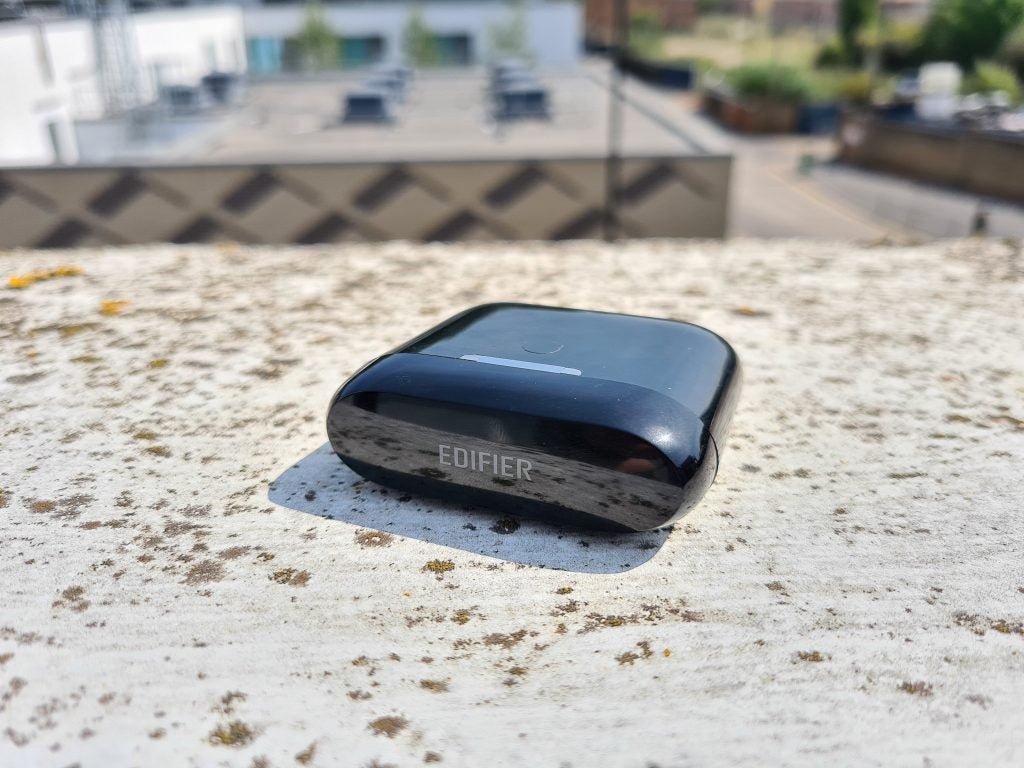 Once I’d swapped the tops to get the right size for my ears, I was able to get a solid fit and seal. Doing everything from running and cycling to working a bag, the buds never dislodged and provided an excellently tight seal for noise isolation. The seal is particularly important as they don’t come with any form of ANC, though at this price that’s fairly standard.

Outside of this they tick all the boxes expected of an affordable true wireless. The buds live up to Edifier’s quoted 8 hours listening time, and using them as my primary running and morning workout set, I generally got a fortnight’s use before needing to top up their battery – which is easy to do thanks to the addition of wireless charging. The case can hold up to three full charges at any one time.

Despite feeling a little cheap, the TWS6’s IPX5 rating means they’re sweatproof and water resistant enough to survive exposure to a mid-run downpour during testing.

The only feature I’m not completely sold on is their capacitive touch controls. I’ve never been a fan of capacitive systems for running sets as they’re never as reliable as traditional button inputs, like the ones on the Jaybird Vista. But the TWS6’s system is flaky even compared to competing sets I’ve tested, like the Amps Air Plus and Galaxy Buds Plus. 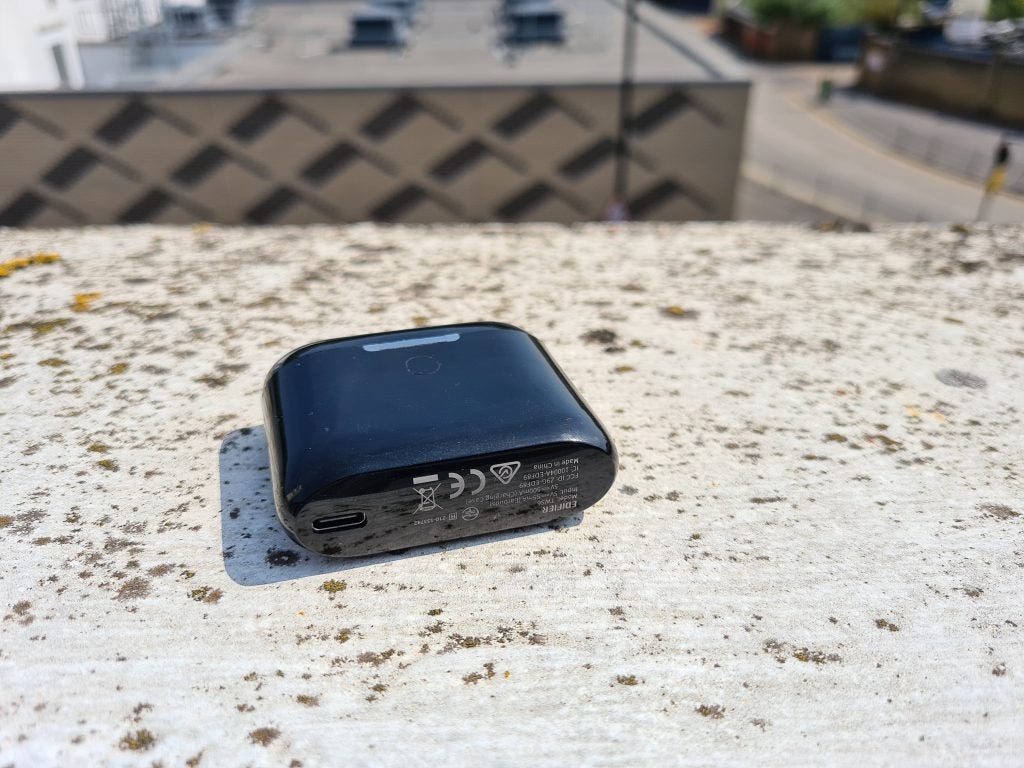 For starters they have very limited functionality. You can play/pause tracks and activate the Google Assistant or Alexa (when paired to a smartphone). However, there’s no way to skip tracks or adjust the volume, and the limitations are made worse by the fact the controls don’t work terribly well, especially with sweaty hands.

Trying to pause a track mid-run while I crossed a road, I had to hit the touch control multiple times and with more force before they responded. I had the same experience trying to get the digital assistant to launch with a double tap of the buds.

This is a shame as the Edifier TWS6’s mics are surprisingly capable. Though background noise can creep in when using them on the street, the person on the other end of the call reported hearing me loud and clear. When the feature did activate, the digital assistant reliably understood what I was asking most of the time.

Sound quality is usually the main area cheaper true wireless sets struggle. Most either oversell the low end, or suffer from sibilance and lack of detail. It’s why I was surprised at how well the Edifier TWS6 performed.

To be clear, the audio quality is not anywhere near as good as what you’ll get on premium pairs such as the Technics EAH-AZ70W. The TWS6 are not as detailed, and there are issues with the way they’re tuned if you want studio accurate audio. But, for the money, the audio is surprisingly good.

The Knowles balanced armature drivers offer immersive audio quality that’s more than good enough for gym use. Listening to rock power ballads and the bass is a little flabby compared to more expensive sets, but not to the point where it overpowered the high guitar parts or intruded on the bass drum. Vocals also felt slightly over represented, but again not to the point of it being an issue. All-in-all each part of the sound held its own distinct place. 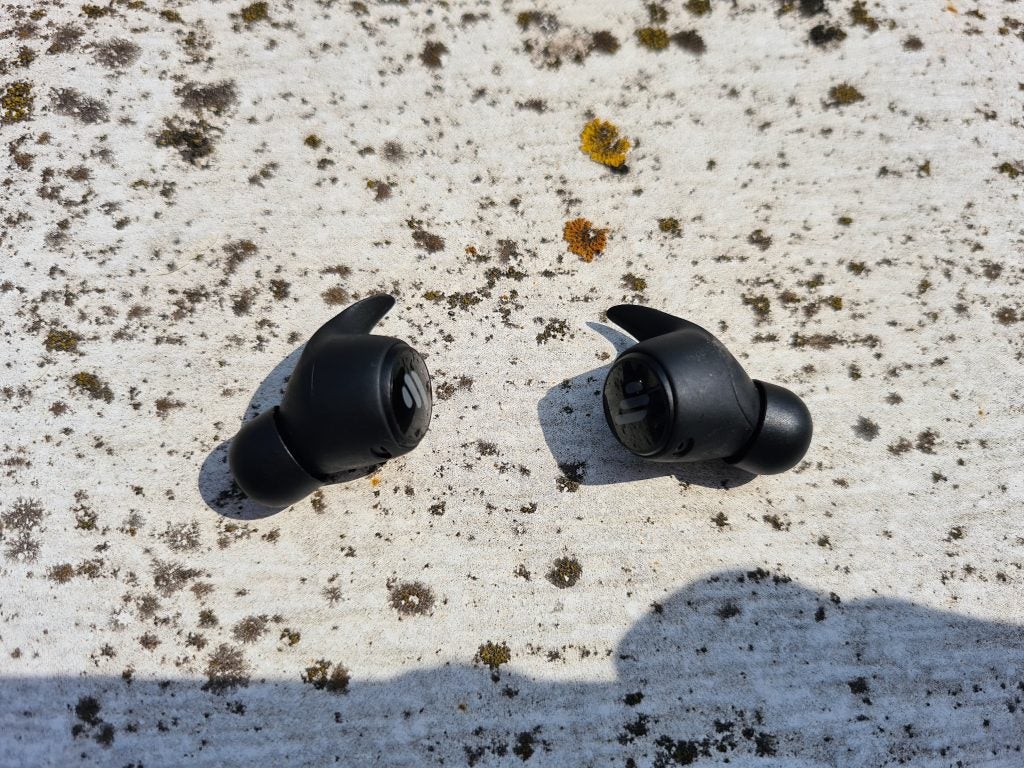 The audio felt more detailed than most competing sets, and tonal balance is among the best I’ve tested at this price.

The only downside is that at very loud volumes the midrange could, on occasion, feel a little nasally; particularly on aggressive genres like metal. Like any pair this price, serious music fans will find more subtle parts can be lost when listening to particularly complex genres. Listening to busy prog ballads, and the backing choir’s vocal parts became difficult to discern. Being fair to the Edifier though, they were still much better represented here than other cheaper sets.

Wireless stability is also excellent. They have Bluetooth 5.0 and support both aptX and AAC codecs. Given the current situation I wasn’t able to test them around Kings Cross and Waterloo station; two busy signal areas that really stress test any wireless sets’ connection. But using them around busy London streets and I never experienced any dropouts or serious stability issues.

Should you buy the Edifier TWS6?

The Edifier TWS6 aren’t going to set the audio world on fire, but as budget true-wireless earbuds go, they’re a solid option. They’re still far from perfect, featuring all but useless capacitive touch controls and a fairly cheap feeling design.

But the sound quality is good. And add to this a solid fit, decent battery life and capable mics, and they’re a solid choice for any regular runner or gym goer looking for an affordable pair of wireless earbuds.