The Note 8 has a dual-camera setup which is entirely non-essential yet extremely fun to use, while the stylus is certainly useful for many. Meanwhile, the S8+ has an easier-to-hold design and a larger battery at 3500mAh, which for many people will be the difference between making it through a full day of heavy usage and having to dig out the battery pack at 9pm. If its extra pen and camera features interest you, the Note 8 is undoubtedly a decent buy if you can stomach learning how to use power-saving modes.

Updated: check out our coverage of the all-new Samsung Galaxy Note 10.

If you’re after a big phone, with big phone features then the Note 8 is still a great choice. Thankfully, it’s a fantastic device that ticks nearly every box.

Some thought the Note 8 might never happen. After the successful launch and subsequent disastrous recall and discontinuation of the Note 7, which still gets namechecked on some airlines as a banned object, you’d have forgiven Samsung for dropping the Note name and starting again.

The Note 8, then, is supposed to be Samsung’s humble return to the phablet market – plus a big rival to the iPhone X and iPhone 8 Plus  – and in many ways this phone is a huge success. With a gorgeous design, incredible 6.3-inch screen, great software and excellent stylus, there’s very little not to like here.

In fact, the only big concern I have is that this phone’s battery life might not be long enough for heavy users.

The Note 8 is a stunning piece of design. While the Galaxy S9 and Galaxy S9+ have a friendly, more curvaceous design aesthetic, Samsung continues to nod at its business customers with slightly sharper edges and a squarer camera module. You still get the iconic InfinityEdge design where the left and right sides of the screen slope off to the side, and you get the ultra-thin top and bottom bezel to boot. I actually prefer it to the regular S phones, although others might disagree.

The whole lot is coated in Corning Gorilla Glass 5.0, and my unit lives up to its colour description of Midnight Black. It looks great out of the box, but after a little while of using it, greasy marks do begin to build up on the back. That’s not unique to this phone, and it looks far cleaner than many smartphones do after they’ve been subjected to my clammy palms. 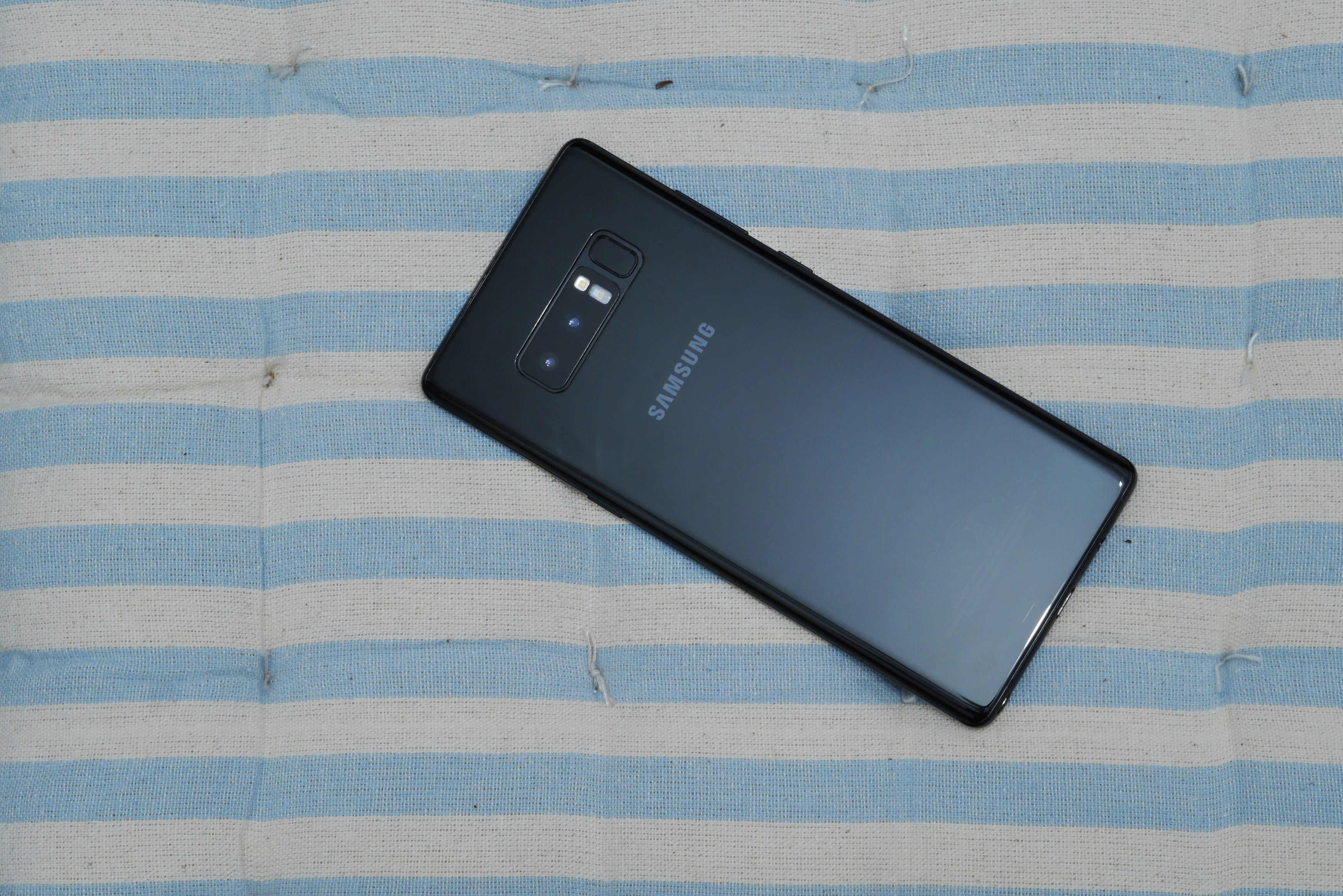 It’s hard for me to comment on the longevity of the glass coating on this device because I haven’t dropped it properly. However, experience from elsewhere tells me that even the latest glass phones won’t survive clumsiness: our mobiles editor, Max Parker, dropped the Galaxy S8 and cracked it, while my wife dropped her (Gorilla Glass 4) Galaxy A5 2017 from table height and smashed the back panel to smithereens. The Note 8 is at least IP68-certified, meaning it’s waterproof even when subjected to a half-hour submersion.

I did drop the phone a couple of inches onto my kitchen counter at one point, and later laid it on a slightly rough stone table, and it came away without blemishes, as you’d well expect. The camera module has a very, very slight extruding border that protects the lenses from such behaviour. I did pick up one tiny mark on one of the exposed antennae on the top of the phone, which seems to have happened when it was in my pocket.

As for features, let’s start with the front. There’s a front-facing camera and iris scanner inside the top bezel along with the earpiece and an LED notification light. On the bottom there’s nothing visible, although the lower portion of the screen is actually a pressure-sensitive home button that can be used to wake the phone. On the left edge you get the volume rocker and the Bixby personal assistant button, while on the right is the power button. The lower edge is home to the USB-C connector, 3.5mm headphone socket and pop-out S Pen stylus, as well as the loudspeaker. Finally, on the top, you get a SIM card/microSD card slot.

The camera module comprises of two sensors behind two lenses (more on these in the Camera section), an optical heart-rate monitor, LED flash, and a fingerprint scanner. I’ll save the fingerprint scanner for later, but I’ll say right here that on a phone this size, this is most certainly the wrong place for it and is almost impossible to reach when pulling the phone out of your pocket.

Its 6.3-inch screen might sound like a nightmare for the small-handed. In reality, thanks to the sloped edges, tiny top and bottom of the bezel, and slightly stretched 18.5:9 aspect ratio, it’s nowhere near as big as the 5.5-inch iPhone 8 Plus and other similarly chunky phones. 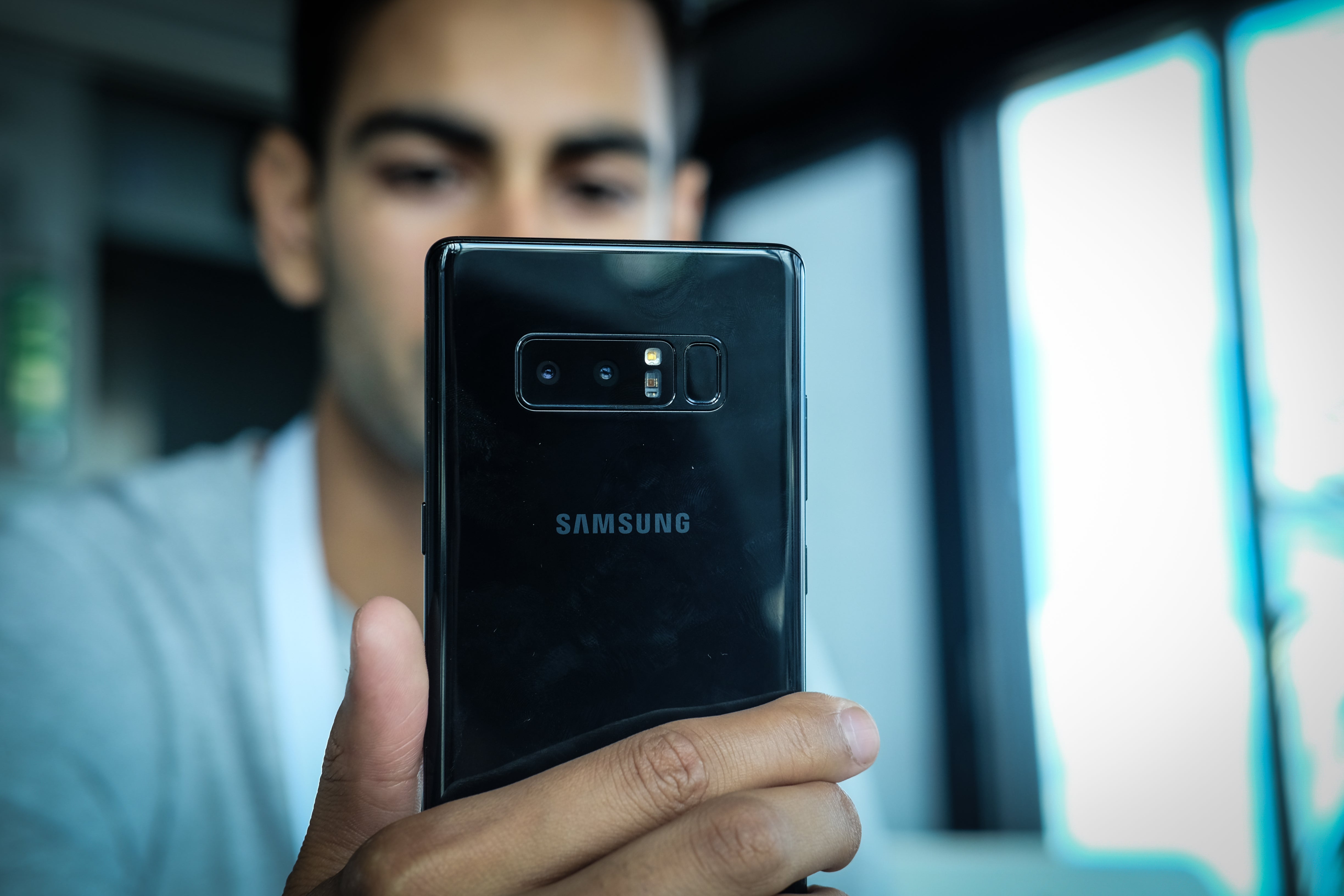 It’s comfortable to hold in one hand, but less so to operate it effectively. If you’re just idly scrolling through Facebook then it’s fine, but as soon as you want to tap a button in the top half of the screen you’ll need your other hand, or to activate one-handed mode. One-handed mode is off by default but will be essential for many buyers and, once enabled, can be activated either by triple-tapping the home button or swiping diagonally up from the bottom corners. 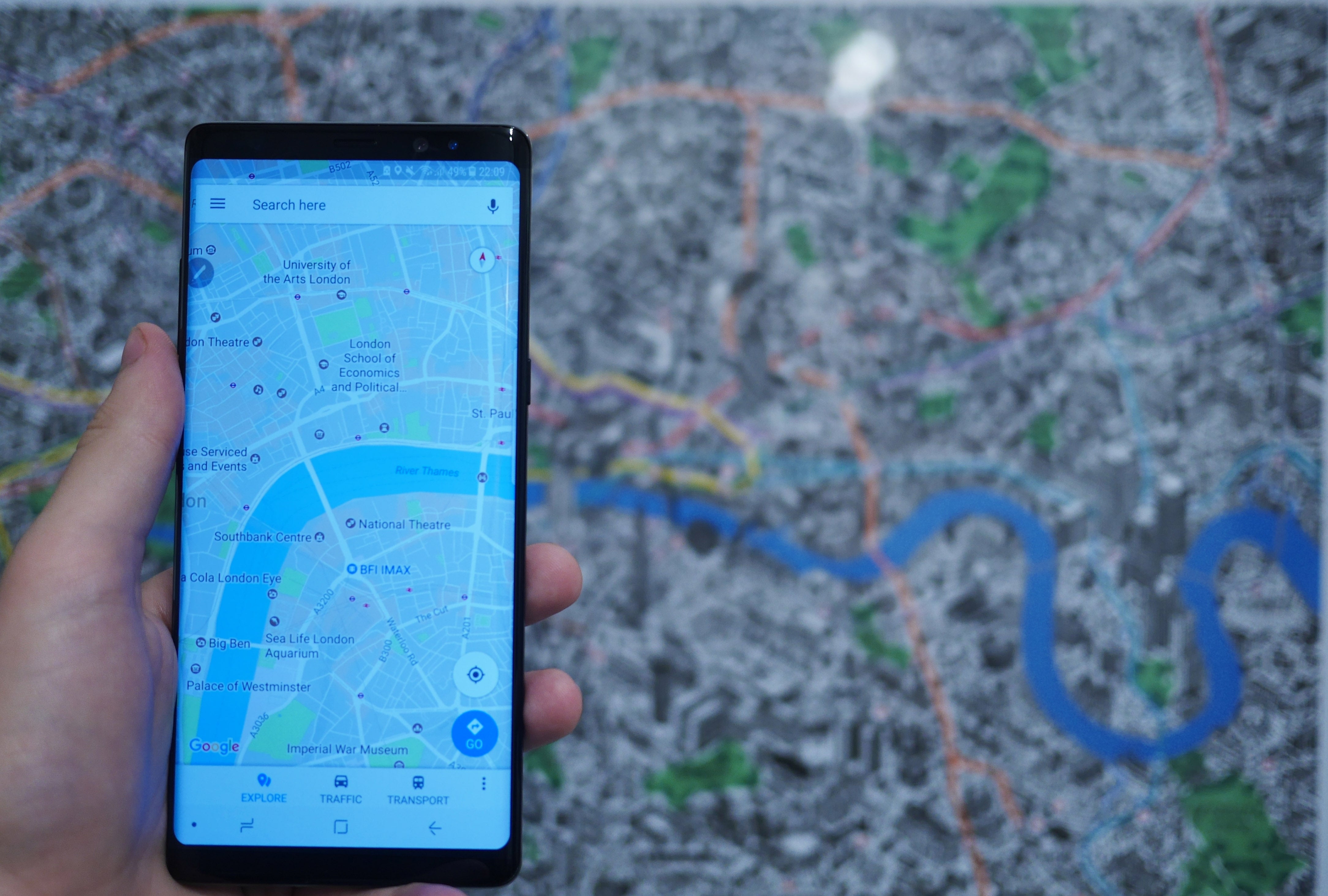 To many users, this will be confusing. Why have so many pixels when you’re not going to be using them to their full effect? When in FHD+ mode, 2.3 million dots are being dealt with by 4.2 million physical pixels, which seems like a waste. Indeed, only serving up FHD+ saves processing power, but doesn’t save any power from the screen itself.

Complexity aside, even when in its standard mode, the screen is stonkingly good. When it needs to, it can rise to an eye-searingly bright 1200 nits. For for the uninitiated, a good laptop screen will get to about 300 nits and a top-end HDR TV will generally get to around 1000 nits. That’s unbelievably bright, although it’s hard to verify because even with automatic brightness switched off the screen refuses to go beyond 340 nits under normal conditions. I suspect you’ll only ever get to 1200 nits when watching HDR compatible content from YouTube and Netflix, both of which look fantastic.

The AMOLED display manages clean whites, rich colours and only a hint of motion blur when scrolling through text. There’s a slight blue tinge if you view the phone off-centre, and the two sloping edges lose some brightness and clarity, which is a bit disappointing, if not surprising.

With the screen turned up to its full WQHD+ resolution, text is super sharp and crisp, as are high-resolution photos. But, I’ll be honest, you’d be hard-pressed to spot the difference in everyday use. I suppose this conclusion sort of justifies Samsung’s decision to disable the full resolution by default, but that doesn’t change the fact that this super-expensive screen is being wasted most of the time.

Because of the odd aspect ratio, you have to explicitly set each app you open to be stretched to the full length of the screen. So far I’ve had no problems with this. The only other downside is that most online videos are in a 16:9 aspect ratio, which means your video will have black bars either side of it, or you can stretch and crop the video so it fills the screen. Some widescreen movies actually benefit from the latter, but you’ll need to decide on a video-by-video basis.

One final function of note is the always-on screen. Because AMOLED pixels are self-lighting (they only consume power when they’re not black, unlike conventional LCDs that are always on), you have the option of keeping the display on with a black and white clock, battery information and media buttons.

This is great, until you check out Samsung’s power options and realise that having it on can decrease battery life by over an hour a day. What’s more, it doesn’t seem to turn off even when the phone is in your pocket, wasting even more precious energy. It’s a great feature on Samsung’s other phones, but when battery capacity is so tight, it’s the first thing you should turn off.

Next
Software and S Pen Review