I’ve already mentioned that the iPhone 7’s battery life is a problem, and it really is. I’ve found myself constantly out of juice before getting ready to hit the pillow, even on days when the phone’s only been used moderately.

In fact, I’ve found myself abandoning Pokémon Go entirely – some might say that’s a good thing – since any apps that use the GPS seem to drain the battery even faster.

It’s a little strange that this should be the case. The iPhone 7 actually has a larger battery than the iPhone 6S and a processor that should help with efficiency. And in some cases it does last a while. For example, it hardly drops any charge at all when not in use.

However, in practice, I’ve found the iPhone 7 has the shortest battery life I’ve experienced on any mainstream phone over the past couple of years. The larger iPhone 6S Plus or Samsung Galaxy S7 Edge are miles ahead of it, and it doesn’t even come close to the tiny iPhone SE.

Apple claims the iPhone 7 has a longer battery life than the iPhone 6S by two hours, but I’m not sure under which circumstances. I’ve been so surprised by its lack of stamina that we tested a second iPhone 7 just in case there was something wrong with my review sample, but the results were the same. It lasts a little over 6 hours of constant use.

I have found myself compensating for it. I rarely need to charge a phone during the day, but I realised I’d been borrowing a colleague’s Lightning cable regularly since I started testing the iPhone 7. When I’ve been out and about all day I’ve been using a battery pack to stay juiced. It’s not ideal by any stretch.

The below battery-drain test was conducted with the screen at a comfortable 60% brightness and the speakers on halfway, where appropriate. 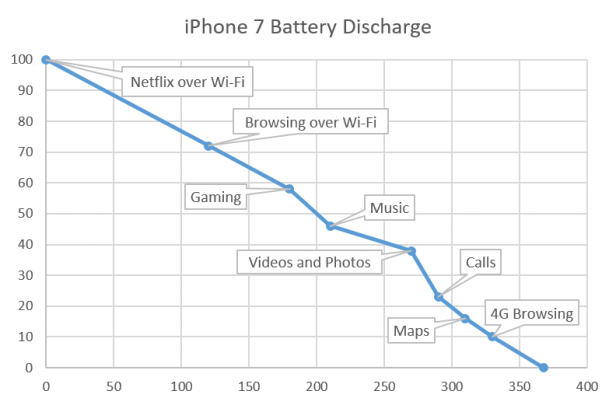 You do get some more life out of it if you turn the screen right down. Leaving the iPhone 7 at quarter-brightness gives you almost 15% more life, but it’s too dark for my eyes. That great screen is there to be enjoyed and whacking the brightness right down makes it lose its sparkle.

A minor saving grace is that it charges reasonably quickly. It gets to 81% from empty in an hour and is fully charged in less than 90 minutes. It’s not quite fast-charging – the Galaxy S7 charges in 75 minutes and the OnePlus 3 in just an hour – but it’s not too bad either.

If you don’t use your phone much – just browse the net, make a few calls and texts, take a few pics, listen to some music and don’t play games – you’ll be alright. Anyone else might want to wait for our review of the iPhone 7 Plus as, based on previous Plus experience, it should last a lot longer.

I only hope that the battery problem is a software issue and can be remedied in future updates. I’ll update this review if that’s the case.

I’ve been happy with the call quality on recent iPhones. Generally, all phones have this down these days, thanks to noise-cancelling microphones that cancel out general hubbub.

The iPhone 7 deserves a special mention, though, since the ear speaker can be very loud if you want it to be. That means if you’re a little hard of hearing or work in a noisy environment you’ll appreciate it even more.

Should I buy the iPhone 7?

Barring its battery life the iPhone 7 is a great phone. Its camera, screen and performance are awesome, and the water resistance is a real boon.

However, the iPhone 7’s battery life is a real worry and the lack of a headphone jack will be a major annoyance to some. I suspect the iPhone 7 Plus won’t be as problematic, but at the moment if you’re hell-bent on a small iPhone I’d recommend the more compact, and far cheaper, iPhone SE.

There are many positives to take from the iPhone 7, but unfortunately they’re negated to a large extent by poor battery life and a lack of basic features.