If there’s one area where the iPhone 6 Plus stands out, and is streets ahead of the iPhone 6, it is battery life. The 2,915mAh battery packs enough juice to let the iPhone 6 Plus last two full days of reasonable use with the screen set to 50% brightness. Whack the brightness up though and that big, bright 5.5-inch screen will start sucking up the juice.

That’s far longer than the LG G3’s 3,000mAh battery can last and it bests the Samsung Galaxy Note 3, too. 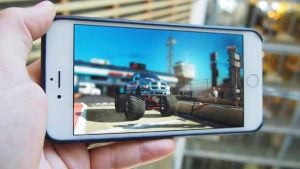 But how did it fare in our tests? Apple quotes 14 hours of video playback and 80 hours of music. We managed more than three hours and 45 minutes of high intensity 3D gaming, which is exactly the same as the Galaxy S5, but is a full hour more than the iPhone 6. We also found ourselves leaving the office with more than 75% battery left on occasion, which never happened when using the iPhone 6.

In our standard video test where we play a standard definition video on loop until the battery dies, the iPhone 6 Plus’s battery managed just under 12 hours before shutting down. That’s two hours more than the iPhone 6 and almost an hour more than the Galaxy S5.

The iPhone 6 Plus has a lot of staying power – in fact it is close to having the longest battery life of any smartphone we’ve tested. It’s slightly better in some respects to the HTC One M8 and Samsung Galaxy S5, two recent smartphones that boast great stamina.

If battery life is a key factor for you then you won’t go wrong Apple’s biggest phone yet.

iPhones have good call quality and the iPhone 6 Plus is no different. It comes with a noise cancelling microphone that manages to moderate external noise enough for you to hear the person on the other line, even in noisy conditions.

The iPhone 6 Plus suffers from some poor quality sound in locations where your connection to the network is poor. This isn’t a problem limited to the iPhone 6 Plus by any stretch but Apple has included VoLTE (Voice over LTE) , which should help matters once networks start using it.

Some Samsung phones also carry this feature but you’ll have to check with your network provider to find out when they’ll be enabling it in your
area. 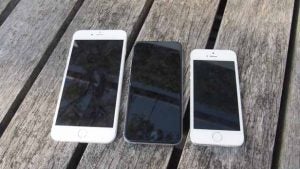 From left to right: iPhone 6 Plus, iPhone 6, iPhone 5S

Should I buy the iPhone 6 Plus?

It’s all a question of size. Can you live with such a big phone? If the answer is yes then there are some clear benefits to getting the big iPhone. Battery life is one, optical image stabilisation the other and that magnificent screen the third.

If size is an issue though, and you really want an Apple phone then you should look to the iPhone 6. It is also a great phone.

The LG G3 is a good, and more pocketable, 5.5-inch phone that doesn’t quite reach the build quality of the 6 Plus but comes in at half the price. We haven’t yet had enough time with the Samsung Galaxy Note 4 to compare it to the iPhone 6 Plus quite yet. It’s the most obvious competitor so we’ll update this section with our finding once we’ve put it through its paces.

Fundamentally, though, this is an excellent phone. Some people will prefer one thing or the other depending on their needs and preferences, but if you do buy an iPhone 6 Plus then you won’t be disappointed.

The iPhone 6 Plus is a great phone if you can deal with its size and price. It’s blisteringly fast, lasts for ages and comes with one of the best screens we’ve ever seen. The optical image stabilisation takes the good camera on the iPhone 6 and makes it even better.