Apple is often accused of being behind the times when it comes to screen resolutions. The iPhone 6 Plus comes with the highest resolution display ever on an Apple phone. It’s a full HD screen – 1920 x 1080 – with 401 pixels per inch (ppi). Apple calls it Retina HD but in pure number terms it falls behind of the best Android phones. Both the LG G3 and Samsung Galaxy Note 4 come with QHD screens, which means a resolution of 2560 x 1440 and 534ppi / 515ppi respectively.

That sounds like a big difference, but it isn’t really. You don’t notice the extra pixels much. The Korean phones are sharper than the iPhone 6 Plus but you’ll have to zoom into text or pictures to notice any difference. In most other respects the iPhone 6 Plus has them beaten. The screen is
bright and copes brilliantly in bright sunlight.

Colours are supremely
accurate – they remain perfect at every angle and it has the best
contrast and black level of any LCD-screened phone. It can’t compare
with the perfect blacks that the AMOLED display on the Note 4 can
muster, but the natural colours make up for it.

Screen experts DisplayMate
also rate the screen on the iPhone 6 Plus, calling it the “best
performing Smartphone LCD display that we have ever tested”. This is a
very special screen indeed and you’ll love using the extra real estate
to play games or watch videos. 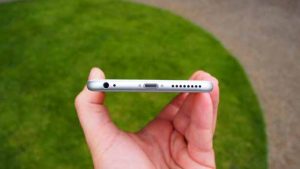 The extra space means that the iPhone 6 Plus comes with a bigger and better speaker than the one on the iPhone 6. It is louder but more importantly it also comes with more depth and low end. It’s still mono, but you’ll happily watch your favourite Netflix series.

One issue that is more apparent with the speaker on the 6 Plus is that the grille is at the bottom right where your index finger is when holding it in landscape mode. The iPhone 6 is narrow enough to allow your finger to curve and not muffle the speaker, but this is more problematic on the iPhone 6 Plus. Considering the size of the top and bottom bezels it’s a shame that Apple didn’t choose to place front facing stereo speakers like the ones found on the HTC One M8.

It’s been a while coming but the big news is that the iPhone 6 Plus has NFC (Near Field Communication). It’s limited to Apple Pay so you won’t be able to use it to pair with other NFC enabled devices you might have around the home, like wireless speakers, but Apple Pay has a huge amount of potential.

In other respects the 6 Plus has everything you’d expect from a top-of-the-range phone. You get Bluetooth 4.0, AirDrop (Apple’s feature that lets you easily share content from your phone with other Apple devices) and Wi-Fi 802.11ac. That’s a lot faster than the Wi-Fi on the iPhone 5S although you will need an 802.11ac capable router to take advantage of this.

The iPhone 6 Plus also comes with a comprehensive 4G/LTE chip that covers 20 bands supports speeds up to 150Mbps. This means that it should work well on 4G networks around the world – a useful fact if you’re planning on importing one or you travel widely.

Next: iPhone 6 Plus Performance