The iPhone 6 Plus has an 8-megapixel rear camera similar to the camera found on the iPhone 6. It comes with the same new phase detection feature for faster focussing that Apple calls ‘Focus Pixels’ and allows you to change the light balance on the fly. Focus pixels help the iPhone 6 Plus focus a lot more quickly than the iPhone 5S before it.

There is one important difference between the iPhone 6 Plus and the 6 – it includes optical image stabilisation. It’s by no means the first phone camera to use it, we’ve seen it in Nokia phones in the past and the Nexus 5 last year, but it’s the first Apple phone to have it. 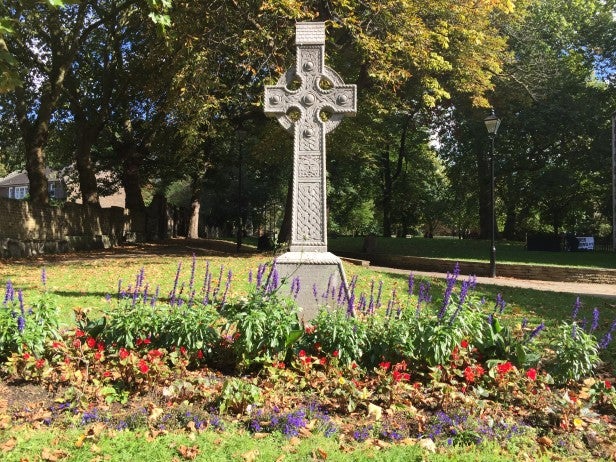 What is Optical Image Stabilisation (OIS)?
Optical image stabilisation helps you take good quality photos by using a gyroscope to keep the lenses stable. This comes with some major benefits when you’re shooting. The most important is that you can get sharp, blur-free images even in low light conditions.

To get the most amount of light possible the shutter speed of a camera is slower in dark conditions. This means that any slight hand movements while taking the picture are exacerbated, leading to out of focus images. OIS particularly helps eliminates some of issues associated with taking phone pictures one-handed, where you’re less stable. 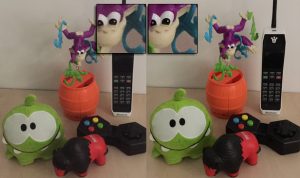 In our test shot in low light conditions (above) the iPhone 6 Plus provides pictures with less noise than the iPhone 6. Those big pixels also mean it’s streets ahead of the Samsung Galaxy S5 in dingy lighting.

In our test shot on an overcast Sunday afternoon you will notice that the iPhone 6 Plus’s shot is a little brighter and the colours more authentic. 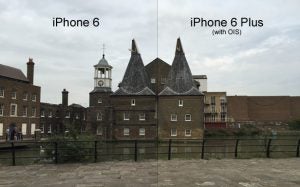 However on a bright and sunny day the differences between the iPhone 6 Plus and its little brother are negligible. In these conditions the extra pixels of the Samsung Galaxy S5’s camera makes it shine, providing more detail than the iPhones can muster. 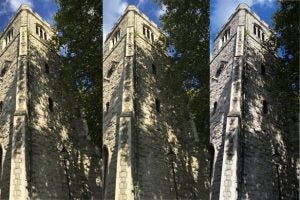 From left to right: iPhone 6, iPhone 6 Plus, Samsung Galaxy S5

In terms of video the iPhone 6 Plus shoots full HD, so it doesn’t quite match the 4K shooting that some other flagship phones offer. It does, however, come with sensational slow motion video capture that now captures 720p video at 240FPS. It’s easy as pie to use and results look fantastic.

The iPhone 6 Plus does not manage well with large, sharp movement during video recording. The stabilisation tries to overcompensate and results in video that is over processed. A video we took with it strapped to a bike’s handlebars looks like it’s been shot underwater.

The front facing camera has also had a boost. The aperture has been increased to f/2.2, which means more light gets to the sensor and better selfies can be taken in low light conditions.

Time lapse is the final new feature that Apple has added to the camera app on iOS 8. It’s a fun feature to play around with if you have a little patience.

Next: iPhone 6 Plus Battery Life