I have never had a problem with the performance on any iPad out of the box, and the iPad 9.7-inch is no different. This is a smooth and fast tablet that can handle any app or game from the App Store with ease.

The 64-bit A9 chip isn’t the latest or greatest CPU in Apple’s arsenal, but it’s still very capable. I can comfortably edit FHD footage in iMovie or edit RAW photos in Pixelmator without any lag, and it consistently opens apps and files quicker than the iPad Air 2 which ran the A8X chip.

While I said the iPad Air 2 has a better screen, the iPad 9.7-inch is marginally faster in certain intensive tasks. It’s far from a reason to upgrade, and the Air 2 is still very fast, but it’s important to note anyway. 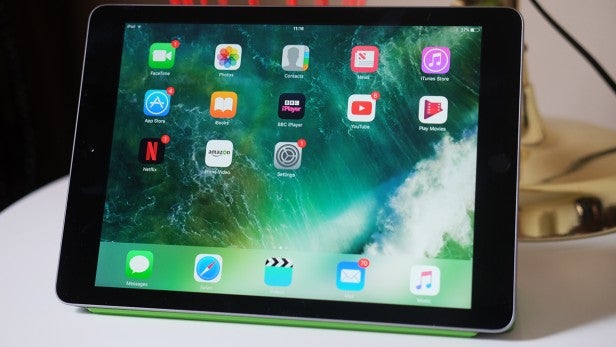 The 2GB RAM is the same as both the iPad Pro 9.7 and iPad Air 2, and again does the job well. It’s not as much as the Android toting Galaxy Tab S3, but even the iPhone 7 only has 2GB RAM.

In more synthetic benchmarks tests, the iPad 9.7-inch scores 2539 and 4425 respectively in the Geekbench 4 single and multi-core tests. That’s actually higher than both the Samsung Galaxy Tab S3 (3945) and the Google Pixel C (2816), even though both are pricier slates.

Apple is offering two storage sizes, 32GB and 128GB, and as usual there’s no microSD so choose wisely. You can also choose 4G support if you wish, but this will set you back another £130.

The iPad 9.7-inch is a universally great tablet, but it certainly ain’t no camera. The rear-facing 8-megapixel camera has a very narrow f/2.4 aperture and I would consider using it for document scanning only. For anything else the results are noisy and blurry, and just plain not very good. 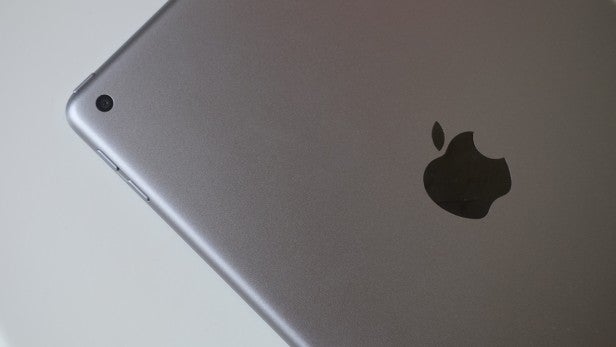 To be completely honest, I think for a tablet like this I would prefer a bigger saving and no rear camera at all. At least that would force people to not use it as their main camera.

As there’s no image stabilisation, 1080p video is shaky and while there is an HDR option and even control over exposure, neither make a whole heap of difference.

The 1.2-megapixel front-camera is equally weak, which is a bit more disappointing. I can see this being a good Facetime tool for families, but video-chats do look very blurry and ghosting is common.

The new iPad 9.7-inch runs iOS 10 just like every other iPhone or iPad you can buy right now. It’s the same gridded homescreen layout that’s now become iconic, with access to the best selection of tablet apps from the App Store. If you’ve used an iPhone or iPad before, you’ll feel instantly at home.

iOS is both excellent and slightly awkward for a tablet, but unless you want something that runs of full desktop operating system like the Surface Pro 4 then it’s your best option. It’s infinitely more usable on the big screen than Android, and I am not quite so fussed about the lack of ‘pro’ features on a tablet that is this affordable.

iOS 10 didn’t add too many iPad specific features, most of them came a year earlier with iOS 9. iOS 9 added in split-screen multitasking and a few other tricks that helped the iPad become a more productive device.

You can open two apps side-by-side, and then resize them at will. This is great for watching a YouTube video and knocking out an email at the same time, or taking notes while studying a web-page. It works well, and even though there’s only 2GB RAM in here nothing is too much trouble. 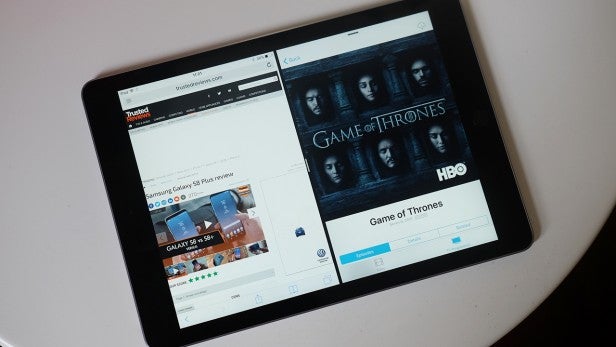 Only nifty feature that’s just for iPads is being able to pull out a video player and have it floating above your other windows. Again, this is perfect for watching Netflix while you’re working.

Tablet apps are really what sets the iPad apart from Android rivals you’ll likely be able to pick up cheaper. Whereas the majority of apps on Google Play are built for mobile, loads on the App Store are made just for iPad. They make full use of the additional size of the display, of the high-resolution of the panel and don’t just feel like enlarged phone apps. There are also iOS-only apps, like Paper, which are custom-built for the iPad.

If you’re looking to use the iPad 9.7-inch for more than media watching, then there’s the Office suite – though I actually prefer Apple’s own Pages, Numbers and Keynote apps on an iPad – and again these are built to make the most of the big display.

Another bonus of an iPad is that you’ll be first in line for the next version of iOS, which will will likely be released in September just before the iPhone 8.