If you’re on the hunt for a media tablet for streaming Netflix, browsing the web and playing games then the iPad 9.7-inch is for you.

It’s not as feature rich as the iPad Pro, nor as thin as the iPad Air 2 it’s replacing, but it’s the perfect mix of functionality and price.

I wouldn’t advise any anyone upgrades from an iPad Air, but if you’re looking to upgrade an older iPad, or a new tablet entirely, this is the one you should buy.

If you’ve seen one iPad from the past five years, you’ve seen them all. The metal and glass design with those curved chamfered sides hasn’t changed a lot since the iPad 2, but that’s because Apple hit upon a formula that clearly works. The design has aged very well, which isn’t something you can say about a lot of tech.

The iPad 9.7-inch is thicker and marginally heavier than both the iPad Air 2 it essentially replaces and the pricier iPad Pro 9.7-inch, but really unless you have all three side-by-side you’re not going to think anything of it. The new iPad 9.7-inch is light enough to hold up while binge-ing on Netflix, and it’s barely noticeable when chucked in a bag.

In fact, this iPad has more in common with the first iPad Air in terms of weight and thickness, and cases for that model fit the 9.7-inch iPad perfectly. 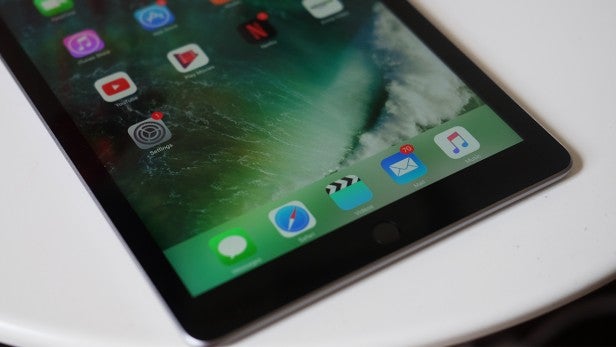 Around the sides you’ve got a volume rocker – there’s no orientation lock here – and a headphone jack on the opposite side to the power-button on the top. On the bottom you’ve got the single speaker and a Lightning port for charging, And, of course, there’s a shiny Apple logo smack bang in the centre.

A TouchID enabled home-button sits just below the 9.7-inch display, and it matches the other iPads in terms of speed and reliability. That means it’ll unlock with a firm tap, but it’s not quite as snappy as the one on the iPhone 7.

While I like the design of the iPad, I can understand it might seem tiresome to many. But, importantly it’s durable and holds up well to being passed around different family members. Apple is aiming this as the iPad for everyone, and I think the design fits well with that mantra. 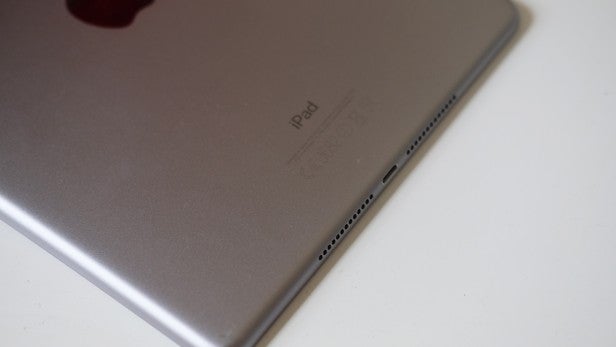 The iPad 9.7-inch looks almost the same as the first iPad Air, and it has the same display, too. This is both good and bad news.

The good is that this is a great 9.7-inch screen; it carries the Retina moniker and packs a dense 2048 x 1536 resolution that actually matches the pricier iPad Pro.

It’s an LCD panel, so it doesn’t quite have the saturation and sheer colour pop of the AMOLED on the Samsung Galaxy Tab S3, but colours are bright and it’s virtually impossible to pick out individual pixels. Blacks are deep, too, and it’s just a fantastic screen for watching movies or reading books.

It lacks the Dual-Tone tech of the iPad Pro 9.7-inch, whereby the screen dynamically adapts to the environment, but you still get the Night Shift mode for ridding the panel of pesky blue hues that are believed to harm sleep if you often use a tablet before bed. It makes the screen go a soothing orange colour, and does seemingly make a genuine difference. 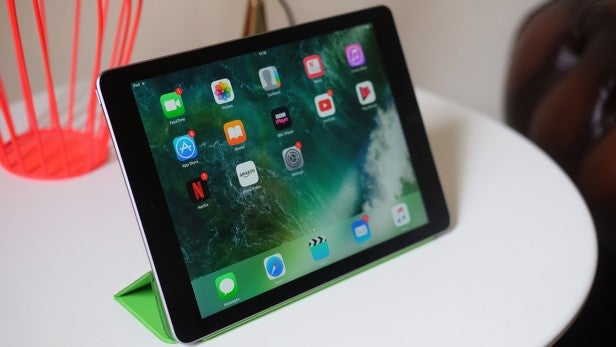 My biggest issue with the display though is the lack of lamination of the panel to the glass that sits above it. This was something that was introduced with the iPad Air 2 and it gets rid of the air gap that sits under the glass.

With a laminated panel it feels like you’re actually touching the pixels, without it though it’s obvious you’re pressing down on the glass. There’s a visual difference, too, and a laminated display does a much better job at minimising reflections when you’re using the iPad in sunny conditions.

By no means does this stop me recommending the iPad 9.7-inch, but if you’re particularly fussy about displays I would suggest looking for a iPad Air 2 instead.

The downward facing speakers are on the bottom, and they’re fine if nothing special. They’re loud, with enough detail for movies and YouTube, but they lack the bass needed for music.

There’s also no support for the Apple Pencil or the Smart Keyboard, so keep that in mind.