What is the Huawei Ascend P7?

The Huawei Ascend P7 is a flagship Android phone. It is designed to be an alternative to mobiles like the Samsung Galaxy S5 and HTC One M8 – that’s some serious competition.

An eye-catching design goes some way to justifying such a position. However, it isn’t as quick or swish as the best phones out there and lacks a standout feature to make up for this. 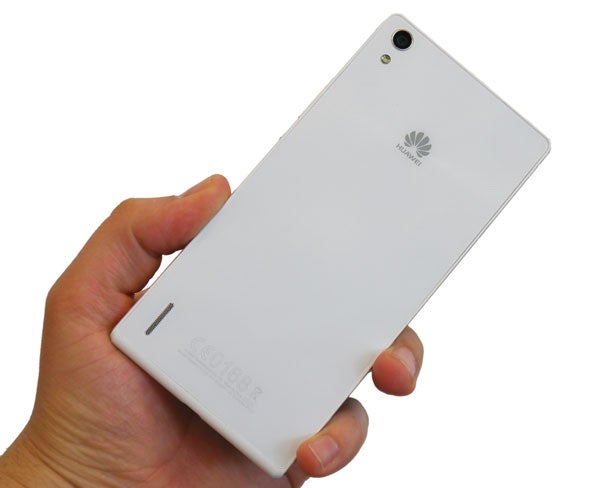 Huawei’s P-series phones are known for being some of the thinnest mobiles in the world. The Huawei Ascend P7 is no different.

At 6.5mm thick, it is significantly thinner than the already wafer-thin 7.6mm iPhone 5S. Being so skinny makes handling a 5-inch phone like the Ascend P7 a bit easier. We don’t find it tricky to reach from one side of the screen to the other, for example.

As well as being somewhat iPhone inspired in its dimensions, the Ascend P7’s look is quite iPhone-like. Its sides are textured aluminium, the back a flat pane of toughened glass. This is almost certainly the best-looking phone Huawei has made to date.

Highlights particular to this phone include a curvy bottom edge and a textured-look finish to the rear, sitting under the top-most glass layer. 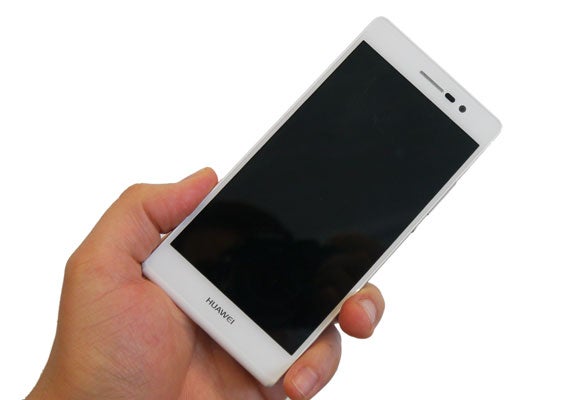 It’s a striking phone, but there are a few elements that could be improved – things that show Huawei is dipping its toe into relatively new waters with a ‘prestige’ phone like this. The texture of the aluminium is nowhere near as accomplished as that of the iPhone 5S, for example, the squared-off silhouette of the Ascend P7 is not as inviting as something a bit rounder, and we’re not convinced the Huawei logo on the front is really necessary.

Or, to be more realistic, it’s probably necessary for Huawei’s brand expansion strategy, but it doesn’t do the Huawei Ascend P7’s design any favours.

These are all minor points but it is in these details that the devil resides. Nonetheless, the actual construction quality is good. There are no wide seams, the glass and metal body feels good to hold and all the buttons and sockets are thoroughly well executed.

All the main bits are laid out along the right edge – the neat circular power button, the standard volume rocker and the duo of pop-out trays that hold the microSIM and microSD card slots. Given the number of grace-free flaps we’ve seen on previous Huawei phones, this is a rare display of classiness. 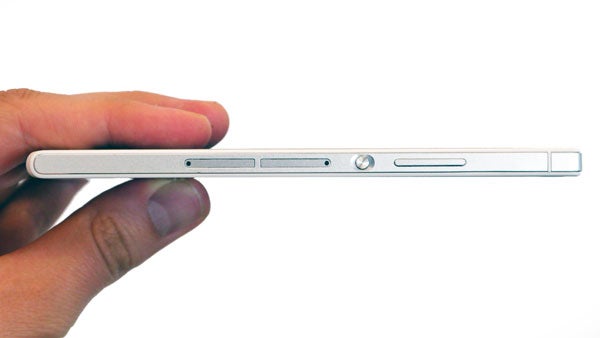 Huawei has clearly put a lot of effort into the Ascend P7 design, and it does pay off – much as its relative inexperience in this high-end field is noticeable.

Much of the Ascend P7’s front is taken up by the screen. The bezel is slim and as there are no physical soft keys, there’s not much else the phone needs to fit on the front – though the camera and sensor next to the earpiece are yet another of this phone’s slight design slip ups.

Screen specs are up there with the best. It’s a 1080p IPS LCD display, and at 5-inches stays clear of the sort of size that makes a phone somewhat tricky to use. 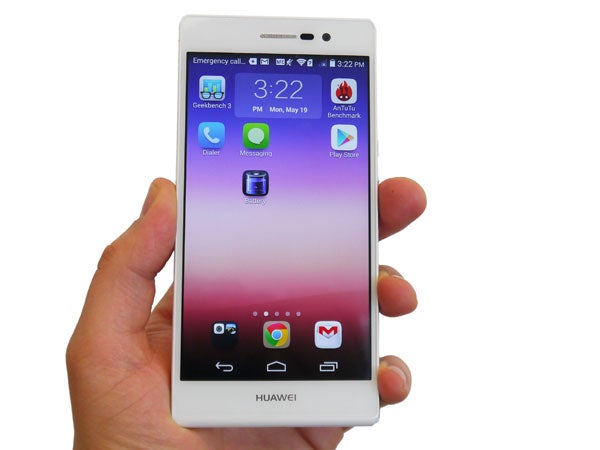 The Ascend P7’s display quality is reasonably good too. Colours are well-saturated but natural looking and the 441ppi pixel density ensures everything looks super-sharp. This is one of those high-calibre displays where you can’t see individual pixels.

However, elements of its performance aren’t quite up there with the very best LCDs – seen in phones like the Sony Xperia Z2. Viewing angles in particular are noticeably so-so. There’s no horrible contrast shift but there is significant brightness loss from some angles and fairly severe IPS glow from others. 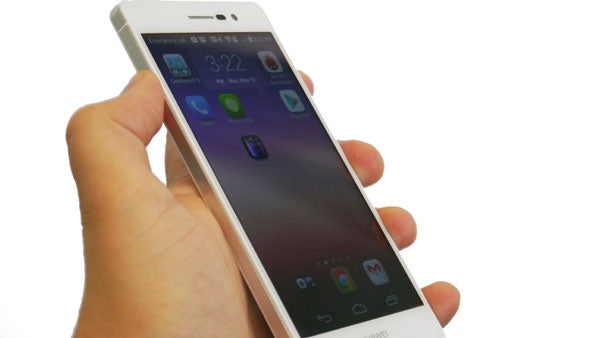 This isn’t the sort of thing you really notice in use, but it is an example of how the Ascend P7 lags behind phones like the Galaxy S5 and Xperia Z2.