The Huawei Ascend P7 runs the latest version of Android, 4.4.2, and has a custom Huawei interface known as the Emotion UI. It is this, rather than Android, that really determines what the phone looks and feels like to use.

Huawei’s Emotion UI is one of the more unusual custom interfaces, because it fundamentally changes the layout of the system. Rather than having home screens and a separate apps menu, all your apps are laid out across your home screens. 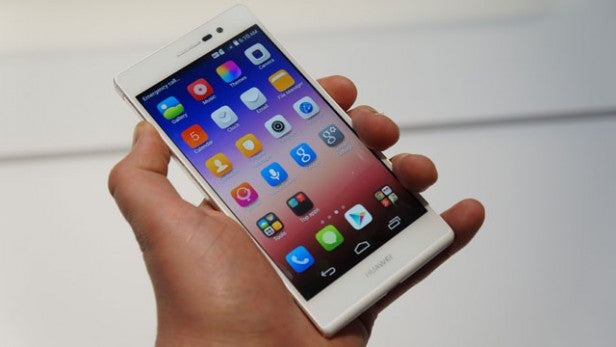 This requires a bit more careful curation than standard Android, where your apps are normally laid out in either alphabetical or rough chronological order. Emotion UI’s inspiration here is iOS, the software used in iPhones, but as it is slightly less easy to use, it’s not quite a roaring success.

Perhaps the biggest issue is that you have to really try to get it looking and feeling as you would like, where there’s less preparation required in most other phones.

Another way the Emotion UI differs from other Android interfaces is that it positively encourages re-skinning of the phone. There’s a Themes section, which offers a bunch of interface looks, tweaking app icons as well as the lock screen, and the Ascend P7’s wallpapers.

Most are a quite stilted-looking, but the Balance theme we’ve not seen before in Huawei phones is pleasantly simple. There are actually loads of additional themes available online, but this is not well communicated, and finding them is itself a chore. You’ll find a great selection over at the Chinese Emotion UI website – on the UK one there’s only a smattering, designed for one ancient Huawei phone. 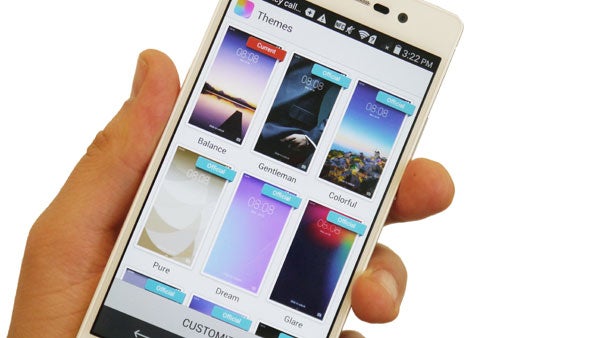 Some may appreciate this level of customisation, but it is really quite out of touch with what other phone-makers are doing. These days, creating standard, simple and intuitive interfaces is the way forward.

There are a few neat extras in the latest version of the EmotionUI, though. It offers floating widgets for things like note-taking, SMS messages and the calculator, letting you perform basic tasks without stopping whatever you’re doing at the time.

All these tweaks do have an impact on performance though, which is disappointing for a phone of the Huawei Ascend P7’s not-inconsiderable price. There is lag when flicking through the interface at times, more so than the £99.99 EE Kestrel, a phone also made by Huawei. It extends to quite basic tasks too. For example, you’ll often have to wait when typing as the keyboard catches up with your fingers. It’s odd in a phone of this grade.

While much of this slow-down is due to the software, and thus can be alleviated by installing another launcher such as the Google Experience launcher, the core hardware of the Ascend P7 comes in to play too. Its CPU and GPU really aren’t anywhere near as powerful as the big-name competition.

The Huawei Ascend P7 uses a HiSilicon Kirin 910T, a quad-core 1.8GHz CPU. This is a processor made by Huawei, rather than a silicon specialist like Qualcomm. 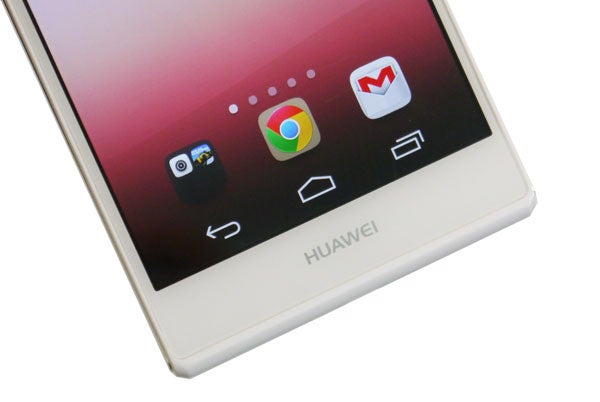 Benchmarks show that the Ascend P7 is, at best, on-par with the lead phones of 2013. It is not remotely a match for phones like the Galaxy S5 and HTC One M8 in pure performance, though of course this still makes it a fairly powerful mobile.

In the Geekbench 3 app, the Ascend P7’s score of 1810 is roughly comparable with the results of a Snapdragon 600 phone like the 2013 HTC One or Samsung Galaxy S4. A phone that really shows up this difference is the LG G2. It is around £100 cheaper than the P7 and has a much more powerful Snapdragon 800 chip.

Does this academic power difference matter when they can all play the same high-end 3D games? It should do, otherwise you might as well buy a significantly cheaper phone from last year, or something like the Nexus 5. Especially when there are some gaming performance issues here.

Aside from the general lag, we noticed more significant frame rate issues in the Ascend P7 than other high-end phones. Real Racing 3, for example, demonstrated fairly significant intermittent frame rate drops – enough to eat into the enjoyment of playing the game.

Part of this is likely down to somewhat lacking optimisation for the Ascend P7’s GPU, a Mali Mali-450mp4, which itself is not high-end. For some context, another phone that uses the chip is the HTC Desire 616, set to go on sale in the US for under $200.

Are the Huawei Ascend P7’s specs not in-line with the asking price? Absolutely.