When it first launched eight months ago Capcom’s Monster Hunter World, blew the Trusted Reviews office away. Seeing you step into the shoes of a Hunter exploring a lush new world full of dangerous beasts ripe for the slaying, the game was so good it achieved Trusted Reviews’ hallowed 10/10 score – something only a select number of games have managed.

The only minor grumble we had at the time was that the game wasn’t available on PC. Capcom had chosen to delay the PC release to make sure it was at least “parable to consoles” graphically and bug free – two things the company’s past PC ports haven’t been. 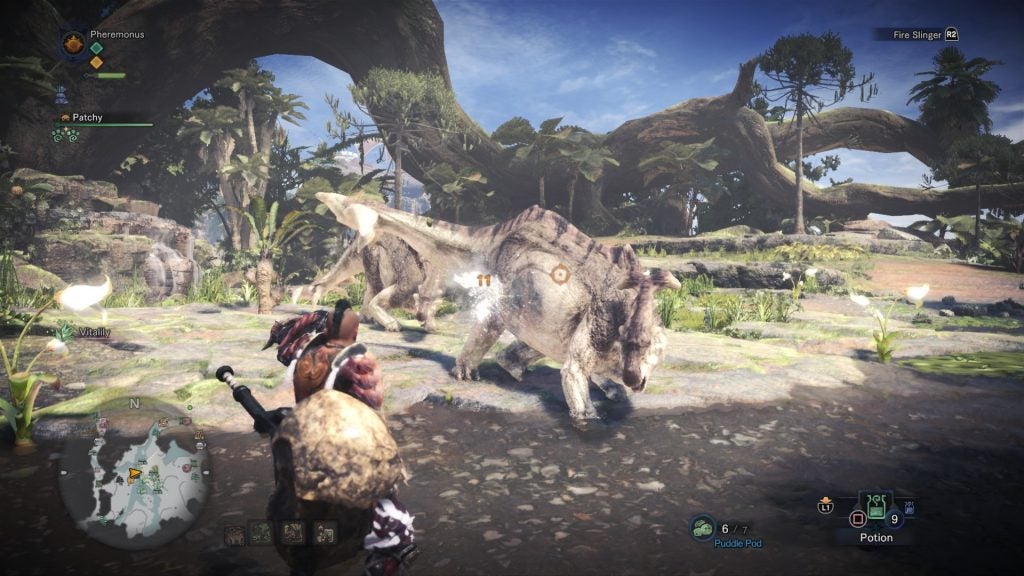 For those that missed it in January, Monster Hunter World is Capcom’s big push to make the series a mainstream hit in the West. Past Monster Hunter games were big in Asia, but failed to make a dent in the West for a variety of reasons. Highlights included poorly explained tutorials which, coupled with the games’ ridiculously high difficulty levels, could make Monster Hunter titles a little intimidating for newbie players.

Fans of Dark Souls, Nioh and other titles that challenge you at every opportunity will feel right at home here. Monster Hunter is a game about stats and planning: every weapon, item, armour piece, attack and skill has numbers attached to it. In order to be the most effective hunter in the Fifth Fleet as you research this New World, hoping to learn about it’s flora and fauna, and understand why the monsters within it behave the way they do, you’ll need to become familiar with these stats.

And there are hundreds of things to learn, each with different stats attached that you can appreciate and compare. It’s an analyst’s dream. This may well sound intimidating, but World does a brilliant job of easing players into its systems. Much of this complexity isn’t in the forefront in the early hours of gameplay, leaving you free to hunt World’s incredible monsters in its beautiful environments.

When I say beautiful, I mean beautiful. When it launched Monster Hunter World quickly earned its place as one of the best looking console games available. Now it’s done the same on PC.

Capcom initially said it was working to make sure the graphics were “comparable” to the console versions, which they are for the most part. What separates it from them are the more robust number of settings you can tweak and ability to play it without a framerate cap.

You can set the game to play at the top framerate your hardware can handle, or lock it 30/60fps with Vsync on, if screen tearing becomes an issue. This is a big deal as console versions gave you a more stringent set of choices.

The PS4 Pro and Xbox One X players gave you a tough choice where you could either prioritise visuals, frame rate or resolution – depending on your preference. Even when you opted for framerate it was clear the consoles were at their limit. Playing on the PS4 Pro I still noticed drops, even when I set it as a priority.

On PC you’re free to tweak the settings to your heart’s content, so in theory, if your hardware is up to it, you can have all three and play Monster Hunter World with its graphics maxed in 4K at 60fps-plus framerates. I say in theory, as to date I haven’t found a rig that’ll manage this. 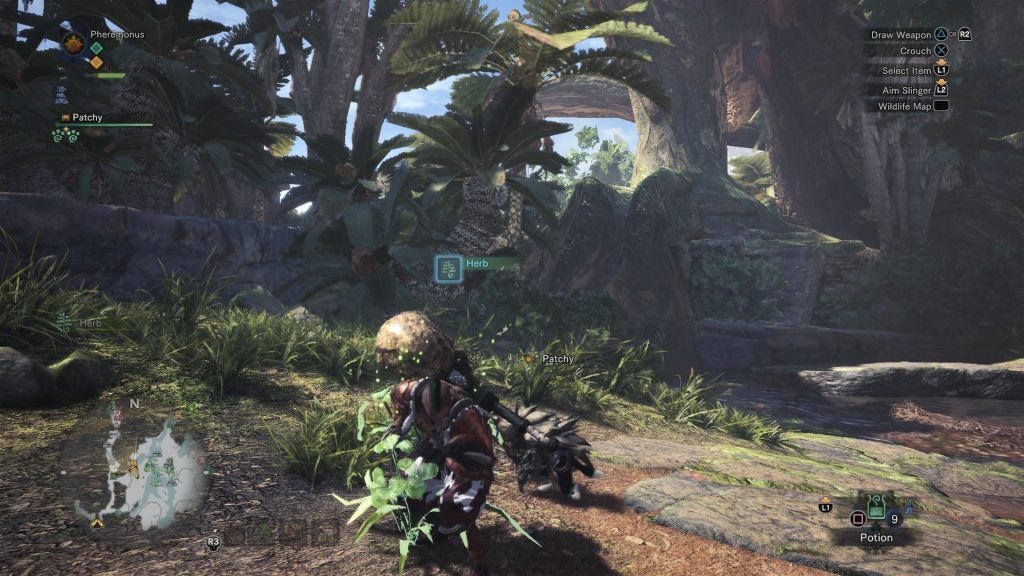 Even with an 8th Gen i7, GTX 1080Ti GPU and 16GB of DDR4 RAM, the game floated at around 30 fps in the highest graphical setting. But still, it’s a nice a addition and thanks to stellar work adding more graphics than you can shake a stick at, it’s easy enough to get it up to 60fps in 4K, if you’re willing to tone down a few of the more advanced effects.

The lack of an in game benchmark is the only minor annoyance that makes getting your optimum graphics setup a wee bit painful early on. Thankfully the opening segment is the ideal time to do it as the game has a fairly gentle intro that’s more about teaching than action, which makes it easy to experiment and find a path to the hallowed 60fps-plus zone without spending forever loading and reloading the game.

The opening few hours of Monster Hunter are full of brief tutorials introducing the hub area and core mechanics. The drip-feed of information over the first dozen hours is so perfectly paced that I was almost learning by osmosis. There were no prolonged cut-scenes where an NPC dictated information to me, laboriously trudging through pages of text to learn how a potion works. Instead, it was learning by doing.

I initially ignored the information about armour defences against different elements, or a weapon’s damage output, instead opting for what I thought looked cool and learning the intricacies as I went along.

It’s a great way of giving newcomers breathing room to learn for themselves. For the experts, the information is still right there, but it only becomes essential later, when feistier monsters become a real handful, and you must become more strategic in your hunts. By that time you’ll be so engrossed in the world of Monster Hunter, you’ll be pouring over its every detail, no matter what your skill level is.

Capcom’s also done stellar work crafting Monster Hunter’s landscape. Every new world you visit is completely different from the last, but each full of rich detail and plenty to discover. From the rich flora of the Ancient Forest to the barren deserts of Wildspire Wastes and beyond, it’s a feast for the eyes and worth taking the time to appreciate. 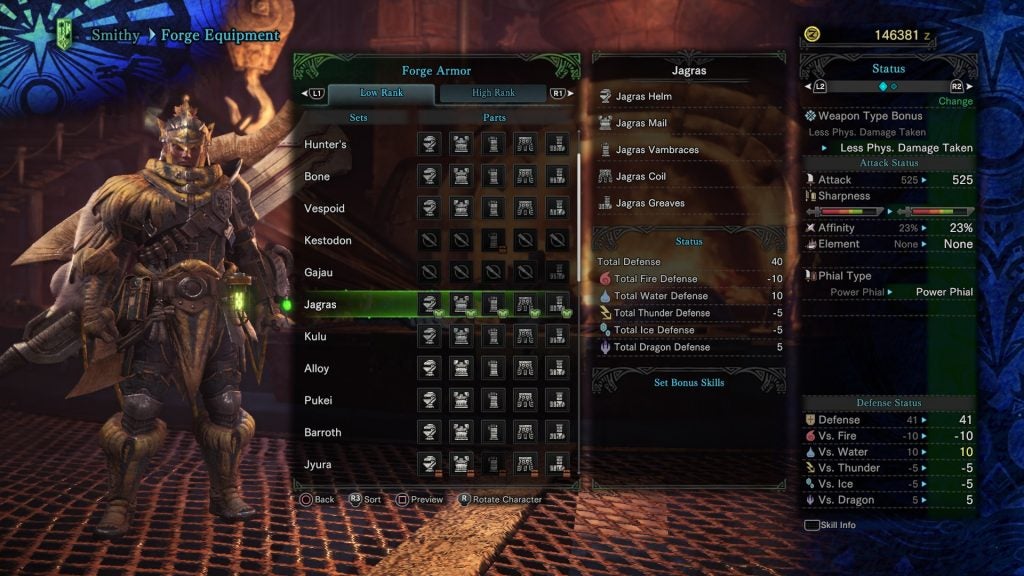 It can be argued that, ostensibly, you’ll be doing pretty much the same thing in each of these worlds: rushing around, collecting herbs, digging through bone piles and, of course, following your Scout Flies as they chase down the latest monster. But since it’s all such fun and satisfying, it never gets old. The combat with each monster is varied, and each battle will play out differently to the last. Thanks to World’s vibrant ecosystems, you’re never exactly sure what lies ahead.

And the combat is the jewel in the crown of it all. Unlike many other games, rank and levelling isn’t tied to your character. Instead, you get better by killing more monsters, looting their carcasses. This in turn allows you to build stronger weapons and armour, improving defence and attack against the bigger beasts.

The native keyboard control configuration is intuitive, but without a joystick to control the direction of attacks, it’s all too easy to misfire, even with the game’s lock on system. Considering how slow some weapons are, and the high stakes in monster fights, this can lead to a few rage inducing moments. As a result, unless you plan to be a gunner, where the extra accuracy of mouse and keyboard is a boon, I’d recommend most PC gamers initially play with a gamepad.

PC gamers should also be aware Capcom hasn’t ported all the extra DLC and events it made for consoles yet. The company’s said it plans to do this soon, but for now that means you won’t have all the extra free goodies you get on consoles.

Regardless of which system you use, there will be times you’ll come up against a monster that’s so formidable it will seem impossible to overcome. However, head back to previous locations, go on hunts against lesser foes and acquire enough materials to improve your arsenal, and soon enough that behemoth will fall.

If this fails, you can always team up with three other players and work together to take the monsters down. Monster Hunter: World’s sense of community is excellent – although its execution is a little fiddly at times. 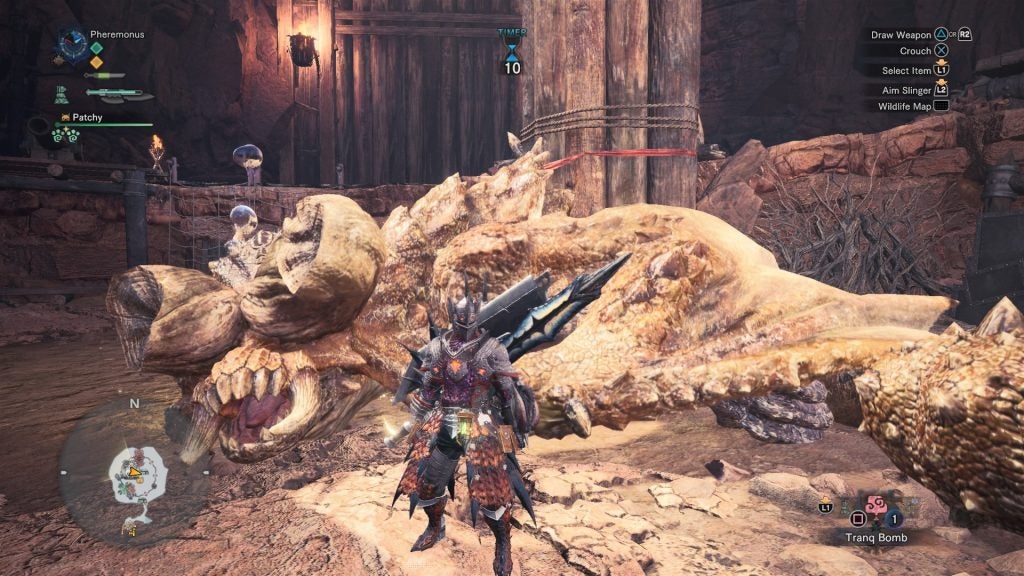 You can post a quest and invite up to three players to join, but everything is tied to the “quest master”, so if you didn’t post the quest then there will be much time spent waiting for other people to activate the start of the mission. If they’re still eating a stat-boosting meal or sharpening their tools or crafting traps, it can be annoying to be sat twiddling your thumbs. This is the reason communication is key; headsets are recommended for the experience to play out as intended.

But the choice is left purely to the player. There’s no greater reward for playing with friends. Whether you prefer to take on a monster on your own, or enjoy playing the numbers game to take down the monsters in each land, the choice is entirely yours – and both are truly excellent. Having that freedom, and also that sense of community, is rare in a modern game.

Not since Dark Souls and Bloodborne has a game fuelled such an old-school sense of discovery and pen-and-paper obsession. I was jotting down notes to learn how to craft items, where monsters are located, what I need to craft certain armour and weapons. I was learning which weapons work best against an enemy through experimentation and experience, rather than through Google. It’s an absolute joy.

If you haven’t tried Capcom’s Monster Hunter: World you really should. Whether it’s on PC or console the game remains one of the best RPGs you’ll ever play, and the most inviting the series has ever been.

It’s clear to see why the franchise has such a dedicated following, and now that fanbase is set to grow ever larger thanks to the incredible steps the developer has taken to make this game more welcoming to many more players.

For those with a penchant for punishment, a soft spot for stats, and a crush on brilliant combat – you simply have to buy this game.