Hi-Grade is one of the few independent PC companies surviving from the 80s. Like others of its ilk, Hi-Grade has been making and designing Media Center systems since the outset of the platform. Last year Riyad looked at its DMS II and while he was reasonably impressed he did have issues with the way it looked. This new DMS Extreme system will have its work cut out in that regard with the Sony Media Center I looked at recently easily taking the plaudits as one of the best looking media systems I’ve seen. 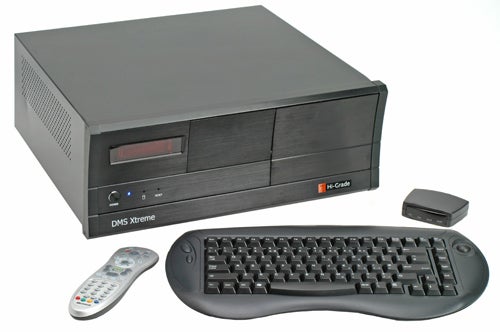 The look of PC might not be an important factor to all but when you’re buying a system that will be visible in your living room it is a genuine consideration. Of course, if you’re planning on hiding all your tech inside a cupboard, then it’s not really as much of an issue.


The Sony didn’t grab the headlines just for being a looker though – it also featured a Blu-ray drive and what do you know, so does the Hi-Grade. We’ve got a couple of notebooks with HD-DVD drives built-in (full reviews soon), but in terms of desktop systems so far it’s 2-0 to Blu-ray. Like Sony, Hi-Grade has a non Blu-ray version of this machine available at a far more reasonable price. Aside from the Blu-ray drive, the extra cash gets you a faster CPU, twice the RAM complement and double the hard disk capacity. However, whether it’s enough to justify the huge £935.30 difference between the two machines is debatable – especially since you can buy a stand alone Blu-ray player for around £850. 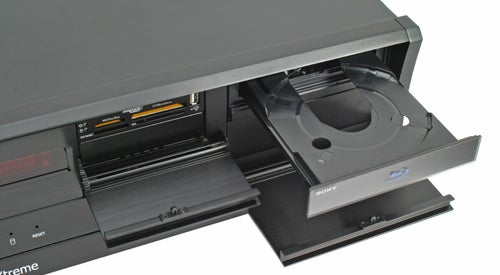 The DMS Xtreme range is more powerful than the standard DMS range and features Intel’s flagship Core 2 Duo processors. However, Hi-Grade has decided to go with the mobile ‘Merom’ variant of the chip in the guise of a T7200. This sports two cores running at 2.0GHz sharing 4MB of Level 2 cache. The difference with the standard desktop Conroe is that the front side bus is limited to 667MHz, rather than 1,066Mhz., though it’s still enough to handle multiple room access to the system.


The reason that Hi-Grade has gone with the mobile chip is that it ensures that the heat and noise are kept to a minimum (34W TDP compared to the desktop part’s 65W), which is definitely an important consideration for a media centre system. However, the downside is that mobile motherboard and memory parts cost more than standard desktop components, which inevitably has pushed the price up of the this system.This is the only explanation I can think of as to why this system is more expensive that the lavish looking Blu-ray equipped Sony Media Center.

Going with mobile parts also seems unnecessary considering that the regular desktop Conroe is already an efficient beast compared to the older Pentium D and Pentium 4. What’s more, having specified mobile parts it seems odd that they’re housed in such a large chassis as the LC03V Silverstone case used here. A half-height case would have been sufficient.

The large case does have an impressive fascia with a smooth anodized metallic finish. The power button is a smart large silver affair with discreet blue lights next to it. The reset button is placed behind a pinhole cover though, which makes it awkward to get to should it ever be required. The case has a large fold down flap that hides the two external optical drive bays, one of which is occupied by the Blu-ray drive. One of the annoyances of this case is that it doesn’t feature any front mounted USB ports. Hi-Grade has got round this by fitting a card reader with a single USB port integrated into it. This sits behind a second flap. The card reader will handle MemoryStick, CompactFlash, SD and Smart Media. There are no front FireWire or audio ports though.


In the left hand corner of the case is a small two-line VFD display. Hi Grade has set this up properly and it therefore displays what Windows Media Center is doing, such as the section you are in, what channel you’re watching or whether content is playing or paused. It also shows the time of day. 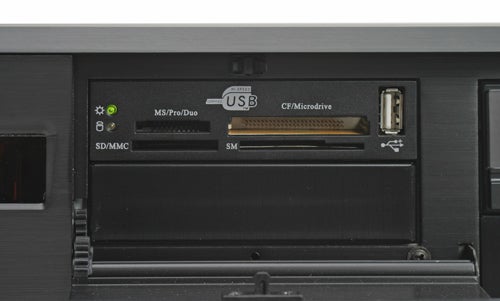 
Aside from this the internal set-up is impressive. There’s plenty of free space, which is good as this particular Silverstone chassis is not the easiest to work inside. The power supply is rated at 300W, which is sufficient for the components supplied, while the motherboard is an AOpen MOTD (that’s Mobile on the Desktop, not Match of the Day). It’s based on the i945GT chipset, with the chipset passively cooled. As it’s mobile based, it features two SO-DIMM sockets, which Hi-Grade has filled with two PC2-4300 1GB DIMMs. As it’s a Merom, only a standard CPU cooler is used, doing its job without making too much noise. 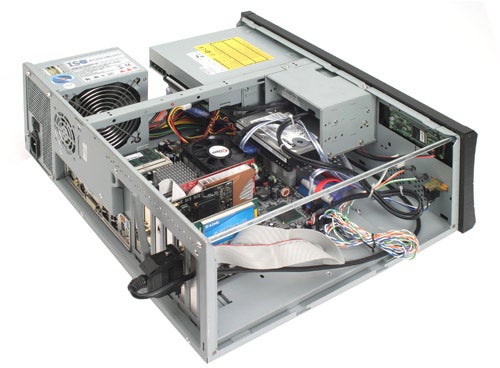 There’s one PCI Express graphics slot filled with an ATI Radeon X1600 featuring an HDMI port and a VGA port. It does have a fan to cool the GPU, but the noise level was minimal. The lack of DVI on the card is down to lack of space but indicates that it is clearly designed to be attached to an LCD or plasma rather than a regular PC monitor. However, a HDMI to DVI cable can be used. There is a DVI port on the motherboard, so you should be able to use it as a third screen using ATI Tripple View – in theory at least.


The next slot is a x1 PCI Express and this is occupied with a Black Gold TV dual DVB-Tuner card. This is a very good choice. Not only do you get two tuners on one PCB but it also picked up a large range of Freeview stations quickly and delivered a good strong picture. In the TR office, the signal strength from the roof aerial isn’t great, so it really separates the TV Tuner men from the boys. 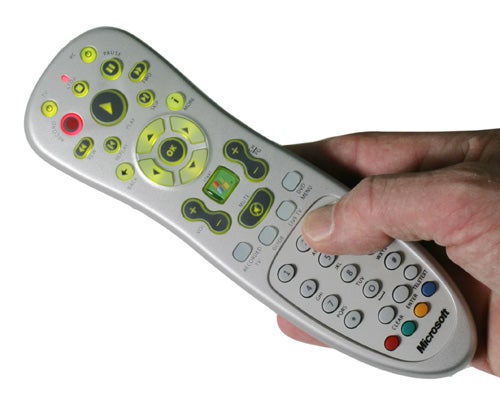 Next along are two PCI slots and one is filled with a D-Link AirPlus G Wi-Fi card complete with a small aerial at the back. On the Sony though, the Wi-Fi aerial is on an extended cable so you could position it for the strongest signal.


Hard disk storage is provided by two gargantuan SATA 500GB hard disk drives, one for Windows and applications and the other for media.


The star of the show though is undoubtedly the Sony BWU100A Blu-ray drive. This will both play and burn 25GB and 50GB Blu-ray discs. It’s only rated as a 2x burner, and 4x drives are available now. You can also burn dual-layer DVD discs at 4x and single layer DVD at 8x. CD recordables are created at 24-speed. This isn’t very quick but that’s hardly the focus of this multi talented drive. 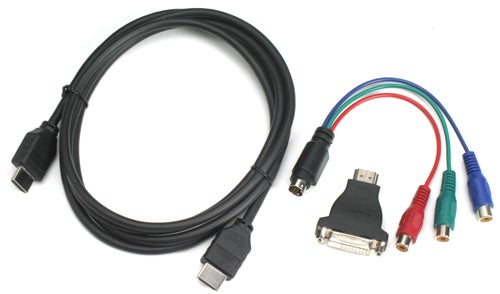 Round the back of the system you’ll find S-Video inputs and outputs on the TV Tuner card, and an S-Video output on the graphics card. There’s an Ethernet socket and connections for the analogue audio capable of delivering eight channels of sound. There’s also a Coaxial digital audio output but no optical. There are four USB 2.0 ports and one FireWire. There are also DVI, VGA and S-Video ports on the back of the system but these are from the graphics chip – just make sure that you remember to connect your monitor/TV to the graphics card instead, unless you want to try a multi-monitor scenario.

Unlike many of the Media Centers I’ve looked at recently, the receivers for the keyboard and the remote have not been integrated. Instead, two unsightly black boxes have to be connected to two of the USB ports at the rear. It certainly works but again, it’s far from elegant and I would have preferred to have seen the case modded to fit them.


More disappointing though is the quality of the keyboard. It’s a small, cheap and plasticky affair with an oily finish. Also, the mouse buttons on the left are rattly. The worst offender is the mouse ball on the right – it has a poor feel and is hard to control. 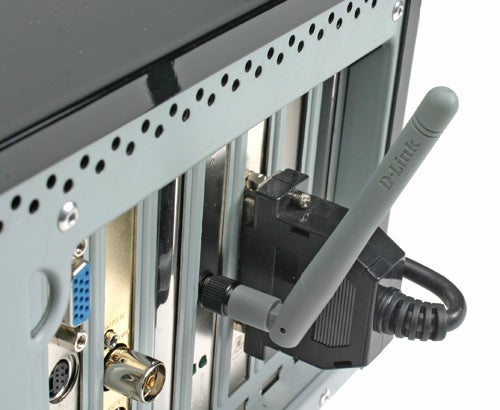 A wireless keyboard such as this would have been acceptable even a year ago, but as we’ve seen from recent reviews things have moved on. In fact, this was my overall issue with the Hi-Grade DMS Extreme. There’s certainly no arguing with the choice of components Hi-Grade has gone with, but by going with an off-the-shelf case the system falls short of the tight custom made integration that we’ve seen from the likes of Sony and Acer. It simply looks too home made. This would have been forgivable were the Hi-Grade cheaper, but in fact it’s over £100 more than the Sony Media Center, which in terms of looks and integration is leagues ahead.


The Hi-Grade is a competently built Media Center system with a string of choice of components. However, even taking into account the Blu-ray drive it feels overpriced. The external remote dongles and the poor keyboard particularly jar. Compared to the more attractive, better integrated and less expensive Sony Blu-ray Media Center the Hi-Grade really struggles to make a case for itself.


”’Update:”’ Hi-Grade has contacted us to let us know that a more affordable version of the DMS Extreme is available with the same CPU (Core 2 Duo T7200) but with two 250GB hard disk drives and 1GB of RAM for £1,598 including VAT.