If the camera is the priority for you then I’d still recommend the Pixel 3. However, for everything else the Galaxy S10 Plus is king. It has the best screen, it looks downright stunning, and offers generous storage, RAM and plenty of customisations. Once again, Samsung has managed to tick all the boxes - what more could you want?

If you’ve seen any of the advertising for the new Galaxy S10 series then it’ll be the Galaxy S10 Plus that gets headline billing. This is the phone Samsung is really pushing and that makes complete sense considering everything this phone can do.

This is the Samsung Galaxy S10 device with the biggest battery, largest screen and most cameras. It can also be stacked with 12GB RAM and 1TB storage – making it ideal for storing all your games, photos and videos.

Of course, this has now been replaced by the Samsung Galaxy S21 and Galaxy S21 Ultra.

This might just have been the best Android phone when it was first released. Read on for our original review.

The Samsung Galaxy S10 Plus is a lovely phone. It’s a curvaceous slab of glass, with a metal rim and a screen that runs just about edge-to-edge. Put next to an iPhone XS Max and Apple’s latest phablet looks chunky, blocky and kind of ugly in comparison.

The Plus model sits above the regular model in terms of size, offering a 6.4-inch screen as opposed to a 6.1-inch one. It’s a big phone, yes, but the curved back and front help it nestle comfortably in your palm. If you’re coming from a Plus or Max-sized iPhone, or an older Plus-sized Galaxy, then you’ll feel right at home.

A big change this year is the new camera array on the rear of the device. It now stretches out in a black oblong and features three camera sensors, a flash and a heart rate monitor. You’ll also notice the lack of a fingerprint scanner below the camera, giving the rear of the handset a much cleaner look. We’ll come onto that in a moment. 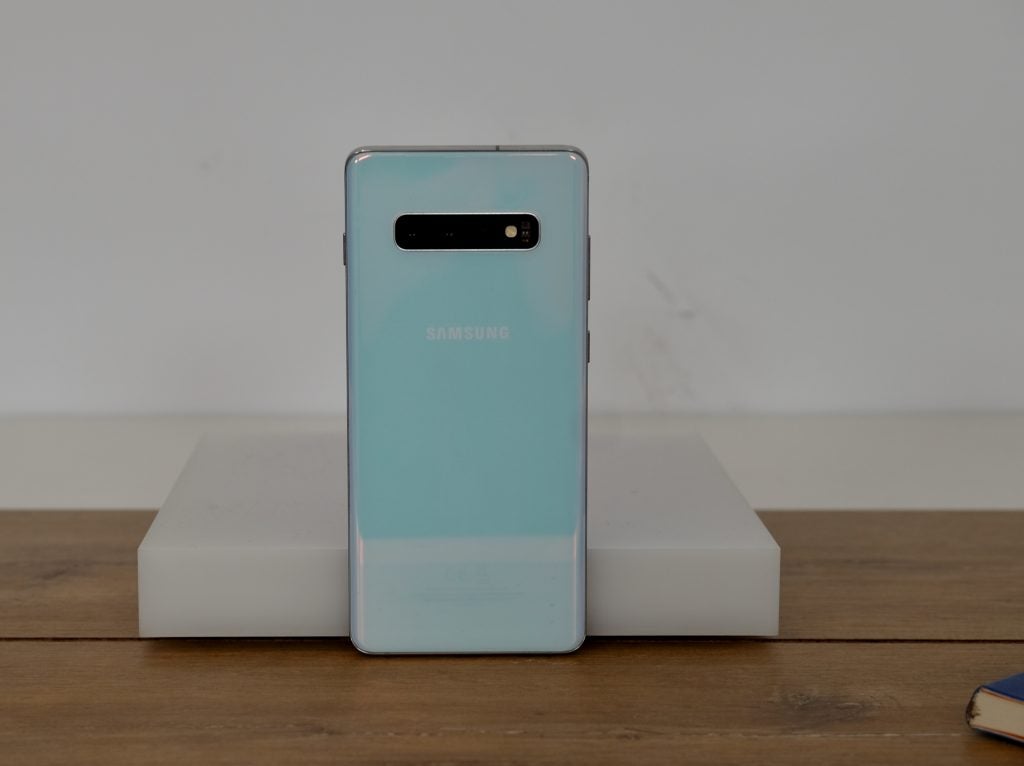 There’s a USB-C port along the bottom, a 3.5mm headphone jack next to it and a microSD/SIM slot on along the top edge. Similar to the last few Galaxy flagships, the S10 Plus is IP68-rated for water-resistance, boasts Qi wireless charging, and packs an extra button on the side for quickly enabling the Bixby virtual assistant.

Even though the overall design hasn’t radically changed since the Galaxy S8 two years ago, the S10 still feels fresh and modern. Importantly, it doesn’t sacrifice ergonomics for style, managing to remain impressively comfortable to hold even with its clear focus of looking good.

That Samsung has managed to keep around extra luxury features such as wireless charging and expandable storage proves this is one of the most complete phones on the market. 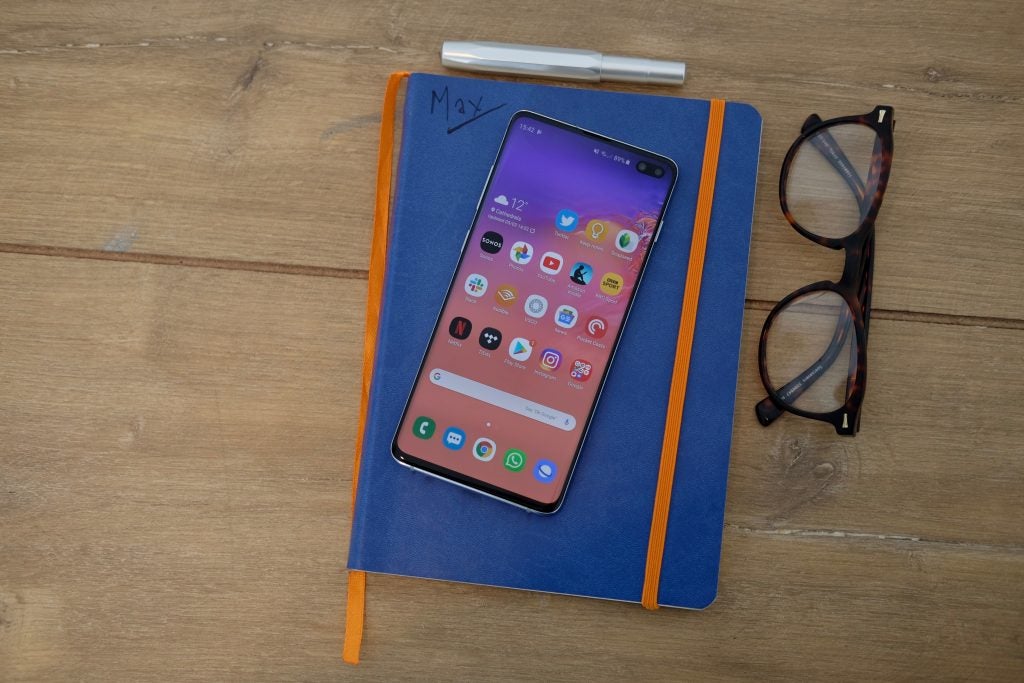 The S10 Plus is available in a number of colour options, with all sporting predictably fancy names. Basically, they translate as white, black and dark green; in the USA, the S10 Plus comes in a neon-pink option, too. Opt for the higher RAM and storage version and you can get your hands on a less glossy Ceramic Black or White version as well.

I’ve been using the white version for this review and I can’t say that I’m a fan. It has a pearly finish with a hint of blue and looks a little cheap – especially next to the far more appealing Prism Green option.

Samsung Galaxy S10 Plus’s Screen is the best around

The star of the S10 Plus is the utterly gorgeous 6.4-inch screen. Samsung’s displays remain the best in the business and this one ticks pretty much every box I’d be looking for in a great screen.

As with previous flagship phones from the company, the panel here uses OLED tech (Super AMOLED, as Samsung calls it) ensuring perfect blacks, colours that pop and proper support for HDR video. It slopes gently at the sides, giving the impression the panel is melting into the metal edges. 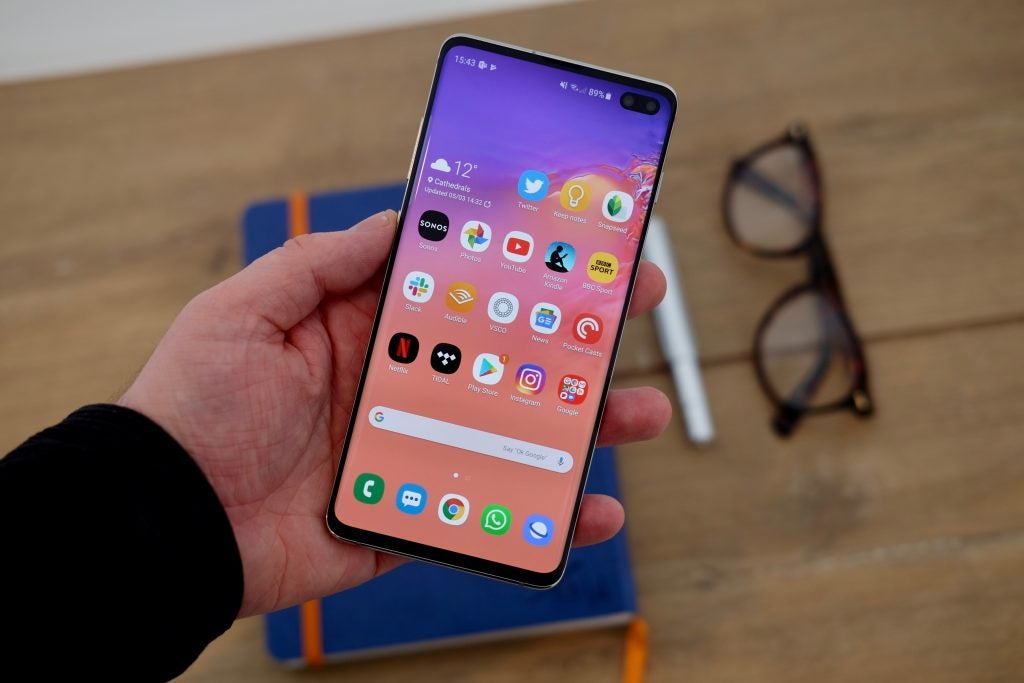 I’ve never been completely sold on these curved edges. Yes, they look slick and allow Samsung to cram in a larger screen without making the phone too unwieldy, but in actual use they’re not as practical as having a flat panel. I frequently tapped the edges with my palms accidentally and typing accurately becomes more difficult when the keys flow over the sides.

Samsung is claiming that the display can reach 1200 nits of brightness, which is a notable improvement on the 1000 nits claimed for the S9. Having a brighter screen not only results in better-looking HDR video, but it ensures the S10 Plus remains usable in sunlight and general outdoor situations.

I’ve been in Barcelona for much of the S10 Plus’ review process, and it has performed brilliantly in the super-sunny conditions, particularly in direct sunlight. The brightness cranks all the way up and the S10 Plus remains entirely viewable.

To try to get the highest screen-to-body ratio possible (here it’s 93.1%), Samsung has removed much of the phone’s top bezel. As such, the front camera now sits in a pill-shaped cutout in the corner of the screen, which functions quite closely to how it works on the Honor View 20. That cutout is larger here than it is on the Galaxy S10, since the Plus has two cameras: a 10-megapixel sensor paired with an 8-megapixel one for depth-sensing.

I remain torn over this type of notch. The screen here is glorious, but the cutout does get in the way. Apps that are overly reliant on white colour schemes result in it standing out significantly; I’ve found it difficult to stop my eyes from constantly being drawn to the black cutout.

Apps such as Netflix and Amazon Prime treat the cutout as a notch, resulting in slightly lopsided video when streaming – which takes away from the experience. With YouTube you can expand the video all the way around, which looks better.

Games, too, struggle with the cutout, again treating it in the way they would a notch. There will be a black bar at the top, with all the content shunted to one side. 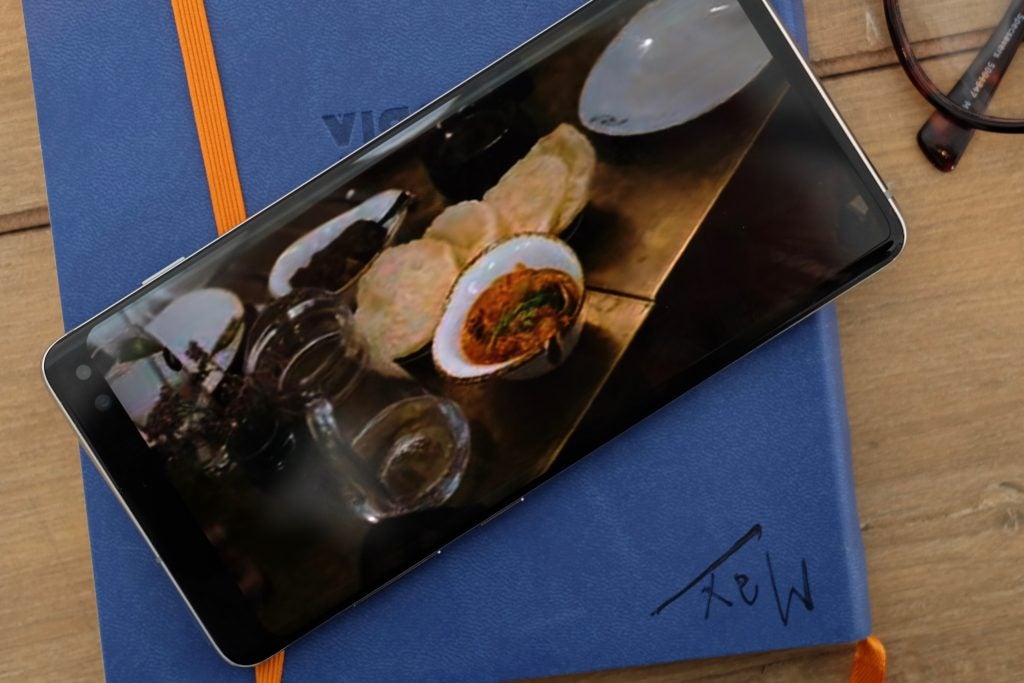 The final trick of the display is the ultrasonic fingerprint sensor. This replaces the rear-mounted sensor on the previous generation of device, and it follows Huawei and OnePlus in putting the tech into the display.

Both Huawei and OnePlus (along with Xiaomi, Nokia and many others) use optical in-display fingerprint tech: this shines a bright light up through the screen to read your digit.

Samsung has used an ultrasonic sensor, giving it a few key advantages. First, and most vitally, it’s far quicker in operation and notably more reliable, requiring less of a strong press and hold to recognise. It also doesn’t need to shine that light, so it’s less distracting if you’re unlocking your device at night. Finally, it works even when the screen is completely off – something sorely missing elsewhere.

Overall, the solution is still some way off being as quick and reliable as an actual capacitive sensor – I still experienced plenty of misreads. However, it’s better than it could have been and allows for a cleaner look around the back of the device – and the feel of the inclusion of forward-looking tech.