What is the Garmin Vivoactive 3?

The Vivoactive 3 is Garmin’s first sports watch to include the company’s contactless payment system – Garmin Pay – designed to rival the likes of Apple Pay, Google Pay and Fitbit Pay.

Otherwise, it includes all the features you’d expect of a higher-end sports watch including GPS/GLONASS, a heart rate monitor, training features such as VO2 Max estimations, and all-day stress monitoring. This is all topped off with basic smartwatch functionality and up to seven days of battery life.

The Garmin Vivoactive 3 takes the form of a more traditional-looking, round-faced watch – a departure from many of Garmin’s other, more standard fitness tracking wearables. There’s a pretty thick silver bezel around the circumference of the screen, which would have been a prime candidate through which to interact with the menus, much like Samsung’s Gear smartwatches. 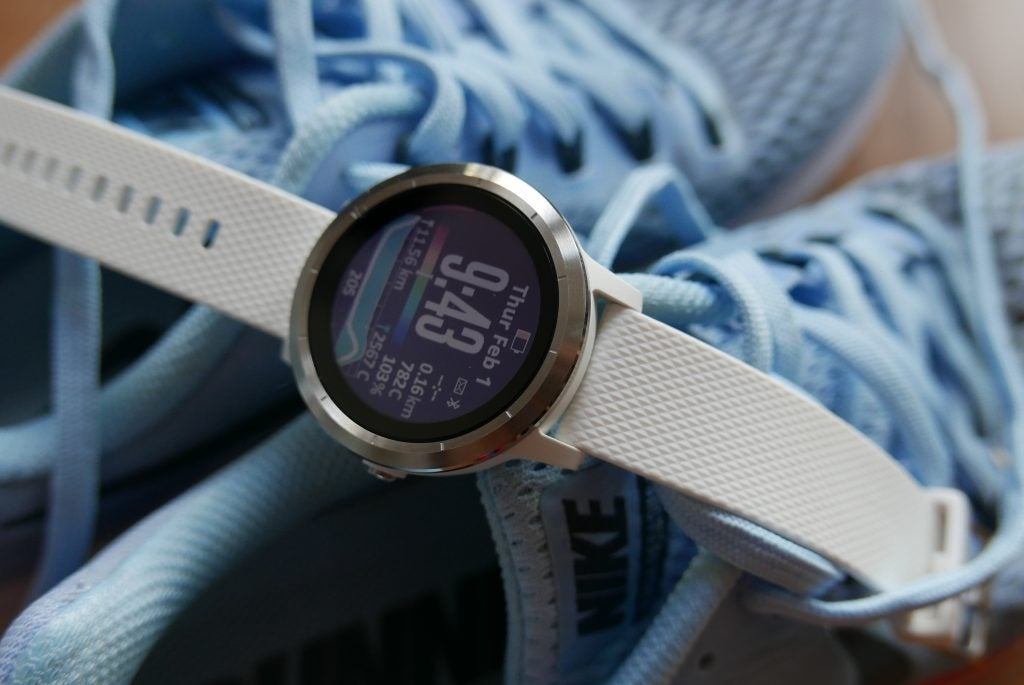 Instead, Garmin has introduced what it calls ‘Side Swipe’ controls, where a gesture sensor has been embedded along the left side of the watch’s casing. This lets you brush your finger against the edge to scroll up and down menus, with a little haptic feedback when swapping between screens. I have to wonder if its inclusion has made the Vivoactive 3 chunky. Although at 11.7mm thick, it isn’t the most bulky smartwatch out there.

There’s also a single physical button on the side for accessing menus. This means you’re more reliant on the touchscreen than is the case with most sports watches, which typically feature more physical buttons to make interaction easier during a workout. The Side Swipe interface works well in this instance for swapping between different metrics during a run. 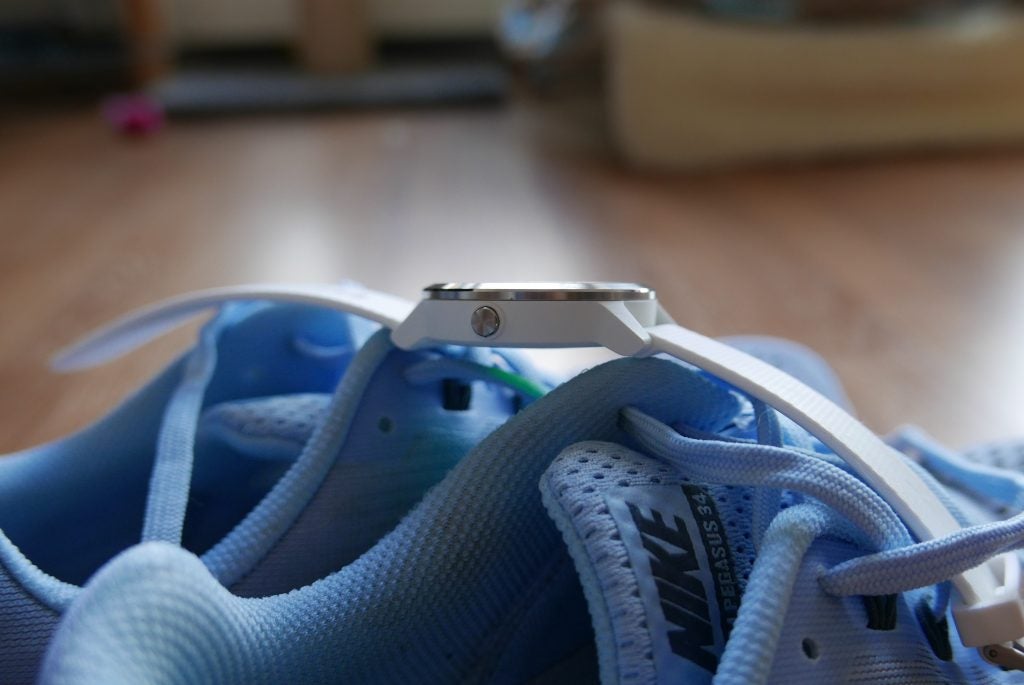 The Vivoactive 3 comes in a choice of either black (two different varieties) or white finishes, both with that silver bezel. I was sent the white model, but I prefer the black.

The wearable weighs only 43g, so it’s comfortable and won’t prove distracting throughout the day or during a workout. On the downside, the light weight does mean the Vivoactive 3 feels a little cheap and flimsy, which is compounded by its plasticky construction (apparently, it’s a fibre-reinforced polymer).

The watch comes with a matching quick-release silicone strap, but you’ll be able to swap this out for standard 20mm options.

The screen is a 1.2-inch transflective, memory-in-pixel, always-on touchscreen display. Its 240 x 240 resolution isn’t the sharpest, and its colours aren’t the most vibrant. However, these all help with the Vivoactive 3’s battery life by not sapping too much power. There’s a backlight that kicks in when you rotate your wrist, but even in its dimmed state, it’s perfectly readable in most situations – even outdoors. 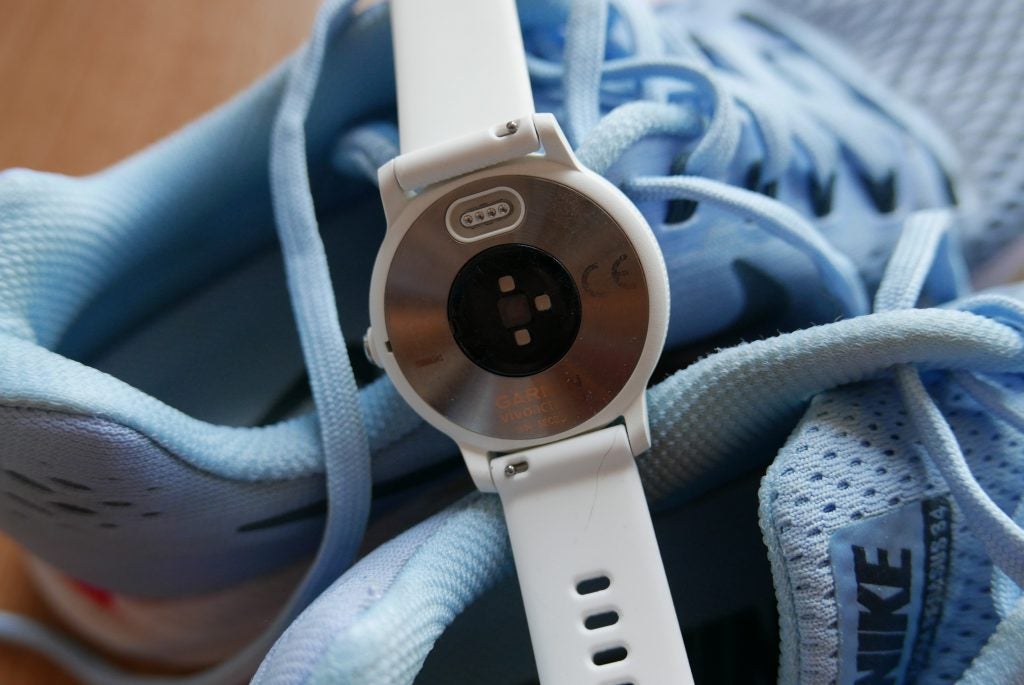 Around the back, there’s a heart rate monitor – as you’d expect – and a pogo pin-style connection for attaching the charger. The Vivoactive 3 is water-resistant to 50m, which is great news for swimmers – and for the fact that you don’t have to take it off to shower.

As mentioned, you have the choice of either navigating the Vivoactive 3’s menus with the Side Swipe or simply by swiping up and down the touchscreen with your finger.

The menus are organised in a vertical manner for this reason, letting you swap from the main clock screen to easily seeing data such as your day’s activity progress, heart rate data, stairs climbed, upcoming appointments and the weather. 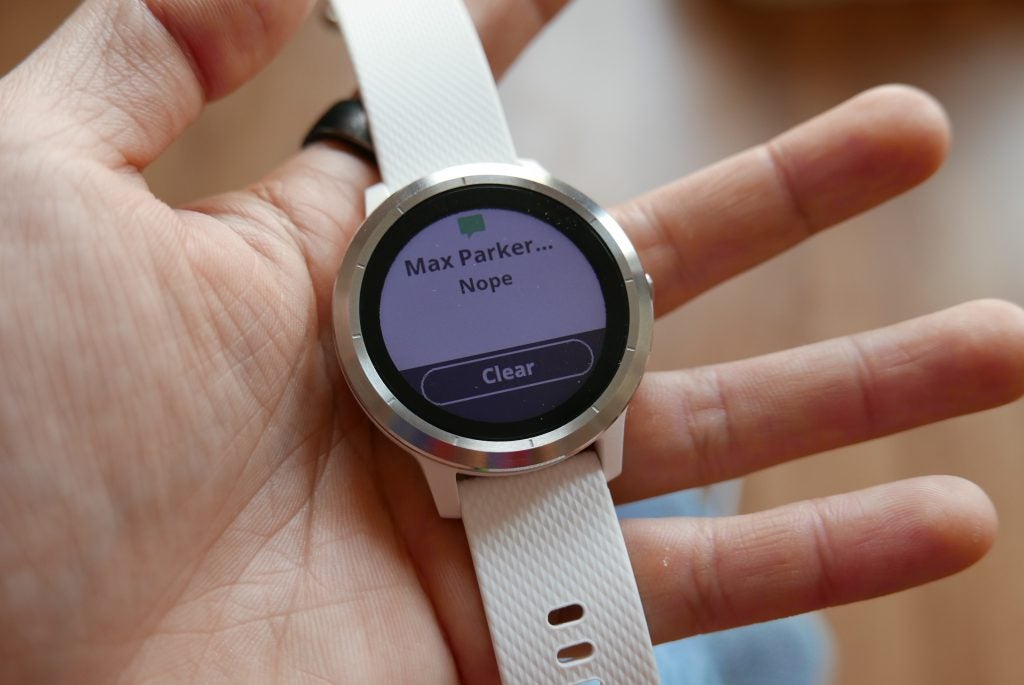 You can also access some of the smartphone functionality, such as media controls and a list of the latest notifications. The Vivoactive 3 is able to mirror the notifications received to your paired smartphone and display a decent amount of information. However, it’s an all or nothing affair – there’s no enabling or disabling notifications on a per app basis.

Certainly a lot more than what you get on Garmin’s fitness trackers, with their vertical-oriented screens. There’s no way to interact with incoming messages from iOS, however – I was using an iPhone 7 Plus – but you can reply on Android.

Wherever you are in the Vivoactive 3’s menus, a press of the side button will take you back to your watch screen. Pressing the button from the homescreen quickly takes you to a workout screen. You can also access a quick menu by tapping and holding the screen, and another menu by holding the side button. It will take a bit of time to wrap your head around all of this, but it’s intuitive enough. 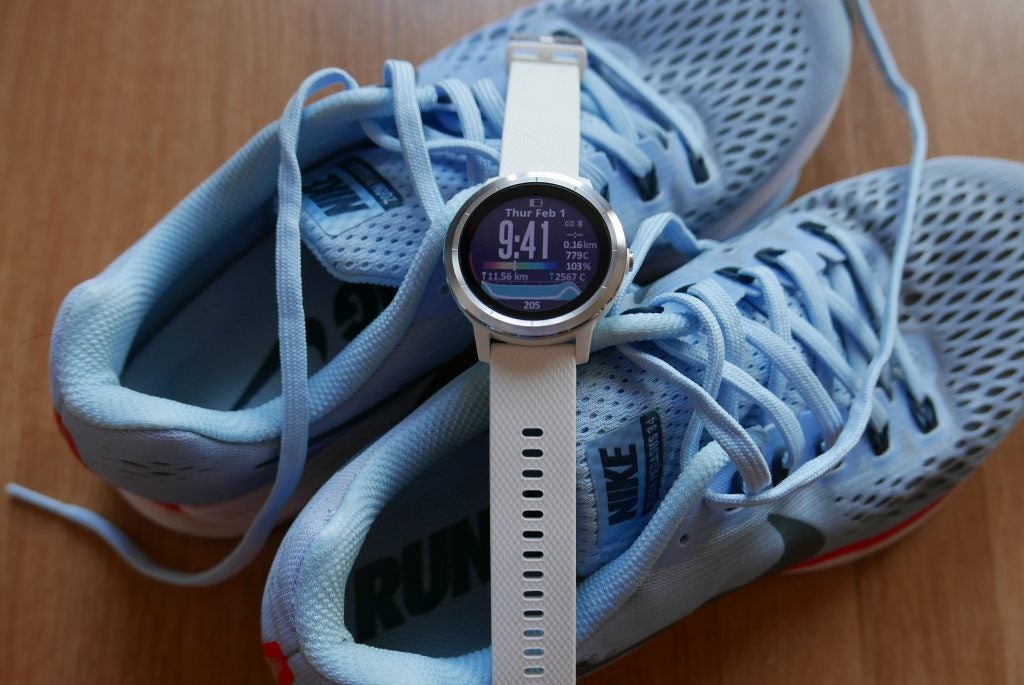 Of course, to get the most out of the Vivoactive 3 you need to pair it with the companion Garmin Connect app for iOS or Android. Not only does this sync all of your activity and workout data, but it also lets you install new watch faces from the Connect IQ store.

You’ll also need to use Garmin Connect to configure settings, such as which wrist you wear it on and which way round during the initial setup. You can also change what’s accessible by swiping up and down from the watch face, letting you reorder or add and remove ‘Widgets’, as well as add new apps from the Connect IQ store.

The app is also used to set up Garmin Pay, letting you input your card details. However, Garmin Pay really isn’t ready for the UK, supporting only Mastercards from a niche bank at the moment; there’s no support for any of the UK’s high-street banks, making it pointless. Hopefully, this will improve and will mean being able to make contactless purchases. 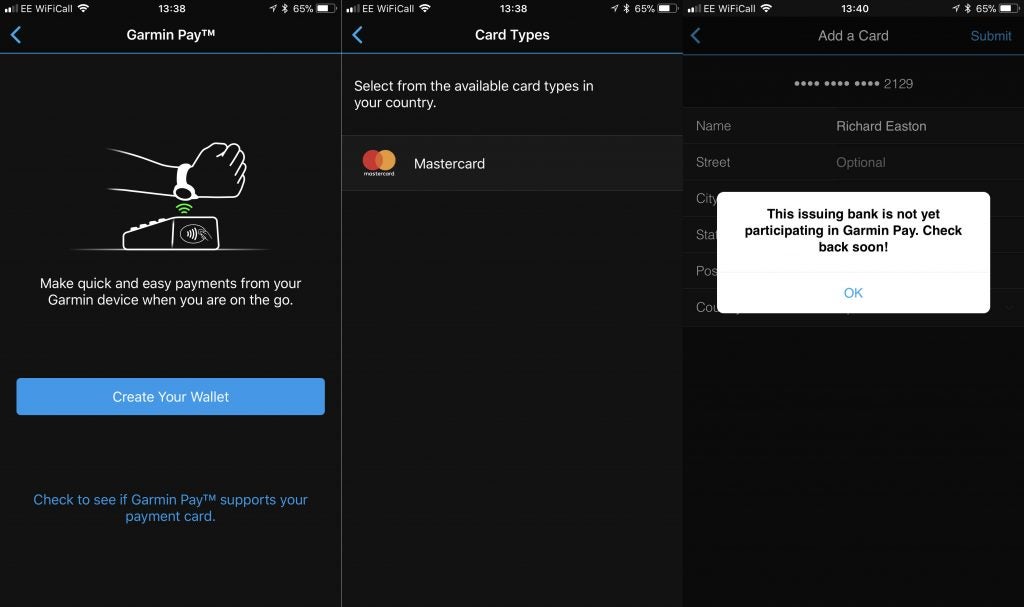 Fitbit, too, suffers this lack of support by banks for its Fitbit Pay service on the Ionic, and a dearth of apps available too. At least the Vivoactive 3 has the edge on Fitbit’s still very early app ecosystem, even if there is a shortage of particularly compelling apps.

While you’re able to use the Vivoactive 3 to control the media on your paired smartphone, it’s a shame there’s no onboard storage for your own music to deliver a phone-free experience when exercising. That’s a featured being introduced with the Garmin Forerunner 645 Music.

In terms of all-day tracking, the Vivoactive 3 is noting the number of steps you take throughout the day, your resting and active heart rate, and the amount of sleep you’re getting overnight. 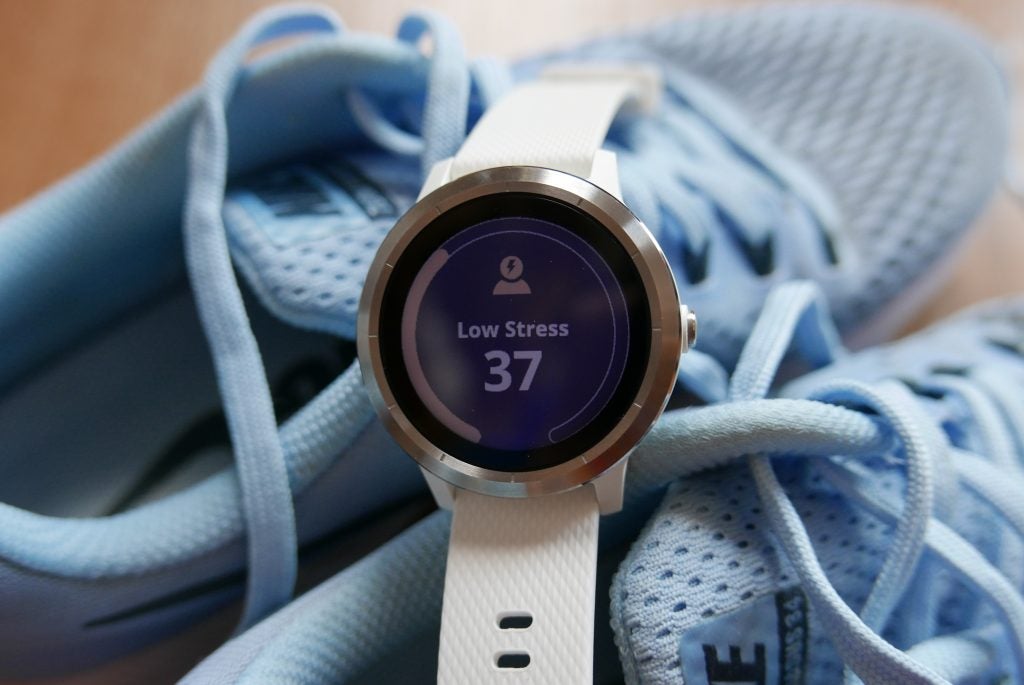 The day-to-day experience is very similar to the Garmin Vivosport, with a dynamically adapting step goal that tries to stop you from becoming demotivated if you keep coming up short – or, conversely, shifting the goal posts if you regularly hit it. Move reminders are available to help give you a prod towards your step goal whenever you’re sat down for too long.

The metrics captured are all synched with the Garmin Connect app, just like every other Garmin wearable. The good news is that Garmin Connect has been going through a reinvention of late. The interface is much-improved, with a revamped ‘My Day’ screen that pulls together everything in a more easily consumed way in individual cards for each day and workout. 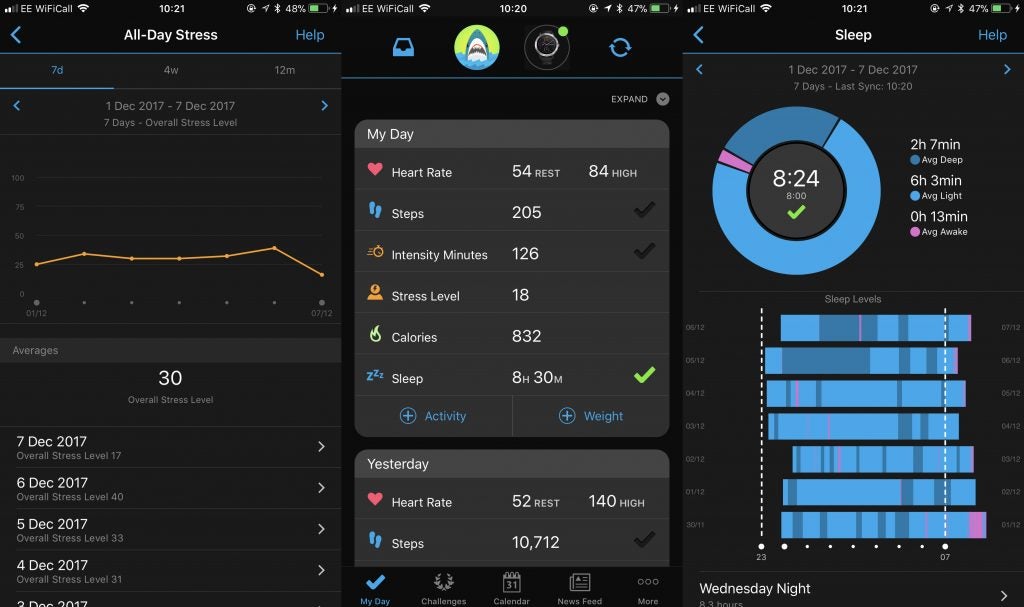 It means data such as resting heart rate, number of floors climbed and hours slept are all pulled together. Previously, it meant jumping around the Garmin Connect app. An easy-to-spot tick makes you aware that you’ve reached your targets. Each of your workouts has a card that lets you expand it to see more of the information.

In terms of activities and sports, the Vivoactive 3 comes with the preloaded ability to track 15 activities, from favourites such as running, biking and swimming, to equipment-based workouts such as the stair climber, elliptical machine and rowing machine. Anything outdoors will tap into the Vivoactive 3’s GPS capabilities for more accurate speed, distance and location data. 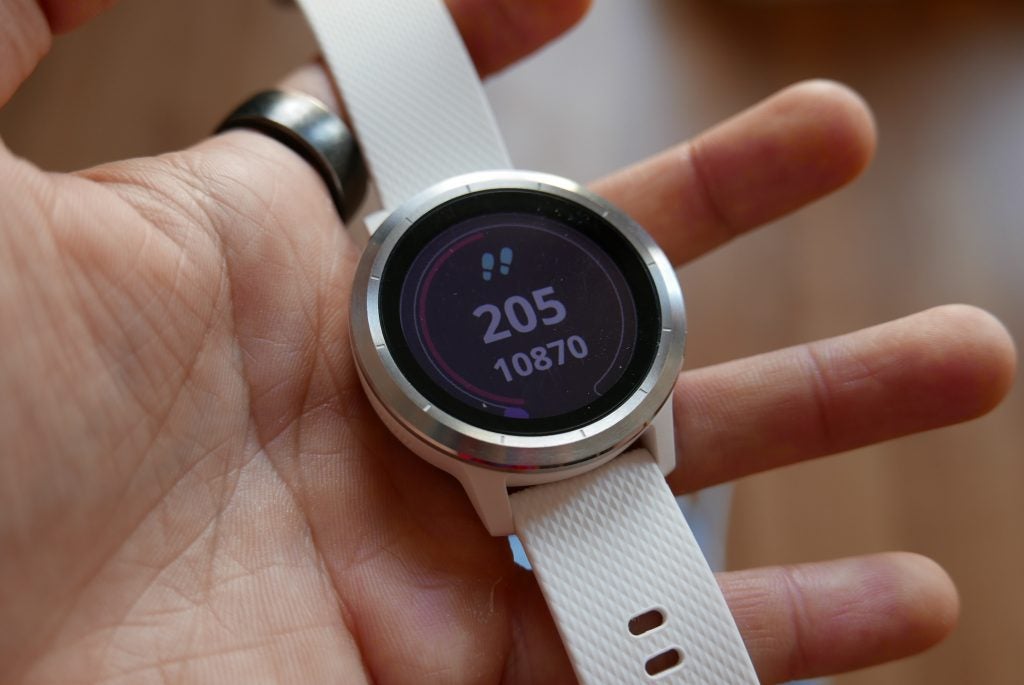 Before embarking on a workout, you can customise the metrics displayed on each screen, as well as adjusting their readability by changing font colours. You can even customise the alerts you receive, such as a buzz to let you know when you’ve hit certain distances or heart rates. The latter means it’s a useful companion for anyone who partakes in specific heart rate zone training.

Taking the Vivoactive 3 for a few test runs, the GPS can take a little time before achieving a satellite lock –which can result in some waiting around before you set off. It’s no way near as bad as the worst running watches I’ve tested at least.

Once out, swiping between displays makes it easy to check progress and distance, and that easy-to-read display comes into its own as you’re pounding the pavements. The heart rate monitoring didn’t deviate drastically from what I saw from a Polar OH1; however, for activities such as swimming the heart rate monitor is disabled, so in this instance I paired the OH1 as an external monitor. 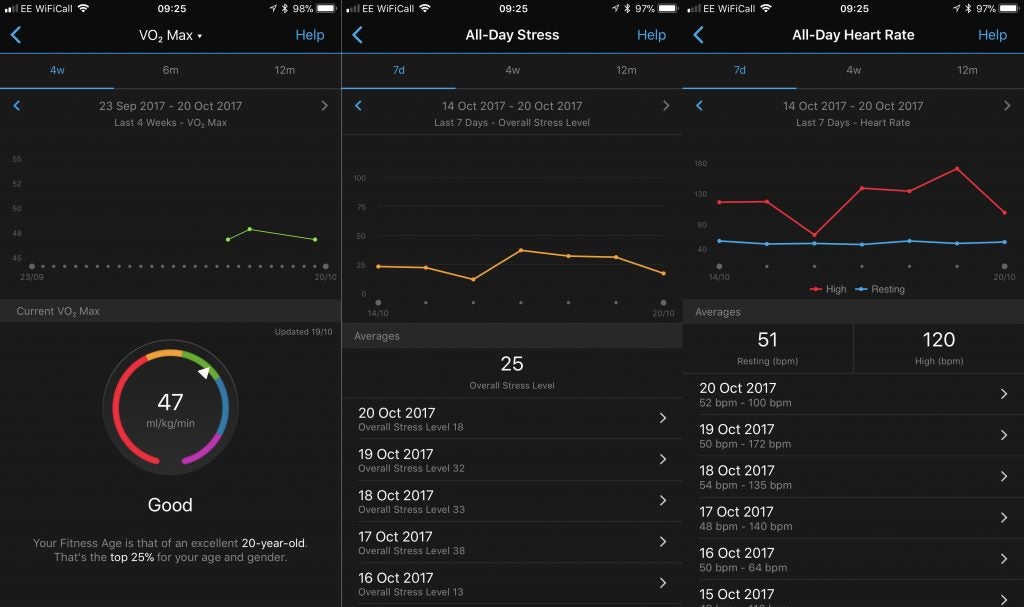 Post-workout, the Vivoactive 3 uses the Firstbeat algorithm to calculate your VO2 Max. This uses a special formula that looks at your heart rate performance and the distance covered to generate a score, which measures your overall cardiovascular health.

Essentially, this is a great way to keep tabs on your overall fitness, and also presents you with a fitness age so you can compare yourself to your demographic’s fittest individuals. It’s one of the more useful measurements available for anyone wanting useful historical data.

Garmin rates the Vivoactive 3 as having up to seven days’ battery life when used for day-to-day activity tracking. I found this a little optimistic in use, experiencing between five to six days when I wasn’t taking it out for a GPS-tracked run.

That’s still pretty good overall, and means you won’t often be caught short on charge. Super-impressive is the 13 hours of GPS battery life you can expect, which is fantastic when some smartwatches struggle to achieve around four hours (bad news for marathon runners).

With a dead battery, I noticed the Vivoactive 3 charged pretty quickly. Plugging in its pogo-style charger, it topped up half of its battery in less than half an hour.

Why buy the Garmin Vivoactive 3?

As a sports watch first and ‘smartwatch’ second, the Vivoactive 3 gets plenty right. It features almost everything you’d want from a workout tracking perspective, save for some of the more advanced coaching aspects seen in Garmin’s more expensive dedicated fitness wearables.

The basic, but effective, smartwatch functions are a nice sweetener – but certainly aren’t the priority here. Overall, the Vivoactive 3 is comfortable to wear, and up against the similarly priced Fitbit Ionic, I’d say it’s the more fully realised fitness smartwatch. 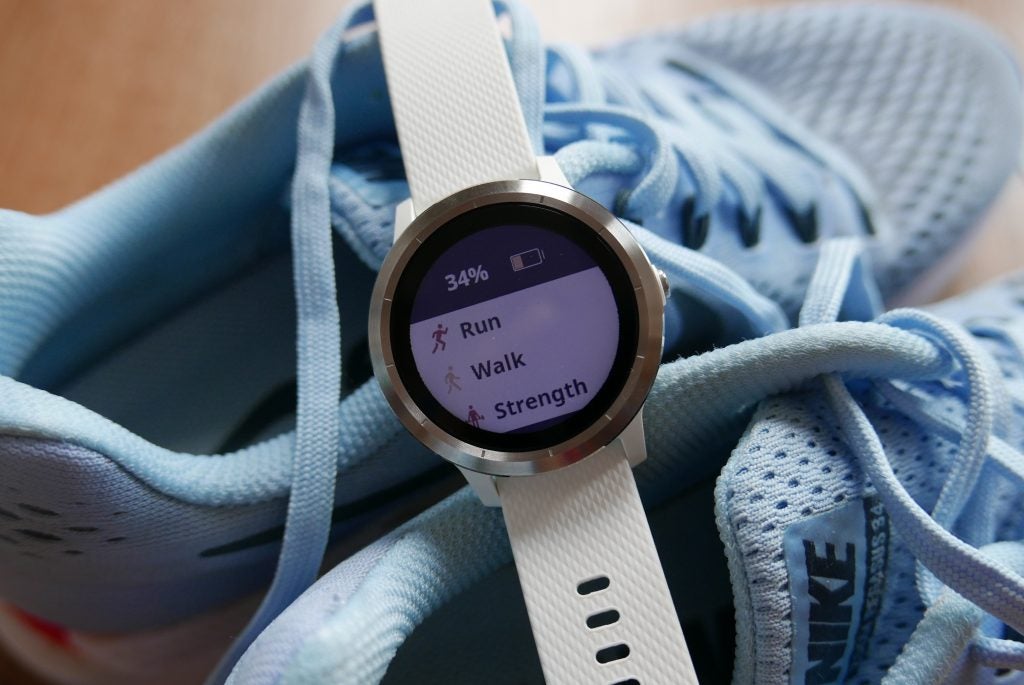 If you’re prioritising the smartwatch side, it’s encroaching rather closely on Apple Watch territory. You can probably pick up an Apple Watch Series 2 for around the same money, or even stretch to the Apple Watch Series 3 GPS model (if you’re an iPhone user). For Android users, there’s the Samsung Gear Sport, which better ties together sports and smartwatch functionality.

But with any smartwatch, you’ll be sacrificing battery life – and it’s here the Vivoactive 3 has a considerable edge.