What is the Apple Watch 3?

Apple Watch is now in its third iteration, and while it may appear that not much has changed on the surface, there have been some developments under the hood.

The big draw for the Series 3 is the option of LTE connectivity. This means greater independence from your paired iPhone, and always-on connectivity wherever you get network coverage. The best news of all is that your Apple Watch 3 will share the same phone number as your iPhone, doing away with one of the biggest grievances of previous LTE-enabled smartwatches: juggling multiple numbers.

If you’re in the UK then it’s worth noting that only EE supports LTE connectivity for the Apple Watch Series 3, and this will cost £5 in addition to your standard monthly network tariff. The feature is more widely supported by US carriers and you can expect to pay an extra $10 on top of your usual contract for a smartwatch plan. It seems odd that nearly a year after release you can still only use the LTE functionality if you’re on EE in the UK. 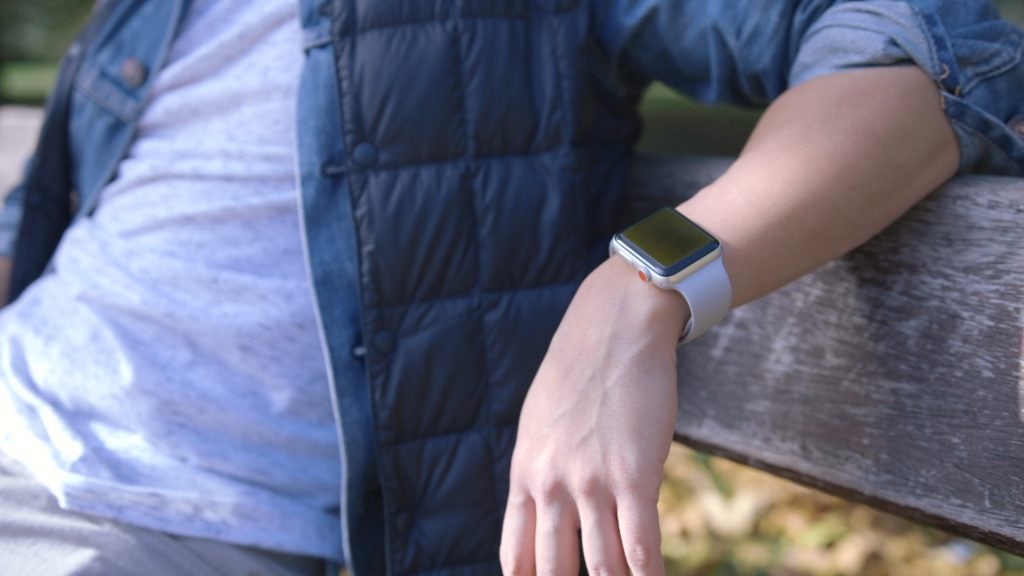 While the Apple Watch 3 GPS + Cellular (£399/$399) offers the full raft of new features, there’s also the Apple Watch 3 GPS (£329/$329) model for consideration. This does away with the cellular capabilities but includes all the other improvements over the now discontinued Apple Watch Series 2. It has half the storage capacity (8GB) of the Cellular model, and launches at a lower price than last year’s model (originally costing £369). It’s potentially a more tantalising prospect for those not enamoured by LTE or a hiked up monthly bill.

Ultimately, the Apple Watch 3 remains a difficult sell as a must-have device – even if I do find myself missing it when I take it off. But, whether or not you feel the need to be always connected, the Apple Watch Series 3 – in both its guises – offers the best smartwatch experience to date. While not perfect, it delivers a welcome balance of smartwatch convenience and fitness tracking to make it a versatile companion.

As mentioned, not a great deal has changed in terms of the Apple Watch’s design. While nearly every other smartwatch maker has transitioned to a circular design, Apple has stayed the course since the device’s launch in 2015. For me, the Apple Watch 3 remains one of the more tasteful smartwatch designs out there.

Each iteration of the device has seen its thickness creep up, but it’s such a negligible amount that you’ll only notice if you place each model side by side. Consider the hardware enhancements being packed into newer models, and it’s really an impressive feat of engineering that the Apple Watch 3 remains one of the more svelte smartwatches.

In the Watch Series 3, the LTE antenna has been squeezed in behind the screen, barely impacting the device’s overall thickness. The positive side effect of this move, which may come as a surprise, concerns comfort. In other LTE-enabled smartwatches, the antenna has often been placed inside the strap joint, making the join with the watch casing stiff and uncomfortable. This isn’t an issue with the Watch Series 3. 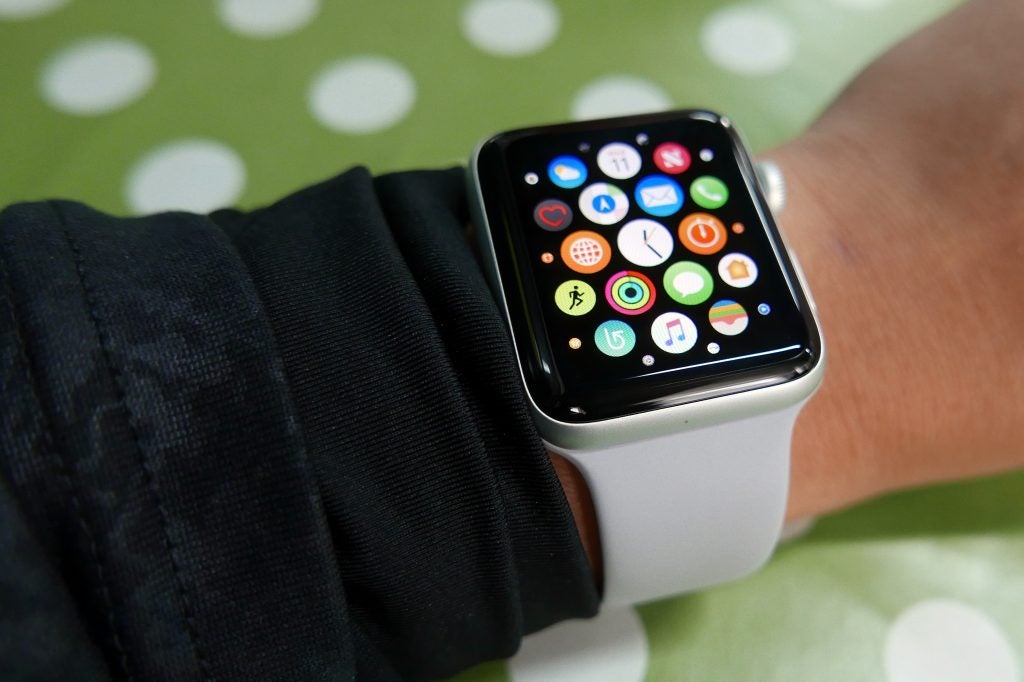 Apple has also opted to include an eSIM, which is physically smaller than a nano-SIM. The embedded eSIM isn’t a component you’ll ever need to swap out; instead, changing providers is done on the network’s side. Setting up the Apple Watch 3 for LTE usage is completed through the Watch app on your iPhone. It takes you through the process of signing up to a smartwatch plan with your provider, which in my case meant adding the £5 Smartwatch Plan on top of my ongoing EE contract.

Related: What is an eSIM?

If you don’t go through this part of the setup process then your Apple Watch won’t make use of its LTE modem. Instead, it will operate much like the cheaper Apple Watch Series 3 + GPS model – although you’ll have the option of signing up for an LTE data plan at a later date (perhaps when other UK network providers get on board).

Beyond the thickness of the device, the only other visual separator from the Watch Series 2 is in fact only present if you opt for the LTE-enabled model. The Apple Watch’s Digital Crown gets a splash of colour, with a red dot denoting your always connected capability.

Is this visual flourish really necessary? Probably not. But I’ll hazard a guess that some folk will secretly enjoy letting the world know that they have the latest and greatest adorning their wrist. Personally, I actually quite like the slight visual break offered by the red dot. Especially on the silver aluminium model I have for review, which has spent most of its time paired with a Fog grey silicone sports band. 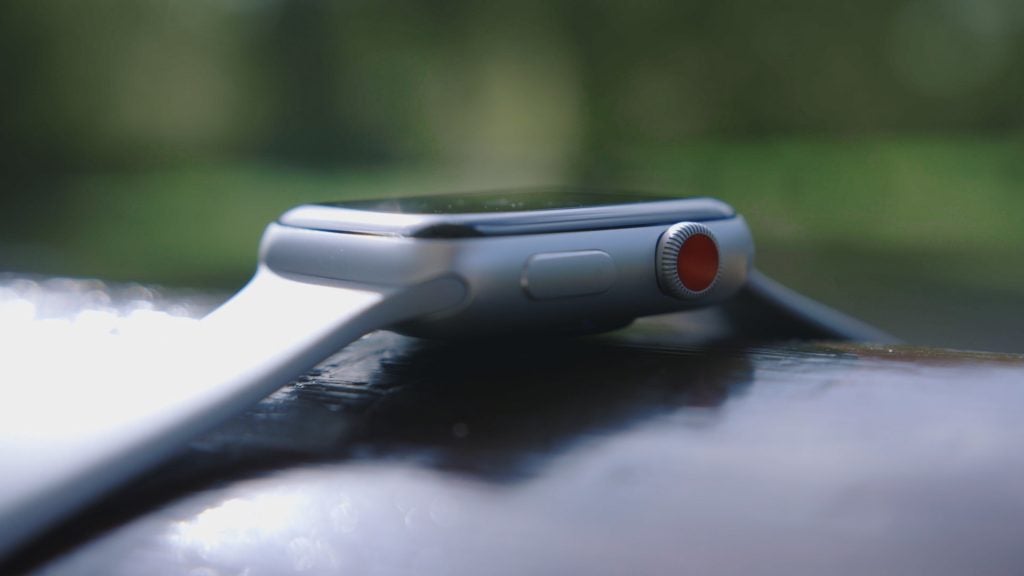 Below the Digital Crown is the side button that’s been re-appropriated in use over the years. It can now either bring up your dock of favourite apps or your most recently used apps. The other side of the watch casing houses the speaker and microphones. Flip the watch over and the optical heart rate monitor is still present.

Like the Series 2, the display is made of what Apple calls ‘Ion-X strengthened glass’. I’ve accidentally bashed last year’s aluminium model on every imaginable surface, and put it through various workouts and swims, and it remains blemish-free. I’m confident this year’s model will live up to the same rigours.

As with previous models, there’s a dizzying array of Apple Watch 3 versions available for every taste and budget. The LTE model is available in both 38mm (£399/$329) and 42mm (£429/$429) size options, and these come in Silver, Space Grey or Gold aluminium finishes. Then there are the more premium stainless steel finishes starting from £599/$599 for the 38mm model. Watch Edition models are now available in either white or grey ceramic, with prices starting at £1,299/$1,299. Top these all off with returning collaborations with Hermés and Nike, and the number of options remain plentiful. This doesn’t include the range of different bundled strap options at time of purchase, which also impacts the price. The good news is that you’re able to swap out the straps at a later date. I was provided a Burnt Orange Woven Nylon strap for review too, which added a bit more pizzazz compared to the more subdued grey silicone strap I typically wore for exercise and swimming. The standard Sport band bundle includes two different-sized straps in the box.

I also tried on the Sport Loop, one of the new straps introduced with the Apple Watch Series 3 (but compatible across all models). It’s made from a slightly elastic fabric and uses a hook and loop fixing, similar to the premium Milanese loop, to secure around your wrist. Since it’s slightly stretchy, I found it super-comfortable and great if you want to quickly adjust the tightness depending on the situation – you’ll want a snugger fit during exercise for more accurate heart rate tracking, for instance. 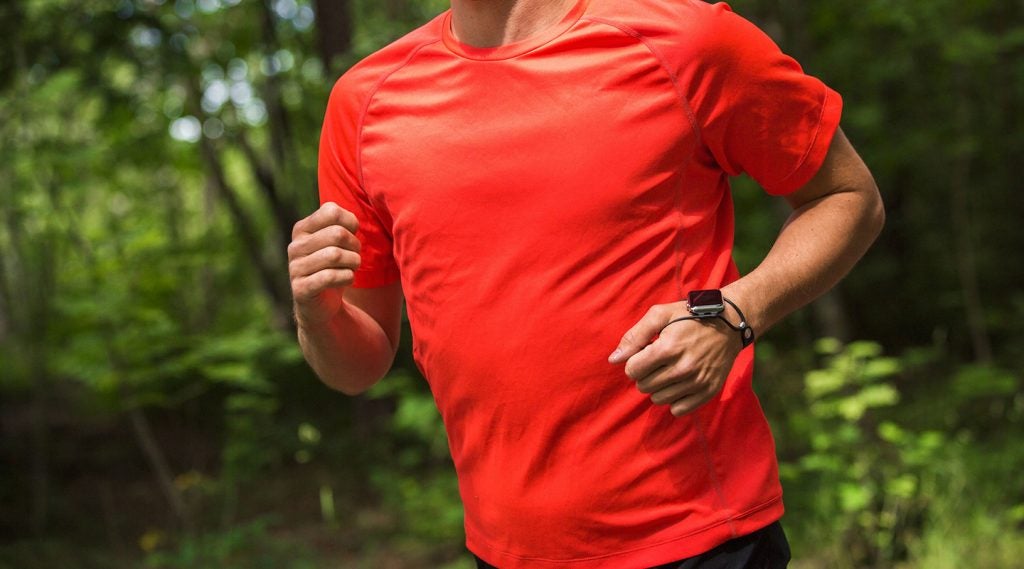 For avid runners, there’s the EdgeGear Shift, which I’ve also been using for longer runs. Rather than having the Apple Watch on your wrist, it actually moves it to the back of your hand, just below your thumb. It’s unorthodox but it makes for a much more natural way to quickly view the display without having to rotate your wrist.

All models of the Apple Watch 3 remain water-resistant to 50m and will happily survive a dunk in salt water, too. The new model uses the same charming water-ejection method as the Series 2, where it will play a specific tone to eject water from the speaker.