What is the Fitbit Ionic?

The resulting flagship wearable is best described as Fitbit’s first true smartwatch – although, arguably, the company had dipped its toes in the water with the Fitbit Blaze, even if it had carefully navigated around explicitly calling it a ‘smartwatch’.

The Ionic is an amalgam of Fitbit’s recent devices, including the Surge, Blaze and Charge 2, making it the ultimate Fitbit for those wanting more advanced sports tracking.

Unfortunately, smartwatch functionality is half-baked, much like the early days of Pebble’s smartwatches. At launch, the Fitbit Ionic lacks compelling apps and many of the conveniences available on other smartwatches.

Things look a little brighter down the line at least; Fitbit has said that support for the Deezer streaming music service is coming in 2018 where previously only Pandora music streaming was available and only in the US. Deezer subscribers will be able to sync your personalised playlists as well as Flow playlists.

Given time, I’ve no doubt things will change further – Fitbit only opened its SDK to developers shortly before launch – but right now there’s a lot of unfulfilled potential. If there’s one redeeming factor, it’s the four-day battery life, which puts all other smartwatches firmly in the shade.

In the world of predominantly circular smartwatches, the Apple Watch and now Fitbit Ionic stand out by offering square designs. Fitbit would argue that circular faces hark back to analogue timepieces stuck in the past – and from a user-experience standpoint, I don’t disagree.

Evenso, the Fitbit Ionic’s design remains divisive, especially against the now-established Apple Watch design that’s in its third generation. Some folk I’ve spoken to have been incredibly put off by the Ionic, while I like its retro charm. It’s a smartwatch that looks far better in the flesh than in pics, with many detractors softening on seeing it. 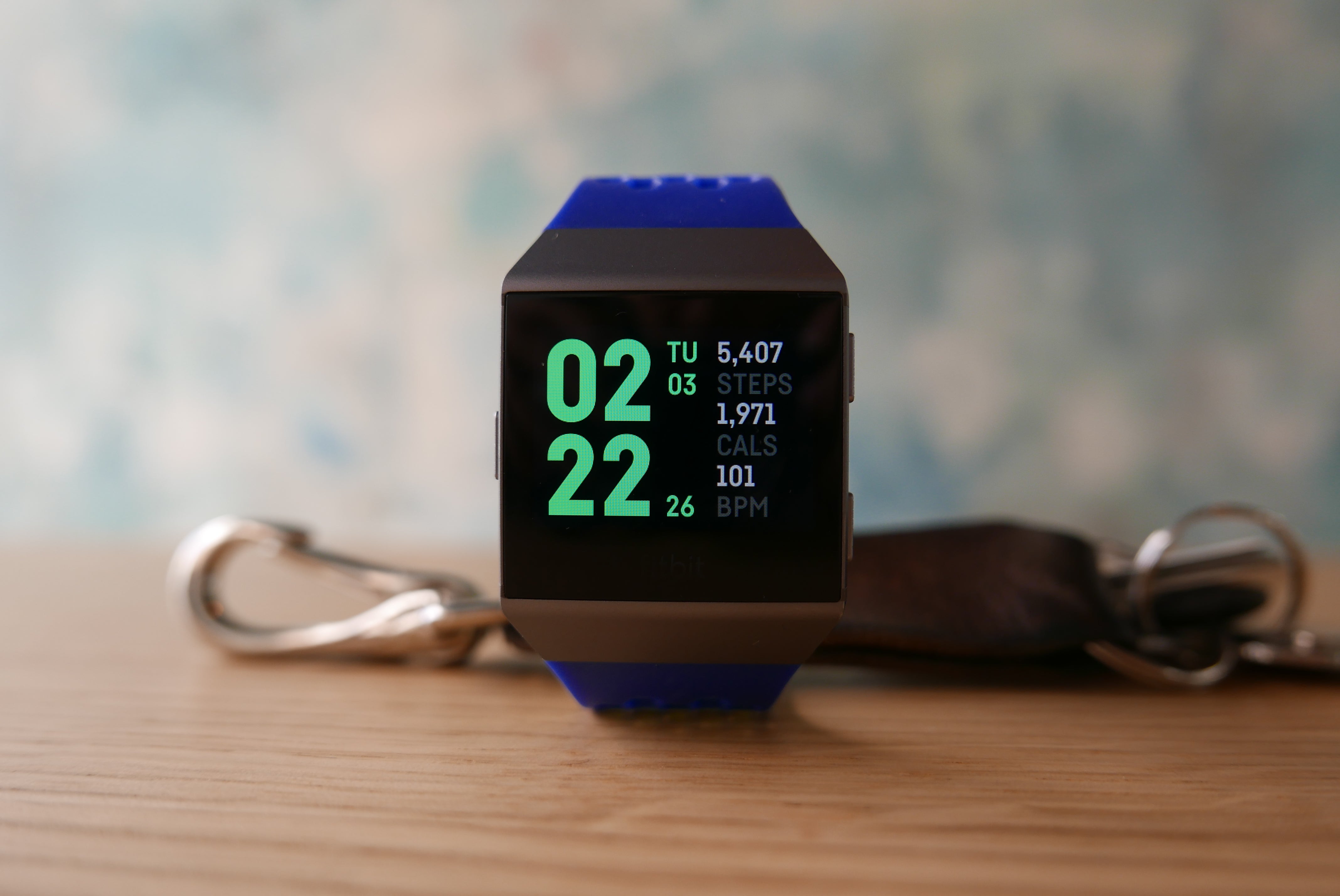 Importantly, the Ionic is light. Far lighter than its design might lead you to expect. It’s a comfortable wearable, even when on your wrist in bed or during exercise. The slightly tapered sides result in less of the Ionic being in constant contact with your wrist, and the fact that it angles away means it tends to bash against your wrist bone far less often, too.

This may not sound like a huge deal, but worn for a longer run it feels more comfortable than an Apple Watch, which I’ve found can rub and knock around after a while. 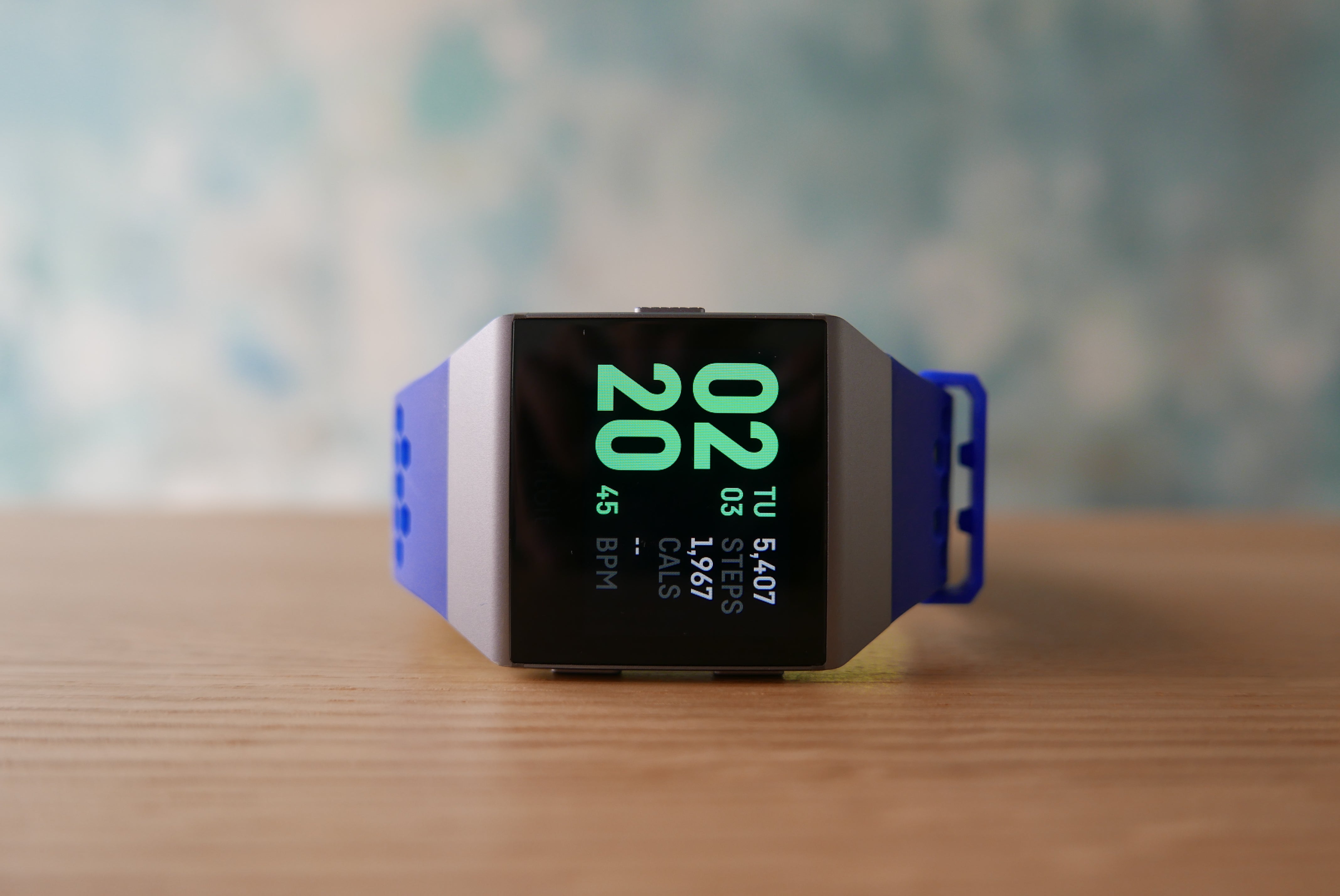 At launch, the Ionic will be available in three colours. My favourite is the Burnt Orange/Slate Blue model I’d seen at IFA, but the Charcoal/Smoke Grey unit sent in for review is more subtle and easier to dress up or down, depending on the occasion. I prefer the pairing with the optional blue sports band I was sent, which more openly embraces a sporty design.

Overall, however, the Ionic is still far from elegant, appearing boxy and clunky next to the refinement of the Apple Watch’s rounded corners and clean lines. The more I look at its silver casing and thick black bezel, the more it resembles a miniaturised CRT TV strapped to my wrist. 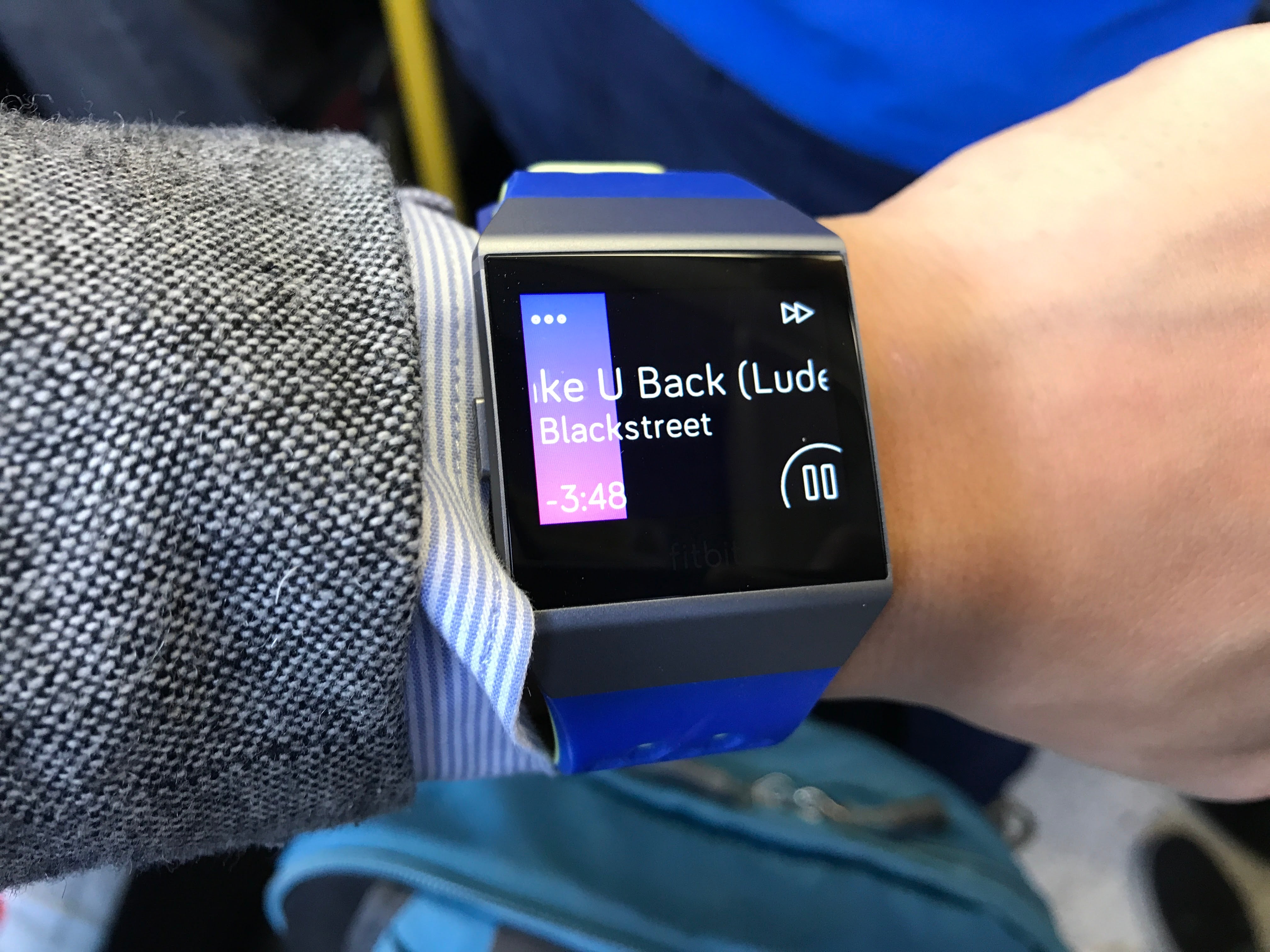 But if there’s one thing that’s far removed from a CRT TV of old, it’s the actual display itself. It’s one of the sharpest and brightest I’ve seen from a smartwatch. It has a top brightness of 1000 nits, which is as bright as an HDR TV – and matches the past two Apple Watch models.

Even under the toughest of bright outdoor conditions, it isn’t a screen you’ll struggle to read, offering sensible auto-brightness adjustments. Colours are punchy and vibrant, and really show off some of the new visual flourishes in the Fitbit OS. It’s sharp, too, with a 348 x 250 resolution across its 1.42-inch screen. 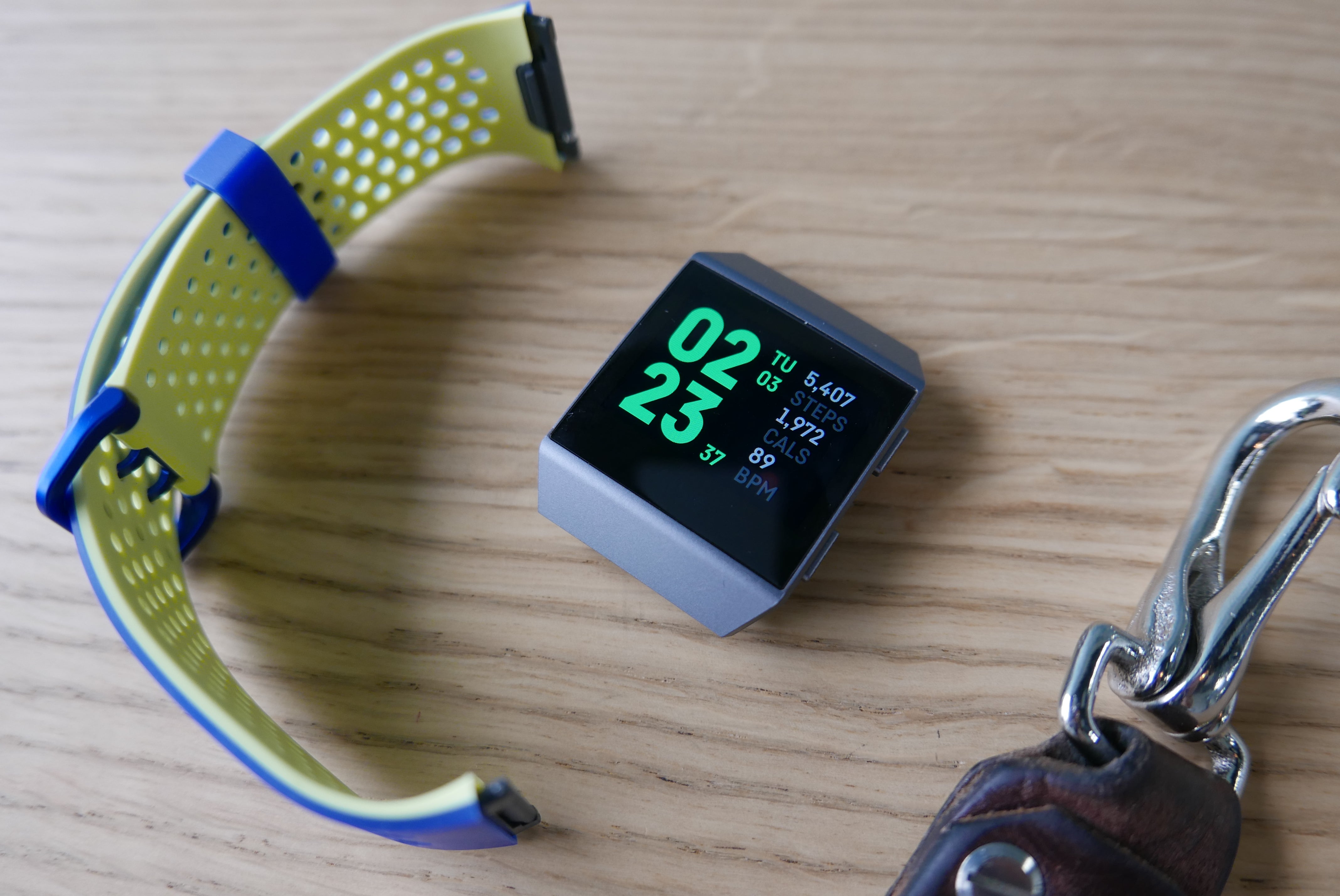 The Ionic supports a quick-release feature that let you swap out the straps with ease; there are two different-sized silicone straps in the box. Unfortunately, there appear to be some quality control issues with these straps.

I’ve tested two different Fitbit Ionic devices – one of which was running unfinished software; the hardware was final, however – and twice I’ve had straps that simply failed to lock into place as they should. Notably, there was no audible click to indicate the straps had been secured.This issue has been apparent at a few product demonstrations I’ve attended, too.

Like the Fitbit Flex 2, the Fitbit Ionic is the second Fitbit model to offer water-resistance to 50m, which is fantastic. Even if you’re not a swimmer, not having to worry about getting the watch wet in the shower is a convenience you’ll quickly learn to appreciate. The waterproofing is helped by the Ionic’s unibody design, which keeps H2O out.

While trackers such as the Charge 2 and Blaze require connected GPS from your paired smartphone for location, the Ionic offers a phone-free experience. The Ionic has GPS built in, much like the Surge. It offers one better in the form of support for GLONASS as well.

It also features a new Relative SPO2 sensor, which can detect your blood oxygen levels. Fitbit hasn’t announced an actual use for this just yet, but possible applications could be for medical conditions such as sleep apnoea – potentially taking sleep tracking to the next level.

A fan of listening to music while you exercise? Then you’ll be pleased to learn that the Ionic offers around 2.5GB for storing music, another reason to leave that phone at home. Bluetooth pairing for wireless headphones is available too. 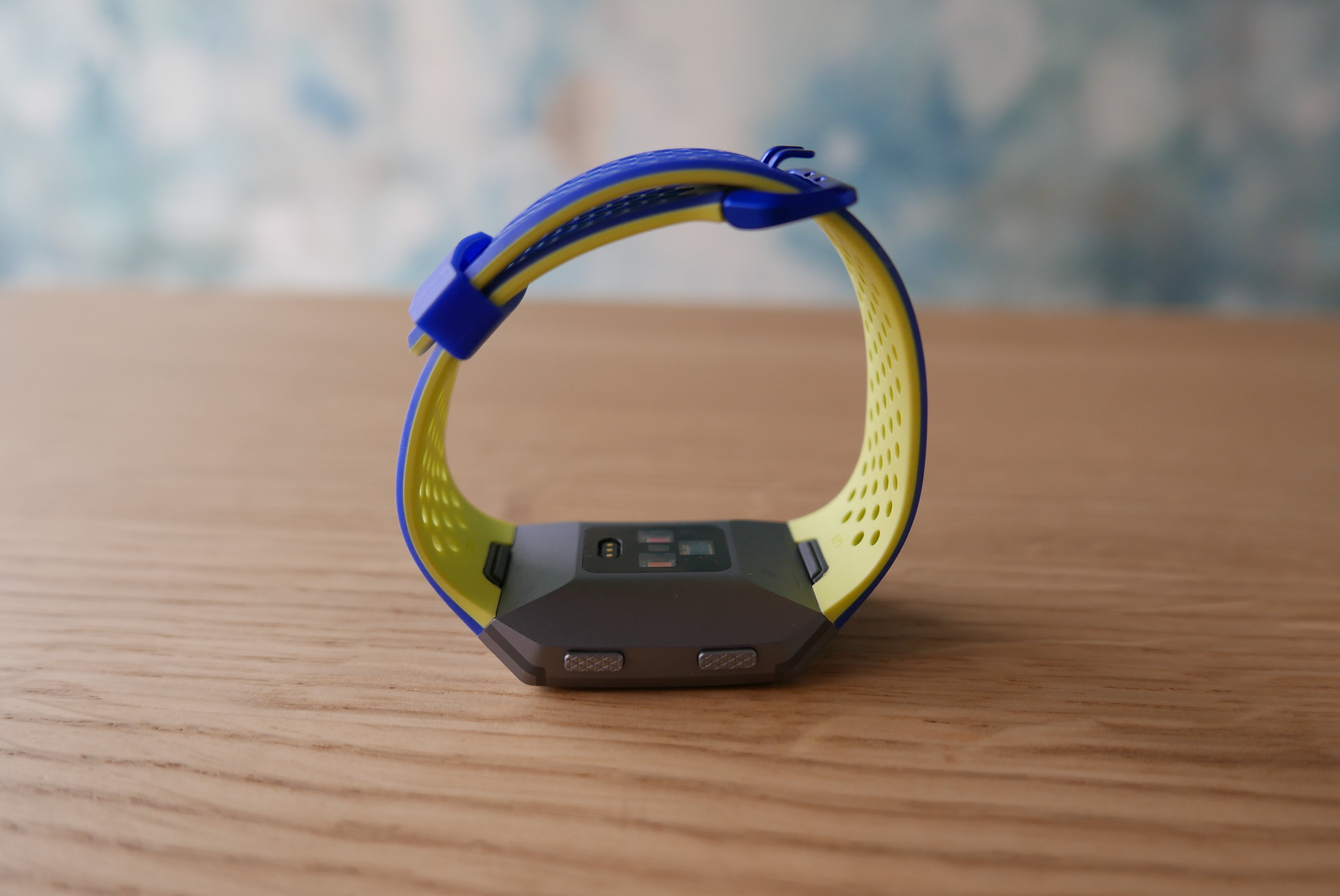 The inclusion of NFC further bolsters your phone-free experience. You can use the new Fitbit Pay service for contactless payments, much like Apple Pay on the Apple Watch – handy, if you find yourself out on a run and needing to make an emergency purchase. To access the functionality, simply hold down the left physical button to bring up the payment screen.

At time of review, the Fitbit Pay functionality wasn’t available, however. Fitbit said it would be available in the UK within the next month, and Fitbit was true to its word. That is, with a rather large caveat. Three weeks on and while Fitbit has indeed launched in the UK, it’s only supported by one bank. And if your mind is going to one of the UK’s big high street banks like Barclays, Natwest or Santander, you’re going to be left disappointed. Fitbit Pay is currently only supported by start-up bank Starling, which is a mobile only bank.

It’s all a far cry from the number of banks supporting Apple Pay or Android Pay. In fairness, Fitbit has said it’s in talks with other leading UK banks but why these agreements weren’t reach earlier is anyone’s guess.

On the underside of the device you’ll find the Fitbit PurePulse heart rate monitor, but it now sits completely flush with the rear of the Ionic’s body, rather than extending slightly as it did on previous trackers. This slight tweak should supposedly help with heart rate readings. Inside you’ll find the usual accelerometers, gyroscopes and altimeters used for Fitbit’s all-day activity tracking.

Next
Exercise and Activity Tracking Review