What is the Polar OH1?

While the Polar OH1 doesn’t quite match a chest strap, this optical HRM is worn on the lower- or upper-arm. As such, it’s far less susceptible to movement during vigorous exercise, all the while being more comfortable and convenient. It’s a great compromise if you don’t need absolute accuracy and responsiveness during intense exercise such as interval training.

The problem with wrist-based optical heart rate monitors, the kind you find on most smartwatches or fitness trackers, is that they’re prone to moving around, especially during exercise. An optical HRM requires contact with your skin in order to take its readings through optical light, so if it’s constantly sliding up and down your wrist during movement such as running – or being pushed around by exercise that requires flexion at the wrist – that’s going to impact its ability to take accurate readings. 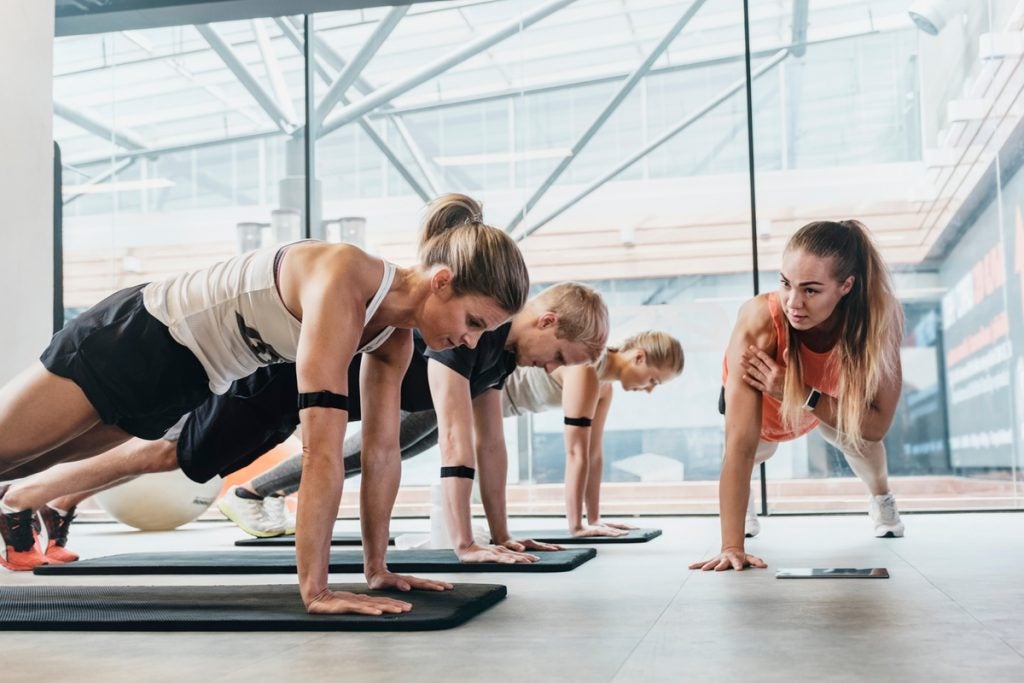 The Polar OH1 gets round this by being worn higher up your arm, either around your forearm or on your upper arm, near your bicep. The small sensor is held in place by an adjustable elastic strap, which ensures it stays planted against your arm’s skin to take constant readings.

The fact that it’s worn higher up your arm also makes it perfect for use in exercise that requires wrist wraps or gloves; where in the past you might have had to rely on a chest strap instead.  There are six LEDs to take heart rate readings.

Personally, I’ve found  chest straps inconvenient and, at times, uncomfortable. I much prefer being able to simply pull the OH1 up and around my arm. It didn’t at all get in the way, nor did it become a distraction during exercise.

The Polar OH1 connects through Bluetooth, allowing you to pair it with your smartphone to either be used in Polar’s own Polar Beat app or any number of other exercise apps. This means you can use it with Strava or other running apps to provide heart rate data. 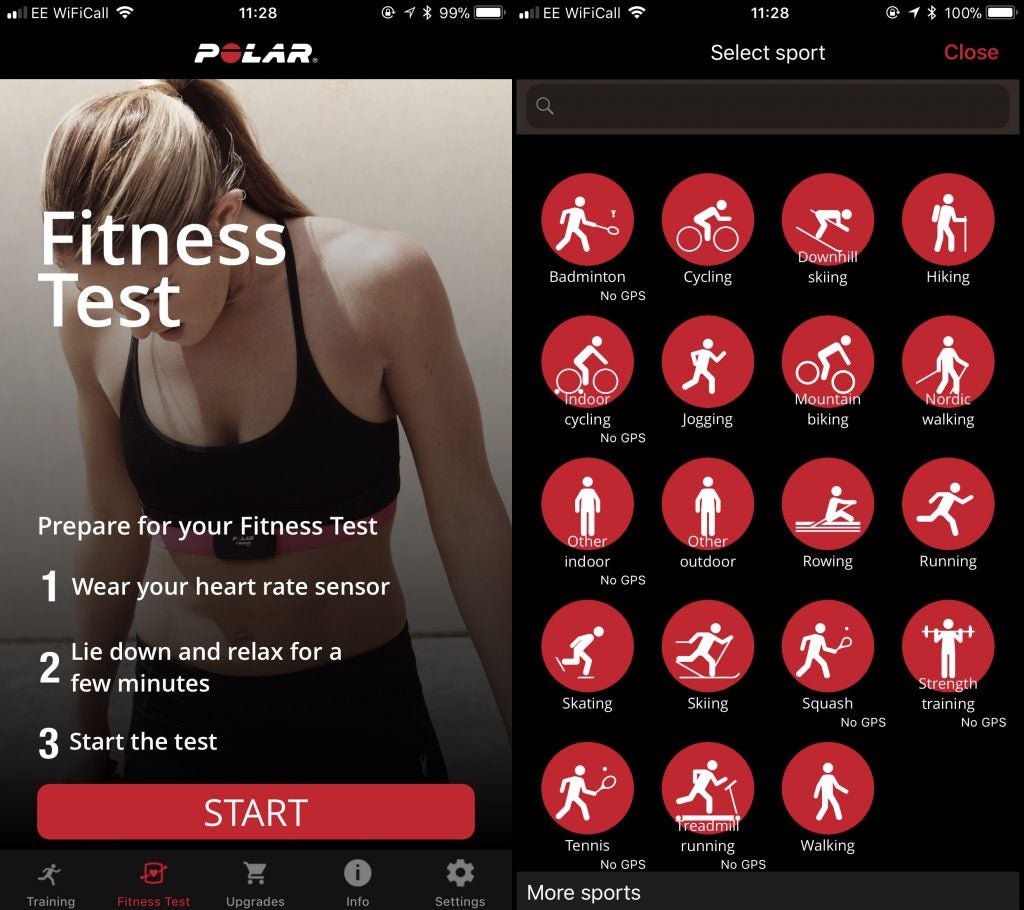 The Polar Beat app provides some useful functionality, with lots of sports and workouts you can record. If applicable, the app will use the GPS functionality of your phone to map routes and pace, alongside the heart rate data from the OH1. There’s also voice guidance and goals-based workouts.

One frustration, however, is that many of the fitness tests and extra features are locked behind a pay wall, which feels a little miserly. Unlocking them all costs only about £7, but I still feel like these should have come bundled with the OH1.

The Polar OH1 will also pair with wearables such as the Apple Watch Series 3 over Bluetooth – which might sound like a strange choice considering the Apple Watch has its own HRM. But, as I mentioned earlier, wearing a fitness tracker on your wrist can be a problem if, like me, you wear wrist wraps in the gym.

In the past, this meant I’d wear the Apple Watch higher up my forearm to leave space for my wraps, but this impacts the heart rate readings. So during testing, I placed the Polar OH1 on my upper arm, the Apple Watch a little higher up my wrist, and then the wrist wraps as usual. It’s undoubtedly a rather cumbersome look, but it did allow me to get heart rate readings during my powerlifting sessions – which proved a surprisingly effective test of the OH1’s abilities.

Note that the OH1 supports Bluetooth but not ANT+, so it won’t pair with wearables that support only the latter – many of Garmin’s running watches, for example. The Polar OH1 can also store 200 hours of heart rate data directly, so you can have a workout without a paired device and still sync your heart rate data afterwards.

I wore the OH1 for a multitude of workouts, including runs, powerlifting, olympic lifting and some boxing bag work, using various pairing configurations: with Strava, with Polar Beat and with the Apple Watch’s Workout app. Across the various exercises, I found readings were consistently accurate and compared well with a chest strap.

For consistency, it really helps that the OH1 isn’t prone to moving around. This is especially true in more explosive exercises such as sprinting or olympic lifting, which always cause wrist wearables to jump around your wrist.

It turns out that heavy squats or deadlifts are also a great way to test the refresh rate of a heart rate sensor. In the past, I assumed HIIT sprints would be the quickest way to elevate your heart rate, but even a burst of acceleration still takes a good 5-10 seconds to get your heart rate up. A heavy one rep maximum squat can get you there in less than five seconds. While it doesn’t elevate your heart rate as high as an all-out sprint, it can take you up to 80-85% very rapidly.

In this regard, I was happy to see the heart rate reading from the Polar OH1 quickly refresh to reflect this effort. The Garmin Vivosport I also had on my wrist took several seconds to take note of that increased effort.

In the end, I’ve also begun using the OH1 to record my recovery periods in between sets, letting my heart rate tell me when I’m ready to go again, rather than just playing it by ear. The OH1 isn’t going to be a direct replacement for an ECG-based chest strap, but it isn’t far off – and is certainly a great compromise for anyone but professional athletes. Its strength really lies in its versatility and application across different sports. 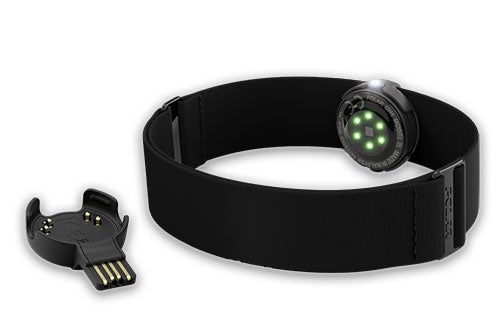 You can expect about 12 hours of battery life from a single charge, which should get you through a week or two of workouts. Charging requires you to pop the sensor out of its holder and into a USB charging dock. The 12-hour measurement seemed about right based on my usage.

Why buy the Polar OH1?

If you’re not a fan of chest straps and feel under-served by optical HRMs for your wrist, the Polar OH1 is an excellent middle-ground. The form factor is far more convenient and comfortable, and the accuracy is markedly improved over what you’ll see from a wrist-worn device.

At £70, the Polar OH1 is a little expensive, especially as you might want to then pay for the in-app purchases in the optional Polar Beat app. Otherwise, the Polar OH1 is an excellent heart rate monitor that applies itself well to a range of sports and workouts. If you’re after a chest-based HRM, consider the Wahoo Fitness Tickr X.