The VIRB 360 is the latest action camera from Garmin, and the first surprise is that it shoots video for VR. The second surprise is that this could be the best consumer-grade 360 video camera currently on the market. Most people know Garmin for its sat navs and sports-tracking products but the company entered the action camera market a couple of years ago with the VIRB range. Now it has beaten GoPro by as much as six months with a 360-degree action camera of its own.

The VIRB 360 comes in a deceptively small box, considering how much is packed inside. Alongside the camera itself, there are two different mounting options, plus a mini tripod and a hand grip, although the latter are cleverly combined. The mounting options clip onto the bottom of the camera and provide either a standard connection for VIRB / GoPro accessories or a tripod screw mount. 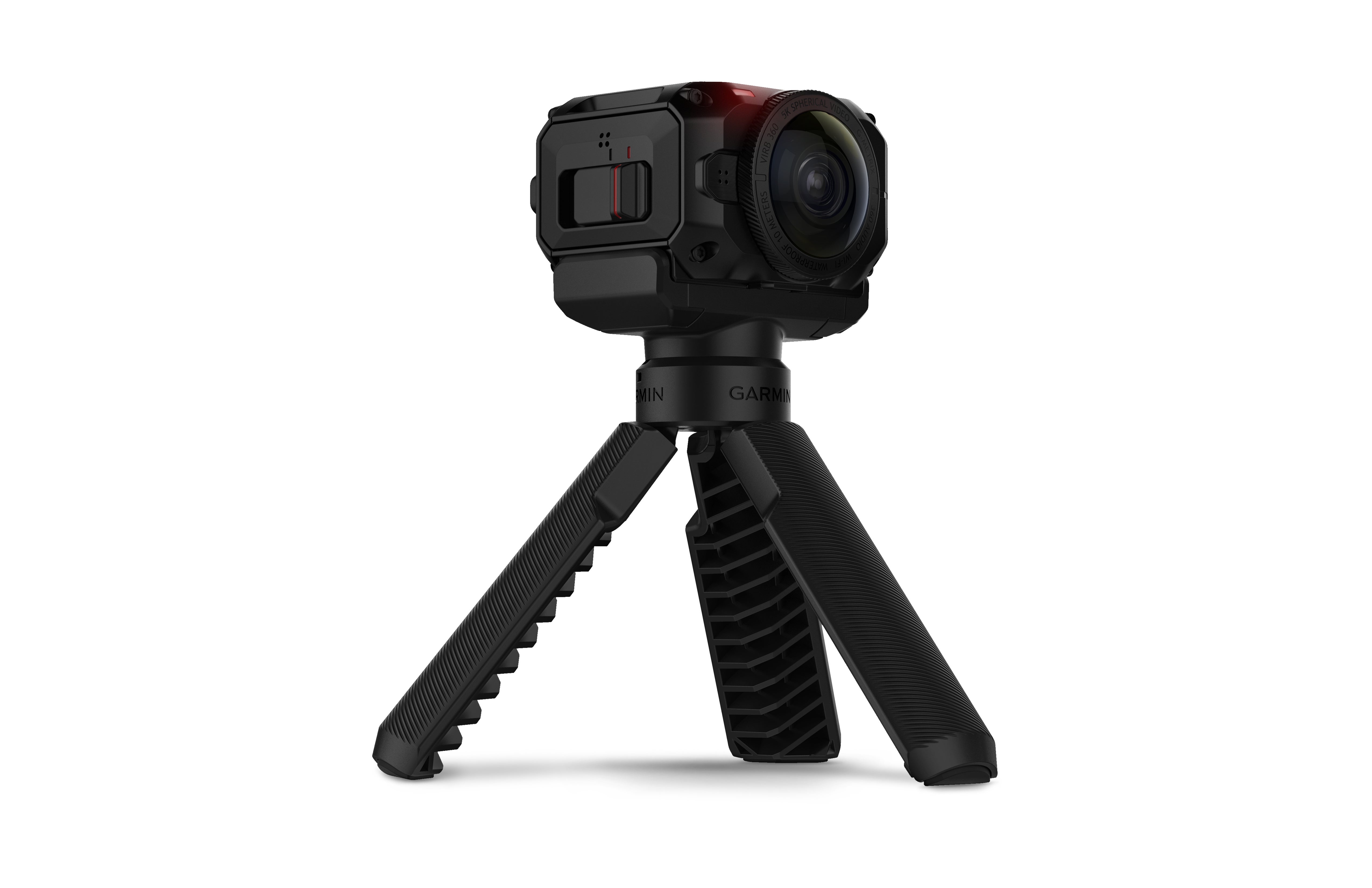 The latter is used with the tripod hand grip combo. The legs fold together to make the hand grip, or open out to create the tripod. It’s a neat system adopted by other 360 cameras such as the Samsung Gear 360 and DokiCam, and makes the VIRB 360 very versatile. You can hold the camera up above your head to grab panoramic action on the move, or place it on the table or floor to capture events as they go on around it.

Like the Ricoh Theta S, and most other consumer-grade 360 cameras, the VIRB 360 relies on two sensors facing away from each other, equipped with extreme fisheye lenses. The feature that lifts the VIRB 360 above the competition, and potentially GoPro’s alternative when it arrives, is the resolution it shoots at. 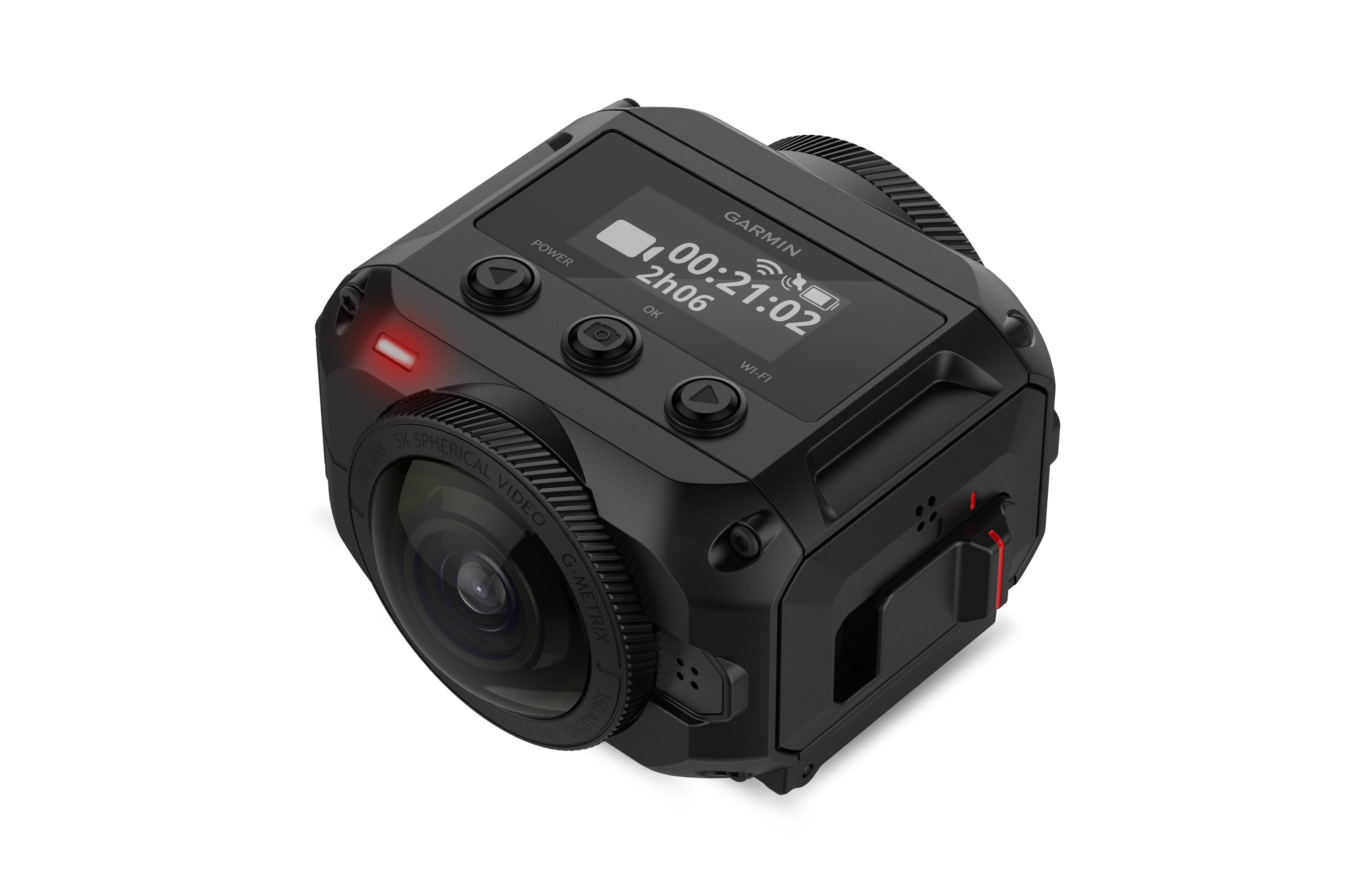 The two sensors are large 1/2.3-inch backside-illuminated CMOS chips, with 201.8-degree field-of-view lenses each. This means that what they pick up overlaps, so the camera can capture a complete sphere of what is going on around it. Each sensor boasts a significant 12-megapixels, and unlike most current 360 cameras, the VIRB 360 can output a pre-stitched “equirectangular” video file, ready to be uploaded straight to 360-aware online video services like YouTube or Facebook without the need for any user editing. There’s a host of great action camera features on offer, too. The housing is waterproof to 10m, and the battery (which lasts about an hour for 4K video recording) is removable so you can carry spares to extend recording time. The VIRB 360 can also be paired with a host of Garmin’s sports-related sensors and data collected alongside the video recording.

When you get the VIRB 360 out of its box, it’s set to recording 4K with internal stitching, which is the most convenient. There is a small LCD panel on the top that provides access to a selection of functions, such as switching video to timelapse, or changing between 360 and regular camcorder usage using just the front or rear lens. You can also switch to RAW mode, which means the video won’t be stitched internally. 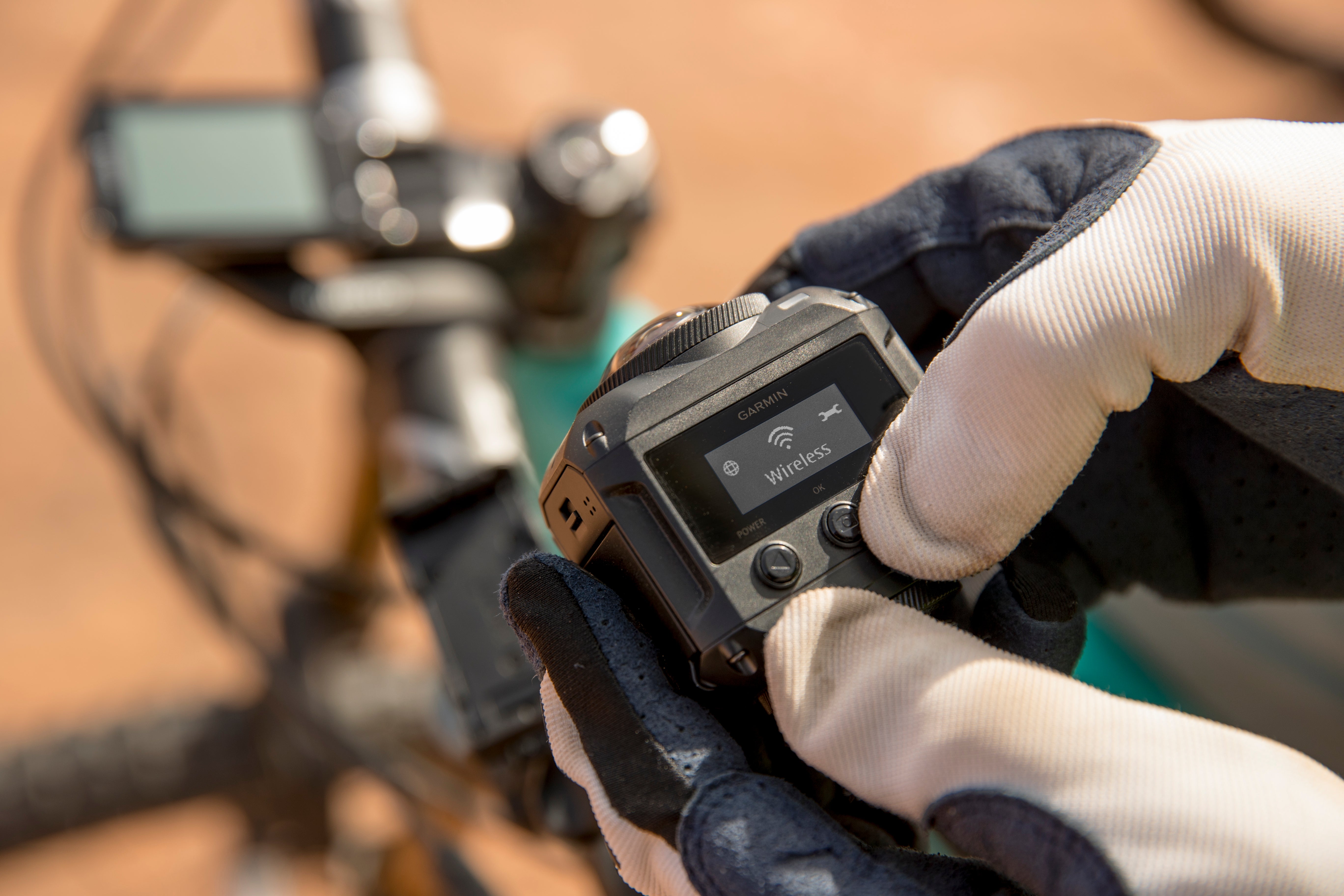 However, if you want to change settings in more detail you will need a smartphone (iOS or Android) and the VIRB app. As with other smartphone control apps for action cameras, first you turn on the VIRB 360’s WiFi, then connect to it via the smartphone, then the app will provide a video preview plus the ability to change settings, including video recording resolution.

However, there’s another trick available, and that’s live streaming in 360. When I tried this with Facebook it said “360 Video is not yet available for this device”, but YouTube worked incredibly well, even over 4G. The resolution is 720p, so not the full 4K, but this is still a great facility – if your smartphone’s data package can handle it. Another piece of software that Garmin makes available for the VIRB 360 (and its other VIRBs) is VIRB Edit. This can be downloaded from Garmin’s website but is hard to find without first registering your device via the Garmin Express firmware updating software.

VIRB Edit isn’t really about putting together the next Hollywood blockbuster, although you can trim clips, splice them together with transitions, and add titles. It’s more about accessing the additional features that VIRB action cameras have over their competitors – the GPS and accelerometer information, which Garmin calls G-Metrix. You can overlay this information on top of the video, using various preset visual configurations. This was a key benefit for previous Garmin action cameras such as the VIRB Ultra 30. 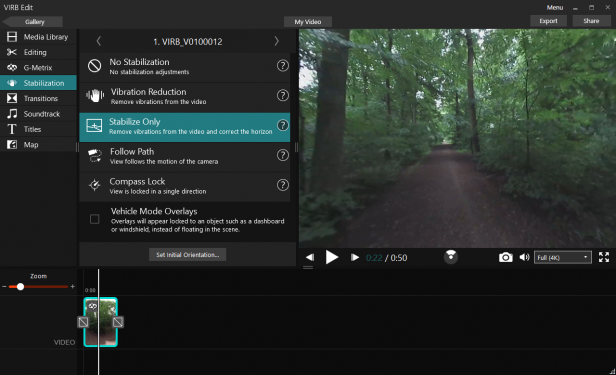 The latest version of VIRB Edit adds specific features for the 360, too, including the ability to decide where in the spherical view the video starts, or you can make the view follow camera motion or a specific compass direction. Most impressively, there is the option to stabilise footage so that it’s not as jerky if recorded whilst you walk along, ride or ski. I found this feature to be pretty effective, although there was a slight quality reduction evident compared to the raw footage.

To deal with the 5K or 5.7K RAW footage (which is still stored in MP4 files), you need third-party software at the moment, although VIRB Edit will build this into a future version, according to Garmin. I tried VideoStitch Studio and Kolor Autopano Video 2.6. The former crashed when VIRB RAW video was imported (on two completely different systems) and the latter was far from a one-click option.

Although the VIRB 360’s lens is rated as a 6mm 35mm-equivalent fisheye, I found that setting the lens at 9.6mm in Autopano Video seemed to achieve the most (literally) seamless results. It’s likely that presets will soon emerge for the VIRB 360, making this process much easier, and Garmin will be building support into its own Edit software. But at the moment the 5.7K resolution is a feature you can’t really use with ease, unless you’re a 360 expert.

Still, even the 4K footage is a cut above any other 360 camera I’ve seen so far, and it’s extremely handy that it’s already in the “equirectangular” format recognised by YouTube, so you can simply drag and drop the footage into the site and it will be displayed with controls to pan around the scene once processed. The detail still isn’t up with a Full HD non-360 frame, but it’s getting closer, and crosses the boundary between gimmick and serious 360 video making tool.

Here is a clip with stabilisation applied via Garmin VIRB Edit.

This clip was live streamed to YouTube over 4G.

This is a 360 image sample. This another sample taken in conditions where the wind was blowing sand around a lot. Annoyingly, to get the 360player site to recognise the images as 360, it was necessary to resize them by two pixels higher so that they were exactly 2:1 aspect ratio. All images were originally 5,640 x 2,816, but had to be resized to 5,640 x 2,820 for upload.

The Garmin VIRB 360 has certainly stolen a march on GoPro, with the latter’s Fusion not yet available and only stretching to 5.2K. The VIRB 360 also has advantages over other competing 4K-capable 360-degree cameras in terms of ease of use. In reality, most people buying now will only use the pre-stitched 4K output for the time being but this is still overall the best 360 action camera currently on the market.

The best consumer 360-degree action camera currently on the market