The DokiCam is a self-contained VR-friendly camera capable of capturing in full 360-degrees through a pair of dual-lenses with a 200-degree field of view each. It’s able to capture 3K video (2880 x 1440 resolution), which isn’t quite as high as some rivals, with 360-degree still image capture up to 4K (4896 x 2448 resolution). The resulting video and images are ready to be shared on YouTube or Facebook without the need for any user processing.

One advantage it has over many other 360-degree cameras is dust and water-resistance, although at IP54 this does only mean splashproof without its optional waterproof case. Still, its relatively travel-friendly size and integrated tripod make it a respectable 360-degree camera – even if its video capture quality is a little disappointing. 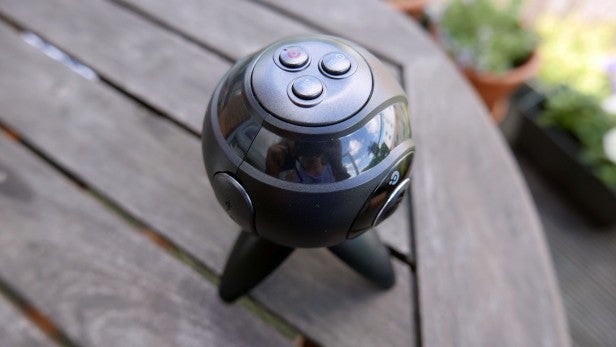 Contrary to the squared-off design of the Nikon KeyMission 360, the DokiCam’s main body is completely spherical and about twice the sized of a golf ball. It looks a lot like the previous generation Samsung Gear 360.

Its shape and size aren’t exactly pocket-friendly but it’ll happily go into a bag, all the while having some degree of protection from its accompanying felt travel pouch.

Tucked away behind secure covers along the sides are the Micro USB charging point and microSD slot, and on the opposite side there’s a Micro HDMI output for an external display.

At 140g it’s not particularly heavy, and a standard tripod thread on its base is designed to let you mount or place the camera in a number of different ways. Only a small set of tripod legs are included in the box, but with these folded down it makes for a decent hand grip. 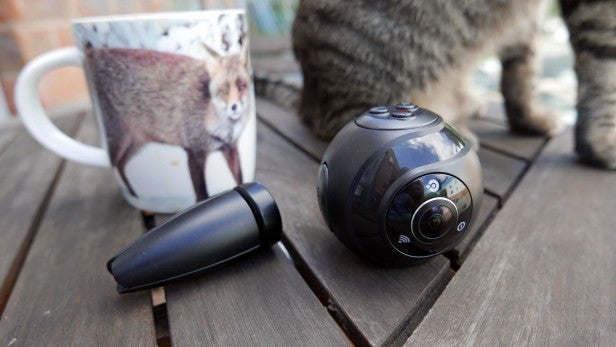 You could feasibly pick up any number of action camera mounts that have a standard tripod thread if you want to use the DokiCam in more elaborate ways. During testing I paired it with a GorillaPod on a number of occasions to let me dangle or attach the camera to fixings.

All of the DokiCam’s controls are located on the top, of which there’s a power button that also toggles between photo and video, a Wi-Fi button for connecting your smartphone, and a shutter button for beginning capture.

On the front, if you can consider there being a front to a sphere, there are three corresponding LEDs that let you know what mode the DokiCam is in, whether it’s recording or the Wi-Fi status. The only problem is these LEDs are really difficult to see in bright sunlight. You also get a beep but it’s so quiet you can barely hear it in a silent room. There’s no option to change the loudness, either. 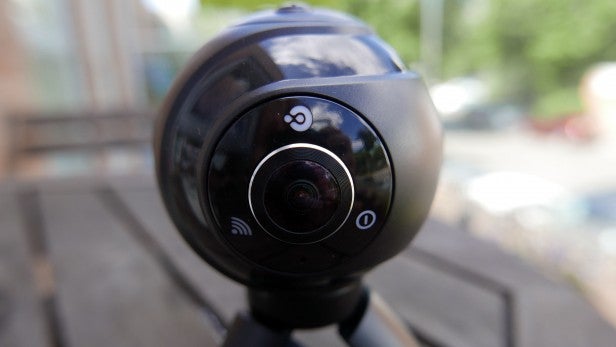 Instead, it’s better and more reliable to pair up your smartphone and use the companion iOS or Android app. This just requires you to connect directly to the DokiCam through Wi-Fi. You’ll need to use the app to change any settings beyond toggling between video and still images. Then, you can access other modes such as timelapse or cyclic still images. One annoying thing I discovered is that if you begin a recording through the app, you can’t then stop it at the end by hitting the shutter button on the camera. You have to return to the app or power down the camera, which seems odd.

Otherwise, the app is well designed and provides a useful live view of the camera’s sensors with only minimal delay. You’re then able to view the sensor through a number of modes including fisheye, panoramic, planet and VR. The latter requires you to use a VR headset such as a Google Cardboard. Otherwise you can pan around in 360-degrees by swiping across your screen. 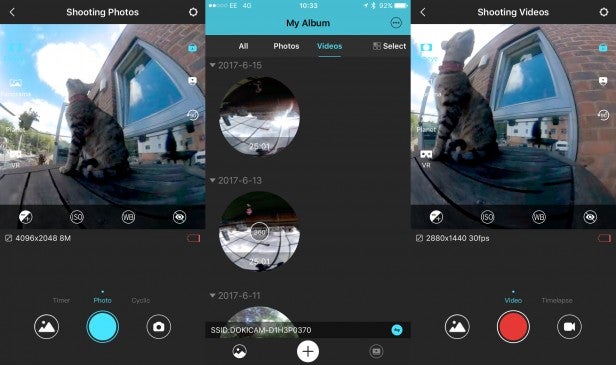 You’ve also got control over camera settings including exposure compensation, ISO and white balance, giving you some tweaking abilities.

Transferring video from the DokiCam to your phone can be a little slow. The camera will cut up longer videos into 30 minute clips of 2.6GB in size, and transferring one of these will take just over 10 minutes. But then when you opt to then share it with a separate app like Facebook, the app processes the video, which can take another 10-15 minutes. It means the whole sharing process can be rather laborious.

There’s also DokiCamPlayer desktop software available to download for Mac OS or Windows, which is just a basic player that stitches together the two views into a 360-degree video. You can also use it to export 360-compatible video for YouTube. A 341MB non-stitched video resulted in a 2.33GB final video.