That’s when using just a single Pixpro SP360 4K (£339), however. If you want to capture a fully-spherical 360-degree view of the world, there’s also a Dual Pro Pack (£749) option, which is the model I was sent to review. This gives you two SP360 4K cameras you can mount back to back with included accessories, providing a front and back view of the world that you can then stitch together.

The system works well and footage is very good for a 360-degree camera, but the SP360 4K Dual Pro Pack system is cumbersome to use and the accompanying software is limited. As a result, the whole system requires some patience to get an acceptable result and makes the Kodak hard to wholeheartedly recommend. 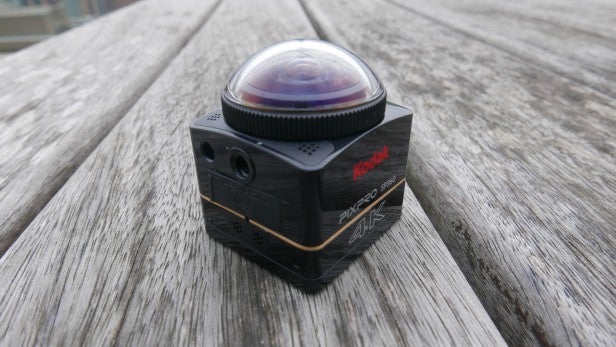 The SP360 4K camera is distinctly boxy, with sharp edges and corners to its plastic construction. As individual SP360 4K can be used with the bulbous lens pointed upwards, so the box-shaped camera body forms a base for it to sit on and you get 360-degree footage horizontally. Some of the vertical perspective is lost towards the bottom, so keep that in mind when framing. You can think of the perspective as bit like an extreme panorama.

You can also face the camera forward and change it to a ‘flat’ perspective where it operates more like a conventional camera.

Controls for the shutter and settings adjustments are located on one side, with a small LCD display on another side that you can use to navigate through the system menu. Another side hides the Micro USB, Micro HDMI ports and microSD card slot behind a rubber flap. 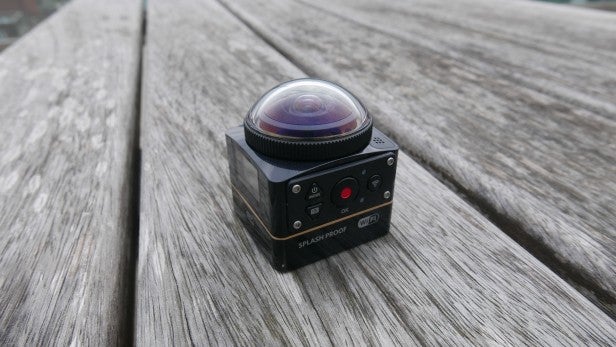 While the SP360 4K is definitely not an action camera, it is splashproof, so a little bit of rain should be fine. The body isn’t ruggedised, however, so I suspect its plastic construction will not do well with a fast-tracked meeting with the ground, even if it is rated shock-proof to two metres. The lens comes with a plastic lens cover to give it some protection, as well as a lens cap. 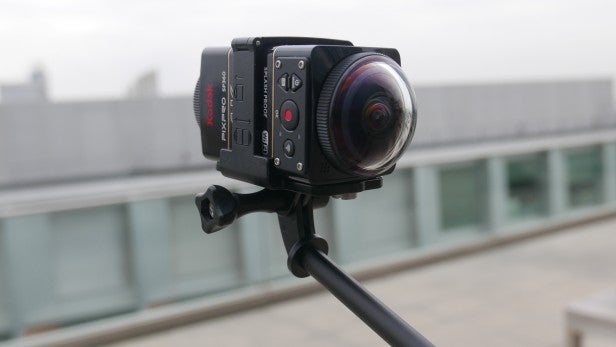 Things get more interesting when two cameras are used for fully-spherical footage. For this, Kodak includes a dual-camera plastic frame mount. You screw each camera in but doing this is more fiddly than I would like because you need to find a suitable tool like a coin, rather than simply having thumb screws. 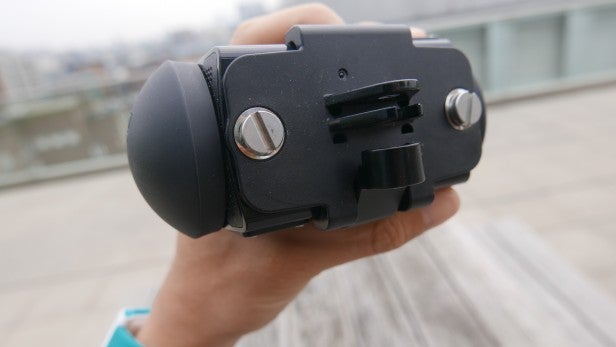 Once mounted the frame obstructs access to the ports, which means you’ll have to unmount the cameras if you want to access the microSD cards or charge them, which can be annoying especially at the end of a shoot.

The bottom of the dual-camera frame has a mounting point that resembles, at first glance, a GoPro’s. However, it’s actually slightly different due to the threaded lug nut section being on a separate part. Some of my GoPro mounts worked okay, but others wouldn’t secure themselves adequately. 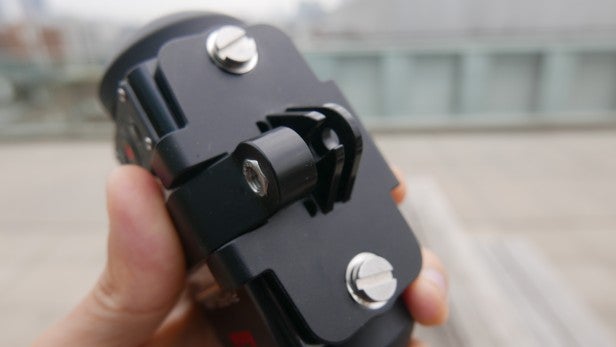 In any case, with the Dual Pro Pack option you get a telescopic selfie stick as well as a suction cup mount. Another mounting frame designed for one camera is also included in the pack. Other accessories include a wrist strap remote you can use to control up to five cameras simultaneously, and a small clip if you want to attach the remote directly to the selfie stick.

The remote control uses watch batteries and mine managed to die during the course of testing. I’m not sure if I left it on but I certainly didn’t use it that often. The most annoying thing is removing the rear battery cover, which requires a coin or something similar. I managed to strip the sides of the plastic, so now it’s incredibly difficult to remove (sorry, Kodak PR). More sturdy plastic would have been welcome. 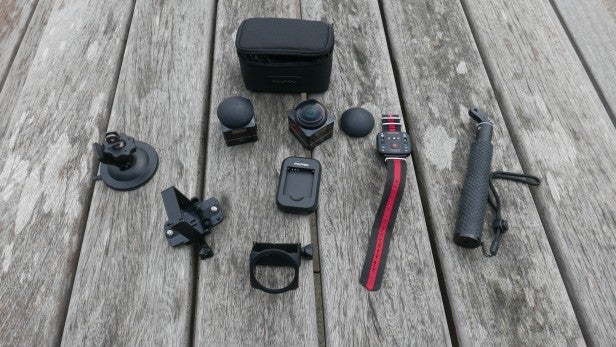 The previously mentioned side controls can be used to change settings. There’s all manner of settings that can be changed in-camera, from resolution, to perspective, to white balance, to turning the image stabilisation on or off. The only problem is that these are all represented by monochrome icons on the LCD screen, and they’re all tucked deep inside nested menus.

The instruction documentation ends up looking like a tube map but you’ll probably need to consult it to work out what setting changes what. It’s more complex than it needs to be. You’ll need to change settings especially if you’re using a dual camera setup for spherical video, too.

This is because for the best results you’ll need to disable the electrical image stabilisation on each camera, set it to 1:1 aspect ratio mode and ensure they’re both set to a manual white balance. The latter wasn’t even mentioned in the documentation. I just learned this through trial and error, and footage that didn’t quite match up due to different lighting conditions from the front and rear cameras, resulting in different automatic white balance adjustments. It’s this sort of finickiness you generally avoid with dual-camera 360 cameras that just come as one device. 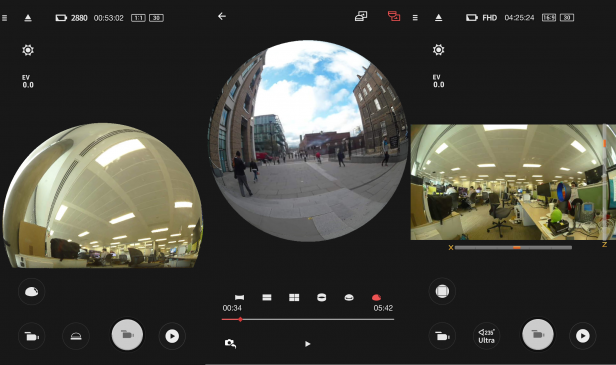 You can at least use Kodak’s Pixpro smartphone app as a remote control instead. This lets you change the settings on each camera, but there’s a big caveat. It only works with one camera at a time. So if you’re using a dual camera setup, the app’s live view only gives you half the picture and you’ll need to connect to each camera separately to change its settings. Again, probably not an issue if you’re not effectively using two separate cameras rubber-banded together.

Once you’ve got your footage, you then need to stitch it together using Kodak’s free PC or Mac software. Again, you can’t use an app to do this. So you now have to manage two separate memory cards and to manually match up the two pieces of footage you want to stitch together. Both memory cards might not have identical content if you’ve been using them separately, so hopefully you set the correct time and date on each camera, which will make life much easier.

The software is bare bones, too. You select the two pieces of footage from the two sources – it helps to have two card readers to save time and transferring – and the software tells you if they’re suitable for stitching. You can then hit an audio sync button to help sync the two videos together, so a starter clap can really help here. 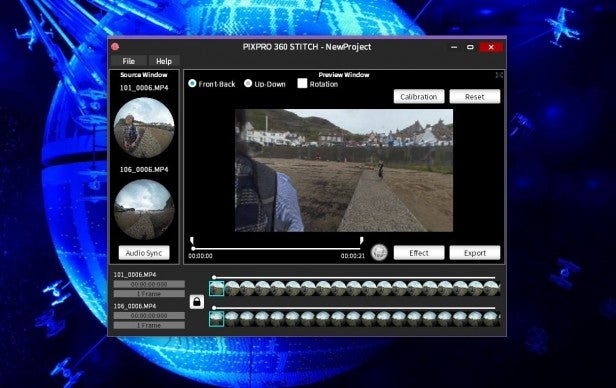 Annoyingly, the stitching isn’t perfect straight away. You’ll have to adjust individual settings such as pan, tilt or roll, to try and get things lined up. Even then, any objects close to the camera will overlap slightly and it’s a slow, tedious process. Even when you select a moment in the footage and get everything lined up as perfectly as possible, when you watch it back you’ll still find other parts of the video are askew if the camera is moving.

There’s no stitching issue when shooting with just the one camera but you lose a large area of the lower frame. Single camera footage is captured at up to 3,840 x 2,160 and 30 fps when shooting in flat mode. In round mode you’re limited to  2,880 x 2,880 resolution and 30 fps.

After you’re done stitching or editing, you can have the software output the video as an .MP4 file and, happily, YouTube and Facebook will recognise these as VR-friendly videos without any user input such as messing around with meta data. Once they’re uploaded, you can pan around or jump into the VR experience to playback the video in your headset of choice.

Next
Video and sound quality, battery life and verdict Review