What is the Garmin VIRB Ultra 30?

The VIRB Ultra 30 is the new flagship action camera from Garmin. Like the VIRB XE, it uses a GoPro-like form factor. But where the XE maxed out at 1,440p resolution, the Ultra 30 finally reaches 4K.

This isn’t the only enhancement over the previous model, plus the camera retains the G-Metrix features that gave Garmin’s action cameras something unique compared to the competition. Could this be Garmin’s most competitive action camera yet, and can it dismount the GoPro Hero 5 Black?

The VIRB Ultra 30 comes with a waterproof case that will keep the action camera dry to a depth of 40m, thanks to a double-locking mechanism. There are no IP ratings quoted, but this is a commendable depth, although a little less than the 50m of the XE. It even comes with anti-fog packs to stop condensation inside.

Unlike the XE, however, the Ultra 30 isn’t permanently fixed inside its casing. Instead, like most other action cameras, the casing is removable.

This is good news if you want to use a different housing, or don’t need a robust outer casing. However, a case or caddy will be required, because the action camera itself doesn’t have any kind of mounting point built in. On the plus side, the battery is still removable, and has grown to 1,250mAh from the previous model’s 980mAh.

The larger battery means the VIRB Ultra 30 is specified to last 2hrs 15mins when shooting Full HD, a little longer than the XE. This still isn’t up to the three hours of the original VIRB, and duration drops by an hour in 4K. There’s also no way to attach external power to the Ultra 30 when it’s inside its waterproof casing, unlike the XE. 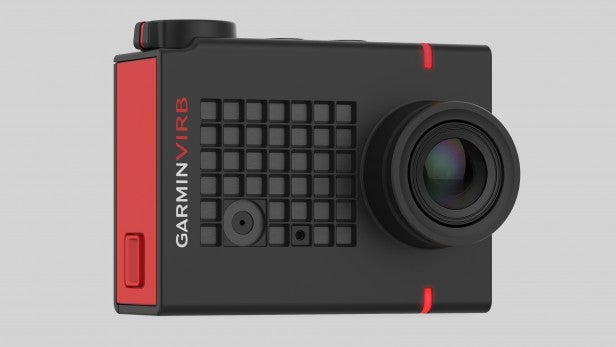 The Ultra 30 is tiny when it’s out of its housing. There are ports for micro-HDMI and micro-USB, and a mysterious trio of contacts on the bottom of the camera that are allegedly for as-yet unreleased accessories. The microphone has a special pass-through port that connects to the outer casing, potentially providing better audio than most action cameras when inside waterproof housings.

Another bit of good news is that the LCD panel returns. The menu can be operated whether or not the camera is inside its case, using two buttons on the top. But the display is also a touchscreen, so obviously this won’t function through the casing, even though it’s transparent and you can still see what’s going on. Accessing the menu functions is relatively easy using the touchscreen.

However, this isn’t the only means of control; voice activation system is available too. This is similar in function to the GoPro Hero 5 Black. Simply say “OK Garmin” and then tell the device to “Take a picture”, “Start recording”, “Stop recording” or “Remember that” (to mark a video clip as a highlight).

Garmin hasn’t improved the specifications of the sensor inside the Ultra 30 over the XE, with a similar 12-megapixel resolution and sizeable 1/2.3-inch sensor. But the signal processing sees significant enhancement. The headline act is that, finally, you can shoot in 4K with a Garmin action camera – and at the full 30 frames/sec too.

There are also some great high-speed options at lesser resolutions. You can shoot 2.7K at 60 frames/sec, 1080p at 120 frames/sec, 720p at 240 frames/sec, and 480p at 300 frames/sec. Smooth slow motion is readily available even at Full HD, too, which will be useful for action videography. These broadly match the GoPro Hero 5 Black’s most important options, although the latter has a bewildering range of resolutions in between.

The maximum data rate is 60Mbits/sec in 4K mode, although this is compressed to around 35Mbits/sec when you add the G-Metrix overlay. This is a little low for this resolution, equivalent to shooting Full HD at 8.75Mbits/sec. Footage is recorded to microSD, with the slot rather hidden next to the battery under the main unit cover. A 16GB card will hold just 35 minutes of 4K footage.

The Ultra 30, like the XE, also offers image stabilisation – but since this uses pixel-shifting on the sensor, it doesn’t work in 4K because there aren’t enough spare. It only operates at up to 1,440p at 60 frames/sec or 2.7K at 30 frames/sec. Still, it’s a three-axis system and while it’s no match for optical image stabilisation as seen in Sony’s recent FDR-X3000 Action Cam, it’s nevertheless worth having. Optical systems can also have a really hard time with extreme action.

There’s a decent selection of mountings included in the box. The waterproof case screws onto a mount, with flat and curved adhesive options included. There are also standard and vertical mount adapters, plus both short and long extension arms. 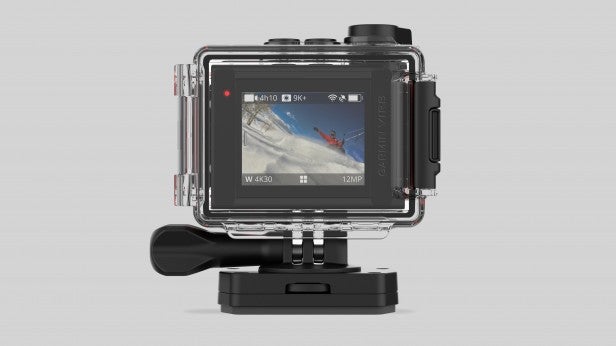 If this isn’t enough, Garmin has a healthy range of accessories available. I was sent the bike mount and a rotating ball mount. The bike mount appeared to be for the VIRB XE, but used the same components as the other kit, so I was able to connect the Ultra 30 to my bike’s handlebars. The waterproof mount is also compatible with GoPro accessories, so there will be a huge range of options both from GoPro and third parties.

Aside from the plethora of shooting resolutions, there’s a Pro mode that provides greater configuration of the settings. The Color Curve can be set to either Vivid or Flat, and white balance to auto mode or five presets between 2,800K and 7,500K. There are three levels of sharpness, and ISO limit from 100 to 800.

While there’s no direct control over shutter or iris , there’s an Exposure Bias with 13 steps between -2 and +2 EV. There’s also a spot meter that takes advantage of the LCD touchscreen to pinpoint what you want to be the reference point. Again, this mostly matches the GoPro Protune options.

One of the great features of all the VIRBs has been the ability to record extra information alongside the video, so that the details of your activity can be displayed embedded in the frame. The Ultra 30 itself has a built-in GPS, accelerometer, gyroscope, altimeter, and compass. Garmin calls this G-Metrix. This is already more than the GoPro Hero5 Black has to offer.

It should be noted here that the altimeter won’t work properly when the Ultra 30 is inside its waterproof casing, so Garmin supplies a second door that isn’t waterproof. Instead, this is merely IPX7 rated, which means it can handle a 1m depth for up to 30 minutes. A rain storm should be fine.

Beyond the built-in G-Metrix, the Ultra 30 will connect to a truly incredible range of external sensors, via ANT+ and Bluetooth. There are various heart rate monitors, bike sensors, ELM327 OBD2 car interfaces, and even aircraft as well as boat sensors. Not all of these information sources can be superimposed on the frame, but the data can be collected alongside the video. 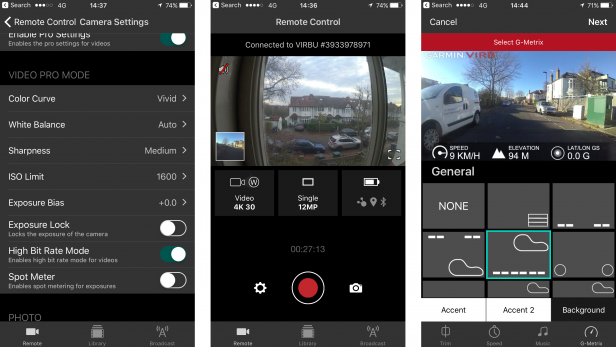 There’s Wi-Fi, too, allowing a smartphone to be used for control, employing the usual system of turning the action camera into an access point. The VIRB app then provides a full suite of configuration options and control.

You can also use your smartphone’s mobile data for YouTube streaming. Simply sign into Google and the software sets everything up for you, after which you can email a YouTube short link to your viewers. This worked very well when I tried it.

The app is also handy for viewing the G-Metrix that’s been captured alongside the video and embedding it when you share the footage. Once you’ve signed into Google, you can transfer files from the Ultra 30 to your Drive account, which is a pretty handy way of backing up video when on the move, albeit likely to pound your mobile data contract. However, 4K is reduced to 35Mbits/sec during this process.

One of our biggest criticisms of the VIRB XE was its lack of 4K. The Ultra 30 is now up with the best action cameras from other manufacturers in terms of resolution, and the image quality is commendable too. The 4K footage looks crisp and detailed, with great colour fidelity. Image erformance is on a par with the GoPro Hero 5 Black but it’s worth noting that audio quality is negatively impacted by the need to use a case.

Should I buy the Garmin VIRB Ultra 30?

The Garmin VIRB Ultra 30 is an extremely accomplished action camera. GoPro is going to be pretty hard to knock off its pedestal, but the Ultra 30 has most of the key features of the GoPro Hero 5 Black for a similar price, alongside a wealth of sensor connectivity capabilities that the latter doesn’t offer.

Garmin now has one of the best action cameras on the market in the shape of the VIRB Ultra 30, particularly for extreme sports thanks to all of the extra telemetry data. The VIRB Ultra 30 makes for a solid alternative to the GoPro Hero 5 Black.

The VIRB Ultra 30 is the best action camera from Garmin yet, losing none of what made previous models special whilst adding great 4K, plenty of high-speed options, and a plethora of bonus sports features.