What is the Ricoh Theta S?

The Ricoh Theta S is the third generation of Ricoh’s 360-degree shooting camera, which we first got our hands on at IFA 2015 – and it’s the first to offer decent video abilities. The VR craze is very much in full swing right now, but the focus is still mostly on consumption. Choices for producing your own VR content are rather limited, with some products that were announced years ago – such as the Geonaute 360 – failing to materialise.

According to the Ricoh engineer I spoke to at the company’s stand at the SXSW trade show in Austin, where I obtained the Theta S for this review, demand is so high for this product that they just can’t make them quickly enough.

That’s because this is one of the first affordable 360-degree cameras you can actually buy, and the sub-£300 price is particularly tempting. The magic sauce of the Theta S is that it has two lenses and two sensors pointing in opposite directions, to capture the full 360 degrees.

The Theta S has a similar initial look and feel to the Flip cameras that were all the rage a couple of years ago. It uses an upright “candy bar” form factor, so you hold it like you would a mobile phone. However, there’s no built-in screen, so if you do use it like a mobile phone then your face will take up a large proportion of the frame.

Instead, it will be best on the end of a monopod held above your head, or sticking up rather ridiculously from your helmet during extreme sports. In fact, the first thing you realise after your first session with the Theta S is that shooting 360 video isn’t like recording regular video.

You actually want the camera to be as static as possible, because the viewer can choose their own point of interest. Just make sure that one of the lenses is pointed generally towards your main area of action.

What takes the Theta S beyond being a gimmick is that the two sensors included are of reasonably high specification. They’re 1/2.3-inch with 12 megapixels, and their output stitches together to make a 14-megapixel image. The sensor size and resolution isn’t far off those used by high-end consumer camcorders, which is impressive given the price of the Theta S.

Pocket camcorders capable of shooting 360-degree video have been around for more than five years now. The Sony Bloggie Touch MHS-TS20K included such ability, but recorded onto one sensor using a lens and mirror attachment. As a result, resolution was low. But the Theta S promises a very different experience. The lens is here is rated at f/2.0, which bodes well for low-light performance alongside the decently sized sensors. 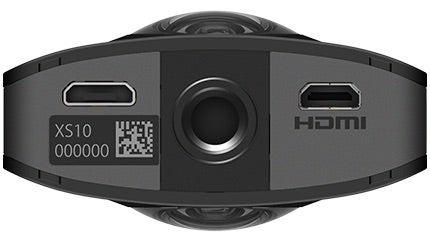 You don’t get a huge amount in the box, however. Alongside the camera itself – which incorporates 8GB of Flash memory (enough for 25 minutes of footage), but has no removable option – you get a neoprene sleeve to protect the device in transit and a USB cable. There’s micro-HDMI on the bottom of the unit alongside micro-USB, with a tripod screw mount in between, but there are no accessories are included.

The Theta S itself has just four buttons – three down one edge, and one large one on one side. The three smaller buttons turn the camera off and on, toggle Wi-Fi, and switch between camera and camcorder modes. The large button then takes a picture or begins video recording, depending on the mode.

With no screen, you can’t change any settings on the camera itself, and you can’t see what you’re shooting. However, you don’t necessarily need to see what is being shot with a 360-degree camera, since it captures almost everything. You just need to ensure the device is basically upright, and that there are no large, unwanted objects close by that will obscure what you actually want to capture (like your own body…)

Like so many camcorders these days, the Theta S has built-in Wi-Fi and a smartphone app, and in this case it’s almost essential. The majority of the features can only be accessed via the app. In video mode, there isn’t much more you can do than choose between recording 1,920 x 1,080 or 1,280 x 720 resolutions.

When shooting photos, however, there are numerous image adjustments that can be made. In auto mode exposure can be adjusted between -2 and +2 EV. In Shutter Priority mode, the shutter can be varied between 1/8th to 1/6,400th. In ISO mode the range is from 100 to 1600, or there’s a manual mode where you can set both independently. With the two priority modes, the general exposure control is still available, so all these settings are flexible. There are 11 white balance presets available alongside the auto mode, but no manual option. 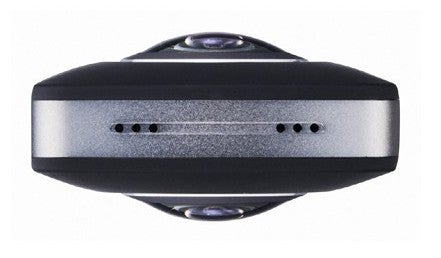 The app also doubles as a 360 viewer for use with Google Cardboard or other add-on viewer (although I had only a Cardboard available for testing).

Unfortunately, this works only with still images, not video. You can upload video directly to Facebook and it will be detected as 360-degree footage. So on a desktop, you’ll be able to pan around with the mouse; on a smartphone, the accelerometer will allow you to tilt and pan by moving the phone’s orientation.

However, if you want to upload to Ricoh’s theta360.com site or YouTube, the desktop software for Windows or Mac will be required. This takes the two discs you see if you open the raw video files and creates the bizarre stretched version used for playback – a bit like a flat map of the globe.

Annoyingly, you can only upload 10 seconds at a time to theta360.com, although YouTube gives you the full length. You need to upload the version of the video encoded by the desktop software to YouTube; it can’t handle the raw video file.

Ricoh is currently working on a driver to stream 360-degree video, which I was shown by the engineer at SXSW, but this is still at a rather early stage. There’s live-streaming software already available, but it refused to load on my computer. There’s a developer API, too, so expect further software to be created by third parties. For the time being, at least it’s relatively easy to upload and share video from the Theta S, particularly to Facebook.

Although the large dual sensors of Theta S promise better image quality than the gimmicky options of a few years back, this is only truly realised in still image mode. The video is captured into discs that are stored side by side within a 1,920 x 1,080 frame, so the resolution of the video once stretched out is much lower. This is a little disappointing when the sensors themselves could be capable of much more.

You can see some sample footage shot on the Ricoh Theta S on theta360.com here.

The YouTube version of the same footage can be seen here.

The panoramic photos have a resolution of 5,376 x 2,688, but they look pretty weird if you open them up in software that doesn’t understand the 360-degree aspect. These need to be uploaded to theta360.com or Facebook to interpret the panning facility and stretch them out. But the image offers plenty more detail than the video version.

You can see a sample 360 image shot with the Ricoh Theta S here.

Overall, the quality of the images is decent, and video is acceptable for this early stage of the VR hype cycle, but there will be much better to come in the next few years. It’s worth remembering that whereas HD or even 4K video is a framed view of the world, capturing 360 with the same level of detail would require many more pixels, and professional-grade rigs for GoPros (for example) use six separate cameras and then stitch their footage together.

Should I buy the Ricoh Theta S?

At the moment, if you want to try out shooting decent-quality 360 images and video, you don’t have many options. With its sub-£300 price, the Theta S is cheap enough to purchase just to get to grips with the idea. There’s no doubt that it will be superseded by better devices fairly soon, and the Theta S is still at the novelty level. The 4K-shooting Kodak SP360 is a tempting alternative already, and costs only £80 more.

However, the Theta S is easy to use and the results are acceptable for the price. Ricoh has jumped in early and provided something that’s far from perfect, but good enough to have some fun with the rising VR trend. It’s no surprise that this device has been selling like hot cakes. So it’s worth buying right now, but will probably end up languishing in a drawer within a year as more sophisticated alternatives arrive on the market.

The Ricoh Theta S provides decent 360 photos and acceptable 360 video for early adopters, but it’s likely to be superseded soon.