Samsung has overhauled its Samsung Gear 360 camera for 2017, adding some useful features, reducing the bulk and adding iPhone compatibility.

Altogether, the Samsung Gear 360 offers a far more refined experience than its predecessor, and for significantly less money. It delivers the best experience from a consumer-oriented 360-degree camera without breaking the bank.

The first Samsung Gear 360 had a large spherical shape to it, with a pair of tripod legs that screwed into the bottom. In that sense it looked a lot like the DokiCam I reviewed recently. For its second-gen model, Samsung has gone back to the drawing board and delivered a device that incorporates a natural handgrip.

It makes for a much more compact design, providing something that will much more easily slip into a pocket than the bulbous first-gen model. As you’d expect, its design is dominated by a pair of large lenses designed to capture the world from opposing viewpoints.

The Gear 360 has an almost all-white design, and it looks great. It’s lighter than the original, weighing around 130g. It has a plastic body that feels reasonably rugged but it’s not something you’ll want to throw around with impunity; this is not an action camera. It does at least have IP53 dust- and water-resistance, however. 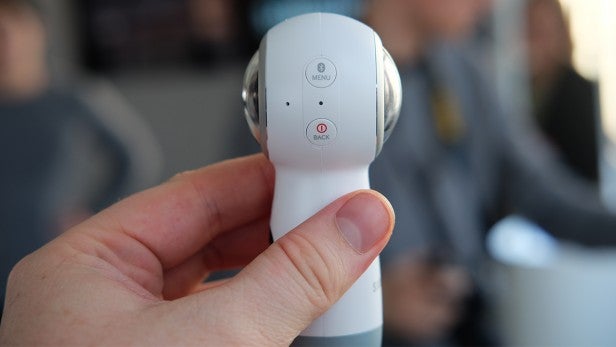 On the back – and there is a back – you’ll find a small LCD display and a shutter button within easy reach. The display will tell you what mode you’re in, and how much footage or how many still images you can capture, as well as remaining battery life. It’s easier to make sense of than many other 360 cameras I’ve tested that only have basic LED indicators.

One annoyance, however, was that the display doesn’t let you know if you’re set to single or dual lenses, or at least doesn’t make it obvious at a glance. On one occasion I thought I was capturing the world in glorious 360-degrees but it was set to only one of the cameras – which was a massive disappointment.

The top of the lenses has a pair of LEDs that glow green when the camera is in standby and red when it’s shooting video. They’re pretty easy to see so you know the camera is recording. Handily, there’s also another blue LED on the side that lets you know when a smartphone is connected to the camera.

Along the edge of the handgrip you’ll find a microSD slot hidden away and an exposed USB-C charging point. On another edge, between the two lenses, is a power button and menu button that can be used for toggling modes. 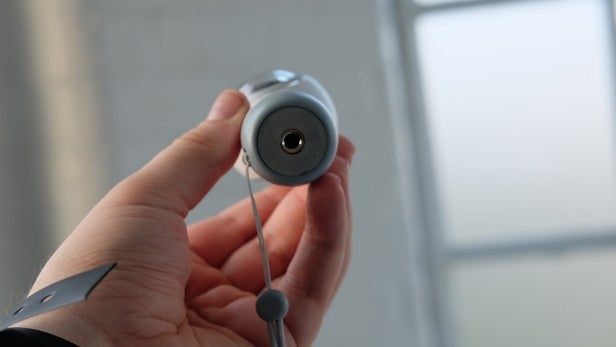 The base of the handgrip is flat, meaning you can stand the camera up on a flat surface without needing anything else. A strap accessory that also has a rubber hoop is included with the camera. It’s designed for you to place the camera into the centre of the ring, adding some extra stability so it won’t get knocked over so easily.

The problem is, being a hoop, it too needs to be placed on a pretty flat and even surface to be of any real use. Then, you also have the string visible in the frame of your 360-degree shots if you pan down, which is in fairness something that happens with most 360 cameras. It’s a minor annoyance but I found the camera strap pseudo-tripod accessory rather inelegant.

There is at least a standard tripod thread on the bottom, so you can attach your own tripod accessory or mount. I often found myself using a GorillaPod for extra stability and the ability to dangle the camera upside down.

The companion app, which is available on iOS or Android (only compatible with Galaxy phones) is well designed and easy to navigate. The camera pairs with your phone through a Wi-Fi connection, which is stable and reliable.

You’re then able to use the app as a live view of the camera’s sensors and can flip between different view modes on the fly, such as Standard or Round, which is similar to the Tiny Planet setting you’ll find on other cameras. You can also opt for a split view, giving you separate perspectives from each lens or only capturing from one lens. In this latter mode the Gear 360 operates like any other camera but with the slightly wider field of view like a GoPro. 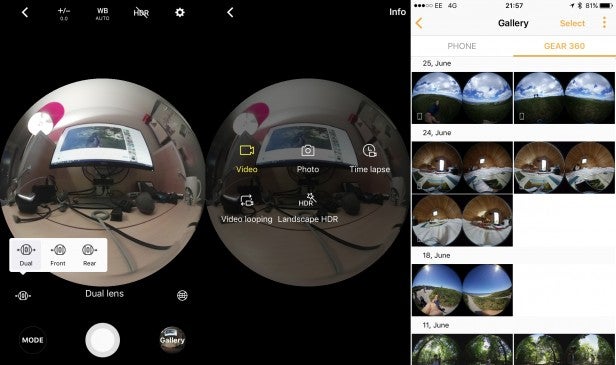 The app lets you easily switch between video, photo, timelapse, video looping and landscape HDR modes and you then have control over more granular settings like exposure compensation and white balance.

You can also use the Gear 360 app to transfer over your video and images, and the app will automatically stitch your content together. It will also let you save it in different viewing modes such as the aforementioned round or split views. This makes it really easy to share your content somewhere like Google Photos, YouTube or Facebook where it’s automatically recognised as 360-compatible.

For a more budget-friendly 360 camera, the updated Gear 360 has better image quality than most even though it’s had a resolution decrease from the original Gear 360 from 15MP to 8.4MP for each sensor.

As is the case with most 360 cameras, everything looks much sharper and crisper when viewing your content on your phone screen while using your fingers to swipe around to view the world from every angle. Strap your phone into a VR headset or upload to YouTube and it doesn’t quite hold up as well.

You can view 360-degree images in Google Photos without any user input or you can save versions in different formats such as Round (below). 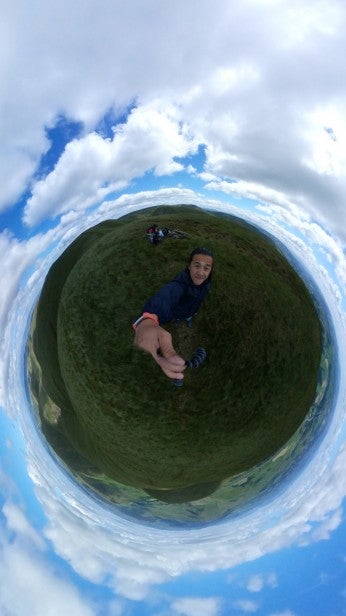 Still, overall, the Gear 360 (2017) is just about the best 360 camera I’ve seen around this price. You’ll find better image quality from something like the Kodak Pixpro SP360 4K but it’s significantly more money and far more involved. For something this small and convenient, the decrease in image quality is understandable.

If you connect the camera to a computer, you can also livestream in 360 video using the bundled software, which will also let you edit your video together. That’s useful if you have an event you want to share with people who couldn’t attend. 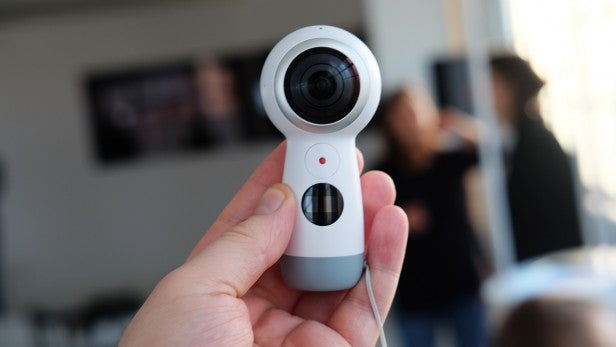 Battery life from the 1160mAh cell is pretty unremarkable. You’ll get shy of an hour recording at the full resolution from both cameras, whereas recording from just one lens at 1080p will get you about double that. Fortunately, you can just connect a portable battery pack if you need extra stamina.

If you happen to have a compatible phone, namely one of the Galaxy phone or an iPhone 6 onwards running iOS 10, it’s worth considering the updated Gear 360 if you want to dabble in 360-degree content. It makes recording videos and capturing images incredibly straightforward and approachable and the results are respectable, if not amazing.

There are some minor annoyances like the makeshift tripod when the old chunky tripod was good enough, and a battery that’s smaller than its predecessor, but otherwise the charming new design feels great. The Gear 360’s enticing package is then all tied together by a much lower price.