The most recent installments of Football Manager on PC/Mac are so detailed, the only way you’d truly be able to dedicate Mourinho-like attention to matchday preparations was to give up your day job.

That’s why Sports Interactive introduced Classic Mode, stripping back some of the complexity without sacrificing the features that make FM the best football management simulation game you can get your hands on.

After porting the Classic Mode to the PS Vita last year, Football Manager Classic is making its debut on tablets. Before you contemplate downloading, it’s only suitable for high end tablets including the iPad Air (first and second generation), iPad Mini (second and third generation) and over 40 Android tablets including the Nexus 9 and Samsung Galaxy Tab S Pro 8.4. You can check out the full compatibility list on the Football Manager website.

Compared to Football Manager Handheld, Classic has a significantly
bigger player database, more leagues to manage in, a 3D match engine and
gameplay that feels less bite sized and more in tune with the desktop
version.

As a result, this is the best football management game
you can play on a tablet, but that doesn’t mean it’s not without its
issues. 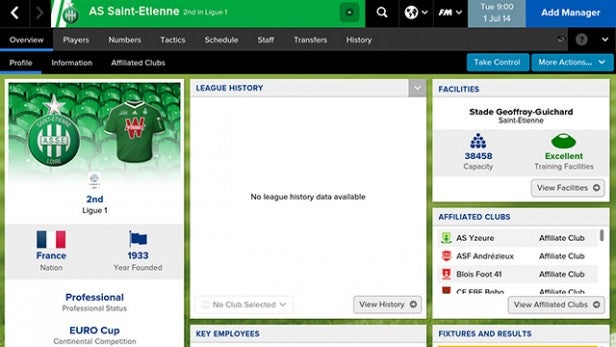 If you’ve played Classic Mode on Football Manager 2015, 2014 or 2013 then the layout will feel familiar. There’s a series of shortcut icons down the left hand side with the inbox dominating the rest of the screen. This is a touchscreen optimized game, so you can use long presses, taps and swipes to get around. But, the nature of the tiny buttons, even playing it on an iPad Mini 3, it’s all too easy to press the wrong button or have to tap an extra couple of times on the Continue button in the top right.

A search in the preferences shows there’s no option to magnify or adjust the interface to increase the size and hopefully this is something that can be rectified with an update.

Your managerial options lie with the standard Career or Challenge mode where you’ll be thrown into a series of scenarios. It could be saving a team from relegation currently languishing at the bottom of the table or proving Alan Hansen wrong and winning something with kids. One of the best features in the PS Vita port, the cross-save with the PC
game is sadly missing, but playing games across multiple
platforms is not being entirely ruled out. 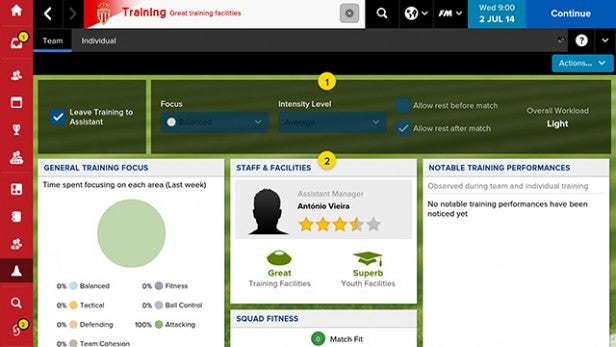 It’s the improved Career option that really impresses here though. The player database has grown to 150,000, which is up from 35,00 in Football Manager Handheld 2015. The nations you can manage in has grown (Peruvian First Division anyone?) with the option to run multiple leagues at the same time and even manage as low as the sixth tier of English football. Unsurprisingly, the more nations you pick to keep an eye on, affects the game speed so we’d say stick to one at a time.

Once you’ve made your selections and the database is loaded, (it takes around five minutes) it doesn’t take very long to realize that this is an entirely different level of football management on a tablet. Before you know it, you’re deciding on the bonuses for the season, transfers are already in progress and there’s disharmony in the ranks when you decide to strip the armband from the designated captain before the season starts. If you’ve only been playing Handheld version, it’s overwhelming at first, but the hotspot-style help guide means it doesn’t take long to get to grips with.

One of biggest areas to deliver greater managerial control is the training section. Here you monitor squad fitness, assign training plans for individual players and assess how happy the squad is after being made to endure an intense session after a game. The good news is that you can delegate the assistant manager to do this in the way Alex Ferguson used to let his assistant Brian Kidd get his hands dirty, freeing up time do what most love doing and that’s scouring the globe to find players to buy. 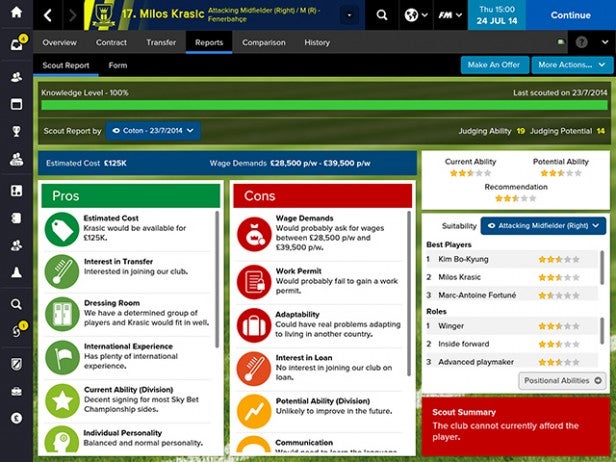 As mentioned, the number of players you can scout has significantly grown and the depth of information the scouting staff can report back with is much more useful. You don’t get the attribute masking option to make scouting easier, but doing your homework really does pay off.

Scout reports will tell you whether a player has a good fitness record or whether their personality fits in with the current squad. This level of details extends to reports on the opposition where it even breaks down it percentages of what time of the match the team is most dangerous. The transfer negotiations that follow are complex but in a good way, and often leads to a back and forth between club and agent trying to get the best deal. Stick to your wage budget and some players will not sign on the dotted line despite claiming they can’t wait to join the club.

When it’s matchday, choosing your starting eleven and tactics is an extremely fiddly process. The tiny menus really hinder the swiftness in doing this and can make getting through one game quite arduous. That’s coupled with some pretty frustrating loading times. This is not the instant get-in-and-game we are normally so used to in the mobile gaming era. When Sports Interactive says this is a PC game running on a tablet, they clearly mean it. 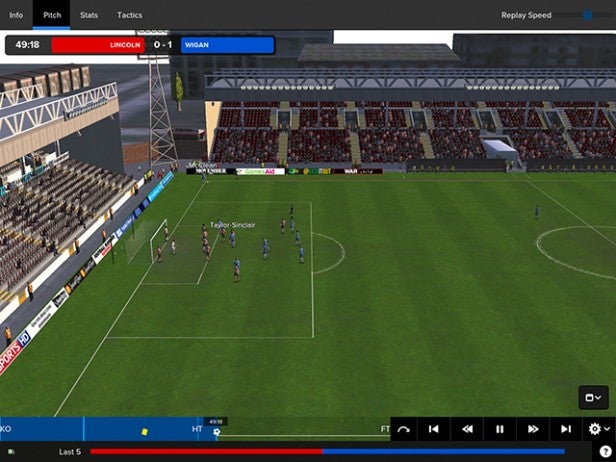 The 90-minute match experience is as comprehensive as loyal FM players could wish for. Along with the overload of real-time stats, the assistant manager is giving you a nudge about keeping an eye on a player whose knackered or getting dominated in midfield. The new live team changes means there’s no hold up when you want to tinker with the formation or the personnel. Post-match, handling the media is key to keeping squad morale high after a defeat or not stirring a reaction from the board with a comment deemed badly timed.

The inclusion of the optional 3D match engine will be good news for those who struggle to get engrossed in a match illustrated by a top down view of 22 dots moving around a pitch. It has its choppy frame rate moments but it’s nice to break up the stats overload. If you don’t even want to watch the match, there’s a new instant result option, which simulates the match. It’s one way to get around the laggy loading time and menu switching, but does take all the fun out of seeing your plans played out in full.

Verdict
Football Manager Classic is the game we hoped FM Handheld would be. Instead we’ve been made to wait a few years before getting our hands on a game that’s a clone of the desktop game. Finally, the managerial control over decisions in a match and on a day-to-day basis duties is at the level that truly feels like you are making a difference to matches and your season overall.

Yes, £15 sounds like a lot to spend on a mobile game, but what you’re getting is a pretty wholesome game that’s leaps and bounds ahead any other management game you can play on an iPad or Android tablet.

The downside to such a comprehensive port is that you have to live with some slow loading times and a user interface that could be better designed for touchscreens. Some will be able to live with these gripes but we found them tough at times.

If you can live with the wait between matches and issues with the UI, download this and prepare to say goodbye to your life.