Available on PC, Mac and Linux
Despite its simple premise, and the fact it looks like a revamped version of ceefax/teletext, Football Manager remains one of those confusingly addictive games that will weave its devious magic, to turn a quick 5 minutes into a long few hours.
With an almost perfect blend of gameplay styles, you’ll need a good head on those shoulders if you’re planning to offer up great tactics and decent micro management in a way that doesn’t so much affect the match directly but rather tips the odds in your favour and gently guides it towards an outcome you’d prefer.

Each iteration of the beautiful game’s beautiful background game has felt much the same, besides the expected annual upgrades, but this year, Sports Interactive have worked hard to shake things up, giving the whole look and feel of the series a complete refresh. While the core structure of the game stays the same, i.e ‘pick your team and do everything in your power to make them champions’ everything is a much more visual affair this time around, each players worth for example is represented by coloured icons, giving you an instant idea of their effectiveness in their current position.

Perhaps to bring in more players who were put off by the sea of words or perhaps a reaction to the worlds apparently lowered attention span (Thanks Flappy Bird), whatever the reason, it looks stunning. Well, as stunning as a spreadsheet can. 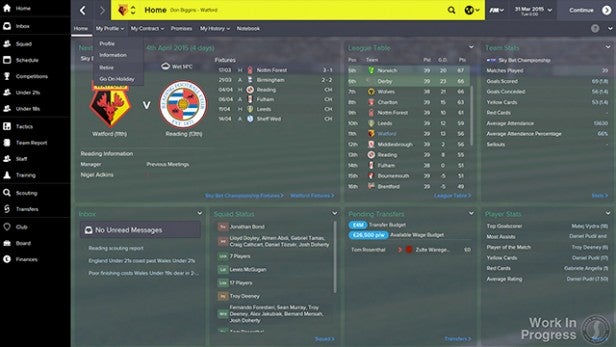 Continuing the theme of working lean, Football Manager 2015 utilises a simple sidebar as its main method of navigating through possible actions, leaving everything no more than a click or two away and with much more information spread across your screen while still managing to look minimalistic. That’s no small feat.

The key to success in Football Manager 2015 is knowing your strengths and weaknesses as a manager. Something which the game will press upon you at the very start of your career by asking you about your experience. You’ll then be asked whether or not you’ll be a ‘Tracksuit Manager’. This is the much more hands on skipper when it comes to players training and development, or a ‘Tactical Manager’ with the more strategic mind, focusing simply on planning for the big game, which is every game if you’re a decent manager. Just saying.

While this is probably the weirdest and oddly nerve racking interview you’ll go through, theres no need to stress too much as it’s not a simple black and white decision. You’re free to tailor your strengths and skills in a much more RPG fashion by dishing out attribute points as you so wish to breed the perfect manager. Just remember that your actions will affect the information at hand and how the club will treat you.

Clearly taking into account real life players diva like attitudes and demands, managing your squad isn’t as straightforward as putting the right player in the right position. You’ll need to stroke some egos and help each player reach their life goals. Sure, you wont have to worry about clearing goats out of their dressing room or cleaning up impromptu firework displays in hotel suites after a late night bender, but be prepared to have a one to one chat with your star midfielder every now and then if you want to cultivate that father son relationship that’ll spur him on.

This isn’t something simply reserved for out of match time events, if you need to pull someone aside and let them know that you’re this close to hurling a boot at their face, then you can go ahead and take them to one side to offer those golden words of “come on! dig a little deeper!”


If the whole team are getting a little complacent, then go ahead, shout at your squad to focus (insert video of Dwayne ‘The Rock’ Johnson here). You’ll need to learn balance in this instance though, as a manager forever hurling abuse at their team wont often get results. At least, thats never worked for me.
This simple addition really added a depth to the mid-match tactics that I didn’t expect to experience and really put me into the game that little bit more. I could almost feel the velour tracksuit as I stared, beady eyed at the screen and gave each player a good bit of verbal support and sometimes, when needed of course, abuse.

Meetings are still somewhat of a tiresome affair, although Sports Interactive should be applauded for creating a more mixed bag of questions and responses, with a more natural, and less dragging, pace. They still don’t feel like a 100% necessary evil, but if you spend time with Press, you’ll notice that just like your team of pre madonnas, each reporter will have his or her own personality and agenda, with the trashier publications looking to raise your blood pressure and create feuds simply for the sake of news.
This mechanic is beautifully executed and, rather chillingly, reflects the real life world of sports and tabloid news.

As with everything in Football Manager 2015, It’s about measured actions. While no half measures is a great turn of phrase, it wont serve you well in the world of football management. When you’re talking to staff or more importantly press, be careful how you respond as it could really effect your teams moral. If a player comes to you for help and you let him down, your whole team could end up on a downer. Start a fight with the opposing teams manager and you could stir the hornets nest, riling up the opposing team so they’re more pumped than your own squad, which could be just the thing to turn the tides of a big match.

Ripples in the water and all that eh?

Should you need to see more in order to boost that imagination, or simply a break from the vast ocean of text and graphs, the games 3D Match looks much better this year, with a reinforced set of animations and player models, but while matches look smoother and are generally a big step forward, this isn’t Fifa 15 so don’t expect too much in the ground breaking visuals department.

The atmosphere feels much more lively, largely in part to the crowd who’ll react to the matches events, waving banners as stewards stand by the tunnels, ready to tackle streakers (although, please note, there are no streakers) and presumably unofficial NPCs.
Players are clearly affected by the change in weather too, with those used to sunnier skies donning gloves during the wet and windy seasons, another addition which may seem trivial but goes to add more depth and a much more authentic experience as you wait to see the effects of your actions as they play out.

Classic Mode makes a triumphant return, slimming the experience down to a streamline game for those that simply want to sign up stars, make a few decisions and bring their team to victory without all the superfluous meetings, settings and decisions. A great mode for those in need of a quick footie manager fix as well as complete novices, features such as instant results or skipping pre-season let you focus on pretty much nothing but action.
Should you want some more control, you’re free to take training into your own hands and focus on the team or individual squad members.

Challenge mode also makes a comeback, perhaps with less fanfare though as it remains largely unchanged from previous iterations, but there’s still a lot of fun to be had as the game throws you into a handful of awkward scenarios such as money troubles and injury woes. Something that will no doubt appeal to those short on the hours career mode will devour.

Verdict
It’s clear that Football Manager 2015 has everything it needs to be the perfect sequel. While maintaining all the features and gameplay you’ll have been addicted to from previous entries, so much has been expanded upon. Aesthetically the interface has been refreshed to make the whole experience much more user friendly, while also working to speed up seasons. Being able to communicate with your team mid match really throws you into the game, investing you in the outcome that much more. Never before have I felt more like a manager, pacing the sidelines (well, my living room) and watching my team like my sky rocketing cholesterol. If you love football, you’ll love this. Simple.