What is the Samsung Galaxy Tab S 8.4?

Samsung’s tablet range is a confusing thing — no company makes more varieties than it does and we only reviewed its last top-end tablet, the Galaxy Tab Pro 8.4, in March this year. As a design the Galaxy Tab S 8.4 is merely an evolution, but its signature feature is a hugely impressive Super AMOLED screen that has the quality to give the Apple iPad mini 2 Retina some serious competition. If you’re in the market for an Android tablet right now, it’s really hard to look past this one. 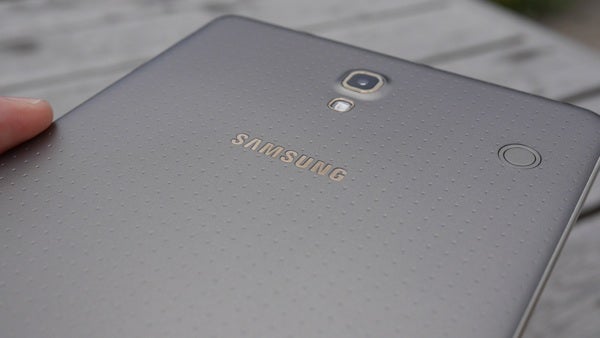 While the Galaxy Tab S 8.4 is an evolution of the Tab Pro 8.4 from earlier in the year, it’s a much needed one. The Tab Pro suffered from the ill-advised faux leather and fake stitching effect Samsung introduced in 2013 with the Note 3, and it didn’t sit comfortably with the Tab Pro’s premium price. In comparison the Tab S 8.4 is a huge improvement, though it still falls a long way short of the metal, unibody design of the iPad mini 2.

The Tab S 8.4, along with its larger sibling the Galaxy Tab S 10.5, has a similar dimpled, soft-touch finish as the Galaxy S5. It’s a pleasant texture to handle and the slim, curved edges sit comfortably in the hands. The gold trim on the edges looks like metal, but a few very subtle joins show that it clearly isn’t. That’s fine, though — it’s a big improvement on the slightly weird ridged edge of the Galaxy S5. 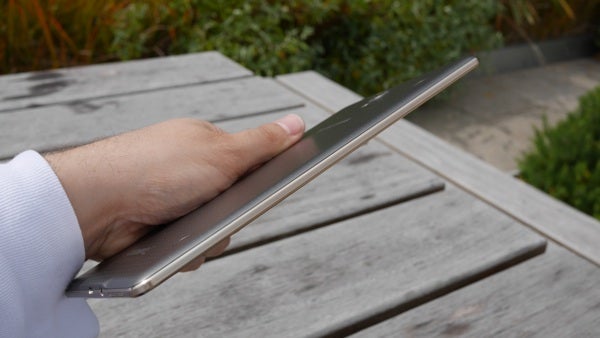 The Tab S 8.4 feels solid, too, which is impressive considering it weighs just 294g, a good 30g or so less than the iPad mini, and is a measly 6.6mm thick. Indeed, the only thing we’re not crazy about is the colour combination of gold and bronze on our review sample — it feels like a slightly awkward arrangement to our eyes, so we’d go for the white and gold version given the choice.

Another addition to the design is a new method of attaching cases. On the rear are small sockets into which the official cases clip into — it’s rather like the popper on a jacket. It’s not as elegant a system as the magnets of the iPads, but it’s very effective.

We weren’t sent a case for review, but we sampled the case options — a simple screen cover and a front and back folio case — at an earlier preview event and they’re very nice. They don’t add too much weight and, like most cases, let you stand the tablet up. They’re worth investing in should you buy a Tab S 8.4. 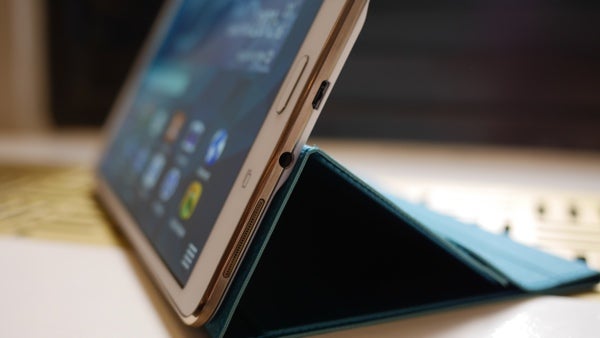 As for features, the Tab S 8.4 is loaded with all the latest options, including 802.11ac Wi-Fi, and Blueooth 4.0. There’s a microSD card slot to expand on the 16GB built-in storage, and an IR blaster on the right edge (i.e. the top when held in landscape) that lets you control your TV using Samsung’s custom app. There are cameras front and back and the main rear camera has an LED flash — an unusual feature for a tablet.

The other key new feature is the addition of the fingerprinter scanner from the Galaxy S5. As we’ve discovered before, though, Samsung’s fingerprint scanner isn’t as accurate or reliable as Apple’s Touch ID. We found it works first time maybe 40/50% of the time, which is really irritating if you use it to unlock your tablet. It’s even worse if you hold the Tab S in landscape, as the ‘swipe and scan’ method Samsung employs is very sensitive to the angle with which you swipe. Consequently, the only way to make it work is to either contort your finger or thumb or simply switch to portrait. 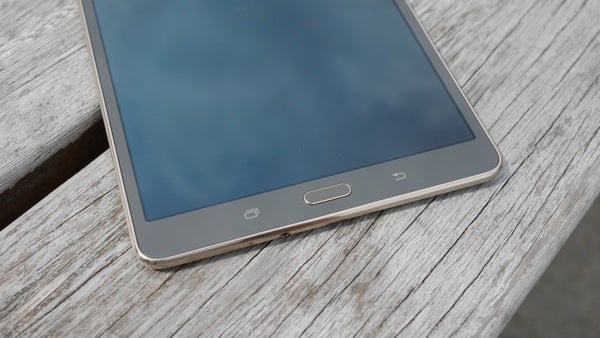 While support for PayPal gives Samsung an edge of Touch ID for the moment (iOS 8 will support third-party apps), Samsung’s system simply isn’t robust for regular use. It’s a nice extra, but you’ll need the patience of a saint.

The other key feature is SideSync 3.0, which lets you access, control and share information with compatible Samsung smartphones like the Galaxy S5. It means that, among other things, you can take calls on your tablet when your phone is another room — we’ll get into the nitty gritty of this later on, but it’s about time we took closer look at the screen.