Anyone who has seen the Toyota Yaris adverts on TV will be aware of the concept of “Big Small”. This is essentially a lot of power in a small package – miniaturisation without a loss in speed. Both the Sony Playstation and Playstation 2 were replaced with smaller more compact versions, just as the Nokia 3210 was shrunk down to the 3310. Less it seems, is often more. Despite processors moving towards lower power overheads, a la Core 2 Duo, and motherboards shipping with pretty much everything integrated – we still seem to be stuck with gigantic ATX motherboards!


That’s a little unfair, because there are of course several SFF barebones manufacturers now, (Shuttle being the instigators of this trend) and even Viiv PCs Viiv PCs barely bigger than a CD-ROM drive. But if you want a fully upgradable machine made of standard components, the only real way to go is microATX.


As we showed in our build your own media PC article, MicroATX can be both attractive and practical. But can it make for a powerful gaming rig? I decided to take a look at this nForce 4 SLI motherboard from eVGA to put this theory to the test.


This board is Socket 939, which has recently been replaced by Socket AM2. It might seem a little pointless to be considering this, but if you have a Socket 939 chip already on an AGP motherboard, then a PCI Express motherboard would be a good upgrade to increase gaming performance, and wouldn’t involve throwing the rest of your system away. After all, that low latency 400MHz DDR memory wasn’t cheap, was it? 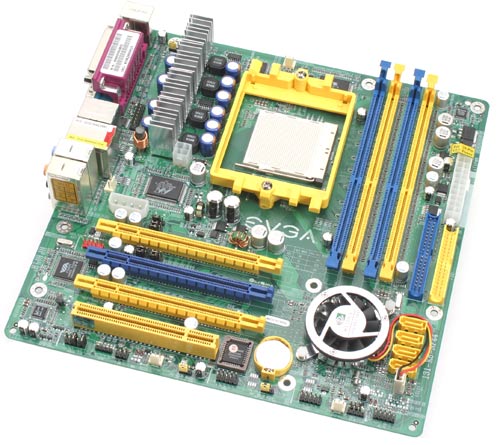 As you can see, at 245 x 245mm, eVGA has squeezed in quite a lot of features. Most microATX motherboards only give you two DIMM slots, but this has four for the maximum upgrade potential, while taking advantage of the dual channel memory that Socket 939 processors allow. 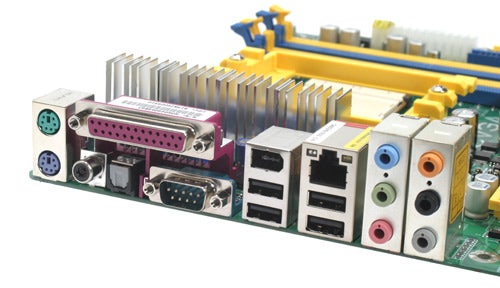 Gigabit Ethernet and eight channel audio are included, with both analogue connections as well as S/PDIF outputs in both coaxial and optical format. FireWire and four USB 2.0 ports make an appearance, as well as the usual parallel port, serial port and PS/2 ports.


You’ll notice, that as well as the single PCI slot, there are three of the larger PCI Express slots. When in SLI mode, the two outer slots become x8 slots with the centre slot becoming a x1 slot. When in single card mode, the centre slot becomes an x16 slot. There are several ways motherboard manufacturers switch between SLI and single card mode. I’ve seen Epox just hard-wire both the slots to eight lanes, I’ve seen DFI use huge banks of jumpers, I’ve seen Asus use expensive digital switching technology, while most other manufacturers just use the SODIMM approach. EVGA’s approach requires just three jumpers to be moved, which is hardly inconvenient and cheaper than any digital method.


This is not based on the dual 16 lane nForce SLI x16 chipset, but I expect this is a size constraint more than anything as this requires the use of two separate chips. This shouldn’t make a huge difference to performance, but we’ll let the benchmarks be the judge of that.


You’ll be hard pushed to find a microATX case that will allow you to see the motherboard once fitted, and even then you probably won’t be able to see past the mass of cables. But for those who are worried about looks, this board is certainly striking, with a green PCB and blue and yellow plastics.

My experience with MicroATX motherboards is the BIOS always tends to be a little lacking. I’m not sure why this is – perhaps they aren’t considered profit making enough to justify development time. It’s catch 22 though really, as if companies did develop the BIOS’ a little more, then they would probably sell more. 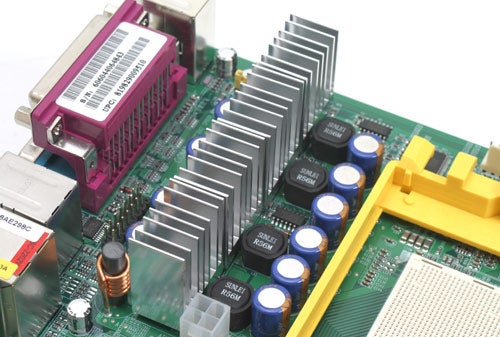 Unfortunately, this eVGA gets put under the same label. There is a limited number of memory timing adjustments, although you do have control over the Data Command Rate (1T/2T). HT frequency is adjustable and the VID/FID settings are adjustable too to control the CPU multiplier and voltage. You can even boost the memory voltage a little. Not too bad really.


However, all these adjustments were let down by the board’s inability to boot at anything above 220MHz. Not only this, but it has a distinct habit of hanging whenever you hit reset.


I can only assume that as there was no option to do with PCI Express frequency in the BIOS, that there was no PCI Express lock in place. From experience, this is often what limits a board to the 220-230MHz area. I can only hope that both this issue and reset issue are solved in a future BIOS update, but who knows.


I did try downloading a new BIOS from the eVGA website, but there was only one available for the nForce 4 platform. I assumed this was correct and that perhaps it used the same BIOS for its ATX and microATX motherboards, which is quite plausible. If the BIOS was wrong, the flash update software should have kicked up a fuss, but it flashed fine. Unfortunately, the board wasn’t happy at all after the update and stalled on the eVGA logo.


For 2D testing, we used the same suite of software as our Core 2 Duo review. We haven’t tested this in any other Socket 939 platforms, so instead we compared to an AM2 5000+ and an AM2 FX62.


For 3D testing, we used the same suite of software we use in our graphics card testing (see here for details). For comparison, we have an Asus A8N32-SLI motherboard with an identical setup. For a graphics testing we usually have a 2T data command rate setting (for no other reason that that is how it defaults in the BIOS). But as the eVGA BIOS defaulted to 1T, I re-tested the Asus with 1T for a better comparison.


In the audio compression/decompression tests, this machine performed almost identically to the AM2 5000+. The extra 512K cache per core on the FX60 perhaps offset the DDR2 memory on the 5000+.


Virtualdub rendering shows the 5000+ clipping off 32 seconds, but the eVGA still gives it a pretty good run for its money.


File compression and Encryption was strangely faster on the eVGA setup than the 5000+. This also affected the audio/file compression multitasking test, where once again the eVGA was faster.


In gaming, the results were surprising. Generally speaking, because the memory controller is on the Athlon 64 itself, performance from board to board is almost the same. However, in this case there was around a ten per cent performance difference and as much as 50 per cent in Counter-Strike: Source. Naturally, this difference was less noticeable in the higher resolutions where GPU limitation kicked in a little.


Each card has only eight lanes instead of 16, but I find it hard to believe that this was the cause for so much deviation. If I hadn’t killed the board trying to update the BIOS, I’d be re-testing things to make doubly sure. 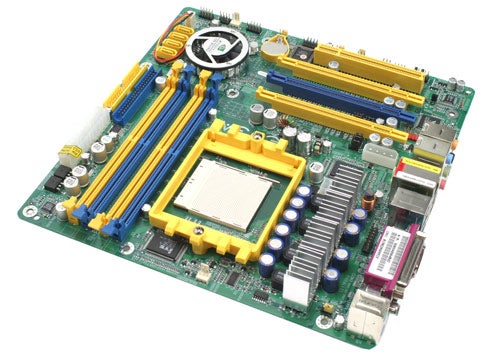 
This board certainly proved my original point, you can have power while maintaining a small footprint. As a board, as long as you don’t want to overclock (which is often difficult to do in small confined areas anyway), it’s fine. If you are building an entirely new machine right now, investing in Socket 939 may be an unwise move. But for those of you looking to upgrade an existing Socket 939 machine, or if you don’t want to get rid of that expensive DDR memory in your Socket A machine – then this board is definitely worth considering. Just keep an eye out for an updated BIOS that fixes the issue with resetting.