The upgraded Corsair One Pro retails for £2199.99 and comes with higher-end components. These include an overclockable quad-core Intel Core i7-7700K CPU, Nvidia GeForce GTX 1080 GPU, and a larger 480GB SSD and 2TB hard disk. It has the same 16GB of memory as the regular One.

The top-end Corsair One Pro I tested doesn’t have a confirmed price and is identical to the Pro outside of its use of a larger 960GB SATA 3 SSD and lack of a hard disk. 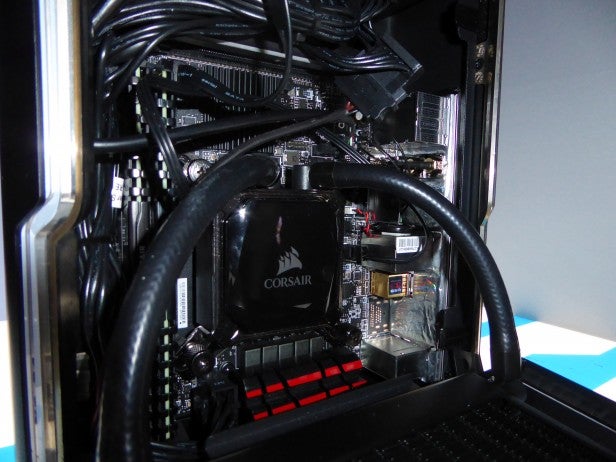 These specifications are undeniably impressive for a PC of the One’s size, but I can’t help but take issue with the fact that the company opted not to give it a faster M.2 SSD and used hard disks on the cheaper models.

This won’t be too much of an issue on the £2400 version, with a sizable SATA 3 SSD that’s big enough to fit most people’s game libraries. But it’ll be a massive pain on the basic Corsair One, with a piddly 240GB SSD that won’t deal with more than three or four modern games before running out of space, forcing users to rely on the snail-paced hard disk and sacrifice performance.

I’m also a little sad that Corsair’s not given buyers the option to upgrade to its top-end Dominator memory, which would offer a handy performance boost compared to the Vengeance parts used in the One. When you’re buying an ‘utlimate’ PC, missing out on top-end storage and memory is slightly disappointing, albeit far from a dealbreaker. 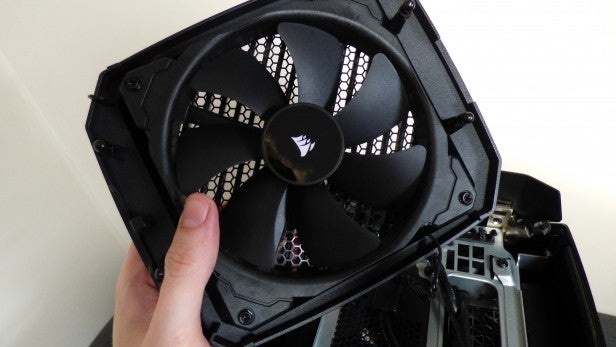 These two issues would be nearly non-existent if it was easy to upgrade the memory and SSD, but sadly the One’s compact design makes accessing the slots on the motherboard a wee bit tricky, even for seasoned builders. This, coupled with the fact that Corsair says damage caused while modifying the machine voids the product’s warranty, means you’ll probably want to wait for the warranty to expire before digging out the screwdriver.

Fortunately, outside of this, the flagship model I tested performed brilliantly well during testing and matched the performance of equivalently specced machines. On the general Geekbench 4 benchmark, the Corsair One notched up 5462 single- and 17,511 multi-core scores, putting it on a par with, if not above, most similarly specified rigs.

The HP Omen X, which is of equivalent spec outside of its use of a previous-generation Skylake i7, scored 4295 and 17,198 on the same test. The Skylake i7 and GTX 1080 configuration of the Lenovo Ideacentre Y710 benchmarked with a slightly lower 14,661 multi-core score.

The One also performed well in the GPU-focused 3DMark Fire Strike Ultra benchmark, where it enjoyed an overall 17,690 score, which again is on a par with most similarly specced devices. The GTX 1080 Omen X scored 17,223 on the same test.

The PCMark 8 Creative score of 5979 is also solid and means the One is powerful enough for video editing and creative work, which is hardly a surprise.

Actual gaming performance reflected my synthetic benchmarks’ findings. With VSync off, the One ran Rise of the Tomb Raider’s benchmark in its Ultra settings in 4K at an average of 48.9fps and at 129fps in 1080p resolutions. 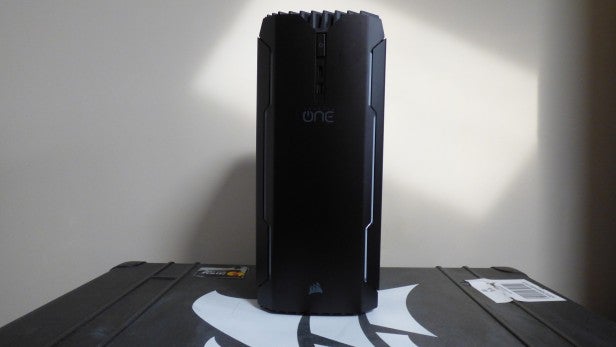 Heat and fan noise were also surprisingly stable. Though there is a noticeable whir when you run intensive games in quiet environments, if you’re wearing headphones or even using desktop speakers, you almost definitely won’t be able to hear it. The CPU, for example, never topped 75 degrees Celsius in my testing, which is impressive in such a compact chassis. The GPU was even cooler.

The only slight disappointment with the One’s performance is its 528.15 MB/s read, 439.62 MB/s write speed AS SSD scores, which are hardly surprising given its use of a SATA 3 SSD. An M.2 SSD, by comparison, would have been three or more times faster.

Even with this issue, the fact the Corsair One can match the performance of devices close to twice its size is a testament to the custom cooling system’s design, and is a seriously impressive achievement.

The only way you’re going to get better performance is by investing in an equally expensive and significantly larger pre-build, such as the Overclockers Titan Gladius, which features two GTX 1070s in SLI and a Samsung SM961 nVME M.2 SSD. The Gladius scored a massive 19,523 in the Geekbench multi-core benchmark, 23,039 in Fire Strike Ultra and offers much better read speeds of 1752MB/s and write speeds of 1441MB/s.

But it’s horses for courses. There is nothing you can buy right now that delivers the Corsair One’s performance in such an ingenious package, and it’s not in the same category of other high-end tower PCs. It’s in a class of its own. 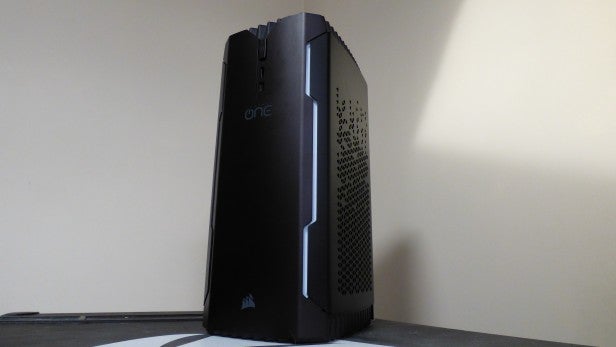 Should I buy the Corsair One?

If money’s no object and you’re looking for a 4K-capable, VR-ready PC that can be discreetly sat in the living room, then the Corsair One is a fantastic device.

The technical achievement of what Corsair has been able to do in such a small space can’t be overstated. With pricing starting at £1868 for the most basic version and the top-spec Pro configuration priced at £2400, the One is a luxury item.

There are better-value pre-builds out there, of course. The Zotac ZBOX Magnus EN1060 doesn’t match the Corsair One on specs, but it’s one of a select few 1080p-ready gaming PCs in the same size bracket. There’s a GTX 1080 version of that machine available, too. With pricing starting at £890 it’s also much cheaper although you have to buy memory and storage separately. The Alienware Aurora may be bigger, but it has a much wider range of configuration options, is easier to upgrade and significantly cheaper, with pricing for the GTX 1070 configuration starting at £1278.

The Corsair One is the ultimate lounge PC, but cost-savings in memory and storage left me feeling very slightly short-changed.