What is the Lenovo Ideacentre Y710 Cube?

Who said that gaming PCs had to be big and overbearing? With the Ideacentre Y710 Cube, Lenovo has crafted a high-spec PC that you can easily move around, one that can handle games in 4K.

However, a high price, relative difficulty in upgrading, and a comparatively slow SSD come as the fairly significant trade-offs especially when the likes of Alienware can offer better value.

I’m a huge fan of its look, too: the classic red and black colour scheme is stylish without being overbearing. From the front, the Y-shaped red light makes the Y710 Cube look a little like a Cylon, but what’s wrong with that?

Soft-touch plastic, the red fins on top and a carry handle are the finishing touches – this is one of the nicest-looking cases I’ve seen in quite some time. 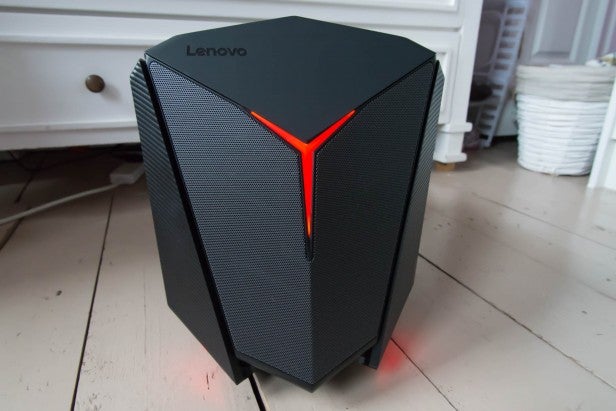 At the front of the case, you’ll find two USB 3.0 ports, plus 3.5mm headphone out and microphone in jacks. They’re neatly positioned exactly where you’d want them.

Around the rear are the other ports: four USB 2.0, two USB 3.0, five 3.5mm audio jacks, optical S/PDIF and Gigabit Ethernet; 802.11ac Wi-Fi is built in, too. There’s also a single PS/2 port, although I can’t imagine any serious gamer will have a use for this. 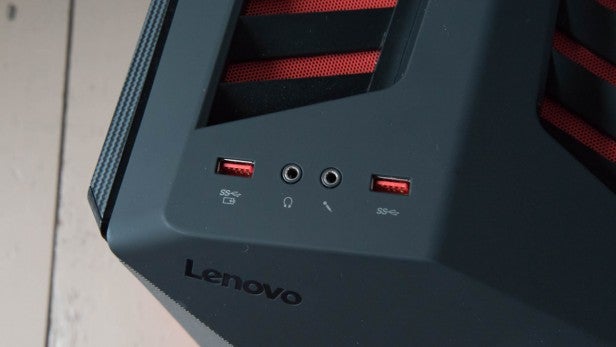 Graphics ports are well covered by the Nvidia GeForce GTX 1080 graphics card, with DVI, HDMI and three DisplayPort outputs present. That’s plenty and makes it easy to hook this computer up to a variety of 4K displays. 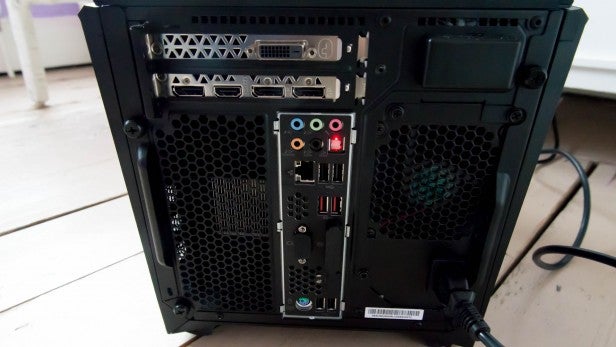 Usefully, the sides of the case are removable, so that you can get to the components inside. Unfortunately, once inside it’s rather a cluttered mess, since  there isn’t much room.

As a result of the small motherboard, there are only two RAM slots, which means an upgrade would require you to ditch the current memory. To be fair, with 16GB of DDR4 RAM pre-installed, you’re unlikely to need to upgrade any time soon.

In addition, there are only two SATA ports, so it’s impossible to add further storage without replacing one of the current drives. At least the simple access means that any home repairs are relatively straightforward.

Presumably since this is a gaming PC, Lenovo has forgone its usual wireless keyboard and mouse set and has opted for a wired pair instead.

The low-profile keyboard with its Chiclet-style keys isn’t bad at all. The keys are a tiny bit soft but responsive enough. With a full-size keyboard layout, I certainly found it quick and easy to type on this model. Without any macros or programmable hotkeys or mechanical switches, it clearly isn’t a gaming keyboard, and is likely to be one of the first items to be upgraded. 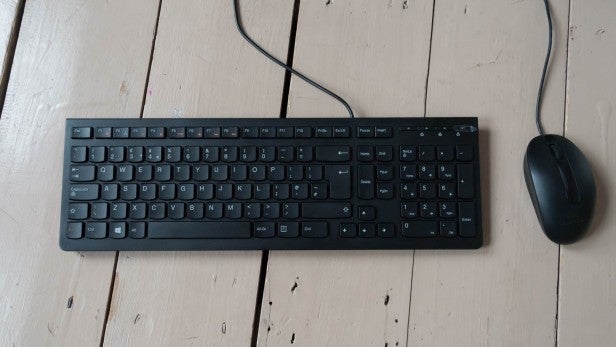 The mouse is exceptionally basic, and would be more at home in an office than with a high-end gaming PC. It’s sufficiently responsive for Windows use, but for games I’d recommend a replacement. 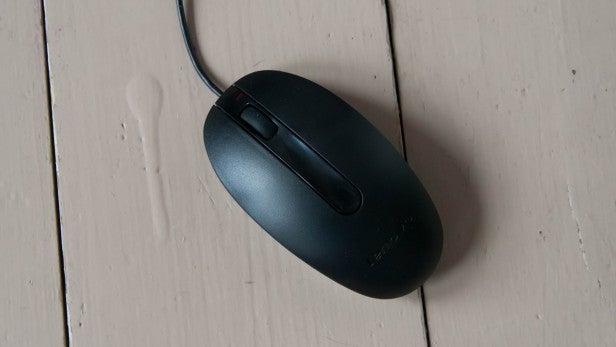 Interestingly, Lenovo has embedded an Xbox One Wireless Adapter inside the case and has supplied an Xbox One Wireless Controller. It keeps the outside of the case relatively clutter-free, since you don’t need any dongles, and makes it easier to get a more console-like gaming experience on your PC. However, this addition varies by model and region, so it’s worth checking whether the Y710 you buy actually comes with one.

At the heart of the Lenovo Ideacentre Y710 Cube is a Core i7-6700 processor. This quad-core chip benefits from Hyper-Threading and runs at a base clock speed of 3.4GHz – although it can Turbo Boost to 4GHz when there’s enough thermal headroom.

At this price, I’d have expected the superior Core i7-6700K, which has an unlocked multiplier and a faster base clock speed. Lenovo’s very basic and non-graphical UEFI BIOS may have made overclocking a little more fiddly, but I would have still expected the option.

That’s not to say that the Y710 Cube is by any means slow. The processor, combined with the 16GB of RAM, returned a fast score of 14,661 in Geekbench’s multicore test. A whopping score of 8,156 in PCMark 8’s creative test shows that this is a PC that will be able to handle any task. 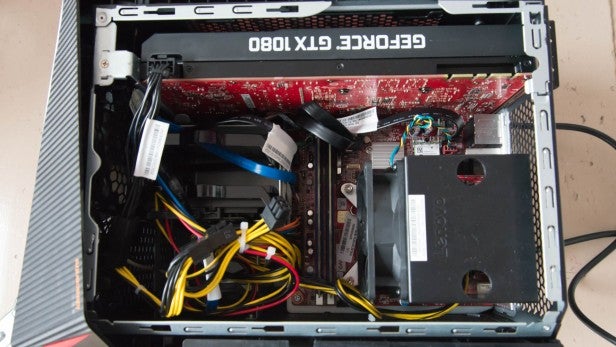 Not surprisingly, given that there’s an 8GB Nvidia GeForce GTX 1080 graphics card, the Ideacentre Y710 Cube is an accomplished gaming machine. However, on my review sample, the Nvidia Control Panel had been set to force on VSync, skewing my initial results.

Lenovo has installed a 128GB SSD and 2TB 7,200rpm hard disk. Both are configured separately, with the SSD for fast boot times, and the mechanical hard disk providing plenty of storage for games and documents.

Sadly, particularly given the price, Lenovo has used a SATA3 SSD rather than a faster M.2 drive. I measured read speeds of 493.2MB/sec and write speeds of 193.2MB/sec, which is disappointing. Even more annoying is its low capacity. A much better option would have been a 512GB drive without a secondary hard disk.

Note that there’s a constant fan hum from this PC. However, thanks to Nvidia’s efficient architecture, gaming doesn’t push the fan noise much higher. I didn’t find the Y710 to be particularly annoying when turned on.

Should I buy the Lenovo Ideacentre Y710 Cube?

If you value looks above all else then this is a good PC, but you can get better gaming specs elsewhere for less cash. Even if you don’t include UK-based boutique PC builders, a similarly (or better) specification Alienware Aurora is much better value. At the time of writing, a Core i7, GTX 1080, 512GB SSD model can be picked up for £1,625 from Dell’s website, which is a much better deal. 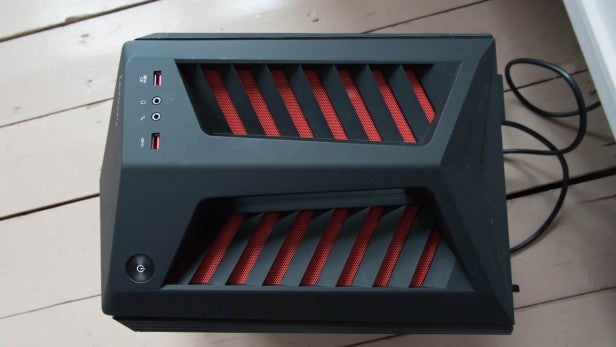 A fantastic-looking PC, but the slow SSD and choice of processor feel limiting at this price.