Available on Xbox One (reviewed), PS4 and PC

Buckle up, Ghost Recon veterans. We’re a long way from Advanced Warfighter, and not just in terms of the 6000km southwards shift from Mexico City to mountainous Bolivia.

For all that it shares GRAW’s third-person view, recon drones and four-man squad dynamics, Wildlands is another example of Ubisoft’s single-minded dedication to large-scale open-world games. Tactics take a back seat, action grabs the wheel and the whole vehicle’s heading in a familiar direction: Far Cry via Assassin’s Creed via Watch Dogs.

Even then, I’m not sure that even Ubisoft has delivered something this big, dumb or bombastic before.

Poking holes in Wildlands isn’t difficult. In fact, it’s on the fish/barrel, candy/baby level of challenge. The storyline is every bit as clichéd and stupid as you might expect, making you part of an elite unit working deep in drug cartel territory, taking down the cartel piece by piece. There are efforts at nuance, irony and satire, but these clash with the gung-ho spirit of the action.

It’s as if Wildlands can’t decide whether to be Bad Boys 2, Narcos or Sicario, so it just tries to be all of them at once. There’s also something really cheap and nasty about the way it uses brutality and violence, as if hanging corpses and tortured bodies represent nothing more than suitable set dressing for a villain’s lair. There’s nothing here you won’t have seen in a Call of Duty, but so what? That’s not exactly a byword for intelligent storytelling, either. 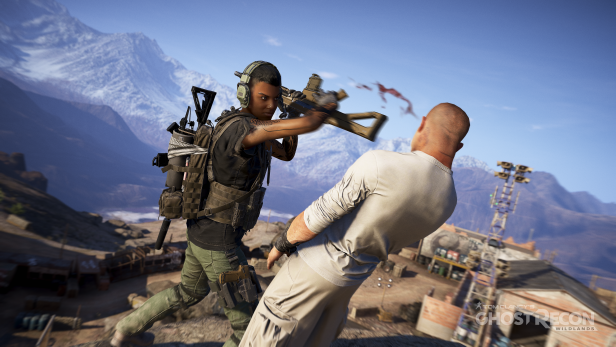 There are problems with the gameplay, too. As we noted in the preview, Wildlands hints at a tactical dimension without ever really committing to it. Sure, you can use your binoculars or a drone to spot ‘tangos’, mark them for death and synchronise shots – and there’s something undeniably cool about pulling that off. Yet your enemies are dim-witted, prone to dumb corner-camping strategies and spectacularly unobservant, to the point that shooting a helicopter down so that it crashes into a narcotics farm won’t necessarily stir the neighbourhood killers into action.

I’d say that they’re all high on their own supply, except they’re meant to be chewing coca, not nodding off on dope.

Your AI-controlled squad-mates are made of sterner stuff, capable of blasting away baddies and reviving you when you’re downed. However, they can’t do much more than that, and it’s not long before your limited command set begins to feel like it’s holding you back.

Beyond this there are minor technical issues that see dialogue from one mission appearing when you tackle a later one, or where a collision between a cartel soldier and an SUV might see an assault rifle sticking out of the bonnet for the duration of the ride. At one point, my protagonist was wondering around with a sniper rifle emerging from his chest, and couldn’t shoulder it to take a shot. Bizarre and annoying.

Ubigame-haters will take their usual grumpy satisfaction in knowing that Ubisoft has once again stuffed a map full of side-missions, systems and different collectibles without necessarily bothering to make them interesting or distinctive. Don’t worry if you botch stealing medical supplies, hijacking that helicopter or grabbing and interrogating that cartel lieutenant; another one will be along in a minute, and another one not too long after that.

And why does a game where stealth and cover are so crucial have such dated systems for both? The cover system isn’t half as smart or flexible as The Division’s. Stealth-wise, it’s comfortably behind both Assassin’s Creed and Watch Dogs. 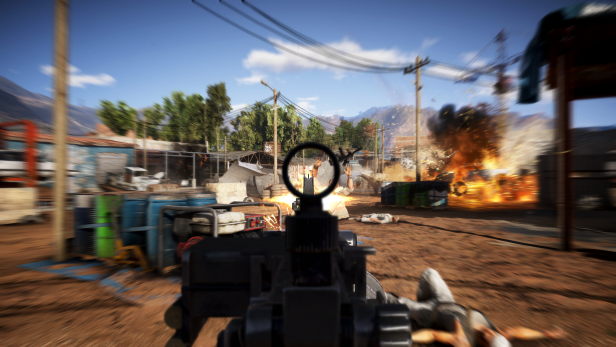 In short, you might expect me to say I hate Ghost Recon: Wildlands, but the horrifying truth is that I kind of love it. Why? Well, it really comes down to a couple of things.

Firstly, Bolivia. The world Ubisoft has created here is just vast, taking in a range of diverse environments and ecosystems: mountains, jungles, swamplands, desert, shanty towns, military bases, cocaine factories and upscale lakeside resorts. It’s fun to get around, too, whether you’re sliding a dirt-bike around the hairpin corners of some narrow, muddy mountain track, bouncing an SUV down a rocky hillside or racing a drug lord’s stolen sports car along the highways at ludicrous speeds.

And that’s just the land vehicles; there are zodiacs and powerboats to speed around in, not to mention helicopters to hijack and planes to pinch. If you’re a fan of stupid vehicle high-jinx in a sandbox playground, you’ll love Wildlands – and it all looks absolutely beautiful to boot.

Secondly, Wildlands has a more addictive and engaging gameplay cycle than some recent Ubisoft open-world games. Instead of finding towers to discover new collectibles and missions, you search for intel which will lead you to story missions where you’ll steadily frustrate the cartel’s plans. Bolivia has been carved up into regions, each with its own theme and its own cartel boss, and this gives each its own identity, so that you’ll end up smashing up casinos and running sex surveillance scams in one, then tracking down gold caches and fighting a weird, witchy cult in another.

At times, Wildlands feels like a bunch of different episodes crammed together, but with the caveat that you can flit between them just by getting in a car or leaping in a helicopter. 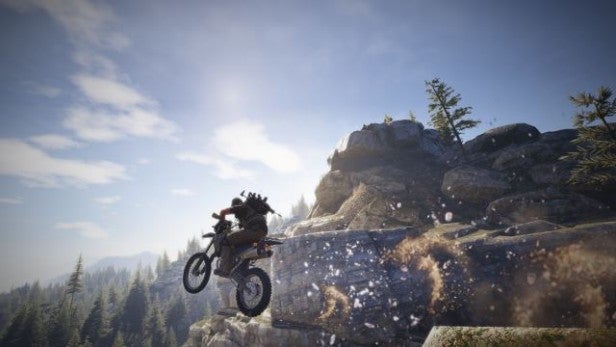 While Wildlands can’t match The Division’s compulsive shoot, loot and upgrade cycle, you can still enjoy levelling up, unlocking new skills and abilities and discovering and modifying guns, taking them apart piece by piece using the Gunsmith interface Ubi introduced with Ghost Recon: Future Soldier to tweak each and every one for your own style of play.

Most of all, though, Wildlands gets the action right. Driving around like a maniac, blasting away at cartel goons is a lot of fun. Sneaking through the swamplands to find hidden prototype drug-mule submarines can be tense and exciting, as you pick off your enemies from a distance while dodging hunting ‘copters. The same goes for infiltrating military bases, instructing your team to take out snipers while you search for a lurking cartel boss. Even at its silliest or most cliché’d, Wildlands is wildly entertaining.

If that’s true played solo, it hits a new level when you bring in other players. The whole shebang is designed for four-player co-op play, and you can join with friends or activate the automated matchmaking at any time you like. It’s flexible, too. It doesn’t matter if all four of you are fighting in different provinces or if two of you run one mission while the other two run another; Wildlands is cool with that.

The automated matchmaking does its best to pair you with players that have similar play-styles, at a similar level and with similar objectives on the go, so if you can’t play with friends – the ideal option – playing with strangers shouldn’t be a waste of time. 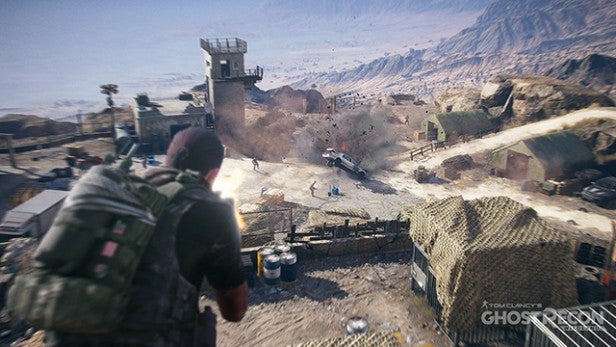 Of course, it doesn’t always work out. Sometimes you can find yourself tackling the same infiltrate-and-abduct mission over and over with some moron triggering the insta-fail alarm every time. At other times one player will pull down an army on your head before quitting out to leave you alone to face the music. But when you’re playing with friends or with a great bunch of strangers, Wildlands can be one part ridiculous to two parts sublime.

At one point I was close to death’s door trying to escape an almost endless swarm of cartel sicarios when a team-mate suddenly appeared in an armoured car. I jumped into the gunner’s position and it was payback time. I did one tricky infiltration mission alongside a pair of snipers, with me and another player running in to do the dirty work while they gave cover and picked off enemies around us. I’ve been part of a wrecking crew that dropped into a cocaine factory by helicopter before ripping the place apart with grenades and machine guns.

It can be crazy, chaotic or even just plain carnage, but there’s something about this over-egged, ultraviolent sandbox that just works.

I’m not suggesting for a minute that Wildlands is one of the open-world greats. It hasn’t got the style or attention to detail of Metal Gear Solid 5 or the depth of The Witcher 3. It’s not as rich, articulate or funny as GTA V – and any comparisons there aren’t helped by a single radio station that starts to repeat itself within the first few hours of play. Arguably, its sheer size and scale is a bit exhausting, both over long bouts of play and the campaign as a whole.

But if you’re looking for a really big, extravagant sandbox game that’s great fun solo and hilarious in co-op, don’t be shy. Wildlands isn’t Ghost Recon as we know it, but it’s the wildest party in town.