What is the Corsair One?

The Corsair One is the American hardware firm’s second stab at the living room PC market after the compact Bulldog PC that was announced in 2015. Corsair says it’s designed the system from the ground up to be the “ultimate lounge PC” – one that’s powerful enough to play games at 4K and run VR headsets, such as the HTC Vive and Oculus Rift, but small and quiet enough to discreetly sit in a regular person’s living room.

From a design perspective it’s an absolute marvel, and thanks to an innovative cooling system, the Corsair One is one of the most powerful mini-ITX gaming PCs Trusted has ever tested. However, its lack of upgradability limits its appeal to hardware fanatics. With pricing starting at a hefty £1799.99 for the most basic configuration, the Corsair One is also seriously expensive. 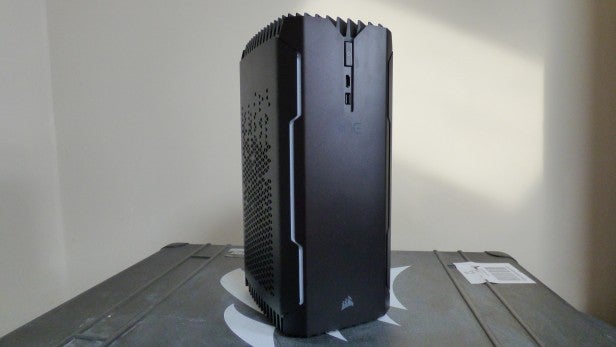 Corsair One – Design and build

On the outside the Corsair One is one of the most inconspicuous gaming PCs I’ve seen. Unlike most PC builders Corsair has avoided making too many outlandish design flourishes or adding many RGB lights. The only extravagance are the two light strips on the One’s front. Personally I’d have prefered no lights, but it’s easy enough to turn them off, or change the colour to something more subtle, using Corsair’s preinstalled Link software.

Even with them on the One is a fairly discreet device thanks to its ridiculously small dimensions. At just 380 x 200 x 176mm, it’s significantly smaller than some of the more compact gaming PCs we’ve seen recently, such as the Alienware Aurora and Lenovo Ideacentre Y710 Cube.

Despite its size, Corsair has managed to load the PC with all the connectivity options regular gamers and VR enthusiasts will need. Around the back you’ll find a single USB 3.1 Type-C, three USB 3.1 Type A, two USB 2.0 Type A ports alongside a gigabit Ethernet input and audio connectors. For VR headset owners, there are USB and HDMI ports on the front which makes setting up the Vive and Oculus a bit easier if you don’t want to have a VR headset plugged in all the time. 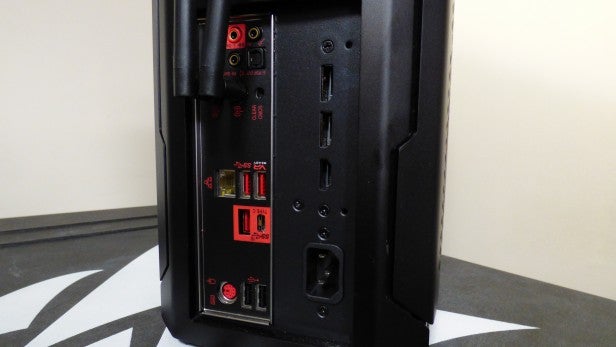 The One’s aluminium chassis can only be accessed using a rear-facing eject button that lets you remove the top of the device and single cooling fan. Once you’re inside, things get interesting. The Corsair One is one of the most space-efficient made pre-built PCs I’ve ever seen.

The headline features are its use of an MSI Z270I Growler mini-ITX motherboard and custom-built GPU and CPU cooling system. There are two fans, one on the GPU, which cools the power supply components of the card.

There’s also an assisted convection chassis fan that helps pull and guide cold air through the side-facing intake vents and then blows it out of the top.

The Corsair Link and diagnostics software also help control the system, instructing it to focus on specific areas, like the GPU, CPU or PSU, as needed in real-time. During my tests the cooling system worked a treat and is likely a key reason Corsair’s been able to load the mini-ITX case with a 10.5-inch GPU, full-height DDR4 memory sticks and SFX, fully modular PSU. 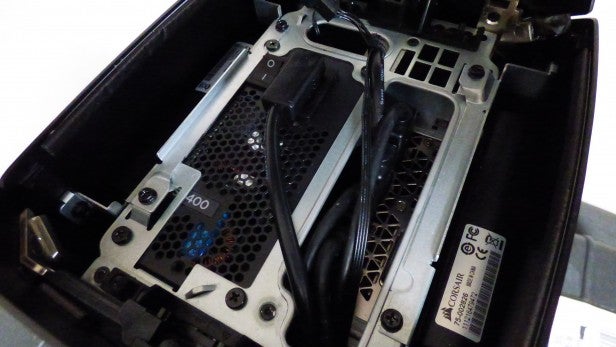 The only downside to the design is that it makes the Corsair One pretty much airtight on the inside. The only thing you’ll initially see when you pop the hood is the PSU and the top of the cooling system. To get any deeper you have to further disassemble the PC, removing the sides and unplugging pretty much every component of the cooling system and GPU until you finally reach the M.2 SSD input at the very bottom.

Opening it up is fairly tricky and one I wouldn’t recommend even seasoned builders risk, as it’s very easy to damage the system while burrowing. Instead most people would be better to heed Corsair’s advice and pay for the upgrade to be done at a support centre. This will be an issue for spec-heads or performance junkies – especially if you go for the lowest-specced configuration of the Corsair One.