Editor’s note: The GTX 1080’s about to get ray tracing support added to it in the very near future. Nvidia announced plans to add support for ray tracing via a drive update at its GDC keynote earlier in March. The update adding ray tracing to GTX cards is scheduled to arrive at some point in April and will let compatible Direct X games utilise the next generation graphics technology. Ray tracing was unveiled alongside Nvidia’s latest gen RTX, Turing graphics cards. The tech aims to let games render more realistic shadow, light and reflection effects. We’ll retest the GTX 1080 when the update rolls out. Check back then to find out how the GTX 1080 handles ray tracing.


Read our original review from 2016 below

The GTX 1080 is Nvidia’s latest top-end graphics card, ready to take on this year’s two-pronged assault of VR and 4K gaming. Its performance this year makes it by far the most powerful consumer level graphics card (ignoring the outrageous Titan X), and netted it our Graphics Card of the Year award at our 2016 Trusted Reviews Awards ceremony.

If you’re wondering why Nvidia’s made such an enormous song and dance out of a consumer graphics card launch, it’s because the company spent ‘billions’ on getting its new architecture to market and now has to make the numbers add up. Both financially and in GPU performance.

While the performance of the GTX 1080 isn’t in doubt, you definitely don’t need to spend the £600+ on it if your ambitions for playing games don’t extend to the world of 4K and VR.

To explain why the new GTX 1080 is supposed to be so powerful, we have to talk tech and the GTX 1080 specs for a few paragraphs. If that’s not to your tastes, you can skip to our benchmarking tests on page two of this review.

Still with me? Good. Here comes the tech…

To boost performance and efficiency on the hardware side, Nvidia has moved on from its previous architecture, Maxwell, and introduced a new technique called Pascal. The key feature of Pascal is that it uses a smaller manufacturing process (16 nanometres versus 28nm), which means a greater number of transistors on any given piece of silicon.

Doing so increases performance with a much smaller effect on power consumption (and therefore heat and noise) than by simply increasing the number of transistors by using a larger piece of silicon. 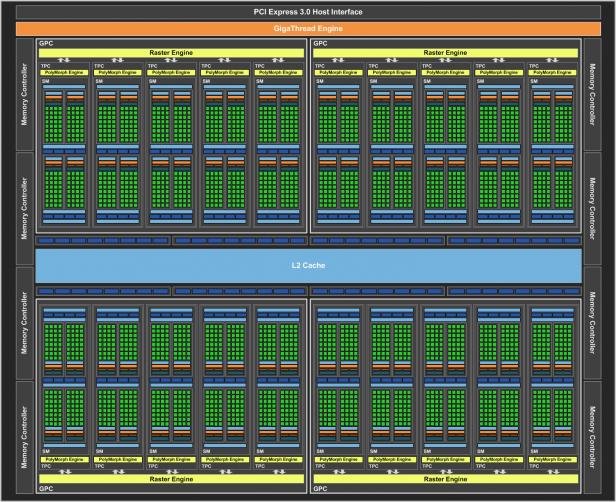 A diagram of the layout of the 1080 GPU. Count the CUDA cores

Peak power draw for our entire test system was 286W, compared to 270W and 336W on the GTX 980 and GTX 980Ti respectively, and peak temperatures never went beyond 75 degrees on Nvidia’s fairly conservative low fanspeed preset.

Related: The best gaming PC specs you can build yourself

Even those used to big technological leaps can’t fail to be just a little impressed.

It’s not just the processing power that’s improved; we also finally see a new development when it comes to memory. The GTX 1080 uses GDDR5X memory – like the RAM in your PC or laptop, but much faster and more expensive – replacing the GDDR5 found in the previous generation of Nvidia GPUs. 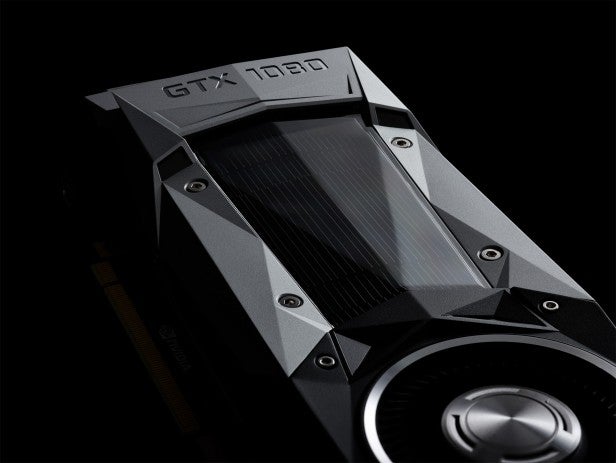 We now come to the physical hardware of the GTX 1080 itself. The Founders Edition card on review here is, let’s face it, probably not the product you’ll end up buying, and by the time you read this review there will probably be several third-party alternative GTX 1080s from the likes of Asus, MSI and EVGA available for less cash.

Still, if you pick up a Founders Edition card, you won’t be disappointed by its design. One member of the Trusted team commented that it looked like a ‘Decepticon disguised as a graphics card’. The sharp metal edges and angular design are certainly attractive and give the GTX 1080 a real sense of occasion. If that’s your sort of thing, you’ll be glad to have it in your rig.

It’s quiet, too. The single fan might as well be silent – buried in your PC case, there will be plenty of other components noisier than your GTX 1080, although if you choose to overclock (more on that later), you’ll definitely hear it kicking up a fuss if you push too far. During normal use, though, even when running intensive VR titles for extended periods, I barely heard a peep out of it.

In terms of ports, the GTX 1080 is fairly future proof. There’s a single DVI port, an HDMI port and three DisplayPort connectors. The latter is where the future-proofing lies: whatever the final specification of DisplayPort 1.3 and 1.4 are, the GTX 1080 is ready, and will be able to push 4K content at 120Hz, 5K at 60Hz and 8K (yes, really) at 60Hz using two connectors.

The HDMI connector is version 2.0b, which can produce content in 4K at 60Hz.

The GTX 1080 will also support HDR gaming and video playback thanks to its ability to decode HEVC video.

On the software side, Nvidia has come on leaps and bounds when it comes to multi-monitor and VR support. Much of the new tech won’t make a difference to visuals or performance immediately, but once developers begin creating games that support Nvidia’s features, you’ll notice a difference.

Related: Everything you need to know about Intel Core i processors

For example, there’s a form of what’s called asynchronous compute, which is a technology GPU fans have been talking about for the last few years. It’s something AMD has used to good effect in its last few generations of GPUs.

Async compute lets a GPU work on graphics and computing tasks simultaneously, effectively increasing performance by dint of both tasks, which need to be completed together, finishing sooner. Nvidia’s version is called ‘pre-emption’, which is slightly different, and instead of allowing tasks to be done simultaneously, it lets the GPU choose, at a more granular level, which tasks to prioritise.

Nvidia says that we won’t really feel the difference with most current games, but we’ll start seeing a difference when the new DirectX 12 standard becomes more common.

Next
Performance, benchmarks and conclusion Review