Available on Xbox One, PS4, PC (PS4 and PC reviewed)

Oddly for a game so focused on brutality, betrayal, violence, techno-fear and man’s inhumanity to man, generosity is Call of Duty: Black Ops 3’s biggest asset. This is a mountainous all-you-can-eat buffet of a Call of Duty, its steaming heated trays crammed with game modes, options and hidden features. It adds enough to the core gameplay to make it feel like more than just another lazy retread, and it’s easily the best-looking CoD to date.

The only problem is that, as with all all-you-can-eat buffets, some portions are a lot tastier than others, leaving you wondering whether a little more focus might have created something really exceptional.

Black Ops 3 is a solid installment that will please the series’ hardcore fans, but it’s not a mainstream crowd-pleaser in the way that last year’s Advanced Warfare was.

In a way, it suffers because of Call of Duty: Advanced Warfare. The first Black Ops bought a very distinctive flavour to Call of Duty; one born of conspiracy theory, spy thrillers and darker style of storytelling. The second mixed that up with a sci-fi techno-thriller, splitting the action between interleaved, branching past and near-future storylines and bringing bots and drones into the mix.  Black Ops 3’s focuses entirely on the sci-fi stuff, loses most of its conspiracy theory trappings and brings augmented super-soldiers in. The result sometimes feels less like a third Black Ops game than Call of Duty: Even More Advanced Warfare. It leaves you wondering whether it’s time Call of Duty looked back to the past for inspiration. 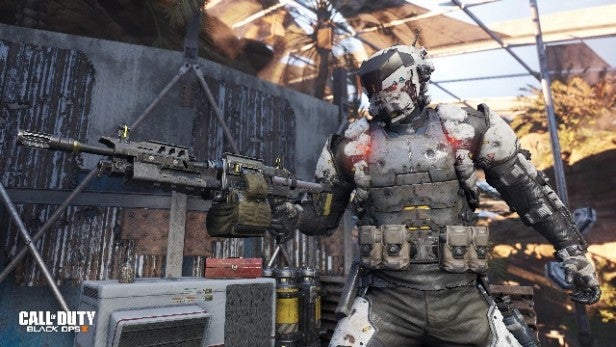 It’s not that the sci-fi stuff isn’t cool. Just as Advanced Warfare’s exosuits shook up the tired Modern Warfare-style formula, so Black Ops 3’s various cyber-core abilities add some much-needed punch to this game. They’re divided into three types, Martial, Chaos and Control, only one of which is available in any mission load-out.

Broadly speaking, Martial capabilities give you speed and enhanced melee attacks, transforming you into a whirling dervish of destruction on the battlefield. Control capabilities allow you to disrupt or hack bots and turrets, either weakening them, bringing them to your side or putting them under your direct control.

And the Chaos capabilities? These allow you to wreck bots and turrets remotely, but also disrupt the enemy at range or whittle down their numbers when they threaten to overwhelm you. Between a power that transforms enemy bots into walking grenades and one that sends out swarms of lethal nano-drones, the Chaos core can be incredibly useful in the early stages of the main campaign. 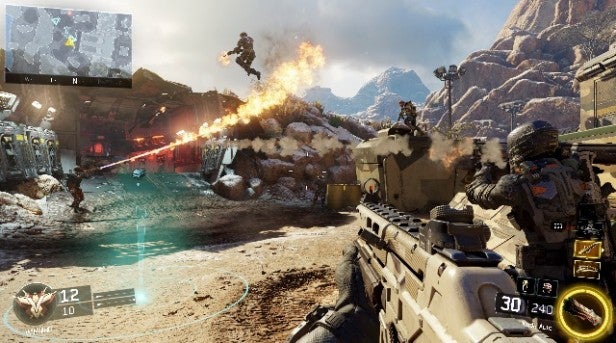 There are times in Black Ops 3’s campaign where level design, atmosphere and your new cybernetic powers come together in an explosion of general awesomeness.

You’re barreling through corridors full of military bots, tugging the energy core from one and hurling it grenade-like at another, chuckling as it blows on impact. You’re leaping down from rooftops into gangs of enemy soldiers, smashing some into the scenery, surging through others like a tidal wave. I had a fantastic time taking over flying drones and roving turrets, slaughtering the snipers lying in wait for me and mowing down grunts by the half-dozen.

And while this is still very much a restrictive, heavily orchestrated shooter – at one point, my progress was temporarily barred by a chainlink gate – it does open out at times. When it does, we get Halo-like bubbles of combat where you can try out different tactics or make the most of your current cyber-core. Black Ops 3’s campaign has been designed for both solo and co-op play and it’s best when it delivers spaces where four players and any CPU-controlled buddies can tear things up, vying to out-do each other with feats of marksmanship and cybernetic warfare.

It doesn’t hurt that movement also benefits, with Titanfall-style wall-running and ledge-grabbing manoeuvres now added to the repertory of jumps, mantles, dives and slides. 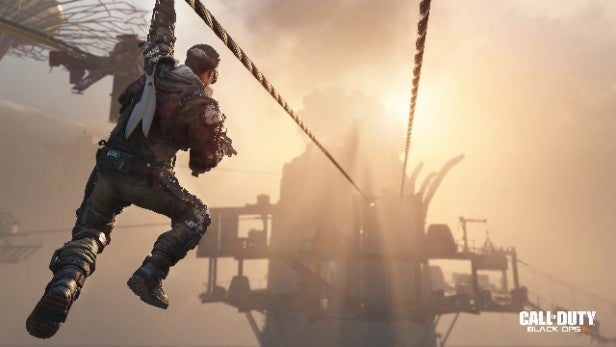 The campaign itself is nothing short of bonkers, with sections that owe more to Dead Space, Crysis 2, the movie Source Code or Deus Ex than any normal Call of Duty game.

You also can’t fault Treyarch on the grounds of set-pieces or scale. This is a game where giant waves rip through flooded city streets, vast structures come crushing down around you, underground bases are drowned by the seas while you’re in them and you’re expected to navigate a series of towers while they’re burning or collapsing – and sometimes both at the same time.

It has some fantastic exotic locations in Egypt and Singapore, and some wonderfully destructive weapons – who can’t love a gun that launches giant spikes which explode on demand? You’d struggle to find a game that delivers more bangs for your buck without becoming an end-to-end cacophony of bangs.

This is also a great-looking Call of Duty. Real effort has gone into the production, architecture and character design, and when you combine the sci-fi scenery, the Far-East and Middle-East locations and the lavish use of colourful dynamic lighting you get the most vibrant Call of Duty since, well, ever. Sure, we’re not short of the standard browns and greys, but when I look back on Black Ops 3 I’ll remember its explosions of blues, greens, crimsons and blinding whites. 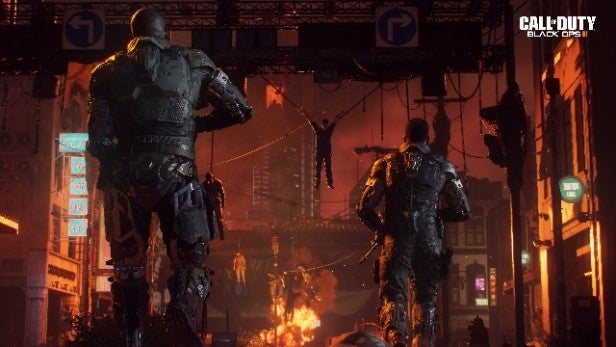 Yet, throughout the campaign, Treyarch seems hell-bent on messing up all its good work, struggling with the pacing, consistency and flow. Some sections are plain awful, Call of Duty-by-the-numbers efforts that can’t be elevated by any cyber-powered twist. The whole first level is probably the worst and most tedious I’ve encountered in any recent CoD. All too often scale and bombast is mistaken for ambition, resulting in moments of what should be amazing spectacle that have curiously no impact whatsoever.

Meanwhile, bots and heavily-armoured troops become boring bullet-sponges, and there are long sections where you’re facing so many enemies from so many different directions that the action just becomes confusing and weirdly monotonous.

Who exactly is sniping you from where? Why does stepping one foot in that direction result in insta-death? Can anyone just turn down the noise?

Augmented vision can help you locate enemies and avoid incoming grenades, but it’s annoying that Black Ops 3 only gets really challenging when you die, respawn, get blasted to kingdom come in seconds, then respawn again. Hit a bad spot and this happens over and over again until you hit a lucky streak. 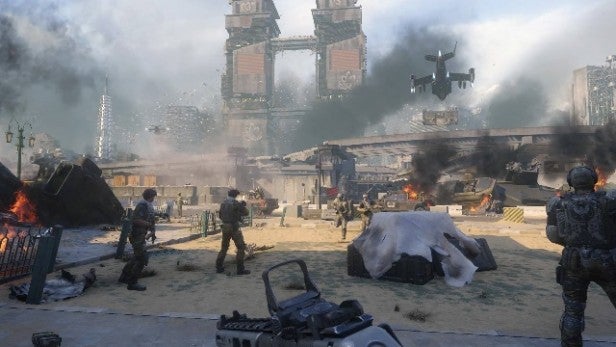 Nor does it help that the plot varies between predictable, clichéd variations on established themes and sections so weird and incomprehensible that you’ll be baffled as to what Treyarch were thinking. Wouldn’t it be great to have a CoD where we’re not betrayed by a mentor figure or close ally? Why are there so many different factions with so many different acronyms? What on Earth is going on?

Meanwhile, the script is borderline hilarious for all the wrong reasons. Seriously. If it wasn’t for the horrors of THQ’s Homefront, I wouldn’t have heard dialogue this over-ripe since Team America: World Police. In fact, that’s where the actors seem to have taken their inspiration, seemingly competing to deliver each line with more OTT macho vim and vigour than the line preceding. It’s risible stuff.

On balance, this isn’t the worst CoD campaign – Ghosts, CoD3 and Modern Warfare 3 are still tussling over that one – but it’s certainly not up there with Modern Warfare, Black Ops or Advanced Warfare. There are ideas and enthusiasm at work here, plus some superb visual design, but not enough attention to detail or control. 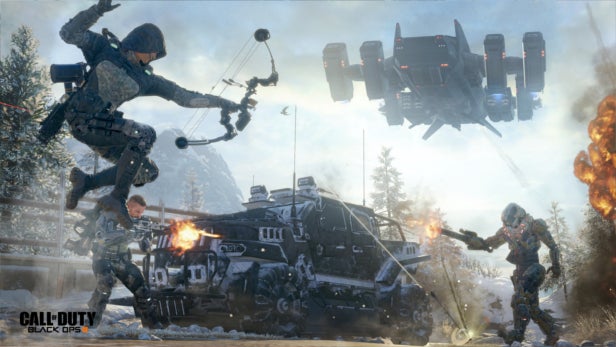 Luckily, this isn’t the be-all and end-all of Black Ops 3. For a start, the multiplayer is the strongest it’s been in years, with clean, good-looking, thoroughly polished maps, a great set of weapons and killstreaks that are powerful without being teeth-grindingly annoying. The new movement options actually add to the flow of gameplay, while giving the most skilled players new ways to show off their murderous prowess. In its Hardpoint and Confirmed Kill modes it has what I believe to be the most enjoyable competitive twitch shooter experiences around, partly because both modes discourage cheap, cowardly custard camp and snipe behaviour and push a more open, active style of play.

While it’s easy to overstate the significance of the new Specialist roles, these add a new colour and variety to the action. Each Specialist comes with a signature ability or weapon, doled out as a reward for good play. New specialists unlock as you level up, and whether you’re fighting with the Outrider and her radar-like vision and compound bow or as Prophet with his glitch, backtrack move and arcing, kill-chaining electrified bolt-launcher, there’s a real pleasure in seeing the prompt come up, unleashing your specialist weapon and grabbing a signature kill. Plus, you’re free to customize and level up your specialists just as you can everyone else.

Related: Xbox One backwards compatibility – Can I play Xbox 360 games on Xbox One? 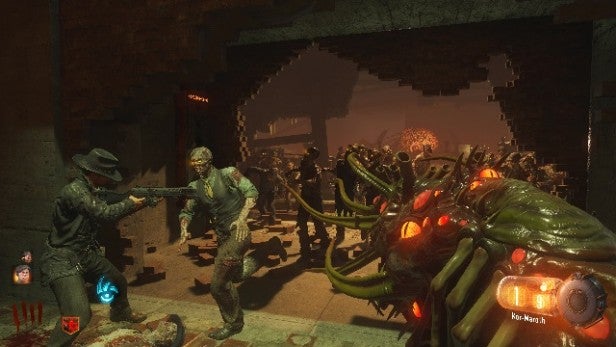 Zombies mode also makes a welcome return, and while it’s not my favourite variation on the wave-based, co-op horde mode, it’s never looked or played better than it does here. Treyarch has gone for a 1940’s film noir feel, with great voicework from Jeff Goldblum and Ron Pearlman, a jazzy score and four protagonists covering familiar boxer/gumshoe/showgirl clichés. With objectives drip-fed in by a mysterious figure, there’s a distinctive HP Lovecraft vibe, which only becomes more obvious when you see some of the power-ups and enemies involved. It’s no Left4Dead, but there’s more to this one than repairing barriers and blasting a bunch of shambling brain-munchers in the head. Plus, the neon-lit city setting wouldn’t have disgraced a next-gen Bioshock game.

What’s more, while the campaign as a whole is far from perfect, you’re free to return to your favourite missions in co-op campaign mode and switch the difficulty, chase down trophy-like accolades and even try different load-outs on for size.

Grab some friends and it’s a hoot, as you forget all about the storyline, whatever that is, and simply focus on creating as much mayhem as humanly possible. The game actively encourages this approach, enabling you to unlock all the missions from the off.

Long-term, this might be a more rewarding way to play Black Ops 3 than slogging through it level by level. Throw in the Freerun race mode, where you can sprint, double-jump, slide and wall-run through a series of timed levels, plus a secondary, VR-styled horde mode where you battle virtual bots in stripped back arenas, and there’s no way you can complain about a lack of content. Black Ops III is practically bursting with the stuff.

Verdict
How you feel about Black Ops 3 as a package will depend on what you’re looking for in a shooter. If your focus is on competitive play, then this will be your favourite CoD of recent years. If you and your mates love to smash things up in co-op, Black Ops III gives you plenty of opportunity, so get stuck in. Yet it’s hard to escape the nagging feeling that this would have been a better CoD had Treyarch focused less on the co-op and the extras, and a little more on delivering their best CoD campaign to date.

When it’s good, Black Ops 3 is very, very good. When it’s not, it’s rather disappointing.