This is Asus’ first 802.11ac wireless router. While Asus is primarily known for its laptops, tablets and smartphones the company has also been carving out a niche for itself in the router market. Performance has been at the forefront of its success and consequently our expectations for the AC66U are high. 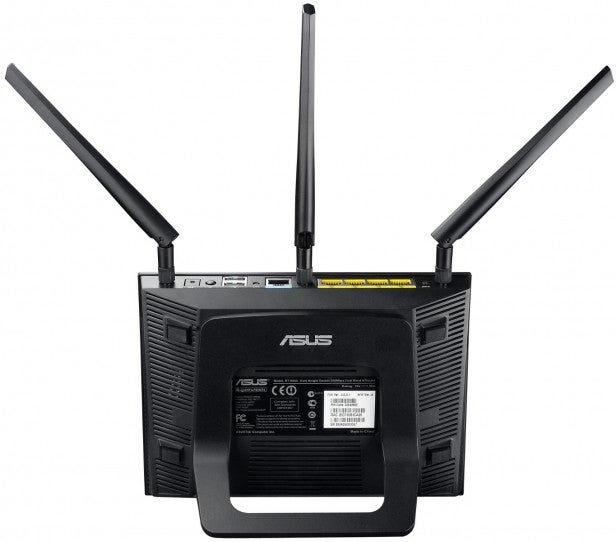 The look of the AC66U can be described in just one word: imposing. This impression is given by the router’s three optional (and upgradeable) external antennas and its sharp angular design. Both elements fly in the face of recent router trends that veer towards internal antennas and smooth, curved finishes. As such the AC66U won’t subtly fade into the background of a room, but it will sit there declaring that it means business.

Asus continues to break trends elsewhere too. The usual plain matt and gloss finishes of most routers has been replaced by a textured tartan on the AC66U’s main body and the tendency to minimise flashing lights is spun on its head with the router featuring no less than nine separate blinking status indicators. There are (from left to right) power and activity lights for four Ethernet ports, Internet, 2.4GHz and 5GHz WiFi and USB.

Like all routers the AC66U is constructed from plastic so it won’t hinder wireless signal, but is well made and feels durable. The antennas also mean the router has flexible positioning, it is wall mountable and comes with a stand that lets it rest on its front edge to lift up those antennas even higher. 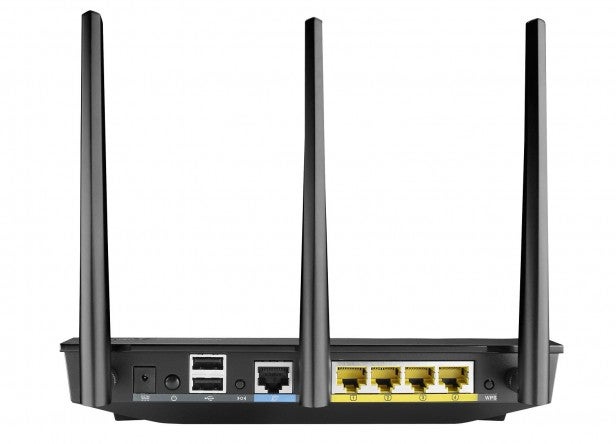 While the antennas bring positional flexibility, one of the most interesting aspects to the AC66U is its functional flexibility since it can work as a router, wireless bridge and wireless access point. Of course the price for bridges (to bring wireless connectivity to wired devices) and access points (to extend wireless signal) are much cheaper than the AC66U, but it gives the router a welcome second life when you upgrade in the future.

But the real draw is the AC66U’s 802.11ac functionality and like other wireless ac routers it is also backwards compatible with 802.11a/b/g/n and offers dual band 2.4GHz and 5GHz wireless n signals – all of which are bolstered by those three large antennas.

You’ll also find 4x Gigabit (10/100/1000) Ethernet ports as is standard these days on any premium router (though we continue to cry out for more) and two USB ports for sharing printers and storage over a network. It is perhaps surprising to see Asus not include a USB 3.0 port like the D-Link DIR-868L or Linksys EA6700, but USB network performance has yet to test the bottleneck of the USB 2.0 standard in any case so it tends to be more for superficial bragging rights.

Internally, the AC66U ticks all the boxes: WPA/WPA2 wireless encryption, parental controls, UPnP, IPv6 support, traffic prioritisation, guest access, QoS and WPS. Curiously, though, for all the blinking activity lights on the router, there isn’t one for WPS, which is frustrating as you can’t see how long it is running when trying to connect to other devices.

Asus has yet to go down the D-Link/Linksys route of providing a full Cloud platform like SmartWiFi and mydlink, but it does offer a halfway house via a smartphone app. AiCloud lets users remotely access audio and video on their network and can be tied in with the the company’s WebStorage Dropbox-a-like service. The combination doesn’t add up to the power and flexibility of its rival’s offerings, but we would expect Asus to fold them into a more complete offering before too long. 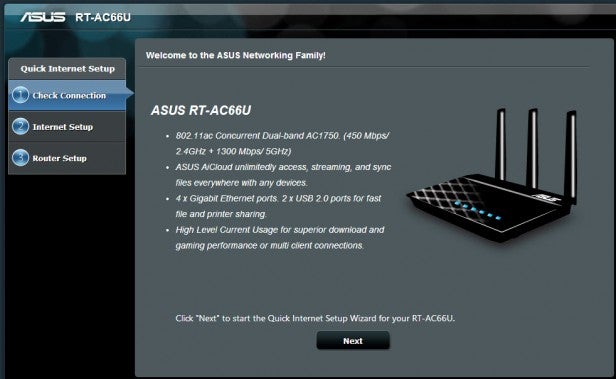 While most router setups are slick these days Asus deserves great credit for making the AC66U one of the most enjoyable. Again this is because it bucks a trend.

Unlike rivals, the AC66U doesn’t encrypt its wireless signals by default so you connect without a password. Once you do this, however, your default browser automatically loads the router’s setup page where it walks you through setting Wi-Fi and router passwords and the SSID (router ID). This is clever because it means there is no need to print a key on the bottom of the router and everyone must choose their own password.