What is the Blaze Tab?

Simply put, the Blaze Tab is an Android tablet with built-in physical gaming controls. It’s powered by a Rockchip RK-3188 chipset, has a 7-inch capacitive touchscreen and 16GB of internal storage, as well as a MicroSD card slot and 0.3 megapixel front-facing camera.

With Android 4.4.4 on-board, it’s capable of running all your typical Android apps, but the dual analogue sticks, D-Pad, buttons and shoulder triggers mean that you can play a whole host of games with “proper” controls. There’s even a HDMI socket so you can link it up to the TV. 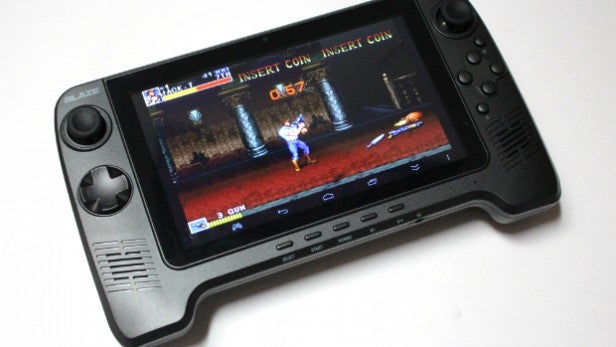 From the spec sheet the Blaze Tab sounds like pretty much any Android tablet you can name, but the key difference is the physical controls to the left and right of the 7-inch 1024 x 600p screen. These consist of two analogue sticks, a circular D-pad and six face buttons. Along the bottom of the screen there are five additional buttons which are in charge of things like power and volume, while on the top edge there are two shoulder triggers and two shoulder buttons.

The upper section of the Blaze Tab is also home to the MicroSD card slot, HDMI-out socket, Micro USB port and power connector – despite the presence of a dedicated PSU in the box, you can still charge the system via its USB port. On the bottom of the Blaze Tab you’ll find the 3.5mm headphone socket, and on the front are two speakers situated below the aforementioned physical controls.

On the back of the unit there are two bulbous sections on the left and right side which are intended to provide something to grip onto when in use. They certainly make it easier to game on, but they drastically inflate the bulk of the tablet, making it significantly less portable than your typical Android slate. 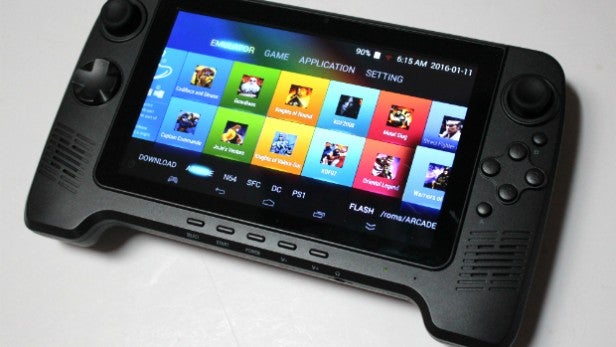 On the whole, the design is functional and inoffensive, but it’s not constructed to the highest of  standards. The casing is entirely plastic and feels cheap. When the screen is on, it’s possible to see light emanating from the joins in the casing, which adds to the feeling that this is a very lazily-manufactured unit – something you could argue should be evident from the low price point.

The gaming controls are something of a mixed bag too; the analogue sticks are decent enough and the face buttons are clicky and responsive, but the D-pad is borderline unusable, regularly failing to detect quick changes in movement. It’s also difficult to pull off diagonal commands with the pad.

It is also clear that the Blaze Tab was designed with the dual analogue sticks as the primary interface choice, as it’s impossible to reach the left-hand shoulder buttons when you’re using the D-pad. The distance your fingers are expected to cover is simply too great, unless you’re blessed with the digits of Street Fighter II’s Dhalsim.

The Blaze Tab’s screen is quite low-resolution when you consider its size, and viewing angles are poor. Tilt the device away from yourself and the image appears to invert, a common issue with low-quality LCD screens. The plastic panel which covers the screen also lacks any kind of protective coating and picks up marks and scratches with unnerving ease. You might want to invest in some kind of case or sleeve if you intend to carry it around with you. 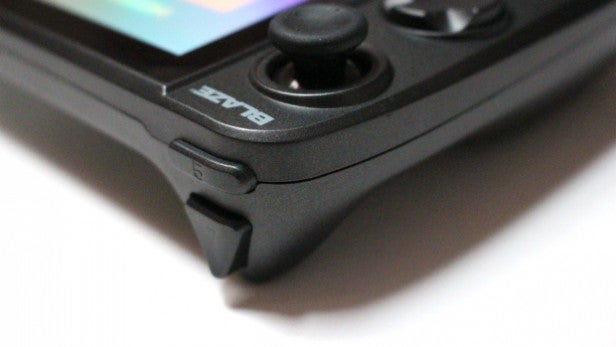 The Blaze Tab runs Android 4.4.4, which puts it a few updates behind the latest version of Google’s OS, Marshmallow. That doesn’t create too many problems at the moment as most apps are designed to run happily on 4.4 or better, but in the future you can expect to see the Blaze Tab get left behind as developers abandon support for older versions of Android.

The device uses the same UI skin we saw on the GPD XD, which neatly organises elements to make it easier to navigate with a physical controller.

A dedicated emulation section leaves you in no doubt of the main selling point of the unit – its ability to play retro games – but it also comes pre-loaded with 3D Android titles like Shadowgun, Riptide GP 2 and Virtua Tennis, all of which offer support for physical controls.

Naturally, because this is Android we’re talking about, you can access the Google Play store and download all your favourite apps, including YouTube, Twitter, Facebook and Gmail. If you want to use the Blaze Tab as a tablet you can as well – and that gives it a big advantage over dedicated gaming systems, like the Nintendo 3DS and Sony PS Vita. 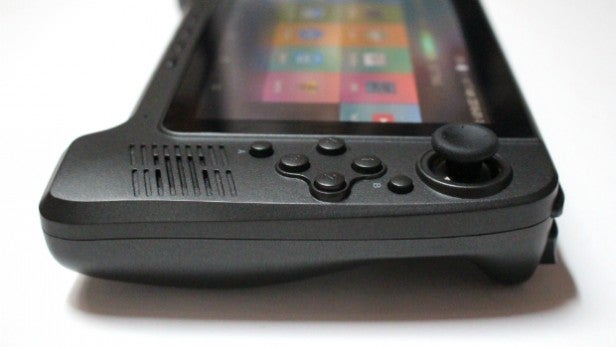 Emulation is clearly a massive part of the Blaze Tab’s appeal, and it even comes pre-loaded with several emulators and a handful of ROMs. You can obtain more games via another pre-installed app, but it’s relatively easy to find ROM-sharing sites online – despite the legally-questionable nature of such activity.

The Blaze Tab isn’t the first Android device to focus on playing old games – we’ve already had the likes of the JXD S7800B and GPD XD – and its performance is roughly on par with both of those examples. 8-bit and 16-bit systems are replicated almost faultlessly, and it will even play arcade, N64, Game Boy Advance, PlayStation and Dreamcast games.

We did notice a few instances where games refused to load or crashed, but we installed other emulators from the Google Play market and they ran perfectly, so that could be an issue with the pre-loaded apps rather than the hardware.

If you’re into retro games, such functionality will make the Blaze Tab incredibly alluring. You can load up the entire library of some consoles and have them on-hand whenever you feel like delving into video gaming’s colourful past; being able to connect the unit to a TV is another bonus, which effectively turns the Blaze Tab into a fully-fledged home console. However, it’s worth noting that there are other devices out there that do the job better, but cost more. 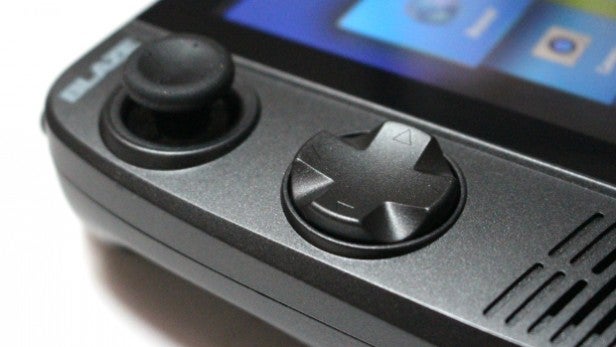 There’s 16GB of storage inside the Blaze Tab, of which around 10.6GB is available to the end user. The MicroSD card slot allows you to expand this, and accepts cards of up to 32GB in capacity. That should be more than enough if you intend to make the most of the unit’s emulation capabilities, but if you’re downloading full-blown Android games then you might find yourself struggling for space after a short period of time.

The 5000mAh battery takes some time to fully charge, but it has excellent stand-by stamina and hardly loses any charge when the console is turned off or idle. Even so, the size of the display means that it sucks juice at quite an alarming rate – expect to have to plug the device in every day or so, depending on your overall usage. Running more demanding apps – such as PlayStation or Dreamcast emulators and 3D Android games – will drain the power faster than 8 and 16-bit emulation. 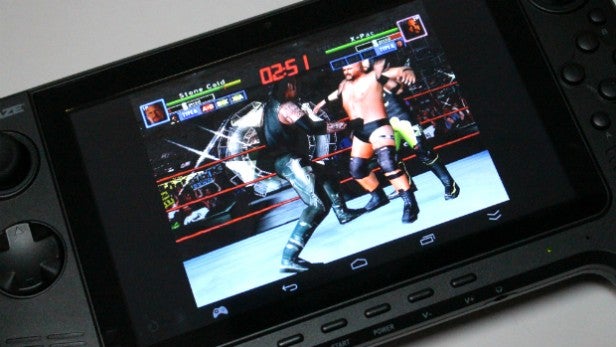 Should I buy the Blaze Tab?

The Blaze Tab isn’t the first Android tablet to come with physical gaming controls and emulation as its two key selling points – we’ve already had numerous examples which provide just as decent an experience. However, what the Blaze Tab does have in its favour is price; £99 for a tablet with a gaming interface is good value for money, and this goes a long way to atoning for its shortcomings – which include a ropey D-Pad, poor screen and outdated Android software.

If you’re deadly serious about retro gaming on the go then you’re better off looking at alternatives, such as the ultra-powerful Nvidia Shield Tablet K1 or the 3DS-like GPD XD. However, both of these cost more than Blaze’s offering, so if you’re after a cheap way of reconnecting with gaming’s past – or you seek a budget gaming device for a younger member of the family – then the Blaze Tab begins to make a little more sense.

The Blaze Tab commits a multitude of sins, but the low cost means that it’s an acceptable entry-level device for less-demanding gamers