In terms of pure bang for your buck the £250 Monitor Audio i-deck 200 offers arguably the best dock audio experience on the market. Following comments on the back of this review, however, another contender was suggested: Audyssey’s colourfully named South of Market. Having now put the dock through its paces it is clear you readers know your stuff.

On the surface, the South of Market dock is an intriguing concept. Unlike traditional docks, Audyssey has designed South of Market (named after a San Francisco neighbourhood) to be a multipurpose product doubling as both a dock and PC/laptop speakers. Given most docks have 3.5mm auxiliary outputs (the NAD Viso 1 excluded) this seems a weak boast, but South of Market also connects directly to a computer’s USB port so docked devices can sync with iTunes. In addition its unusual shape makes it more practical to position alongside a monitor. 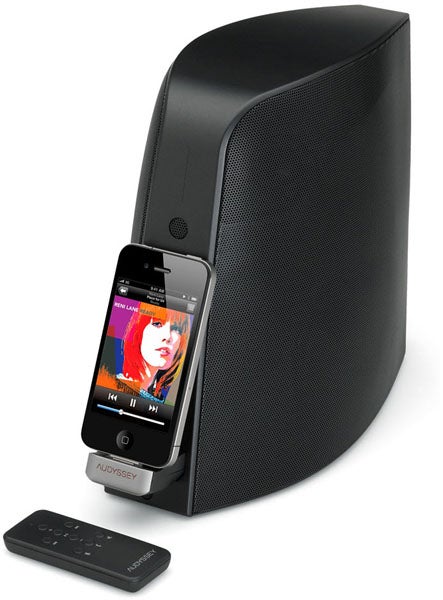 This shape is worthy of further discussion. Looking somewhat like a curvy version of the CoolerMaster CM 690 II PC case, it has dimensions of 23 x 28 x 13 cm (H x D x W) making for a narrow, but deep, form factor with a small footprint. At 4.1Kg it is also relatively light, though packs no internal battery or carry handle for easy portability. This is a dock designed to be have a permanent mooring position. On the plus side Audyssey has managed to squeeze the transformer inside the dock meaning there is no leaden power brick on the cable.

Beyond simple differentiation, however, the shape of the Audyssey South of Market dock is fundamental to its audio performance. Taking a leaf from the Arcam rCube, Audyssey has positioned its speakers at opposing angles on each side of the dock to create the widest possible stereo separation.

Separation is a near constant problem for docks. Their small dimensions mean speakers have to sit close together and this is compounded by positioning them in the same direction. In the worst examples this can create a near-mono experience. So does Audyssey’s approach work? More later. 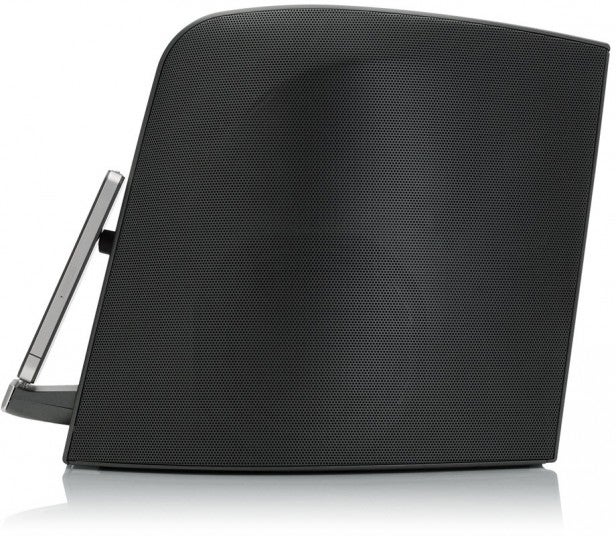 As for build quality, Audyssey has done a superb job. It ignores the fad for glossy piano black, a famed fingerprint magnet, and instead combines metal-grilled speakers with a tasteful matt grey finish which should keep the dust away. A touch sensitive play/pause button lights up when the dock is powered on with a volume rocker and mute button on the dock connector itself.

The connector is not spring loaded like that on the i-deck 200, Zeppelin Air or Logitech UE Air, but its design does mean it can comfortably fit any Apple device, including an iPad. Meanwhile volume is represented by a vertical white LED bar, which is again only visible when the device is switched on. This is a nice twist and a welcome feature since many docks have no volume indication whatsoever.

And what about wireless connectivity in the Audyssey South of Market ? These days it is hard to release a dock without it. The routes typically taken are either AirPlay (expensive, Apple-limited, but lossless) or Bluetooth (lossy, but ubiquitous). Audyssey has opted for the latter along with the ubiquitous Bluetooth A2DP profile. Pairing couldn’t be easier: press and hold the dedicated Bluetooth button at the rear of the dock to put it into pairing mode, connect with your phone and enter the default passcode (0000).

There is one further interesting connectivity option: a 3.5mm microphone output. This follows on from the dock’s genuine PC speaker replacement aspirations and will be a boon to regular users of VoIP services like Skype. 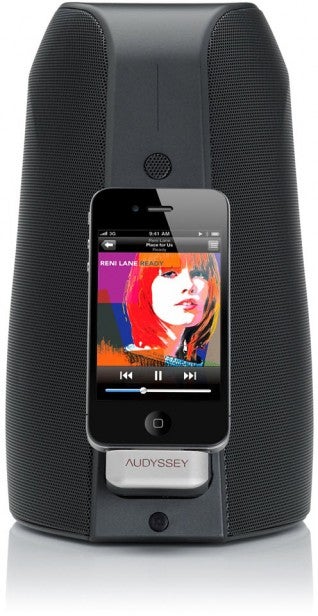 So how does it all sound? Very impressive. Given its compact shape what impressed us most is the scale of the sound reproduction. Audyssey has equipped the South of Market with two 0.75in tweeters, two 4in woofers and four discrete amplifiers. The result is a potentially monstrous total output of 200 watts, considerably more than any dock we have tested (the Zeppelin Air was top with 160W). Much like megapixels, watts do not tell the whole story though and we’d be hard pushed to say the Audyssey South of Market is any louder than Bowers and Wilkins opus.

That said, Audyssey has produced a genuine window-shaker and one that marries detail and subtlety with full party cred. It is genre neutral too, being as comfortable with classical music as hip hop or heavy metal and audio integrity holds together even at maximum volume – a level listeners are more likely to shy away from than the dock itself. 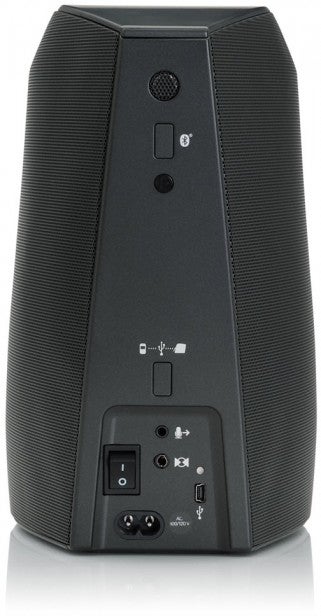 The secret sauce in all of this is Audyssey’s aforementioned decision to position the speakers at opposite angles. This allows the dock to create a far wider sense of stereo separation than is usually experienced on docks and prevents it from becoming a monotone boneshaker. Happily Audyssey backs this up with plenty of midrange, which gives the South of Market the backup to project tracks with plenty of depth.

Caveats? If anything the South of Market can have a little too much bass at high volumes, but it doesn’t smother the music and, chances are, at this level you’re looking for the party atmosphere this brings. Aside from this, sound reproduction over Bluetooth is competent rather than special. It won’t alienate the casual listener, but would benefit from the inclusion of aptX which made the NAD Viso 1‘s Bluetooth performance so exceptional.

We think Bluetooth with aptX as well as AirPlay is the way forward for premium docks hoping to serve all handsets. Many Android handsets are aptX compatible as are Macs, but iOS devices have yet to follow.

These issues aside there are a number of thoughtful elements Audyssey has implemented in the South of Market that should be highlighted. The first is the remote control, which complements the standard playback controls with the ability to answer VoIP calls and mute an attached microphone.

The second is a dedicated app. Audyssey follows the lead of an increasing number of dock makers in offering a free iOS app, but allows greater customisation. The app enables management of dynamic volume controls (whether to automatically even out volume levels or not), adjustment of bass, treble and tilt (more lows or highs) and the creation of custom EQs. The beauty of these options is whatever your preferred sound signature, the app provides the tools to create it. 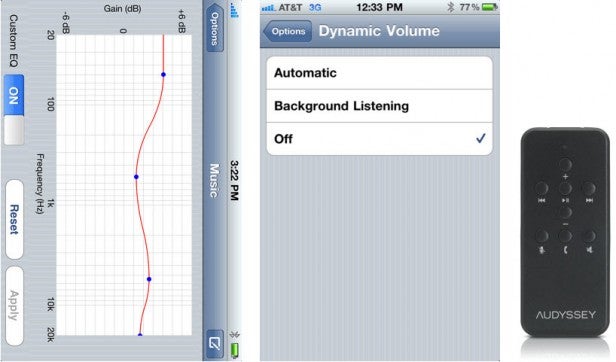 All of which brings us to cost. At £299.95 Audyssey has priced the South of Market well. It does mean Monitor Audio’s £250 i-deck 200 remains the dock of choice for the audiophile on a budget (it still has a fractional edge on audio performance), but it lacks this dock’s flexibility and practicality.

A bigger question would be to compare it with the £299 Logitech UE Air, which does include AirPlay. But we would give Audyssey the nod, despite the absence of AirPlay, as audio performance is superior and there is greater functionality on offer. Harder to answer is whether an additional £50 isn’t better spent on the Arcam rCube, a sonic match, equally flexible and battery powered. Regardless, Audyssey’s South of Market is superb. 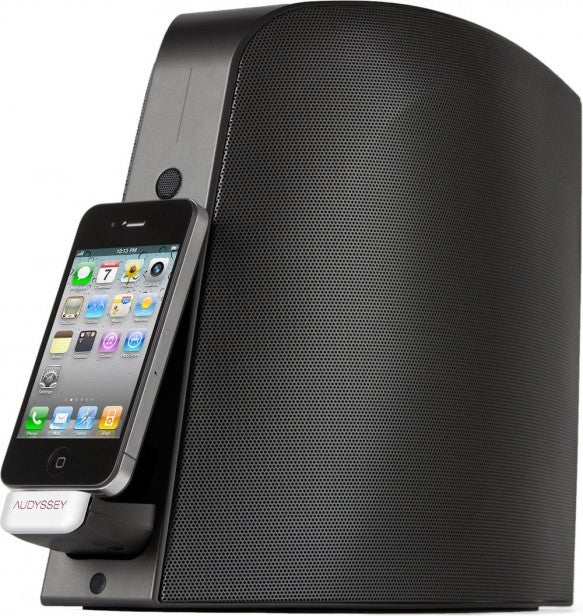 ”’Verdict”’
It may have a crazy name, but the Audyssey South of Market dock is a wonderful combination of innovative design, practical flexibility and sonic prowess. It is one of the few docks to offer a genuine sense of stereo separation and its ability to replace both your old dock and your PC speakers makes the £299 asking price alluring. The absence of AirPlay and aptX for Bluetooth hamper its wireless credentials and we’d love to see a version with an integrated battery, but at its price point this is our new favourite dock.