The Logitech UE Air AirPlay Speaker is a strangely branded item. For a start it carries both the Logitech and Ultimate Ears brands, the latter of which has not made a dock before. Secondly it is being promoted as a speaker when it is actually fitted with an Apple dock connector. None of which matters when forces come together like this…

Design
The first thing to say about the Air is it is clearly a labour of love for both companies. Apart from a few iconic exceptions like the Bowers & Wilkins Zeppelin and Arcam rCube most docks have become variants on a shell/rugby ball theme, but the Air is far more graceful than that. Shaped like a single curved wing, the Air gives the pleasant sense of being familiar but new. If Batman owned a dock, it would be this one.

The Caped Crusader may be tempted to take the Air with him as well since it lives up to its name by weighing just 2.81Kg and measuring only 506 x 152 x 140mm, making it one of the lightest premium docks we’ve tested. Unfortunately he wouldn’t be able to use it on the move since the Air is mains powered only, but it remains easy to shift from room to room in Wayne Manor.

Build quality is good too. An aesthetically pleasing mix of minimal piano black on the top and front slide out dock connector, a matt rear finish (with clear smiley face) to keep away the dust and the dominating material grill covering the front speaker. Those who like to remove their speaker grills should note the Air’s is fixed.

Look at that smile…

That shouldn’t be a deal breaker, however, as working itself further into our affections is the smart dock. Hidden away when not in use, the connector slides out with a simple press and, unlike much of the competition, it can hold an iPad. It is spring loaded like the excellent connector on the Monitor Audio i-deck 200, which protects both dock and device on connection and disconnection.

Also winning hearts and minds are the tasteful metal dock controls. Minimalism is the order of the day with a large volume wheel flanked by a mute button and a power switch, which doubles up as a source selector with short presses. The obvious question is where are the playback controls, especially since Logitech is a little stingy in not bundling a remote. The answer lies in the ‘Air’ moniker since the dock has AirPlay built in. This does leave users without Apple products stuck controlling music with their devices (Android users can look to AirSync, but we suspect Logitech isn’t targeting this sector given the effort it has spent on its AirPlay integration…

Setting up AirPlay on the Logitech UE Air is unlike anything we have seen before and we hope it will be the model for all docks going forward. Plug your Apple device into the dock connector and it prompts you to install the UE Air app. Open this and the dock is detected, along with the Wi-Fi network you are using. Type the network’s password into the app, this is sent to the dock and you’re done. We did have some quirks getting the app to recognise our D-Link DIR-645 SmartBeam router, but it worked without a hitch on others so we suspect this will be ironed out in a future app update.

As for the app itself, it doesn’t offer the level of acoustic control seen in the app for the Libratone Live, but there is bass and treble adjustment. Setup is slightly more involved with a PC as you have to connect to the Air’s dedicated Wi-Fi (part of the AirPlay spec) and direct your browser to an internal IP address (192.168.1.12), but from there it is also a simple case of following the onscreen instructions. Rivals take note.

Sound quality
A combination of factors had us worried about the dock’s sound quality. Logitech and UE have not made a premium dock before and both companies took a leaf out of Bose’s book neglecting to divulge any concrete specifications other than it has a 2.0 speaker arrangement with “dual tweeters and woofers”. Happily those fears were unfounded.

The Air is not the best dock we’ve heard, but it is extremely competent. Most admirable is its balance between bass and midrange. Many docks sacrifice the midrange believing the detail provided by the treble and the power provided by the bass can mask the shortcomings in the depth of sound the midrange gives. As a result the Air has a scale of sound that belies its lightweight proportions. Output doesn’t match powerhouses like the Zeppelin Air (150W), Libratone Live (150W) and i-deck 200 (140W), but it will fill a living room or entertain a moderately boisterous house party.

Where the shortcomings lie are at maximum volume where the dock loses some composure and detail and on particularly bass heavy tracks where the lack of a dedicated bass driver sees it come up short, reducing drive and emotion. There is also the common problem of sound separation that affects most docks (the speakers are too close together to generate a full stereo effect), but it isn’t as troubling as it was on the mono-esque Klipsch G-17 for example.

Value
Which brings us to the question of value. At £299.99 the Logitech UE Air is a mid-range price for a premium dock, which is exactly where its audio performance deserves to be. Spend £50 more and the Arcam rCube still has its number (and a built in battery), spend £50 less and the exceptional Monitor Audio i-deck 200 (once £400) will still take it to the cleaners sonically but lacks any form of wireless connectivity. 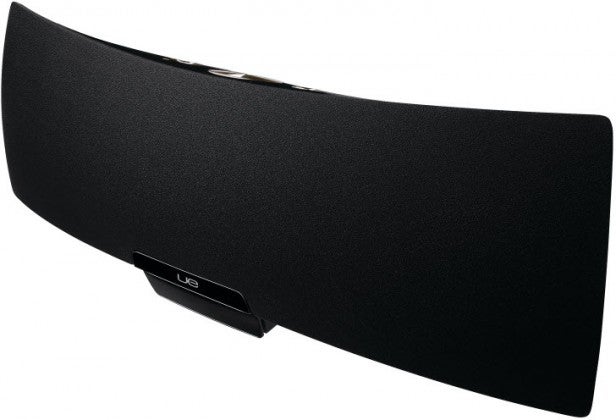 As such whether you opt for the Air will depend entirely on your priorities. Those with the cashflow will continue to opt for the bombastic Zeppelin Air or Libratone Live, those requiring true portability will go for the rCube and those looking purely for the best audio performance bang for their buck will choose the i-deck 200. In the middle sits the Logitech UE Air doing a solid job of everything and looking fantastic. We suspect it will find an audience – it deserves to.

”’Verdict”’
For a first dalliance into the cutthroat world of premium docks Logitech and Ultimate Ears should be commended. The Air performs well, is beautifully designed, well made and comes with AirPlay at a reasonable price. Competitors can be found to best the Air sonically in its price bracket, but as a complete package it is a compelling proposition.