You want a premium speaker for your iPhone, you want it from a premium brand and you want AirPlay? Step forward Klipsch with nearly 70 years of acclaimed audio history and its £429 Gallery G-17 Air speakers with integrated AirPlay. If only it were that simple…

The Gallery G-17 is Klipsch’s first dalliance into the expensive world of Apple AirPlay systems and it is immediately out to make an impression. How it achieves this is by daring to be different. The G-17 breaks from the usual rounded rugby ball/shell-like designs that swamp the market, with a retro 80s-esque rectangular design atop a detachable stand.

Klipsch G-17 soundbar not for you? Check out our round up of the best soundbars to buy

Build materials are an interesting contrast. The speaker itself walks the well worn path of piano black plastics and dares to expose its speakers, a raw look we think more manufacturers should choose. Klipsch does supply a simple material grill, which cleverly attaches with magnets, but one look at Klipsch’s marketing materials will tell you leaving them exposed is its preferred look. In contrast the G-17’s stand is metal, surprisingly heavy and dares to step back into a time when you connected things using screws.

Together speaker and stand weigh just 3.5Kg, and the stand accounts for 800g of that. The Klipsch Gallery G-17 doesn’t have an internal battery so isn’t portable in the strictest sense, but it is light enough to carry from room to room and measures just 43.2cm long, 14.4cm tall and 10.1cm deep (17.78cm tall with the stand) so it is relatively small even if the actual footprint isn’t quite so petite.

In terms of connectivity the G-17 ticks the right boxes. In addition to AirPlay, there’s a 3.5mm auxiliary input should you dare to own a device outside the Apple clan, and USB for digital input from an iPod or iPhone (firmware updates come via Wi-Fi). Despite this the headliner remains AirPlay.

Setting up AirPlay has been complex and problematic in the past, but recent devices have made it a doddle. The G-17 falls somewhere in the middle. Setting it up on a computer still requires web browsers and the entering of IP addresses, but any iOS device can download the ‘Klipsch Air’ app and be done in five relatively painless steps.

The Klipsch Gallery G-17 app could be better, the Libratone Live app doubled as a remote control, graphic equaliser and positional assistant, but Klipsch Air is merely for setup, tips, Klipsch news, the company’s Twitter feed and some promotional marketing.

Hopefully functionality will improve in time. What could also be improved is the speed with which the G-17 enables AirPlay. Each time it is switched on it goes through a 25 second setup process where speaker’s AirPlay symbol flashes, and you can only connect once this completes. Unless you plan to keep the speaker switched on all the time this is a frustrating delay for someone looking to quickly switch their output source. While this is common to all early AirPlay docks, it seems sluggish in 2012 now that we’ve experienced faster docks like the Logitech UE Air. 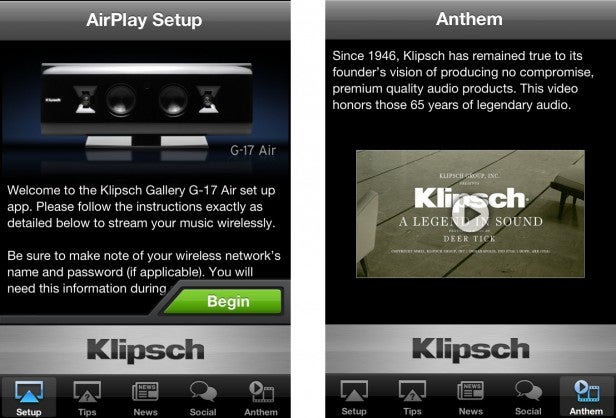 So can the G-17 punch above it weight? Raw specifications would suggest Klipsch has given it an uphill battle. Unlike most premium models (the ill-fated Loewe Soundbox and House of Marley Bag of Sound aside) the G-17 scraps the usual 2.1 or 2.2 speakers and bass arrangement in favour of a 2.0 setup.

Space is no doubt a factor here and as such bass-reflex (essentially vibration created inside the enclosure) is used instead. Unsurprisingly overall wattage isn’t going to touch larger premium docks such as the Monitor Audio i-deck 200 (140W) or Bowers & Wilkins Zeppelin Air (150W) either with the smaller G-17 mustering 60W via 2x 20W woofers and 2x 10W tweeters.

This makes for something of a David verses Goliath scenario and sadly there is no giant slaying here. Volume isn’t really the primary issue, and the Klipsch Gallery G-17 does produce enough output to irritate the neighbours and sound integrity holds together even at maximum volume. Instead the issues are fundamentally related to design.

The first is bass reflex, usually the mainstay of cheaper docks, which requires significant volume to produce balanced bass vibration. As such at low volumes the Gallery G-17 is flat and bass virtually nonexistent and at full volume bass swamps the midrange and destroys detail. The sweet spot is narrow and, for our money, louder than you’d wish to have the G-17 on a daily basis. Ultimately we’d have preferred a little more size, given the reasonably large footprint, and a 2.1 setup. 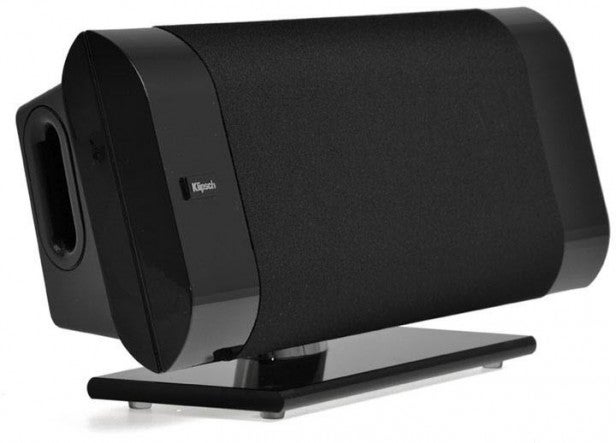 Secondly, and even more baffling, is Klipsch’s decision not to exploit the Gallery G-17’s elongated shape to gain better sound separation. As the images show, the drivers in particular are squashed right on top of one another and something that is already an issue for all docks (arguably the Arcam rCube excluded) is greatly exacerbated. It would be no exaggeration to say the G-17 sounds like a mono speaker. This makes audio uniformly flat regardless of genre and that isn’t good enough at this price point.

There are further issues with the Klipsch Gallery G-17 Air. The remote control is an afterthought with just the most basic functionality and cheap construction that could have come from a £50 speaker and there is no visual feedback from the G-17 when it is used – just a brief blink from an LED as functions are used. As such, switching outputs feels hit and miss and you don’t know if the speaker has received your instructions until you’ve often adjusted the volume too much or too little.

In addition the Gallery G-17 Air doesn’t remember which input you used last when it is switched off. This means should you be using the auxiliary input on a non-Apple device you have to cycle through the hit and miss inputs every time it is switched on. Lastly, and this is a feature of almost all iOS speakers, there is no dock to charge your iPod or iPhone. There is a powered USB port on the back for charging, but it lacks the convenience of a dock socket.

Then we come to price, something we have been hinting at throughout the review. In all fairness the G-17 Air would be a good product were it under £200, but a £429 RRP means it is judged to a far higher standard. As such this becomes faintly ridiculous because the G-17 is £179 more than the Monitor Audio i-deck 200, £79 more expensive than the genuinely portable battery powered Arcam rCube and only £70 less than the B&W Zeppelin Air none of which it can get anywhere near sonically and all of which offer dock functionality. Of these only the Zeppelin Air offers AirPlay functionality, which could prove a genuine consideration for G-17 buyers. But AirPlay is overshadowed by the compromises. 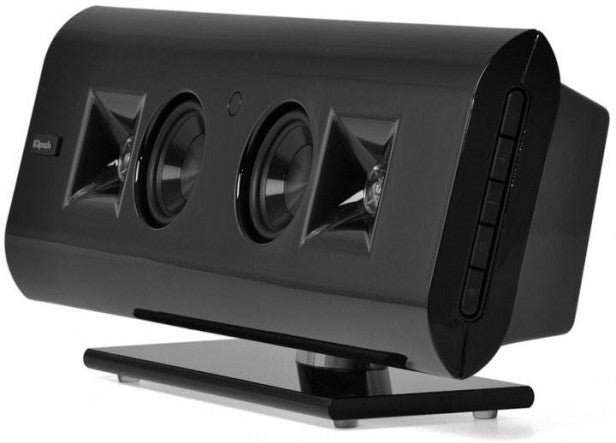 The Klipsch G-17 Air is a product condemned by its price tag. It is well built, reasonably portable (despite being mains powered) and its output belies its size. Unfortunately this counts for little when a £429 RRP places it against (and even above) competition of indisputably superior audio quality. When combined with other flaws like its laboured AirPlay connection, a bargain bucket remote control and near mono sound reproduction it means Klipsch must go back to the drawing board… or at the very least slash the price dramatically.