Update: price officially now reduced to £350 since this review and also includes an rWand iPod dongle.


That is one ballsy opening sentence, but it is exactly how Arcam introduced the rCube, a dock which arose from over three years of R&D. “No ifs, no buts – the best iPod sound system so far,” it continues – and the thing is, Arcam’s right…


Pull the rCube from its box and you wouldn’t expect to draw such a conclusion. Not because the dock is poorly made, but because it doesn’t announce itself with the pomp and ceremony of incumbent champ the Bowers & Wilkins Zeppelin. Whereas the Zeppelin’s stretched oval lines are a bombastic fashion statement that demands your attention the rCube is, well, a cube. 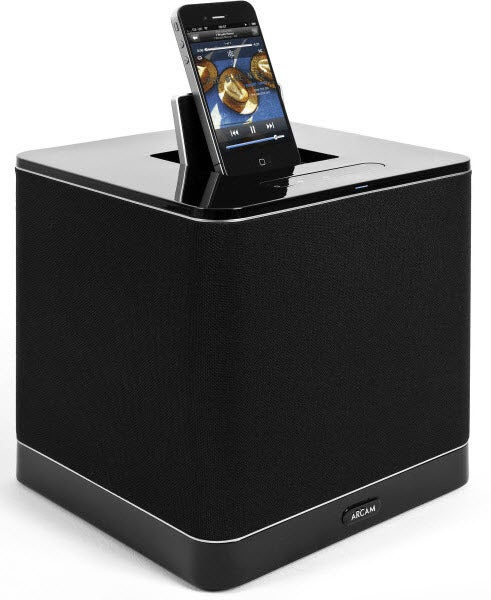 It isn’t even a particularly big cube. At 200 x 200 x 200mm it takes up less physical space than a football and isn’t a patch on the domineering 640 x 198 x 208mm of the Zeppelin. At just 5Kg is it also 50 per cent lighter than B&W’s masterpiece. For the audiophile with little space to spare the rCube is a wonderfully compact, timeless piece of engineering.


Look closely and expectations rise further. Its lid and base may be finished in our favourite love-to-hate-it piano black (dusters at the ready), but the build quality is first rate feeling every bit as solid as its design suggests. The touch sensitive controls are kept to a minimum with just source, WiFi (more of later), power and volume buttons along the top while mute is neatly enabled by pressing volume up and down together. You don’t need to be a technical wizard to operate the rCube.


Along a strip at the back you’ll find auxiliary, component and composite inputs with a USB port for firmware updates and a bass button. We’ll get to these in good time, but first we need to look at some specs.

For a box so small the rCube has mind blowing internals. There’s a 100mm bass/mid driver with bucking magnet to reduce magnetic interference and 25mm tweeters. These are backed up by a total of three amplifiers with two used in bridge mode for the bass/mid and in stereo mode for the tweeter. The result is a whopping 90 watts rms. We expected it to be impressive, but we weren’t ready for what came out when we switched it on…


I’m not a fan of endless superlatives so let’s place this section in some context. I unpacked the rCube while having tea with a friend who has been in the professional audio sector for over 30 years. Five minutes into some of his more exotic Nigerian blues (!) came the proclamation: “That is the best speaker dock I’ve ”ever heard!”” “That’s what the marketing claims” was my response, followed by a broad grin. “Dammit they’re right, aren’t they?!” Queue much slow nodding.

In short what astounds about the rCube is its power and clarity. Power isn’t to be confused with volume, rather its ability to project full, rich sound across a wide area. Sit left or right of the rCube and it makes no difference. Turn your back or listen from behind it and you’d swear you were still placed in optimum position. This is no coincidence. Arcam angles its amplifiers within the rCube to achieve this consistency with the only proviso being not to place the rCube in a book shelf with books either side. Sound comes out in all angles and in such a scenario you’d be strangling it.


Corners, on the other hand, are not a problem. The bass button I mentioned earlier isn’t a crass ‘boost’ but instead to counter the natural bass reverberation you’d get sitting the rCube in a corner. Toggle it off if you place the rCube more centrally, such as when having a party. It works a treat. 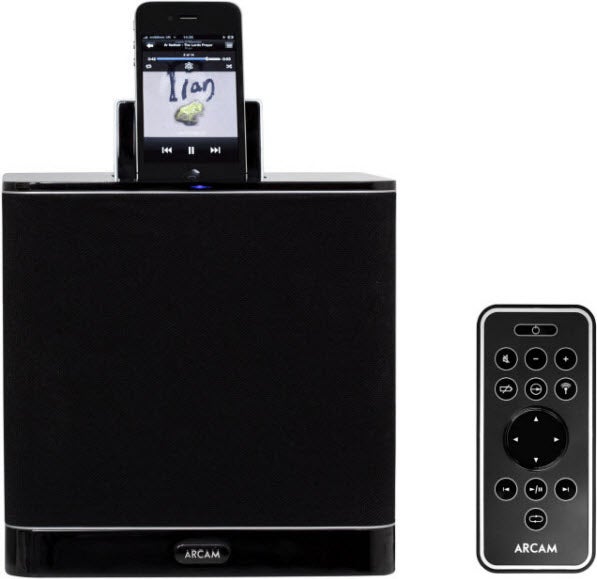 Now I’ve long preached that specific docks tend to favour one particular type of music. The bombastic Teac Aurb, for example, is for bass lovers while the refined nature of the GenevaSound Model S is better suited to jazz or classical music. Well consider my theory expunged by the rCube. Over the last three days I’ve thrown every genre possible at it and come away smiling from ear to ear each time. After its exemplary reproduction of Nigerian blues we moved through Charlie Parker’s jazz, The Prodigy’s big beats, Massive Attack’s sultry trip hop, Metallica’s raucous Black Album, Chopin, Rachmaninov and Beethoven.


This was followed up by Head Candy’s party fuelled dance, Daft Punk’s stunning electronica on the new Tron soundtrack, the beautiful guitar pickings of late greats Steve Ray Vaughan and Elliott Smith. BoB, Kanye West and Eminem failed to knock the rCube out of its stride either, nor did Whitney Houston’s warbling, Blondie’s high pitch or Barry White’s low one. By the time Fischerspooner’s Emerge had made the hairs stand up on my neck it was time to admit defeat. 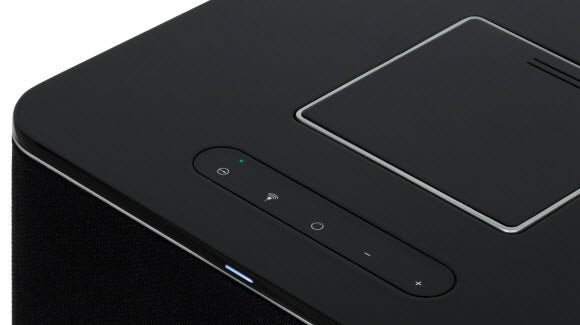 Distortion? Nothing. Even at maximum volume everything is crystal clear – another speaker dock first. So where’s the ”but”? There’s always a but…. and the rCube does indeed have a big one.


Let’s just get it over with: the rCube costs ”’five hundred pounds”’. Yes a £500 speaker dock and my price searching couldn’t find a single retailer selling it for less than £499.99. There is a simple reason for this: as a small British company, Arcam simply can’t make enough to satisfy demand. Still can the rCube really be £100 better than a B&W Zeppelin? The answer is yes, because it isn’t just a speaker dock…

Cast your mind back and we mentioned WiFi. The rCube comes with lossless streaming built in. This can’t be achieved by ordinary Bluetooth so Arcam has teamed up with maestros Kleer, the company behind such revolutionary products as the Sennheiser MX W1 earphones. The result is signal that transmits at up to 2.37MB per second yet has power consumption 10x as efficient as Bluetooth. You’ll need a Kleer USB wireless dongle or dock connector dongle to pair with (whisper it: £79.95 and £69.95 respectively from Arcam), but then true wireless freedom is yours. The rCube pairs with the dongles too, not the devices they are connected to so pass a dongle around a house party and let everyone have a go at playing something from their devices. 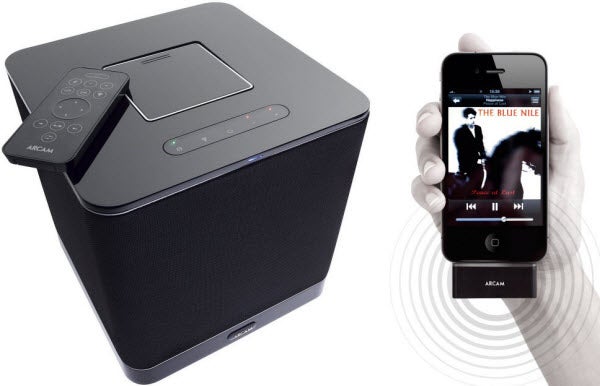 That’s cool aspect one and there are three, count them, ”three” more.

One. Every rCube can pair with up to eight more rCubes using its Kleer technology. This meshed network can be centrally controlled from any rCube creating a true Sonos rival for house wide audio. Two. Earlier I also mentioned a composite port. This enables the rCube to output video of up to 720p HD to any High Def TV with the cinematic audio provided by the dock itself. With handsets increasingly supporting this level of resolution it makes the rCube part sound dock, part home cinema video player and sound bar.


Three. Battery. Yes we finally have a high end sound dock with its own power supply to give the Bose SoundDock Portable a run for its money (and when I say “run” I mean drag it along the floor chariot style in the manner of Ben-Hur). Battery life is outstanding as well lasting up to eight hours on moderate levels and four to six hours on maximum volume. The flip lid on the rCube cleverly reveals a handle when open. It may cost twice the price of the dock you had your eye on, but when you can take the rCube all over the house with you then you don’t need to buy multiple docks for different rooms… at least until that bonus comes in and you buy another one and mesh them together! 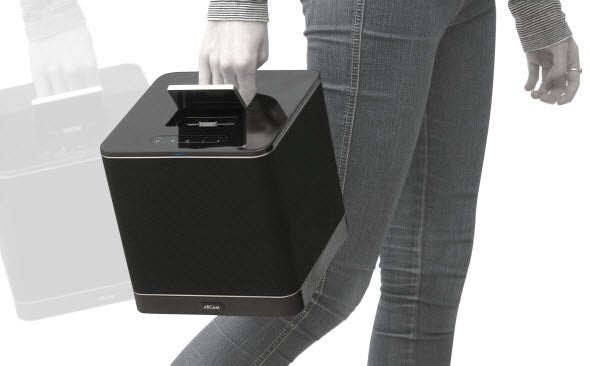 So the rCube is flawless? No. The power brick is as big as that on a desktop replacement laptop and HDMI would’ve been cooler than composite for video. Meanwhile it would’ve been nice to have one Kleer dongle bundled. If we’re being really picky, for all its power, the rCube could also be fractionally louder though you will need to live in a mansion to notice it. This is all nitpicking though because for once the marketing hyperbole holds up, Arcam has indeed made “the world’s best iPod/iPhone Speak Dock”.

The Arcam rCube may have come too late to be entered into our 2010 Awards, but for me it would have been my product of the year. As it stands it is day one of 2011 and it will take something truly special over the next 364 days to displace it in my heart. The B&W Zeppelin ruled the speaker dock roost for nearly three years, but its reign is over. At £500 the rCube isn’t cheap, but its acoustic performance is unmatched, its form factor minimal and its functionality way beyond that of its rivals.