Hi-Fis are out, docks are in. This may be a sweeping statement, but the addition of yet another high end audio specialist into the sector only adds further proof. For 40 years NAD has been a standout name amongst audiophiles and it has now joined the likes of Bowers & Wilkins, Arcam, Monitor Audio and more by entering the incredibly competitive sector of Apple docks.

Like its peers NAD has stuck to what it knows best, pitching the ‘Viso 1’ at the premium end of the market. This approach becomes clear before you switch the dock on. Out of the box it delivers a sense of déjà vu, yet somehow has a look all its own. NAD describes the Viso 1 as a ‘ring design’, referring to the silver band around it which contains the Apple connector. This is clearly inspired by the Bowers & Wilkins Zeppelin Air, but when combined with its tubular shape creates a dock that is stylish in its own right and delightfully different. 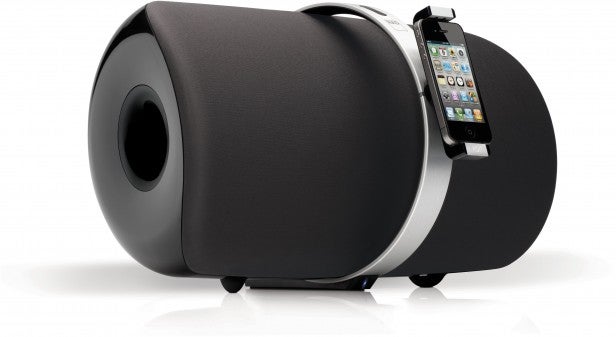 Build quality is similarly impressive, successfully blending the piano black finish of the rear with the matt speaker covering and brushed aluminium ring. NAD takes pleasure in showing how the Viso 1 was put together too with the exposed screw at the top of the ring almost daring us to reach for our screwdrivers. Meanwhile the Apple connector itself has an industrial feel, sliding open to accept the iPhone/iPod before closing back down to hold it securely. This needs to be done as the connector can rotate 90 degrees allowing devices to be used in landscape mode. The genius of the ring design is it allows comfortable use of the device while connected, the sizeable downside is it means an iPad won’t fit.

Connectivity continues this theme and smart hit and bizarre miss. A considerable hit is the addition of component video output which allows 480p and 576p iPhone/iPod videos to be sent to an HDTV while the Viso 1 plays the sound track. There is also an optical digital input which accepts up to 24/96k music from external devices like a TV, disc player or media streamer turning it into a sound bar. Meanwhile a microUSB port is used for updating the firmware. Given this goes beyond the usual array of dock connectivity it is all the more surprising NAD has neglected to include an auxiliary 3.5mm jack. This is by far the most common connector on any music device and will leave non-Apple product owners scratching their heads. 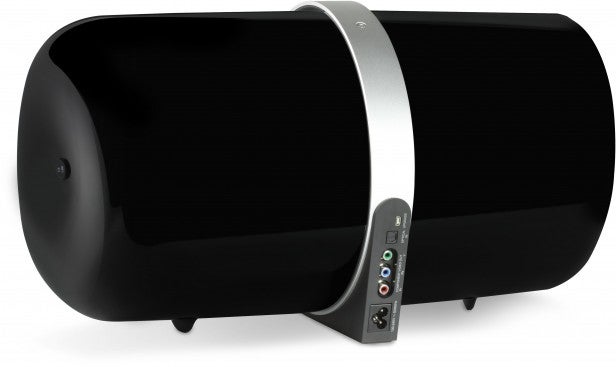 NAD does have an alternative: aptX. This is a proprietary audio codec which can be licensed and integrated into Bluetooth to offer significantly improved audio quality. What NAD doesn’t advertise is aptX requires support not just in the dock, but the source device as well. Happily over 100 products support aptX natively, including the HTC One X, One S, and One V smartphones, Creative Ziio 7 and Samsung Galaxy 7.0/Samsung Galaxy 7.7 Plus tablets, the Motorola RAZR XT910 and even Mac OS X Snow Leopard and above. There are also numerous dongles available. What doesn’t support aptX right now is Apple iOS devices which is significant as NAD has somewhat surprisingly (for a high end dock) omitted AirPlay, though it could add support through a software update at any point.

So what about the audio? Here NAD brings out the big guns. At the heart of the Viso 1 is the company’s top of the line ‘Direct Digital’ amplifier, the same amp seen in its $6,000 Masters Series M2 DAC. This bypasses the circuitry of the iPhone/iPod and takes their digital signal directly allowing it to process the audio directly. As such the Viso 1 is a bi-amplified system with digital crossover and NAD quotes the frequency response as 33Hz – 28kHz (-6dB), notably wider than the GenevaSound Model M for example.

As for the speakers themselves NAD has fitted the Viso 1 with a 1in aluminium dome tweeter mounted coaxially in the 2.75in (7cm) midrange drivers plus a 5.75in (15cm) subwoofer. Total output is quoted at 80 watts, 15 per channel to the stereo drivers and 50 watts to the sub. This less than the competition. The B&W’s Zeppelin Air and Monitor Audio’s i-deck 200 manage 150W and 140W respectively, while the highly portable Arcam rCube still cranks out 90W. That said wattage can mean as much to audio quality as megapixels to photography and the Viso 1 still packs a punch. 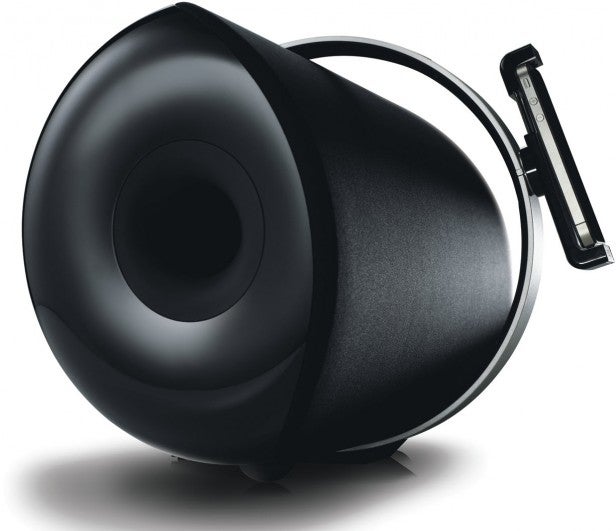 Bass response is what impresses most. NAD’s 33Hz response figure is significant as it is a lot lower than both the Zeppelin Air (51Hz) and the i-deck 200 (60Hz) and this is noticeable on particularly bass heavy tracks where detail is retained at low volumes while it holds together without any significant distortion even at maximum volume. Equally worth of praise is the Viso 1’s high range which delivers great clarity and rewards listeners of jazz and classical music in particular.

Flaws? If anything the bass will prove a little heavy for some and on big beat tracks this can overpower the midrange robbing it of depth. For all its bass prowess the Viso 1’s 80W output does come into play and it won’t fill a large room like the Zeppelin Air or i-deck 200. Meanwhile stereo separation is narrow, obviously so when compared to the 45 degree tilted speakers in the rCube. Another minor irritant is the remote control, while simple and with excellent range, it makes the Viso 1 give a confirmatory beep every time a track is skipped. 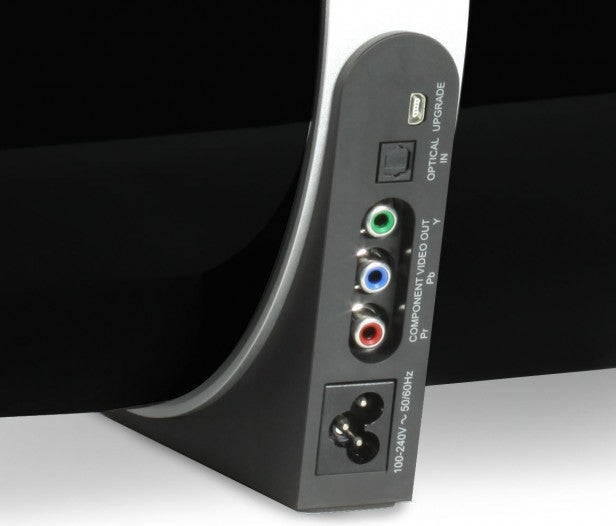 What brings the Viso 1 strongly back into our affections, however, is its implementation of Bluetooth. Granted it may not be the lossless-capable AirPlay, but even without aptX the DAC did a remarkable job of cleaning up the signal making it almost indistinguishable from being docked. Trying it with a aptX-friendly Motorola RAZR the results were astonishing and we’d challenge any audiophile to distinguish it from a wired connection. Non-Apple devices need an answer to AirPlay and for our money this is it, though a great deal of credit must go to the Direct Digital amp. We suspect the future for docks is to include both AirPlay and aptX.

All of which brings us to the ugly issue of price. On its own the Viso 1 is a fine dock with superb bass response and a wonderful DAC which performs miracles with its implementation of Bluetooth. It is also beautifully designed and looks good in virtually any setting.

The problem for NAD is the dock market is well established and full of beautifully designed, superb sounding docks that ”also” do battle on price. At £500 the Viso 1 doesn’t get involved in the last of these and, much like the remarkable Libratone Live, this is its biggest downfall. 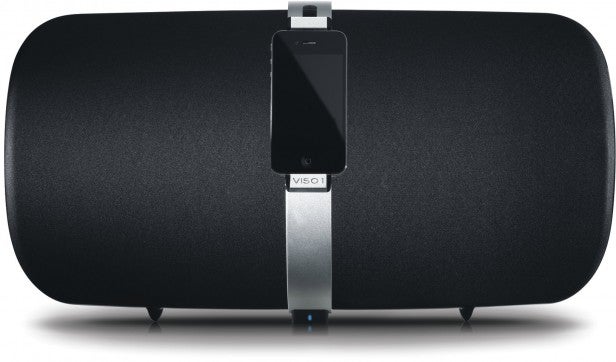 Libratone priced itself out of a TrustedReviews Award for pricing the Live at £599, but it did come with AirPlay, a 150W output and some truly unique, if slightly bonkers styling (cashmere wool is a £100 optional extra). The Viso 1 lands itself in the same situation because at £500 it costs as much as the more powerful, equally stylish, AirPlay equipped Zeppelin Air. It costs £150 more than the Arcam rCube which offers proprietary lossless streaming (an iPod dongle is bundled), is portable and has a built in battery. Meanwhile the Viso 1 costs twice as much as the £250 i-deck 200 which, while lacking any form of wireless connectivity, sounds every bit as good.

Consequently, while we welcome NAD to the dock sector with open arms, we are tempted to make the analogy of a great football player joining Barcelona… they become just another good player.

”’Verdict”’
NAD’s dock debut will turn heads with its eye catching design and superb bass reproduction. It will also make friends and influence people thanks to a fantastic onboard DAC which transforms its Bluetooth connectivity into a genuine alternative to wired. If you have an aptX enabled device this leaps another level turning it into an AirPlay rival. The problem is, for the price, the Viso 1 should have AirPlay as well. It should also be louder, fit an iPad and certainly find space for a 3.5mm auxiliary jack. Its rivals do and often for a lot less.