What is the Asus ZenBook UX303UA?

Asus has been churning out some great Ultrabooks in the form of its ZenBook range. I’ve been particularly impressed with the stellar UX305, which offers premium build quality and design at an affordable price.

With the UX303UA, the company has once again delivered the same superb build but this time with improved hardware to compete with the likes of Apple’s 13-inch MacBook Air and the Dell XPS 13. Inside the UX303UA sits one of Intel’s new Skylake Core i7 processors, 12GB of DDR3 RAM, and 256GB of solid-state storage.

The Ultrabook is available in a range of configurations, offering either a i3-6100U or i5-6200U chip, with 128GB, 256GB, 500GB or 1TB storage options. But it’s the i7, 12GB of RAM, and 256GB storage version that appears to be the standard configuration, judging by a quick glance at online stores.

At £899, the UX303UA isn’t the cheapest laptop, but neither is it the most expensive Ultrabook. In fact, it’s very reasonably priced, which makes it an exciting prospect for anyone looking for a top-performing Windows machine.

What’s strange about the UX303UA is that while the build quality is great, the design is a little underwhelming.

First, that signature Asus concentric circle, brushed metal finish has been retained for the aluminium case. It’s available in three colours: Smoky Brown, Icicle Gold and Rose Gold. I was sent the Icicle Gold version for my review and can say that while it certainly doesn’t feel cheap or flimsy, there’s something about the simple aesthetics that almost undermines Asus’ premium aspirations. 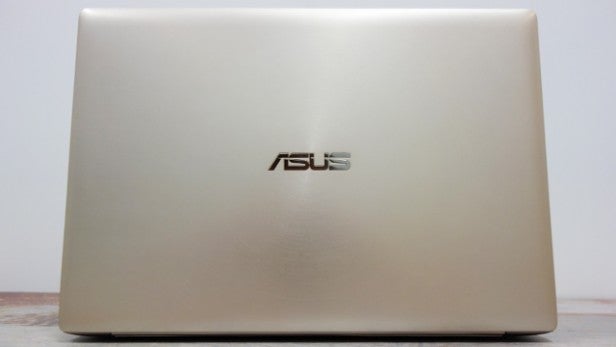 Prior to the UX303UA I reviewed Asus’ much lower-end Transformer Book Flip TP200SA, and to be honest, there’s very little to distinguish the two in terms of pure looks. The UX303UA obviously has a better build quality and feels decidedly sturdier, but from the outside both laptops look the same.

Perhaps it’s the “Icicle Gold”, which was more like a faded silver, that made it appear as though the laptop had seen better days. Or maybe it was that there was no standout design feature – the Lenovo Yoga 900’s intricate hinge, for example. Whatever it was, I just wasn’t getting the idea of  “premium” that Asus is promising here. 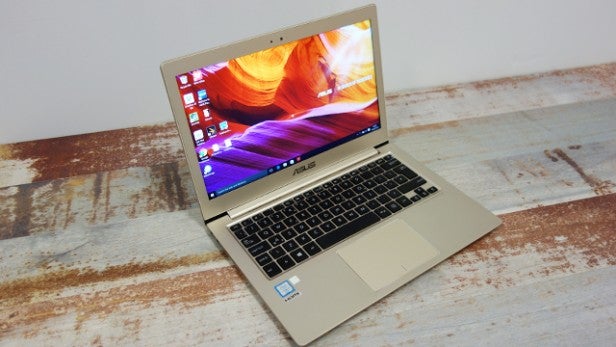 The large bezel doesn’t help either, detracting from any attempt to establish a high-end finish. Unlike the super-slim bezel on the Dell XPS 13, Asus’ laptop proudly sports a huge screen border that doesn’t do much for its overall look.

In terms of build quality, however, this laptop can’t be faulted. It feels robust, there are none of the issues that often come with lower-end devices – such as a rattling trackpad – and the top half of the case feels sturdier than the rather flimsy effort on the more expensive Lenovo Yoga 900. 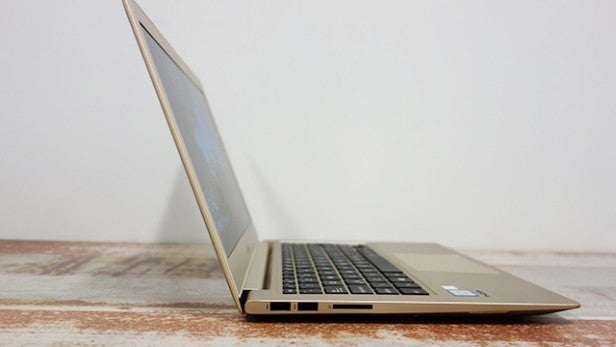 At 19mm, the UX303UA’s is thicker than the MacBook Air’s 17mm and the Dell XPS’s 15mm. It’s also bulkier than the UX305, which was an impressive 12.3mm at its widest point. The UX303UA isn’t the lightest or thinnest laptop you can buy then, but it’s still fairly compact and, like the Dell and MacBook Air, you’ll have little issue carrying it around.

In terms of ports, Asus has made decent provisions. The right side of the case features the power socket, mini-DisplayPort, USB 3.0 port, HDMI port, and the combo audio jack. On the left sit two USB 3.0 ports and an SD card reader.

Unfortunately, there’s no USB Type-C support, which would have made the UX303UA a much more attractive option in terms of future-proofing, although it’s great to see that Asus has included the HDMI-out port. 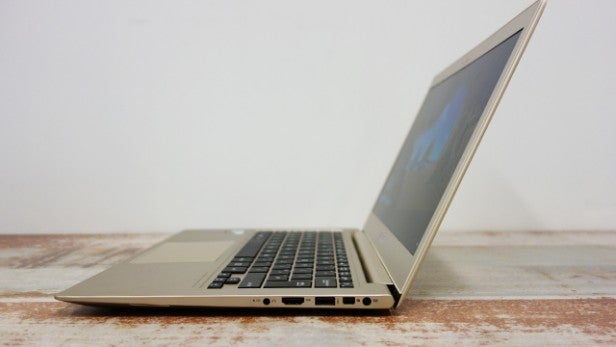 While some may find the UX303UA’s keyboard a little shallow when it comes to travel, I didn’t find it an issue. The non-backlit keys do feel a little spongy, but in my opinion layout is more important. If arrows are in an unfamiliar place, or the Enter key has been reduced in size, it can throw you off. Thankfully, there are no such issues with the UX303UA; I could type easily without hitting wrong keys. 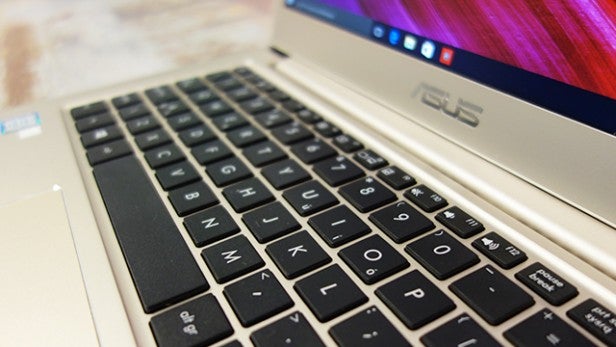 It would have been nice to have included backlighting, a feature offered by both Dell and Apple, especially since Asus has gone to the effort to provide impressive specs elsewhere. These days it seems backlighting has become a standard addition for many companies.

The size of the trackpad is impressive for a 13-inch laptop. It’s surrounded by a silver trim, and doesn’t suffer from any rattling.

I did have a recurring issue with tapping and dragging, however. When opening tabs in Chrome for instance, I’d tap on an open link, then move the cursor downwards only to have the tab follow me. It’s a minor issue, but one that I haven’t experienced with the MacBook, nor any other laptop in this price category. 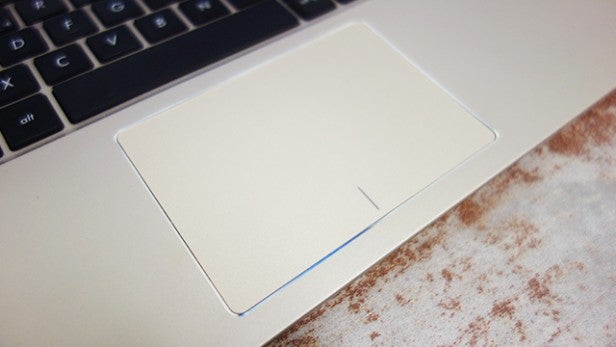 Overall, though, the trackpad felt responsive and I experienced no other issues using its features, including the three-fingered app switching and two-finger zoom functions.