Note: This is a review of the 2015 edition. The 2016 13-inch MacBook Pro has now launched for a much higher price, but with a completely overhauled design, build and specification.

Despite Apple launching its new MacBook Pro range this year, the 2015 model is still incredibly attractive thans to its lower price, great performance and fantastic screen. It makes the MacBook Air look kind of pointless and sets a very high bar for rivals to match, and might even cannibalise sales of the 2016 model until stocks run out. Read on to find out why we gave the MacBook Pro 10/10 in 2015.

Related: MacBook Pro vs MacBook Air: Which should you buy?

The current MacBook Pro design is nearly three years old now, but it looks and feels as fresh as the day Apple first unveiled it. It’s remarkably thin and light considering it uses “full-power” processors, as opposed to the low-voltage ones used in the MacBook Air, upcoming 12-inch MacBook, and potential rivals such as the Dell XPS 13 2015.

It weighs just 1.58kg – a shade over 200g heavier than the MacBook Air – and is 18mm thick. It’s not wafer thin by modern standards, but it has a smaller footprint than a MacBook Air. It’s a good 1cm narrower and shallower than the Air, so it’s handier in confined spaces like planes and trains. 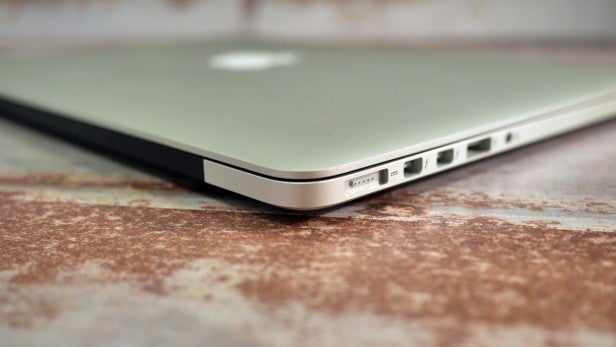 And all that’s before you consider the latest new feature, the Force Touch trackpad. It’s exclusive to the 13-inch MacBook Pro and new 12-inch MacBook at the moment – not even the 15-inch Pro gets it – and it takes the already excellent clickpad concept and makes it a little more refined.

It replaces the standard click mechanism with four force sensors and an electromagnet. Combined, they detect how strongly you press down, which gives you a few extra options in some places – Apple calls it a Force Click.

What’s more interesting, however, is how the Force Touch trackpad gives you same “click” sensation wherever you press. You have to press halfway down or lower to get a satisfactory click on the standard clickpad, but the Force Touch trackpad feels the same when you press the top corners as it does in the middle. It’s a subtle piece of engineering you’ll quickly grow to love.

This also means you can choose between three different click strengths – light, medium and heavy. Heavy feels the closest to current mechanical clickpads, medium feels more precise and less clunky, while light is arguably too subtle. 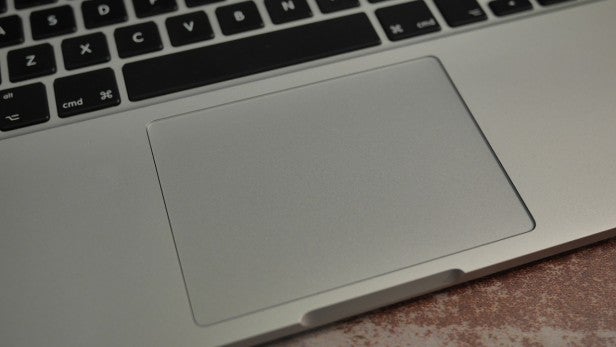 The Force Click options are interesting rather than groundbreaking. The best is the ability to seek faster through videos by pressing harder. There are five levels of speed, starting at 2x and ending with 60x, and each is greeted by a subtle yet obvious response. It feels a bit like stepping on a creaking floorboard – the harder you press, the more it gives a little. The Force Click method is more precise and tactile than clunkily jamming at the fast-forward button or guessing using the progress bar.

This is the best example of Force Click, but most Force Click actions use just the two levels – i.e. a normal click and then a little more pressure to activate the Force Click option. Force Clicking on a word brings up a dictionary definition, while clicking on a link or address will bring up a preview window of the page or a map.

None of this is indispensable – not in a way that makes it worth upgrading from a recent MacBook Pro, at least. But the Force Touch trackpad is great all the same, and it’s a persuasive reason to buy a MacBook over alternatives. 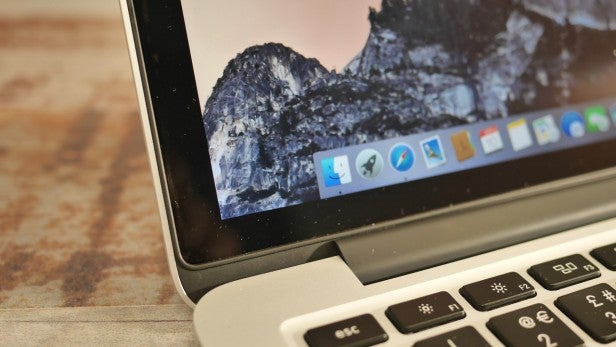 The official name is “13-inch MacBook Pro with Retina display”, which gives you a few clues as to what to expect. The 2,560 x 1,600 resolution equates to 227 pixels per inch, which is plenty for a screen you don’t inspect that closely. It’s razor sharp.

Mac OS handles this resolution much better than Windows, too, even if Windows has improved markedly in the last year or so. You can easily choose between “Larger Text” and “More Space” on a slider, and even the most generous option is useable provided your eyesight is up to snuff.

It’s not just sharp, either; the 13-inch MacBook Pro’s screen is also colourful, accurate and rich. Contrast is very good. Blacks have a deep, inky quality that really shines when watching films, and colours pop without appearing oversaturated.

The viewing angle is faultless and reflections are manageable for a non-matte screen. It’s a bright display, but not the brightest we’ve seen – a couple of extra notches would help neuter harsh reflections even better. This is the only real criticism, though, and it’s a trivial one at that. 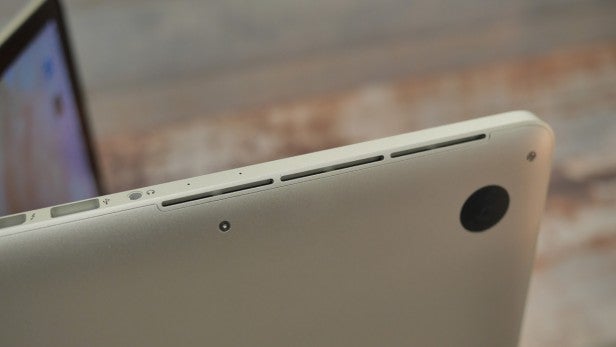 The built-in stereo speakers are pleasantly crisp and detailed, with just enough mid-range to prevent them being tinny. There’s only a hint of low-end bass, but that much is expected on a laptop.

They’re good speakers for casually listening to music and watching TV shows. They’re quite easy block if the MacBook sinks into a soft surface, though, as they’re built into the vents down each side.

Used as our main laptop for the review period
Tested for at least a week
Used consistent benchmarks for fair comparisons with other laptops
Reviewed using respected industry benchmarks and real world use
Next
Performance, Heat & Noise Review