Lenovo, a leader in the laptop-tablet hybrid market, impressed with last year’s Yoga 3 Pro. With its “watchband” hinge that rotated 360 degrees, the laptop combined innovative design with decent performance, making it one of 2014’s most intriguing Ultrabooks.

The Yoga 3 Pro did suffer from mediocre battery life, however, and its Core M processor meant that it wasn’t the fastest laptop on the market. This year, Lenovo has tried to address those concerns with the Yoga 900, the successor to the Yoga 3 Pro.

It isn’t only the naming convention that’s changed. The company has beefed up the internals with the latest Intel Core Skylake i5 and i7 processors, and a bigger battery that Lenovo claims will provide up to nine hours’ battery life.

Like its predecessor, the Yoga 900 can be used as both a laptop and tablet thanks to its rotating screen, with four different modes: Laptop, Stand, Tent, and Tablet.

With the added performance upgrades and continuing commitment to innovative design, the Yoga 900 certainly looks like it does enough to justify its £1,200+ price on paper. But can it really compete with other laptops at this level? What’s more, will another iteration of the Yoga design be enough to keep Lenovo at the forefront of the hybrid Ultrabook market, at a time when several other solid options – including the Surface Pro 4 – are available?

Considering the laptop’s high price (options start at £1,199.95), you’d expect a pretty well-built product for your money. But whether or not the Yoga 900 delivers in this department could well be determined by what you’ve become accustomed to. 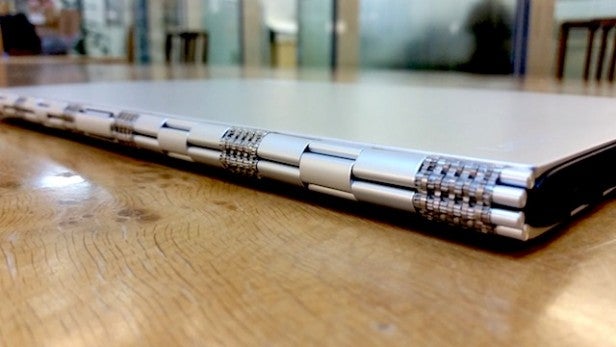 Starting with the positives. The “watchband” hinge, previously seen on the Yoga 3 Pro, makes a reappearance on the 900 and really does lend the device a premium feel. Lenovo claims that more than 800 pieces are used to make the hinge, slightly fewer than on the 3 Pro, which allows easy manipulation of the 360-degree rotating screen.

In my opinion, detachable screens have always been the best method by which to integrate tablet and laptop. But the ease with which the watchband hinge allows you to put the Yoga 900 into its different positions makes a strong case for the folding design.

Add to this the new auto-lock feature, which allows the keyboard and screen to snap together when they’re in close proximity, and the reworked hinge arguably makes the 900 the best foldable hybrid available at a time when 360-degree folding screens are no longer a novelty.

Elsewhere, the laptop has been bulked up in comparison to its predecessor. At 1.3kg, the Yoga 900 remains light – but, due to the bigger battery, it’s almost 0.1 inches thicker than the Yoga 3 Pro. Still, the 0.59-inch thickness remains impressive, putting the Yoga 900 close to the Microsoft Surface Pro 4’s 0.53-inches.

The metal finish lends the Yoga 900 a MacBook-esque feel. You can choose between a range of somewhat redundantly named metallic finishes: Clementine Orange, Platinum Silver, and Champagne Gold.

While the metallic finish does plenty to enhance the high-end aesthetic of the Yoga 900, like most laptops that try to emulate the MacBook design, this ultimately works as a disadvantage, enhancing the areas where the Yoga 900 can’t match Apple’s build quality. 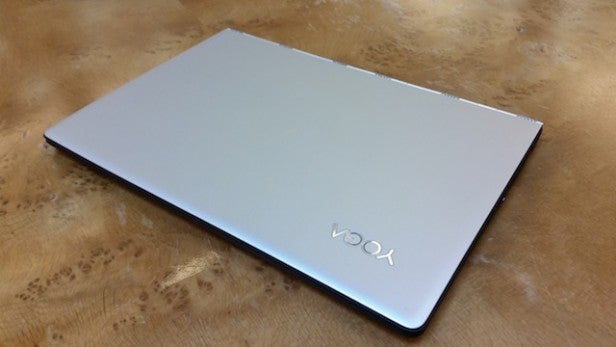 The same can be said of the screen, which, while decent, does have some
flex to it. When opening and closing the laptop, if you pull or push the
screen too hard from the corner, the casing will bend, which in some
instances will make the screen distort on the edges. Once again, this is
a small issue but when combined with other aspects of the overall
design, detracts from the premium feel of the Yoga 900.

The giant
bezel around the outside of the screen doesn’t do much to uphold the
high-end aesthetic either. When compared with the Dell XPS 13 for
instance, the overbearing bezel manages to make the screen section of the laptop seem
positively archaic.

By no means does the Yoga 900 feel cheap, but for anything over £1,000
you expect quality, and Apple has simply managed to consistently set
the bar for design at this price point. In other words, if you’re paying
this much, there’s no reason why Lenovo couldn’t match the sturdiness
and premium feel of a MacBook.

In a small but noticeable change to last year’s rubber finish, Lenovo has added a faux-leather finish to the area surrounding the keyboard. It may seem pointless at first, but the material serves a useful purpose by stopping the 900 sliding around on a table when being used in Tablet mode. It also feels fairly premium, and reportedly helps with heat dissipation.

The backlit keyboard itself improves on the Yoga 3 Pro by adding a dedicated row of function keys such as brightness and volume. The keys, with their rounded bottom edges, use Lenovo’s standard U-shaped design. Overall I found the keyboard felt solid and responsive, unlike lower-end laptops of a similar type. However, I did find the travel to be a touch shallow, but this didn’t detract too much from what is otherwise a robust keyboard. 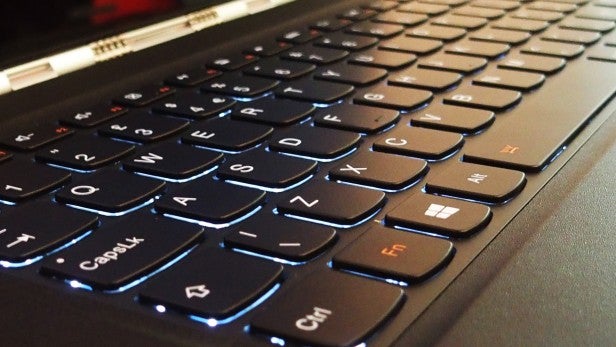 Once you flip the screen 360 degrees and use the device in Tablet mode, the keyboard locks so you don’t accidentally start typing or using the trackpad unintentionally. It does feel slightly strange using the laptop in this way, since the hand you’re holding it with will inevitably hit various keys. This can be distracting as first, as you instinctively feel as though you’re turning on all manner of functions with your unintentional keystrokes.

The buttonless trackpad is an area where the 900 falls short. It works well enough, but there was a very slight rattle to the pad on our review model and it would often force me to click twice as the first click wasn’t registered, which became irritating. While not major issues, these elements again undermine the premium feel initially established by the hinge and metallic finish. You can’t help but want a little more for your money.