We’re in the midst of a foldable frenzy. Companies are bending over backwards (sorry) to emulate the foldable laptop/tablet hybrid design, used perhaps most recognisably used by Lenovo on its range of Yoga convertible laptops.

There are several examples of the 360 degree hinge on the premium end of the laptop spectrum, but what about the budget ranges? Can you trust the design, let alone the performance, in a foldable hybrid that cost you less than £300?

Well Asus reckons it can convince you that the answer is ‘yes’ with its Transformer Book Flip TP200SA. It’s an 11.6-inch foldable two-in-one with some nice extras, such as a USB Type-C port, to try to set it apart from the competition.

However, with a somewhat underwhelming Intel Celeron dual-core processor, will design flourishes and added extras be enough to detract from what’s likely to be disappointing performance?

The 360 degree hinge is all the rage at the moment. It offers an alternative to the detachable screen setup found on other convertables, like the Surface Pro 4, and is a nice way of adding several different usage modes to the hybrid.

The TP200SA might not have the impressive ‘watchband’ hinge made of more than 800 parts that can be found on the Lenovo Yoga 3 Pro and Yoga 900, but it does exactly the same thing as its higher-end counterparts. Asus’ hinge is far from a marvel of modern engineering but it doesn’t need to be – it works. In the end, it makes you wonder why, with the amount of effort that goes into designing and producing a hinge with more than 800 parts, companies bother. 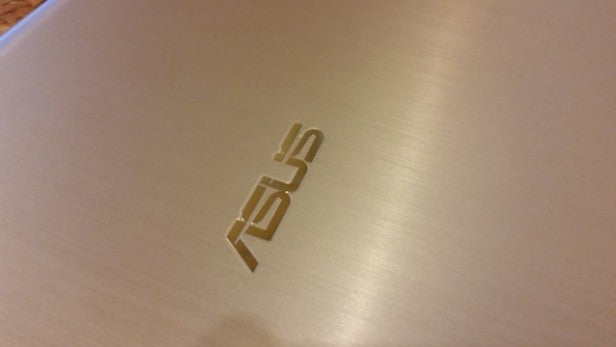 You can get the TP200SA in two colours, Dark Blue and Crystal Silver. My review model came in the latter. The laptop is covered in a metallic finish which Asus says has a scratch resistant texture. It’s nothing amazing but it does go some way towards making the laptop feel slightly more premium than its price would imply. The bottom of the case is plastic but this doesn’t really take much away from the design.

Also, everything is rounded on this thing. Every edge and contour has been smoothed off which gives the device a kind of quaint feeling, as if it were made for kids who might cut themselves on anything more defined. It’s not exactly a bad thing, but when combined with the device’s fairly small size it does sort of feel like a kid’s laptop.

Still, overall the TP200SA feels pretty sturdy and actually seems tougher than some high-end laptops I’ve used. The screen doesn’t flex or bend when you use it, although it does wobble a bit when typing, and there’s no rattling to be heard from any of the design features. The company says it has ‘carefully trimmed every last gram of excess weight’ from the TP200SA, and at 1.2 kg it certainly feels lightweight for a laptop, while still retaining that robust feeling.

It is a little on the heavy side for prolonged use as a tablet but at 18.5mm thick, the TP200SA is still impressively slim. For comparison, the HP Pavilion x2 is 19.8mm thick and the similar-priced Acer Aspire Switch 11 is a fairly hefty 25mm. All these foldable laptops feel somewhat cumbersome in tablet mode and although the TP200SA is no different, it feels more natural to hold than its larger equivalents.

Asus does however seem to have succumbed to an irritating trend among many companies who seem to have a proclivity for surrounding their screens with the largest bezel they can. I’m not sure what it’s going to take for them to understand that it’s just not cool anymore.

The thing about laptops this size is that the keyboard is inevitably going to suffer. Packing full size keys into a 12-inch device isn’t easy but Asus has managed it quite well. It definitely feels a little cramped, but the keys have a decent travel to them and they don’t rattle around too much. It’s not going to be the best keyboard you’ve ever used, but at this price point it’s pretty good. 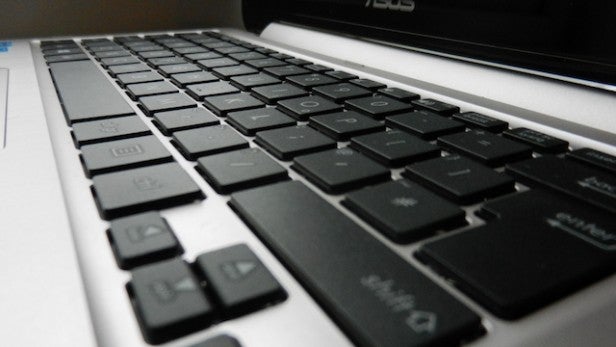 The trackpad was surprisingly responsive too. Unlike a lot of laptops at this level, the pad made it easy to perform basic tasks. When using two fingers to scroll for example, a task which seems to baffle many low-end devices of a similar sort, it worked better than some higher-end laptop trackpads I’ve used.

The pad is also pretty big. Asus says it has made it 46% bigger than ‘other brands’. Which laptops they’re comparing the TP200SA with isn’t clear but I can certainly say that the size is more than adequate.

With a 1,366 x 768 resolution and 135 pixels per inch density the, TP200SA’s screen isn’t the best you can buy. It’s fairly standard when compared to other laptops in its range however, matching the resolution on the Acer Aspire Switch 11 and beating the 10-inch HP Pavilion’s x2’s 1,280 x 800 display. You’re definitely not looking at a 4K display here, and you’ll notice the individual pixels, but this is no worse than anything else you can buy for under £300.

Colour reproduction is surprisingly good. Colours stand out without seeming overly vivid, and blacks, while not the deepest you’re likely to see, certainly don’t look washed out. The highest brightness level is also pretty good, although it didn’t match the top brightness of my Macbook, which is to be expected. Basically, you might have some issues using the TP200SA outside on a sunny day but the screen does the job otherwise.

You will notice a lot of reflections in the screen but this is hardly an issue specific to the TP200SA. The last laptop I reviewed, the Lenovo Yoga 900, had the same problem with a distinctly glossy screen and that device costs more than five times the price of Asus’ budget machine.

In terms of tablet mode, the display is responsive and accurate. I had no issues using the TP200 as a tablet and found it just as usable in terms of touch sensitivity as the more expensive foldable hybrids.

Used as our main laptop for the review period
Tested for at least a week
Used consistent benchmarks for fair comparisons with other laptops
Reviewed using respected industry benchmarks and real world use
Next
Performance, Software, Audio Review