Over the past couple of months Intel’s new Core i7 CPUs and X58 chipset have come to rule the high end of PC performance but the mainstream is still dominated by LGA775 motherboards that support Core 2 Duo and Core 2 Quad processors. So here we are with the ASRock N7AD-SLI which supports LGA775 with SLI graphics thanks to its Nvidia nForce 740i SLI chipset.


We’re well used to the idea of budget motherboards that make the most of the features in the chipset but we have to confess that the nForce 740i SLI didn’t immediately spring to mind. Clearly it is a basic chipset that supports a single PCI Express 2.0 x16 slot or dual x8, if you prefer to run SLI, but there is no digital switch and the ASRock employs a flip card to change from one mode to the other, which is a little bit inconvenient. There are six SATA II ports with RAID and six USB 2.0 ports with headers for four more USB ports which is all very reasonable when you consider the low selling price of this motherboard. 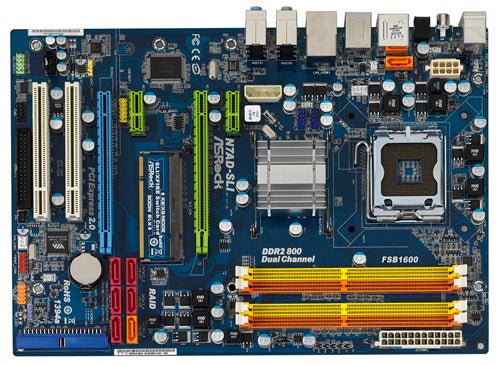 Although the N7AD-SLI supports Core 2 processors with a front side bus up to 1,600MHz in speed, the four slots of DDR2 memory are limited to a choice of 667MHz or 800MHz so we thought it wise to find out more about the chipset. We ran CPU-Z and found that the software identifies this nForce 740i SLI as nForce 730i which is intriguing as the 730i is a mono chip, rather than a two piece chipset like the one on the ASRock. Also, the 730i supports a single graphics slot while the ASRock supports SLI.


We checked nVidia’s website and found that the 740i SLI doesn’t appear on the list of products although nForce 730i, 750i SLI, 780i SLI and 790i SLI are present and correct. Next we picked up the phone and asked Nvidia’s PR about 740i SLI and … drew a blank. It seems that ASRock has either found a secret chipset or has somehow persuaded nForce 730 to support SLI.

The N7AD-SLI covers the chipset with a small passive cooler that is boxed in by the CPU cooler, primary graphics card and memory modules and during our testing it got rather hot. We’ve previously suffered nVidia chipsets that get hot enough to cause injury or for the system to blue screen or lock up and this is mild by comparison but we felt it judicious to set a case fan blowing on the chipset.


The layout of the ASRock is dominated by the dual graphics slots which are widely separated to ensure you will have space between the graphics cards even using a pair of double slot cards. The single IDE connector is laid down to ensure that the cable doesn’t get in the way and the six SATA II connectors are arranged in two rows just above the secondary graphics slot.

Although space is limited the main components fit in neatly enough and ASRock has helped the situation with an unusual choice in the location of the USB headers. There are six USB 2.0 ports on the I/O panel and two headers that support four more ports however these headers are not arranged at the foot of the board in the traditional location. Instead they are placed above the main graphics card next to the chipset which, of course, includes the Southbridge and the USB controller.


You don’t get any brackets included in the package so logic says that you will be using the headers with case mounted ports and this novel location is absolutely fine for that purpose. If you choose to use USB brackets the cables would have to trail across the top of the graphics cards, which is of course less ideal.


Other ports on the I/O panel include two PS/2 ports, audio jacks with optical and coaxial S/PDIF, one Firewire, Gigabit LAN and one eSATA port, which is a full set of connectors by any standards.

We tested the ASRock with a Core 2 Duo E8500 along with 2GB of DDR2-800 and an MSI GeForce 8800GT and found that the N7AD-SLI overclocked like a dream. We were able to crank up the front side bus from 333MHz to 420MHz which raised the clock speed from 3.16GHz to 3.99GHz which nearly matches the superb Abit IP35 Pro that we used when we originally reviewed the Core 2 Duo E8500.


Although the clock speed was impressive the performance was held back by the 800MHz clock speed of the DDR2 memory but overall we were very happy. Things took a turn for the worse, though, when we installed a second GeForce 8800GT and enabled SLI as the system crashed in benchmark after benchmark. We reduced the CPU speed a number of times until we finally reached the stock speed of 3.16GHz when all was finally well. The problem is that the pair of 8800GT cards with a 3.16GHz CPU delivered the same performance as a single 8800GT with an overclocked 3.99GHz CPU.


It occurred to us that the problem may lie with the graphics driver which was the elderly version 178.24 so we switched to version 180.48 and tried another benchmark on standard clock speeds. It came as something of a surprise when the system locked solid and the only way we could get it back to life was by removing the two 8800GT cards and replacing them with a Radeon HD 3650 to persuade Windows Vista to install a standard VGA driver. We reverted to driver 178.24 with an 8800GT and all was well.


So the upshot is that SLI didn’t work effectively on the ASRock with the GeForce 8800GTs, which in turn makes us wonder about the point of the N7AD-SLI.


The provenance of the nForce 740i SLI chipset is vague to say the least and in the case of the ASRock N7AD-SLI it misses the mark as SLI support is decidedly shaky.


ASRock contacted us after we published this review and informed us that the problem with overclocking with SLI was due to the CPU voltage being not high enough. We tested this and can confirm that a minimum 1.4V is required for the board to overclock with two graphics cards. This is quite a strange occurrence and is certainly something we wouldn’t expect to see even on a cheap motherboard like this. Besides which, we couldn’t even get the CPU to overclock as far with two graphics cards as we could with one. Nonetheless, baring in mind it is at least possible now, and especially now with nVidia having finally confirmed the existence of the 730i chipset, we feel this board is deserving of a slight reprieve. As such we’ve revised the scores to reflect our new opinion of it.


None of the original review text or performance results have changed.