The changes to this iteration of iLife are perhaps the most minor we’ve seen to date, but Apple doesn’t deny that this is an update more than a revolutionary refresh. That Apple’s website invites you to “Upgrade Now” not to “Buy Now,” isn’t just because iLife ’11 is bundled with all new Macs, we feel.


The price reflects the nature of iLife ’11, too. At £45 the whole set of programs costs less than a single rival to each component part might. Obviously iPhoto and iMovie aren’t going to rival Photoshop or Final Cut for users who need those more powerful applications, but for the casual user just grabbing content from their iPhone and chucking it on Facebook or Flikr that’s not necessary. 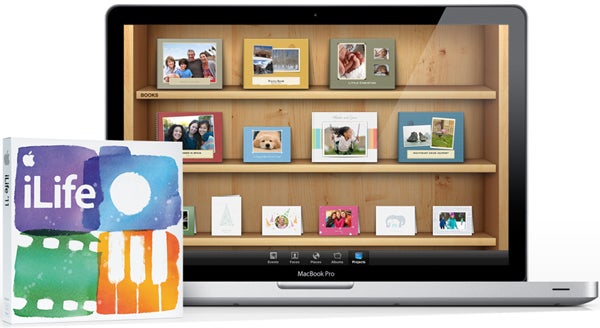 The mix of component programs remains nearly unchanged, iPhoto, iMovie and GarageBand offering ways to improve or just play with photos, movies and music respectively. We did notice that iWeb seems to have been omitted from the iLife family, but we can’t see anyone lamenting its departure.


iMovie remains as powerful an editing application as your average iPhone or Flip cinematographer requires. The additions in this iteration look particularly geared towards users of small, portable video cameras – such as those built into your iPhone or iPod touch.


iMovie’s image stabilisation ability is a prime example of this beginner-friendly approach. On importing a video file from an external device, iMovie will ask if you want to apply stabilisation to it (you can also do this later if you chose). This processing did a pretty good job of removing the odd judder from our videos, of the sort induced by holding a small recording device with one hand – intentional shakes remained as present as ever though. Processing takes a couple of minutes on longer videos, or less powerful Macs (say, an 11in Air), but is tolerably fast. 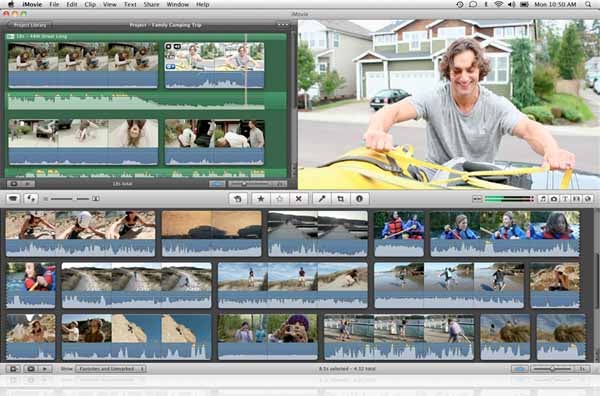 Another option available on importing is to have People in your video files tagged using the same Faces detection as featured in iPhoto. As well as identifying which people are in any given video, this also gives the ability to find shots featuring anyone, specific persons or groups of people, which should prove useful if you’re the type who ends up with holiday videos comprising three hours of scenery to every few minutes of family members doing something.

Offering some immediate wow factor is the new Trailers ability. This provides 15 pre-set templates into which you can plug your own videos and have iMovie spit out something vaguely resembling a movie trailer. There are a number of basic options to tweak, in addition to wide range of visual effects to add, but the tends to end up looking pretty similar. 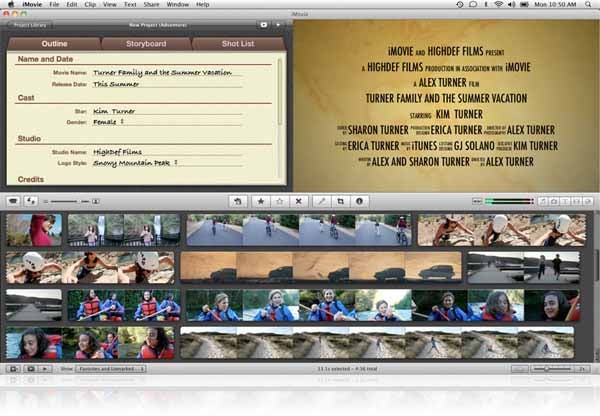 We found ourselves much more appreciative of the new audio editing options, which let you tweak the sound accompanying your video footage without needing to venture into a separate editing program. Similarly simple to get to grips with is the range of video effects that can be applied. As with ‘real’ movies, moderation is key – sepia for the sake of it isn’t artistic, it’s just annoying – but the YouTube Generation will probably have a whale of a time.


GarageBand is still something of an anomaly, in that although the majority of Mac users are likely to want to edit photos of movies at some point, music editing and creation is a much less common activity. This version of GarageBand comes with even more free, starter lessons, making the only hard part of learning an instrument the requirement that you put in the requisite practice. 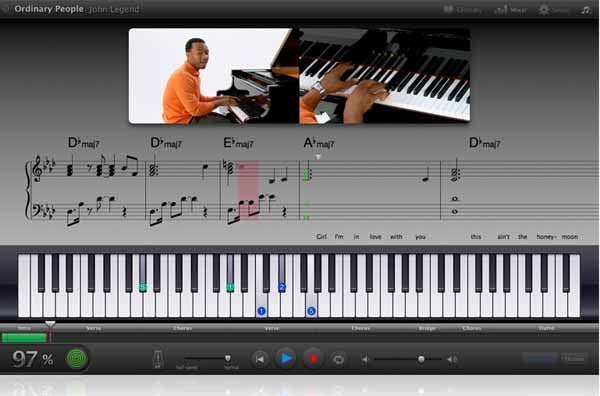 Some might argue that music lessons from the likes of Death Cab for Cutie’s Ben Gibbard are exactly what the indie music-loving, Starbucks-frequenting, hipper-than-though Mac crowed desires. Instruction from Sting might equally be construed as appealing directly to those picking up a guitar as a cheaper alternative to the mid-life crisis sports convertible. We’ll let other be the judges.


As has been detailed before, the pricing for the celeb-taught lessons might be a little steep for some, at £3.94 a go. You could easily find a book full of tutorials for less than that and the Internet as ever offers an almost limitless source of free options. However, even if you don’t care for the celebrity status of the tutors the production quality is miles better than what you’ll find on YouTube, which is definitely an advantage, making the bigger annoying how few of these videos are available – perhaps suggesting there isn’t as much market for them as Apple would no doubt like.

We’re particularly keen on the new “How Did I Play?” option available on lessons. As the name alludes, this mode enables you to have your attempt at replicating the lesson recorded, and provides feedback as to how well you did. The game-like, competitive element this adds to learning won’t necessarily force you into practising more often, but it certainly doesn’t hurt. 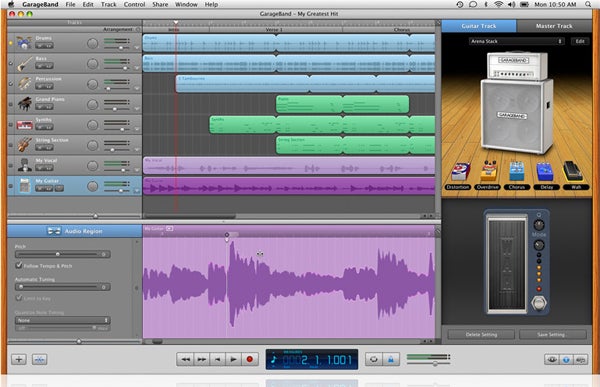 We’re almost impressed that Apple feels the addition of a Full Screen mode to iPhoto can be considered anything other than a nicety. While we take the point that displaying more photo is, indeed, an advantage in an image editing application, we’re not sure the extra 20 pixels or so that moving part of the UI out of the way affords is going to make that much difference to anyone’s productivity.


We can see the improved web-integration being of much greater use and appeal to the majority of iPhoto users, letting you push photos from iPhoto to the likes of Facebook and Flickr. Facebook integration is particularly tight. Not only can images be uploaded, but also albums created and rearranged. What’s particularly net is that changes made at both Facebook’s end and in iPhoto will reflect in the other – and of course iPhoto’s Faces tagging ties in nicely with Facebook’s own tagging system; you can even see comments on your images fro within iPhoto. 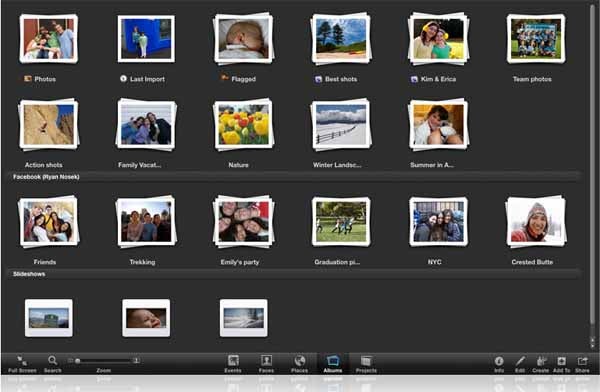 Apple’s print service has been revamped for this release of iPhoto. The range of products Apple offers is impressive, from hardcover, bound books to letterpress cards, and the creating these is almost insultingly easy. However, the pricing is high enough that you won’t be making use of this feature very often, if at all. Likely to be used somewhat more frequently is iPhoto’s slideshow feature. Not only are the new animations are pretty cool – we particularly like the hanging mobile effect – but we have enough elderly relatives to know that if there’s one thing that folks like doing more than taking photos, it’s showing them off.


As with iMovie and GarageBand, the additions to iPhoto aren’t going to set your world on fire, but they add additional polish to an applications suite that already shone.


The changes in iLife ’11 are far from ground-breaking enough that you need to upgrade from iLife ’09, if you have that on your Mac. That isn’t to say, however, that iLife ’11 isn’t a decent product. The upgrades are minor, but they’re minor upgrades to what was already a slick applications suite. Pros will need more powerful tools, but for the average Mac user, iLife will prove more than comprehensive enough.