When we first saw the 3-in-1 Mobile Travel Router it had us wondering why a manufacturer that has traditionally focussed exclusively on power protection should decide to start dabbling in wireless consumer products. The answer is actually quite simple as this palm-sized device is designed to complement APC’s TravelPower Case. In its entirety this aims to deliver a complete power solution for mobile workers allowing them to run their notebook, PDA and mobile phone from a single power source so negating the need to lug a bag full of transformers around with them. APC prefers to describe this as a data protection solution so the router rounds it all off nicely by providing a simple wired and wireless network access device but with a range of security measures to boot.


The router will function happily without APC’s TravelPower Case as it can be powered from the bundled external supply or via a USB port using the supplied proprietary cable. It has a single 10/100BaseTX Ethernet port but the four-position switch on its side allows it to operate in a range of modes making it even more versatile. With the switch in position 1, the router functions purely as an access point (AP) where it provides wireless access to users within an existing home or business network that already has services such as DHCP, Internet access and security implemented. Position 2 changes it into Router/AP mode which activates its own DHCP server allowing it to provide secure access to networks in remote locations such as hotels that may not have any built-in security. 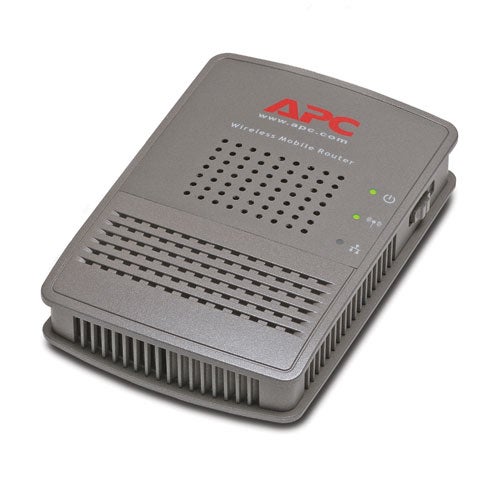 Switch position 4, or client mode, is primarily for devices that don’t have a wireless connection. The router is connected directly to a device’s Ethernet port where it turns it into a wireless interface. The router has its own web browser management interface but in modes one and four it functions as a transparent gateway which has no IP address of its own. Flicking the switch to position 3 puts the router into a configuration mode which provides DHCP services on the WLAN interface plus default a LAN IP address and WLAN SSID.


In mode 3 the router can be accessed either with it connected directly to a PC or notebook’s Ethernet port or via a wireless connection. Just load a web browser, type in the supplied URL and the router’s home page opens with a well designed interface offering easy access to each function. The System page allows you to modify those settings that affect all operational modes. You can set the MAC addresses for the wired and wireless ports of the management PC, change the administrator password and switch off authorisation.

Different SSIDs are used for AP and AP/Router modes and both support SSID masking. Wireless security extends to 64/128-bit WEP and WPA-PSK and you can use a MAC address list to restrict access to trusted systems.

The AP/Router screen provides further access to the router’s WLAN IP address and DHCP server parameters and you can set different connection types. Most will probably use the Travel Mode which allows the router to receive an IP address from an external DHCP server plus DNS details although it does also support PPPoE, PPTP, L2TP and static addressing. The Advanced settings page provides access to a wide range of extra options. You can create a single DMZ to allow one PC to be placed outside the firewall, use port forwarding to send specific types of inbound traffic to a designated server while basic network diagnostics consists of Ping and DNS lookups. The router uses a standard SPI firewall but can also detect DoS (denial of service) attacks and drop the offending packets. 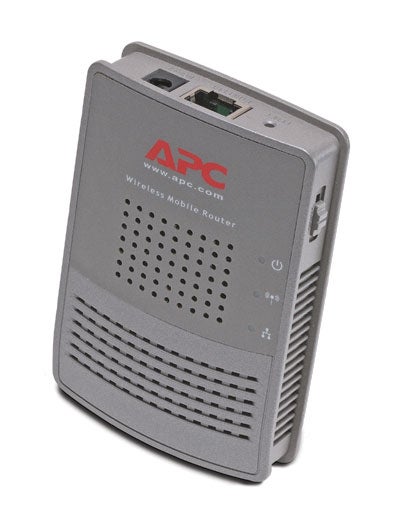 General wireless performance for this little device was quite reasonable. We called in a Fujitsu Siemens LifeBook equipped with a Proxim ORiNOCO triple speed Combo Gold card and used the open source Iometer to test raw read throughput to a PC on the LAN. In AP mode and with encryption disabled Iometer reported an average rate of 18.8Mbit/sec which compares very favourably with standard 802.11g wireless APs. However, encryption overheads will take their toll as the same test with WPA-PSK selected saw this drop to a low of 11.5Mbit/sec. AP/Router mode delivered very similar results and we tested the Client mode by linking the notebook over a wireless connection to a ZyXEL Prestige 2602HW router where we saw raw throughput over an unencrypted link settle down to 17.8Mbps.


If you’re planning on leaving the router switched on for extended periods we would recommend making sure it has plenty of ventilation as even the manual warns that it can get hot. We did find the unit getting quite toasty after leaving it running for a few hours but wouldn’t say it was anything to be overly concerned about.


Naturally, those users who already have APC’s TravelPower Case will find this compact router an ideal addition. Its size and feature set also make it worth considering as an easily transportable communication package for mobile workers who need secure wired and wireless Internet access from a variety of off-site locations.