The RX 6900 XT is a very competent graphics card that offers top-notch 4K gaming and features plenty of headroom for overclocking. But its price and lack of DLSS put it a step behind its Nvidia rival in a couple of key areas, including ray tracing.

If this sounds familiar, it should. It’s the same pitch Nvidia made with its latest GeForce RTX 3090 graphics card.

The big difference is that, like the AMD RX 6800, the 6900 XT doesn’t currently offer an equivalent to Nvidia’s DLSS (Deep Learning Super Sampling). Instead, AMD is hedging its bets on winning buyers over with higher clock speeds, a lower TDP and swish Infinity Cache and Smart Access Memory tech.

Confused by all the technical talk and just want to know if the RX 6900 XT is good? Scroll down to find out everything you need to know about the AMD RX 6900 XT.

The AMD Radeon RX 6900 XT has a similar triple fan design to AMD’s other current-gen Radeon cards. It also features similar connectivity coming with a single HDMI 2.1, two DisplayPort and single USB-C ports. The primary is particularly important as it opens the door to higher resolutions and better bandwidth. The card also has a typical 2x 8-pin PCIe connection, rather than the custom pin system seen in Nvidia’s new cards.

But like all the latest AMD cards, it’s what’s beneath the surface that makes them interesting. The RX 6900 XT is built on AMD’s RDNA 2 architecture. This is the same architecture used in the lower end RX 6800 and 6800 XT cards as well as the current generation Sony PS5, Xbox Series X and Xbox Series S consoles.

It brings with it a few key firsts for AMD. The biggest is ray tracing. This is a key technology Nvidia brought to mainstream gaming with its original line of RTX 20xx cards. It’s a demanding graphics solution that lets games render light significantly better, opening the door for things like real-time reflections, better shadows and generally more realistic physics.

However, RDNA 2’s ray tracing works a little differently to Nvidia’s. Architecturally this is because the two companies achieve ray tracing using different methods: AMD does it by loading dedicated ray-tracing accelerators to its cards, while Nvidia powers it with custom RT cores.

Engineering speak aside, the consequence is that not every game will support Ray Tracing on both AMD and Nvidia cards. As it stands custom ray tracing exclusives for Nvidia include things like Minecraft and Quake RTX. But AMD’s also got a few, like Godfall, which will only work with its cards initially. 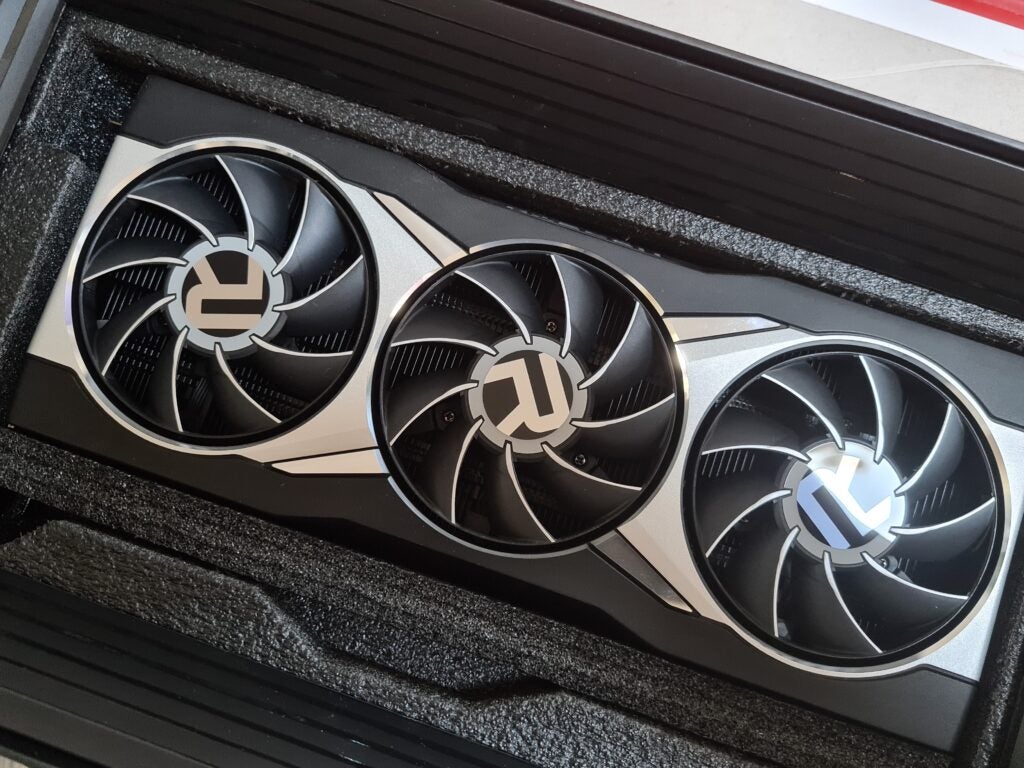 Nvidia claims it won’t pursue proprietary ray tracing exclusives and that the tech will be open. But, AMD’s actually toting this as a strength, claiming its place in the current generation consoles mean developers will naturally move to its platform and create titles based on its FidelityFX suite of tools. How this will work is a little confusing as the Nvidia cards should still support ray tracing titles so long as they use the common Vulkan or Direct X 12 APIs, which next to all PC games do.

The other big difference is that the 6900 XT uses GDRR6 VRAM, not the newer more expensive GDDR6x seen on Nvidia’s equivalent priced cards. AMD claims this is because its Infinity Cache tech removes the need for it. This is also a key reason it has a lower TDP than the Nvidia RTX 3090 and RTX 3080, and the 6900 XT will comfortably run on 850W PSUs and above.

Outside of this, AMD’s making a big song and dance about the card’s clock speeds, which are higher than the more expensive RTX 3090’s. However, given the fundamental differences between how AMD and NVidia’s architectures work, this isn’t the best metric for performance.

You’ll also note that the AMD cards don’t have a tensor core count. This is because a tensor core is a custom technology from Nvidia that powers DLSS tech. This aims to radically improve gaming performance by letting the GPU better predict what frames are coming up and upscale content. AMD doesn’t currently have an equivalent solution, though it has promised to launch one sometime next year.

You can check out a more detailed breakdown of the card’s specs in the table below.

While specs and architecture breakdowns are great, the truth is they’re all pretty meaningless to gamers, who generally only have one question when it comes to GPUs: how fast is it?

Here to help answer that question we ran our RX 6900 XT sample through a series of synthetic and in-game benchmarks to gauge its performance. The card was set up in the same test rig we’ve used for other current-generation GPU reviews.

We ran every game in 1080p, 1440p and 4K with its graphical settings cranked to max. Compatible titles were also tested with ray tracing and DLSS on/off. Unless otherwise indicated the games ran using Direct X 12.

Control
Control is considered one of the best examples for Ray Tracing. It’s a demanding title full of advanced physics and highly reflective environments. It doesn’t have an in-built benchmark so we gauged performance by taking an average FPS count running through an office section of the game rammed with reflective surfaces.

The RX 6900 XT offered playable frame rates at every resolution with Ray Tracing turned off, and much better speeds than the cheaper RX 6800 with it on. But once again, the lack of a DLSS solution meant it only managed to exceed the hallowed 60fps mark in 1080p and fell below 30fps in 4K with ray tracing on.

It doesn’t have an internal benchmark so we gauged performance by taking an average fps count running through a section of the Nordalys War Story.

Here the RX 6900 delivered solid post 60fps speeds across the board with ray tracing turned off, exceeding the 3080 by over 10fps in 4K. Performance fell behind the Nvidia card with it turned on, where it once again fell dangerously close to below 30fps speeds in 4K. 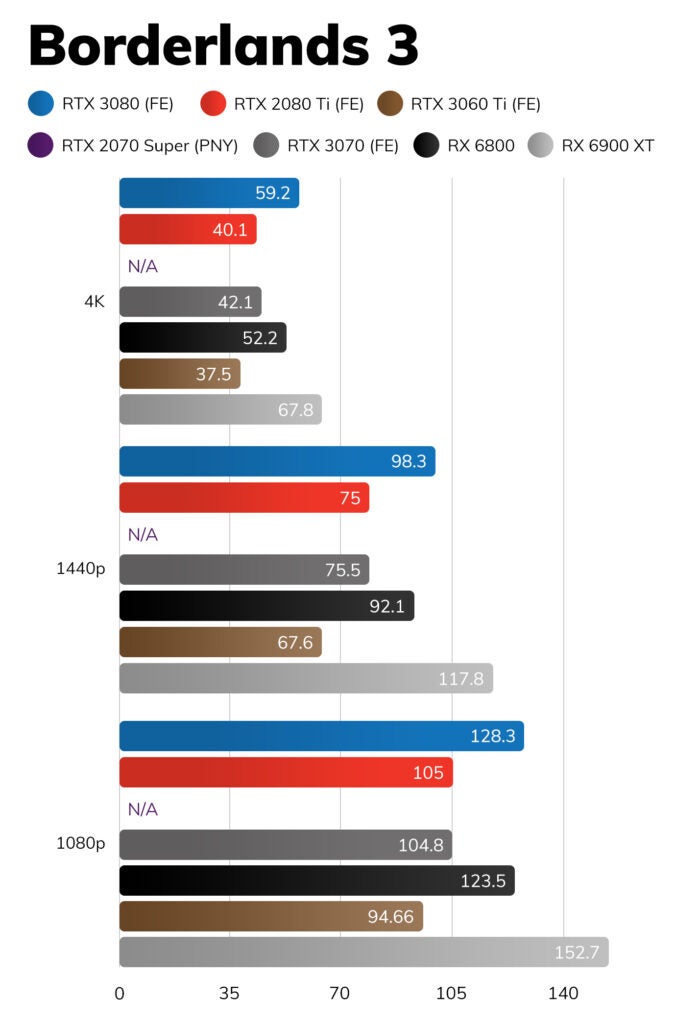 Borderlands 3
Borderlands 3 is a notoriously demanding game that really puts a GPU through its paces, despite not supporting ray tracing. It’s a massive open-world, multiplayer co-op shooter full of chaotic maps, advanced lighting and demanding physics. Here the RX 6900 XT presented a respectable lead, beating the RTX 3080 in every resolution we tested running its internal benchmark. 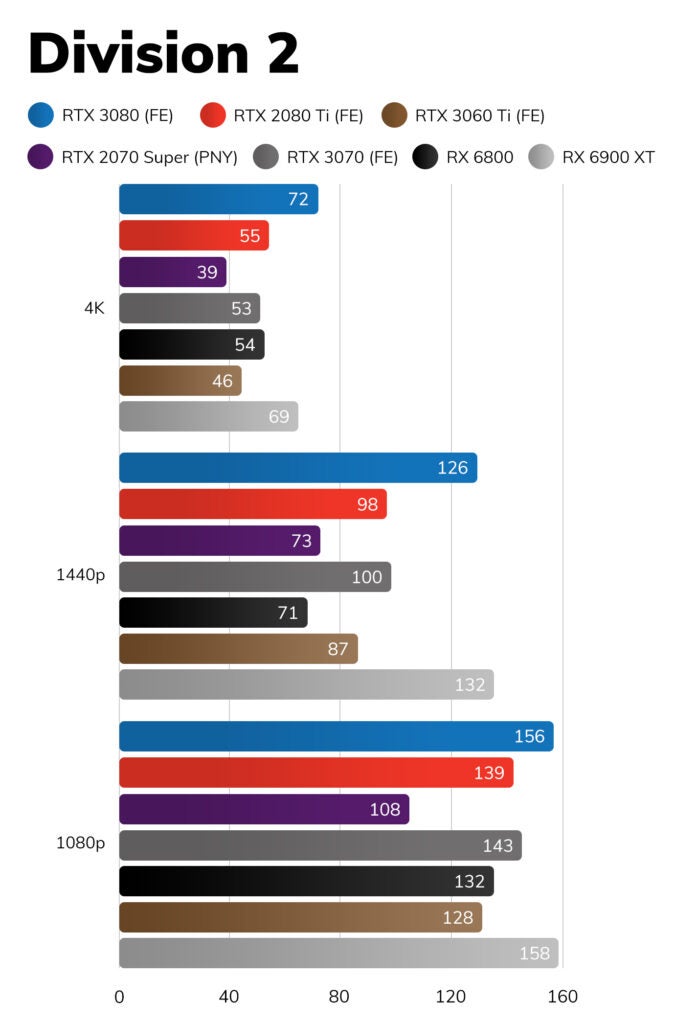 The Division 2
The Division 2 is one of Ubisoft’s ongoing live service games. It’s a multiplayer shooter set in a fictional post-apocalypse United States. It’s not the most demanding game in our test suite but it’s a good metric to tell how a GPU will handle most live service games, like Destiny 2, Overwatch, Apex Legends etc.

Here the RX 6900 XT delivered playable, post 60fps, speeds in every resolution running the game’s internal benchmark. It failed to offer a significant lead on the cheaper RTX 3080, however, which is slightly surprising. 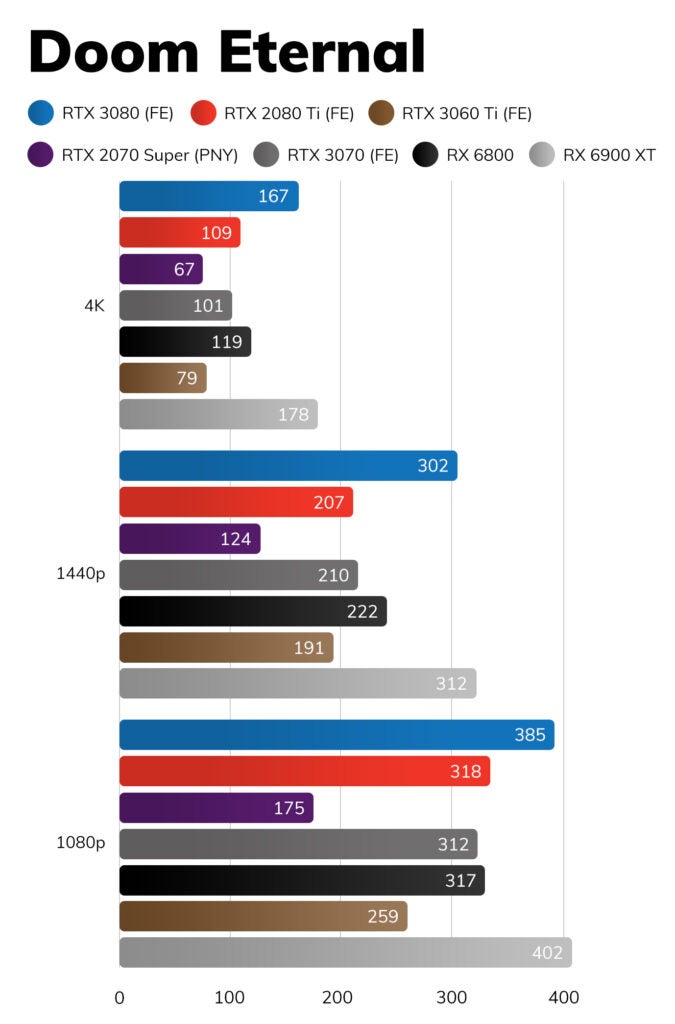 Doom Eternal
Doom is the only game in our benchmarking suite that forces you to run the game in the Vulkan, not DirectX API. It’s a wonderfully optimised game that offers a decent metric to gauge how a GPU will handle most modern triple-A first-person shooters.

The game doesn’t have an internal benchmark so we tested performance by taking an average FPS count running through a section of the opening level. Here the RX 6900 XT offers superb performance at every resolution, offering a near 5% lead over the 3080 in most instances. 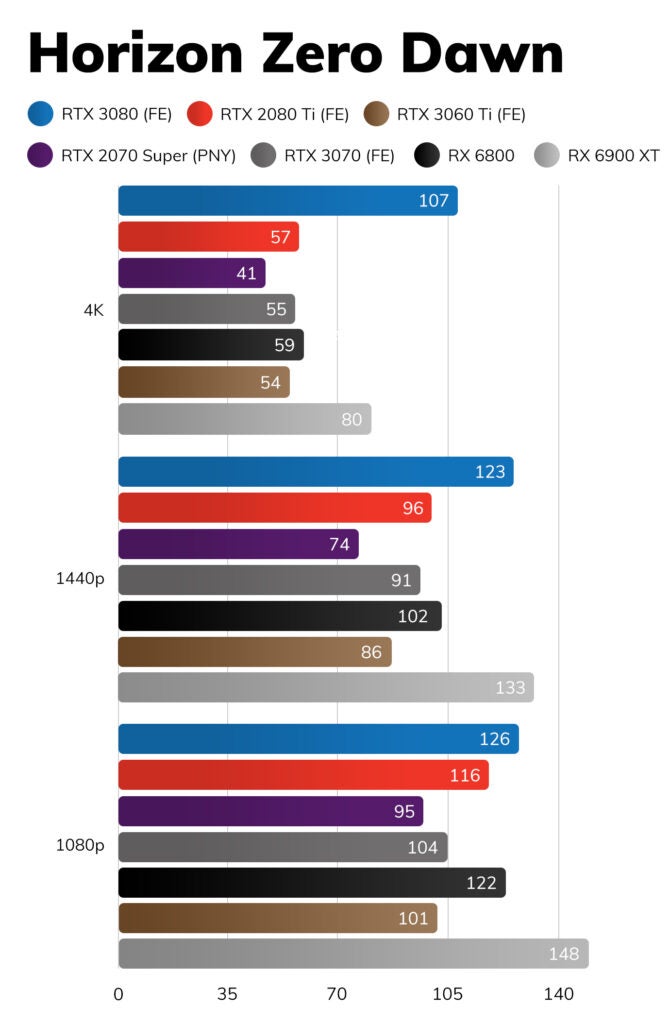 Horizon Zero Dawn
Horizon is a beautiful, but horribly optimised game that started life as PS4 exclusive. Its internal benchmark really stress-tests a GPU, tasking it to render everything from sprawling sci-fi cities and mountain top blizzards in rapid succession.

Here the RX 6900 XT offers stellar performance across the board. Though it’s 4K score is oddly low. Due to time constraints, we haven’t had a chance to determine why. We’ll update this review when we have time. 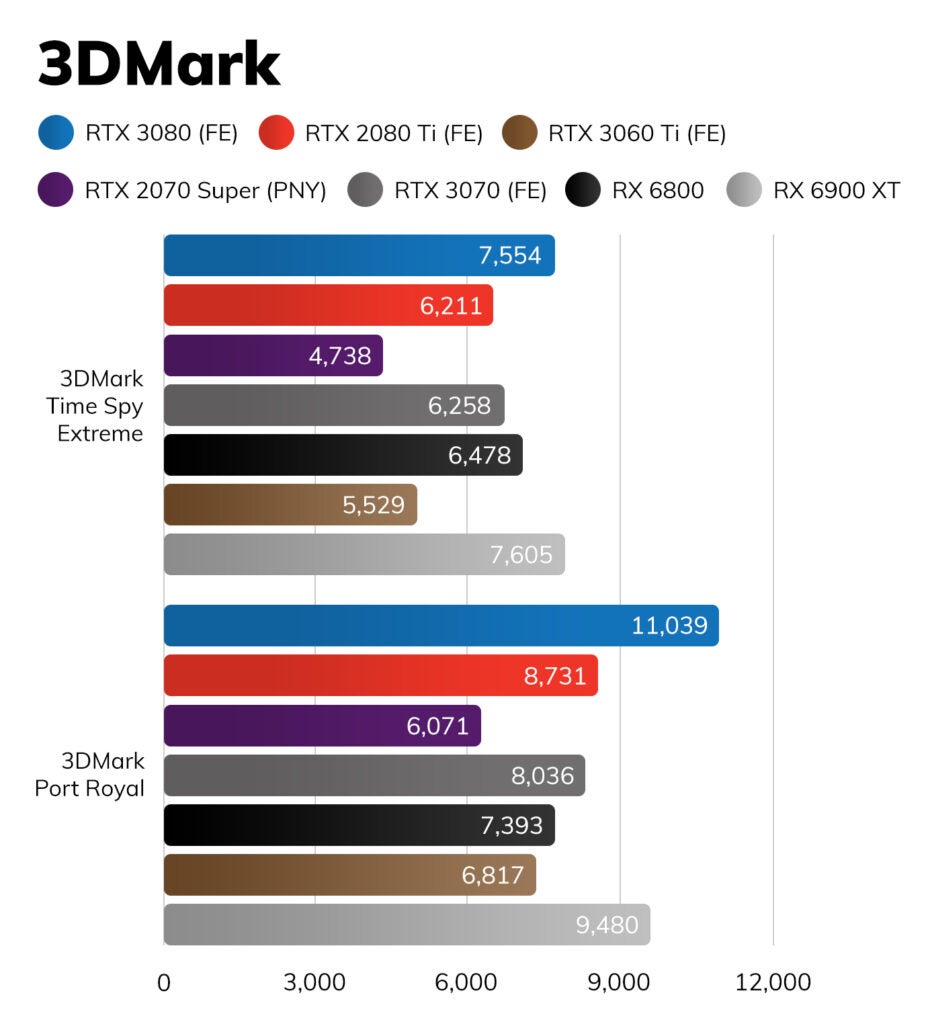 The RX 6900 XT’s score mirrored my real-world findings. The card held a moderate lead over the RTX 3080 in Time Spy, but fell behind in the ray-tracing focussed Port Royal test. 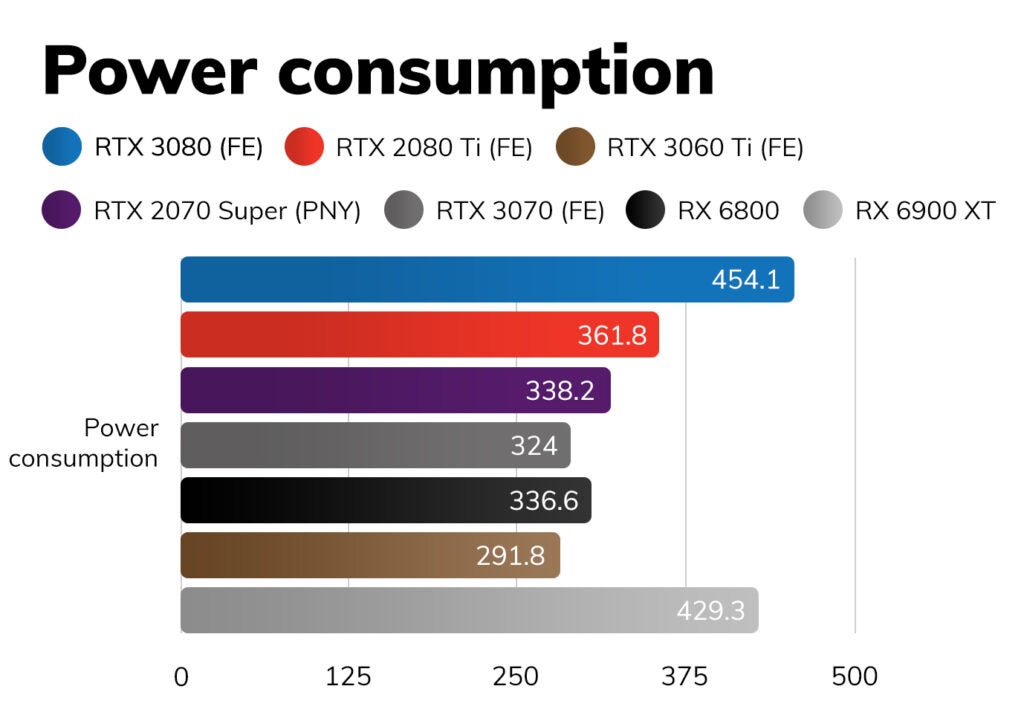 Overclocking, heat and power consumption
AMD’s marketing the RX 6900 XT as an “enthusiast” card with plenty of room for overclocking – one of the only areas Nvidia’s Ampere cards struggle to deliver. Having thoroughly tested the 6900 XT reference review unit, I can personally confirm there’s plenty of truth to this claim.

Overclocking the card I was able to get a stable 2820MHz clock and 2100MHz memory overclock. These represent 14% clock and 5% memory improvements that got me an extra 5-10 frames in Borderlands and Horizon.

These sound small, but considering how rough and ready the overclock was, they indicate there’s still plenty of headroom for third party manufacturers, including Asus, Gigabyte, MSI and PNY to boost the RX6900 XT’s performance with their own versions.

Heat and power consumption are also solid. The card operated at a stable 78 degrees running the Time Spy Extreme stress test and saw a peak 429.3W system power drawer. The latter showing it to be less power-hungry than its Nvidia rivals.

The AMD Radeon RX 6900 XT is a fantastic GPU that delivers excellent 4K performance across the board. This, plus its healthy room for overclocking, make it an enticing prospect for any enthusiast or hardcore gamer.

But its price puts it in an awkward segment of the market. The RX 6900 XT offers superior performance with ray tracing turned off compared to the RTX 3080. But the Nvidia card is cheaper and offers superior ray tracing performance, at the moment. Until AMD’s DLSS solution arrives this will be a key issue. We haven’t had a chance to review the RTX 3090 yet, but it could also offer some competition being more expensive, and on paper more powerful than its AMD rival.