The Nvidia RTX 3060 Ti isn’t the cheapest card on the market, but it’s one of the most affordable options if you want a current generation GPU and the best Ray Tracing choice for any gamer reluctant to make expensive the jump to 4K.

The Nvidia RTX 3060 Ti is one of the cheapest current-generation graphics card in Nvidia’s portfolio. It aims to offer buyers on a budget a more affordable way to enjoy Ray Tracing at playable frame rates in 1080p, with Nvidia quoting it as offering RTX 2080 Super-level performance.

This makes it a fairly important release for Nvidia, with it currently being one of the cheapest graphics card of the new generation, and the most affordable way to enjoy Ampere’s stellar Ray Tracing performance.

But with Nvidia’s performance claims being so bold a mere generation on, you may justifiably be wondering if it rings true with real-world use. We’ve put the Nvidia GeForce RTX 3060 Ti thoroughly through its paces, benchmarking it against all the other current generation cards we could get our mitts on at Trusted Reviews test lab. 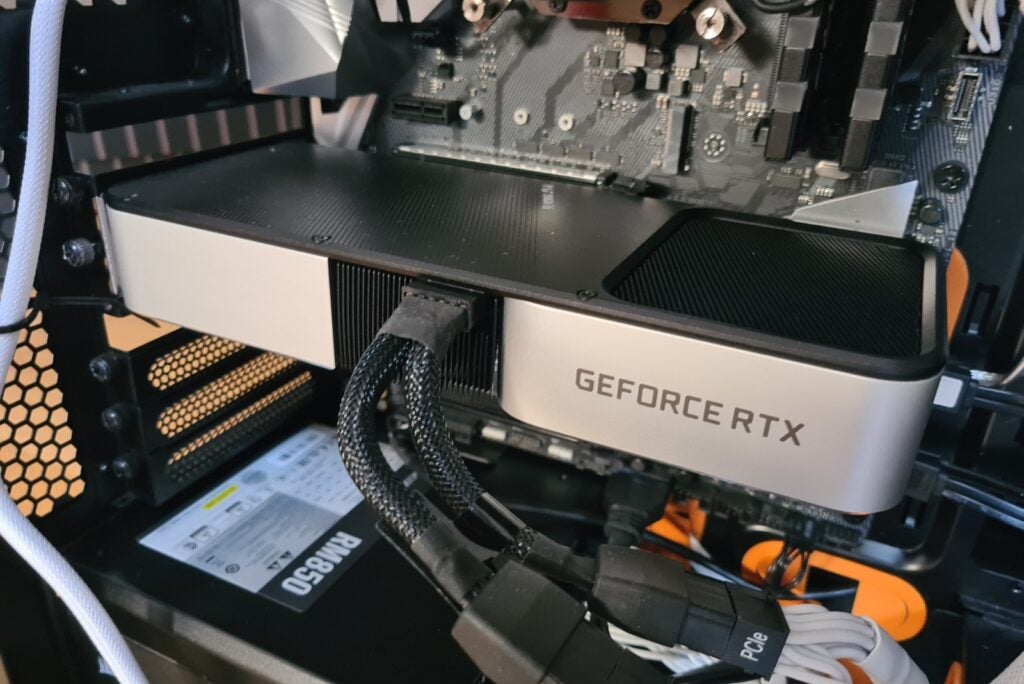 The Nvidia RTX 3060 Ti features a similar dual-fan design to the RTX 3070. This means it uses a custom 12-pin power connector, like all the new 30-series cards. An adapter comes in the box, so you won’t need to swap out your PSU when upgrading, however.

Ports-wise it features the same upgraded HDMI 2.1 connectivity as its other 30-series siblings and three display ports. The primary means the card can theoretically play 4K content at 120Hz and has a wider 48Gbps total bandwidth. The older HDMI 2.0b standard tapped out at 18 Gigabits/secs.

It also sees the same 8GB GDDR6 video memory as the more expensive RTX 3070, but misses on the faster, more expensive, GDDR6x variant seen on the RTX 3080 and RTX 3090 cards. However, at this price that’s hardly surprising and far from a deal breaker considering its focus on 1080/1440p performance.

The big downgrades you get compared to the RTX 3070 and AMD RX 6800 (which are the closest current gen cards to it price-wise) are slower boost and core clock speeds, plus lower Tensor and RT core counts. 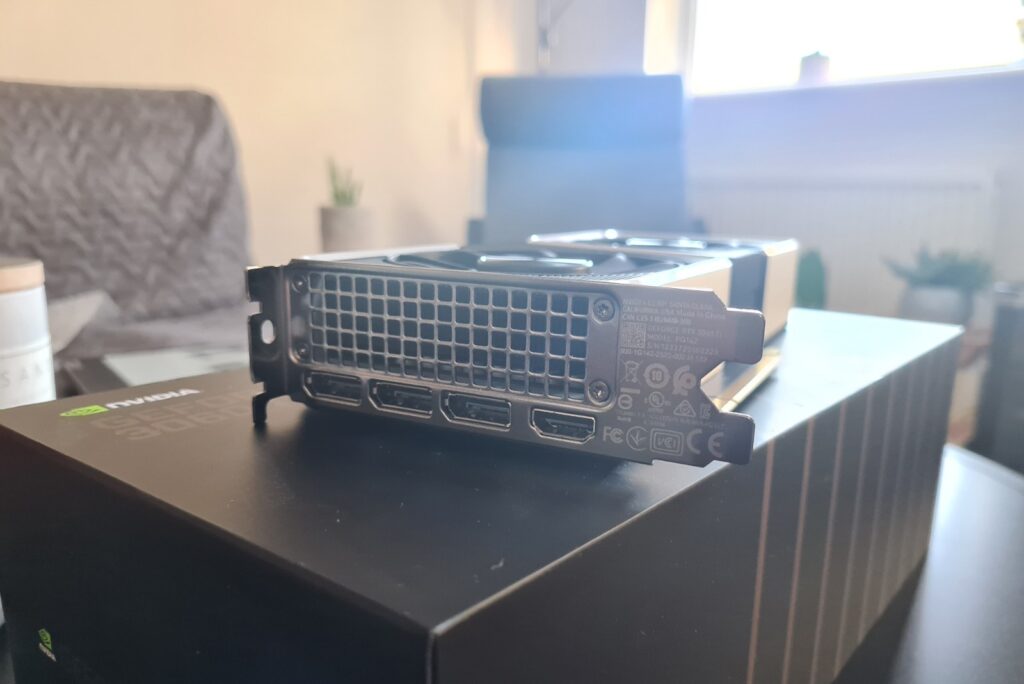 Like all 30-series cards, the RTX 3060 Ti uses third-generation Tensor cores and second-generation RT cores. This is a key reason it’s able to, according to Nvidia, outperform older and significantly more expensive 20-series cards which use the previous generations of the technologies.

The benefit of the lower specs is that the 3060 Ti is significantly less demanding to run than its more expensive siblings, coming with a 200W TDP. This means you’ll be able to run it on lower power PSUs, making it a solid choice for more affordable, or microATX, builds. Sadly the dual-fan design means you’ll likely still struggle to fit it into a mini ITX case without some very clever cable management or modding.

You can see a quick glance breakdown of how the RTX 3060 Ti’s core specs compare to other current generation graphics cards in the table below.

Nvidia’s made some pretty bolshy claims about the RTX 3060 Ti’s performance. Specifically, Nvidia’s quoting it as offering framerates on a par with the older RTX 2080 Super, a card that cost nearly twice as much when it first launched. If accurate, this would make it one of the best options for gamers on a budget looking for ultimate 1080p Ray Tracing performance.

To test the claim we ran the 3060 Ti through a series of synthetic and in-game tests using a rig with the below components.

Every game we tested had its graphics settings maxed out. You can see how it performed in each test below. 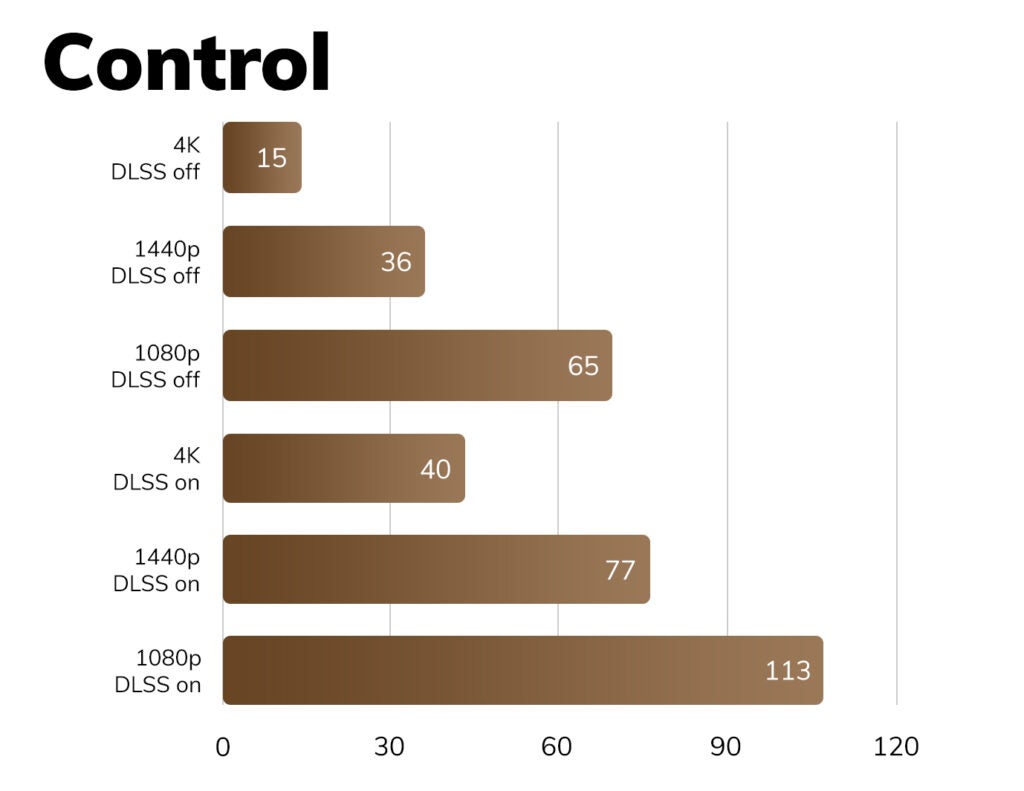 Control
Control is viewed as one of the best gauges to tell how a graphics card will handle Ray Tracing and DLSS. It’s a beautiful game full of complex physics and demanding, highly reflective environments. The game doesn’t have an inbuilt benchmark so we tested the performance by taking an average frame rate count running through a demanding section of the game, set in an office environment full of reflective windows and advanced lighting effects.

Here the 3060 Ti’s performance rang true with Nvidia’s claims. The card offered solid, playable frame rates with Ray Tracing and DLSS turned on in every resolution except 4K. This is largely because the game’s settings automatically lower the render resolution quite substantially with DLSS on.

Performance quickly drops with DLSS off, however. With Ray Tracing off, the card ran control over 60fps in everything but 4K. 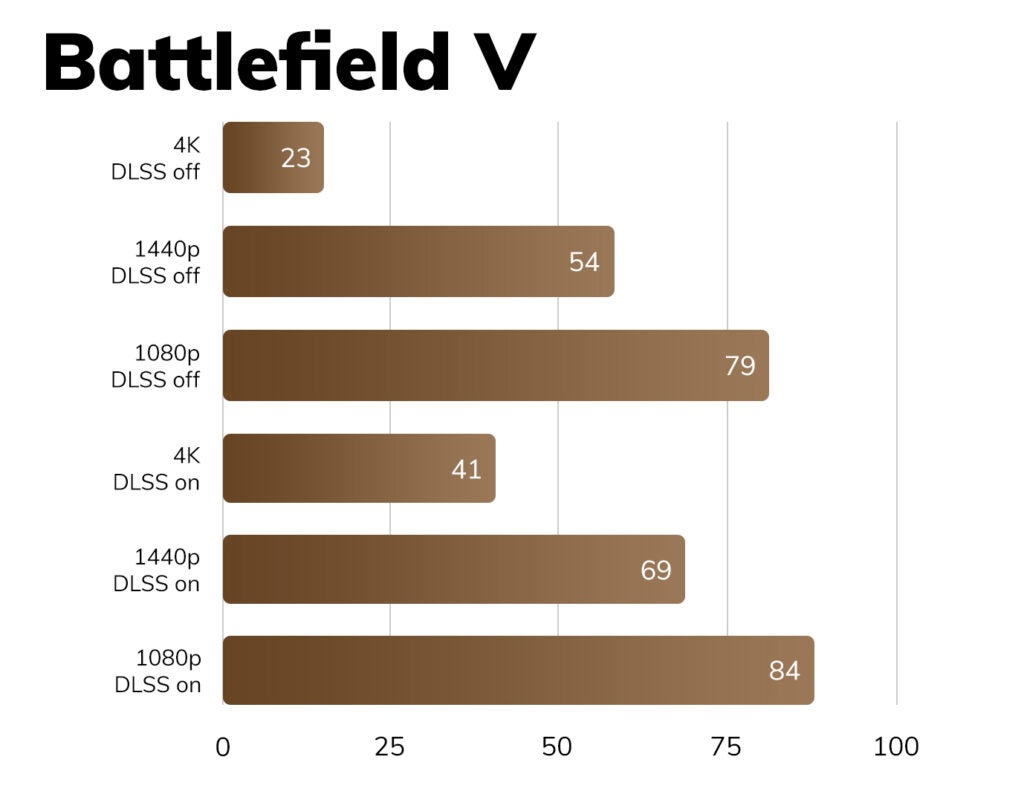 Battlefield V
Battlefield V was one of the first games to support Ray Tracing, and it remains a great benchmark to judge how a graphics card will handle the tech. It’s a large sprawling multiplayer game full of moving parts and massive explosions and light effects.

Like Control, it doesn’t have an inbuilt benchmark so we measured performance by taking an average frame rate while running through a specific section of the Nordalis War Story.

Here again the 3060 Ti offered solid, post 60fps frame rates with Ray Tracing and DLSS turned on in everything but 4K. The game also surpassed the hallowed 60fps milestone at every resolution with Ray Tracing turned off. 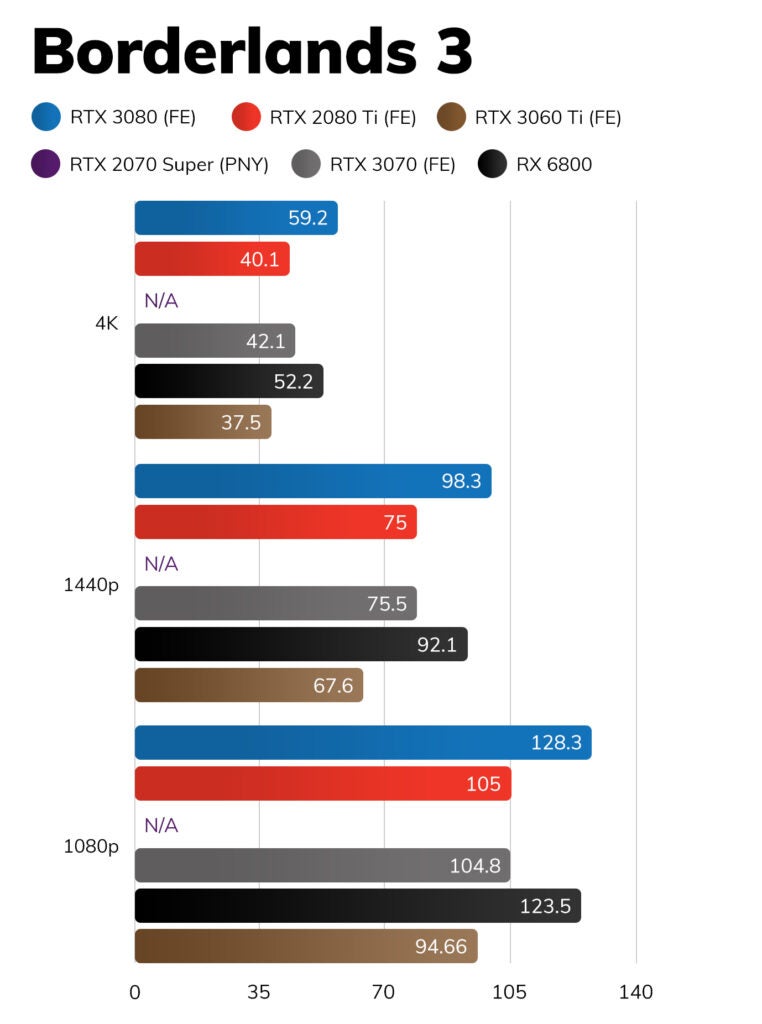 Borderlands 3
Borderlands 3 is a title optimised for AMD hardware. It doesn’t support Ray Tracing or DLSS, but it remains a demanding title. It requires the GPU to render a large sprawling open world full of AI enemies, high quality textures, plus demanding explosion and light animations/effects.

Running the game’s inbuilt benchmark the 3060 Ti once again managed to play the game at post 60fps in everything but 4K. 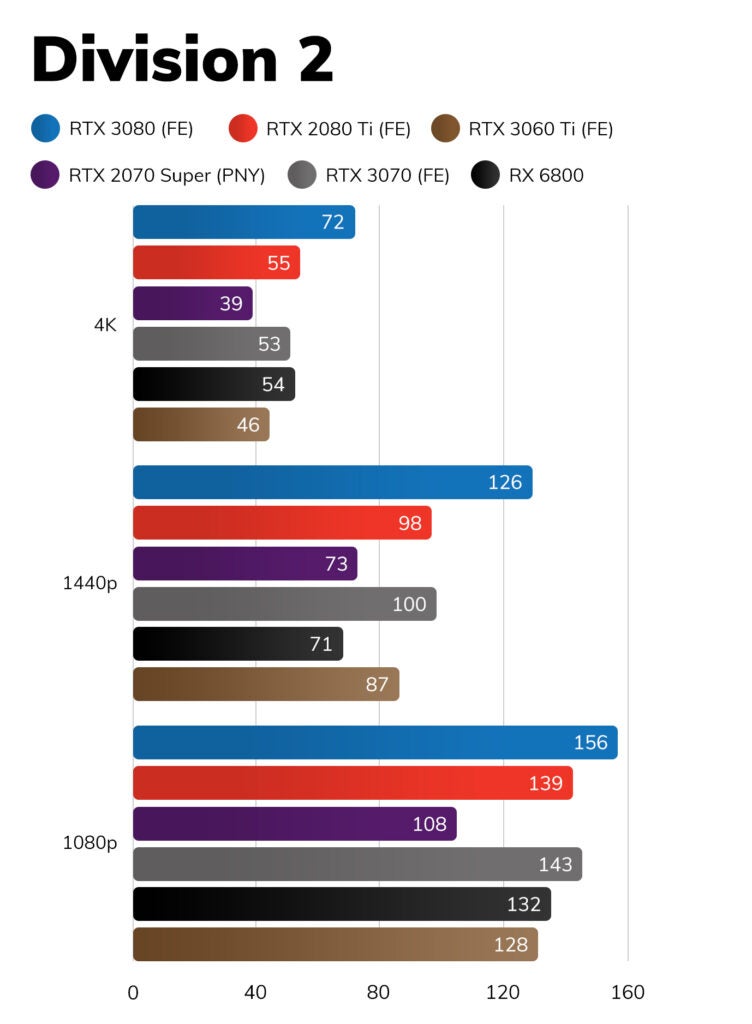 The Division 2
The Division 2 is an open world shooter set in a huge city. It’s not the most demanding game in our test suite, but its internal benchmark is a good metric to gauge how a GPU will run most current live service games.

Here the 3060 Ti offers great performance across every resolution, delivering post 60fps results in everything but 4K. 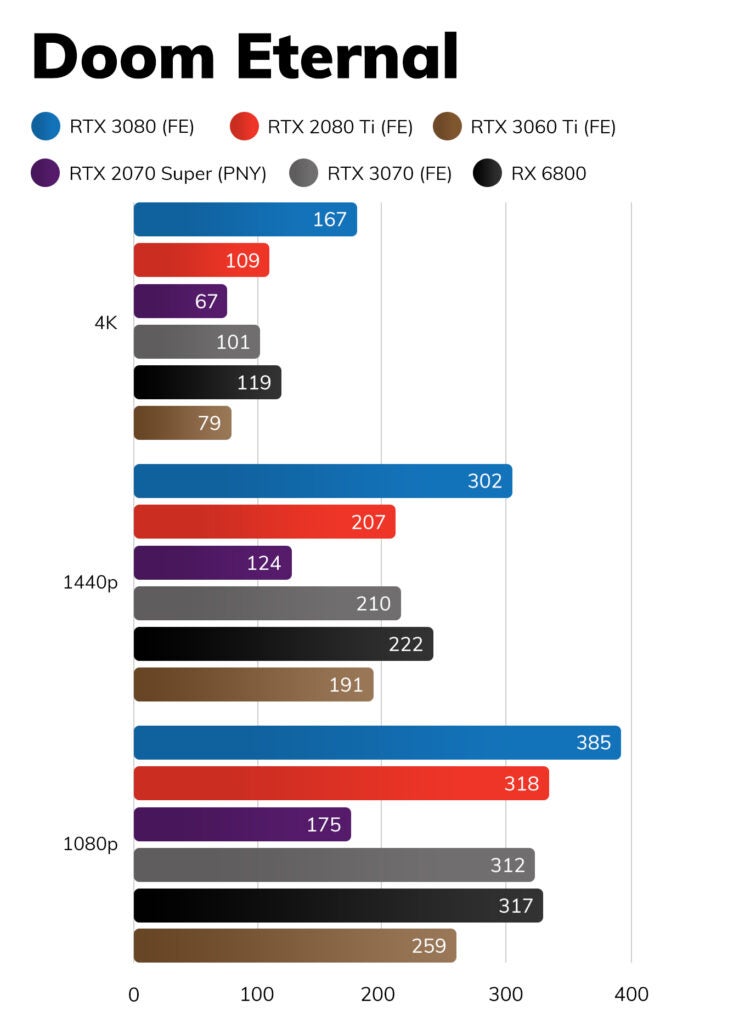 Doom Eternal
Doom Eternal is one of the only games in our test suite that forces you to run it in the Vulkan, not Direct X API. This means it doesn’t feature Ray Tracing or DLSS support. It doesn’t feature an internal benchmark so we gauge performance by taking an average frame rate count while running through the opening part of its first level. The 3060 Ti proved powerful enough to run the game at super fast post 60fps speeds in every resolution including 4K. 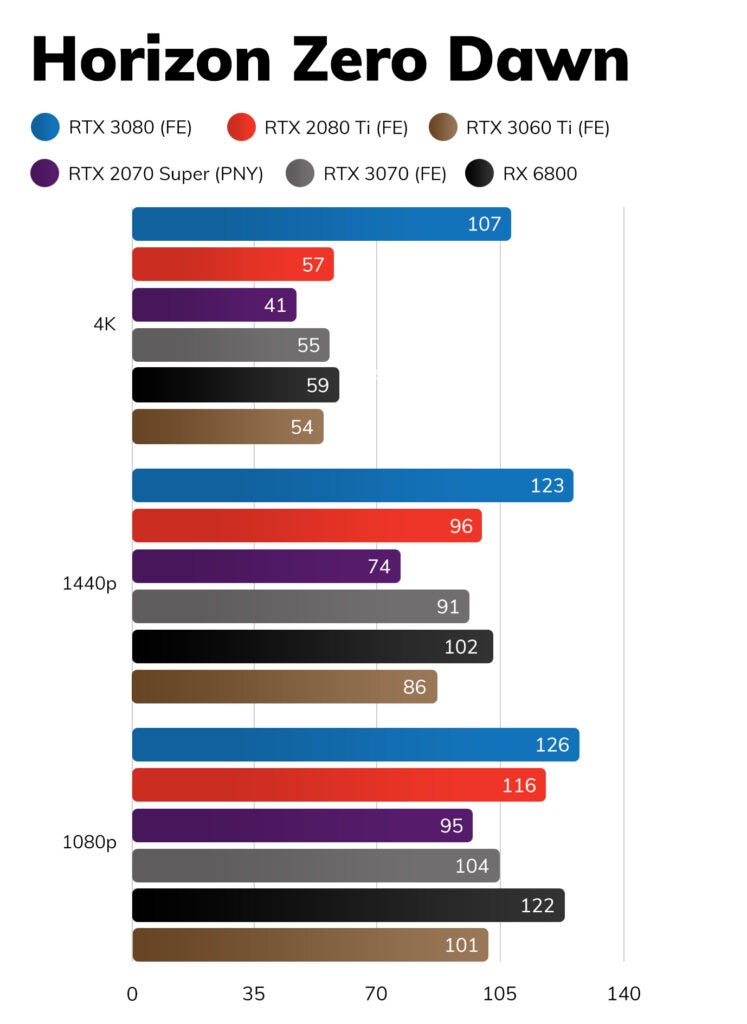 Its internal benchmark test tasks the GPUs with rendering everything from busy city scenes to thundering snow storms. The 3060 Ti delivered playable frame rates across the board running the test, falling just short of 60fps in 4K. 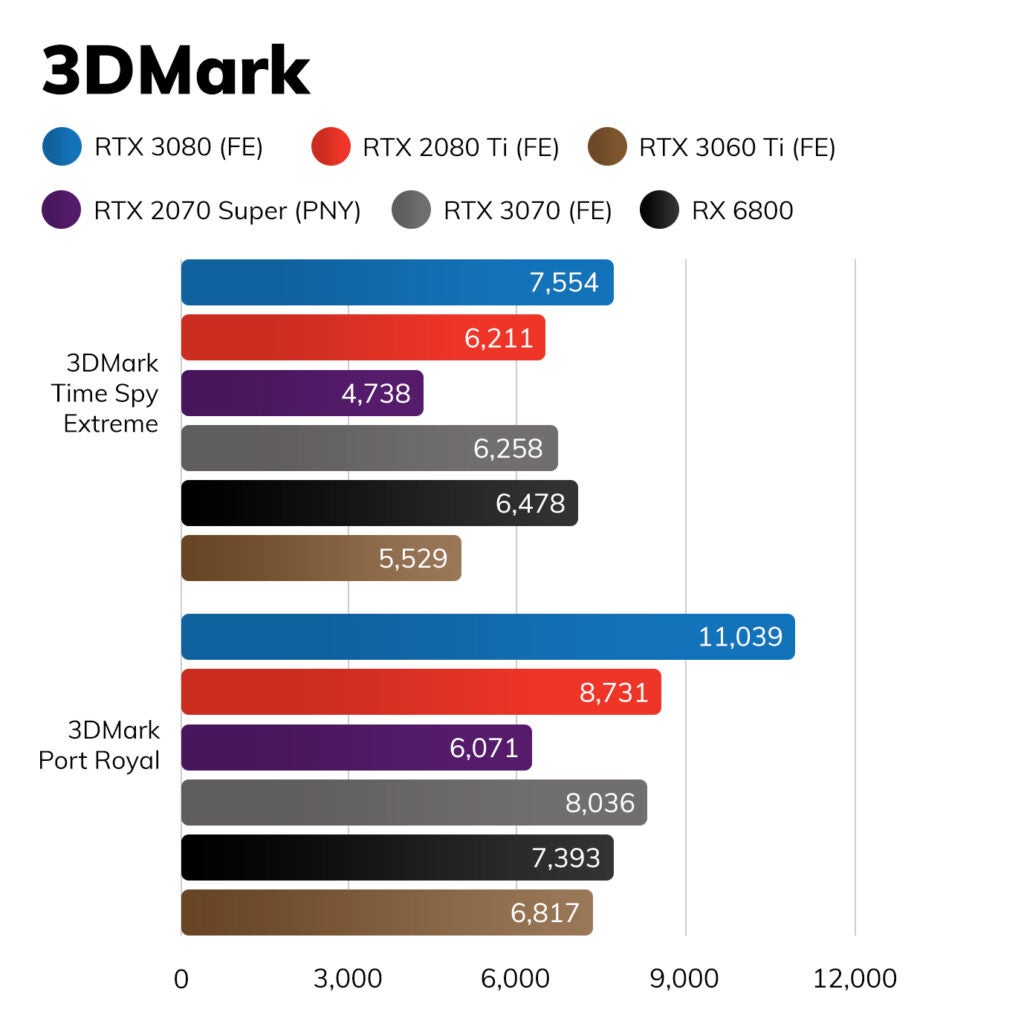 3DMark
3DMark is a benchmark suite that tests a GPUs performance using a variety of synthetic tests. Time Spy Extreme is designed to test its Direct X 12 performance in 4K. Port Royal aims to gauge its Ray Tracing chops.

In both tests a higher score is better. Here the 3060 Ti’s scores were in line with Nvidia’s claims, with it sitting behind the 3070. 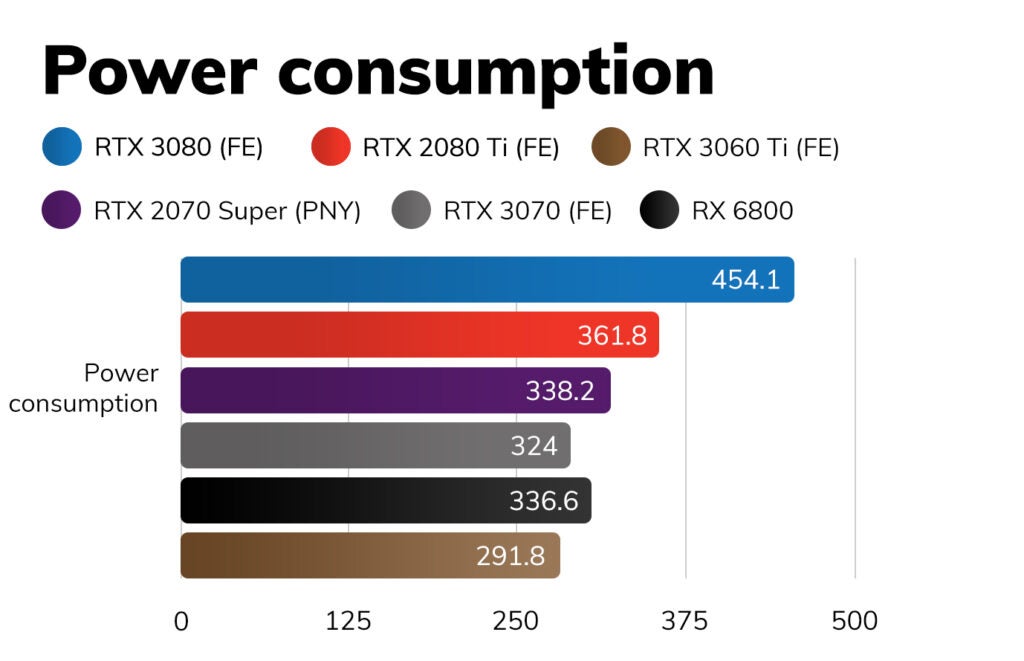 High power consumption and little head-room for overclocking are two key issues I had testing the RTX 3080 and 3070. Thankfully, the primary has generally been fixed on the 3060 Ti which is the least demanding card in Nvidia’s current generation.

Running Time Spy Extreme, I detected a peak system draw of 291.8W, making it the least demanding of the new 30-series cards. Heat was also reasonably stable with the card running at around 73 degrees running the Time Spy Extreme stress test.

The 3060 Ti also has the most head room for overclocking, though it’s still not industry leading in the area. Doing a rough and ready OC in MSI Afterburner with the Time Spy Extreme stress test I managed to get 170MHz clock speed and 160MHz memory overclocks. After that, the test started crashing. 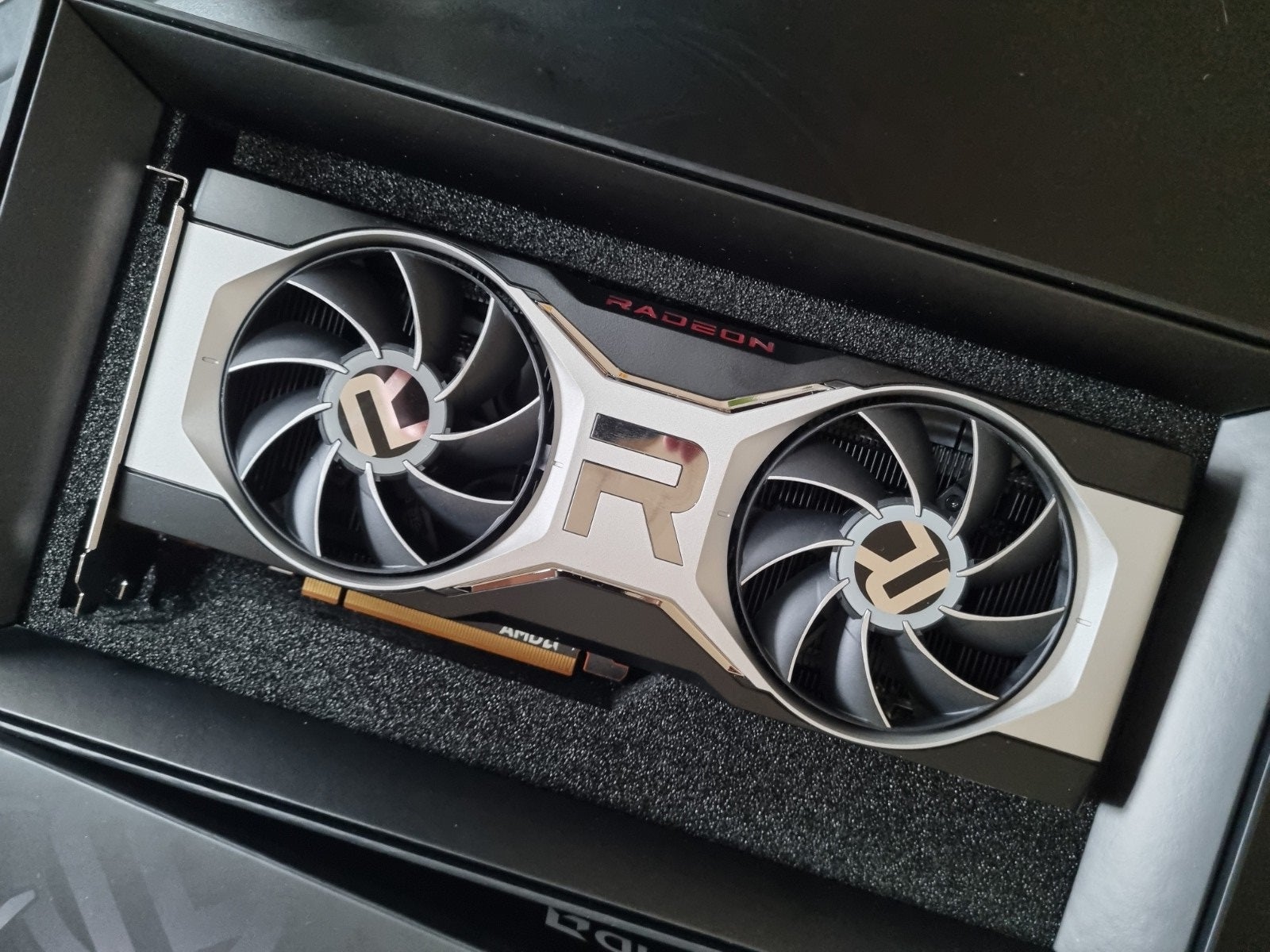 The Nvidia GeForce RTX 3060 Ti is a new graphics card for gaming that targets a 1080p performance, while supporting features such as DLSS and ray tracing.

What is the Nvidia RTX 3060 Ti Founder’s Edition?

The Founder’s Edition is the vanilla model designed and sold by Nvidia directly. There are also third-party models of the RTX 3060 Ti from the likes of Asus, Gigabyte and MSI that can see a tweaked design, improved airflow and an overclocked performance.

The ‘power supply unit’ converts mains AC to low-voltage regulated DC power for the internal components of a computer.